Following an eventful and well-deserved break, the MotoGP™ field will reunite at the famous Brickyard for the Red Bull Indianapolis Grand Prix this weekend to once again battle it out for on-track supremacy.

The biggest news ahead of the second U.S. race was that Ducati Team’s Valentino Rossi will be switching back to the Factory Yamaha Team at the end of the season on a two-year deal. This has ended the huge speculation around the Italian’s future, yet has created new hype around who will be filling the vacant spot in the Bologna outfit’s team.

Looking solely towards the on-track action, Yamaha’s current championship leader Jorge Lorenzo will be aiming to extend his lead at the top of the table at a track where he took victory in 2009. Last year the Spanish rider struggled at the track, yet looks in ominous form at the moment, which will make him one of the favourites to take victory. Repsol Honda Team’s Dani Pedrosa and Casey Stoner will however be challenging from the off, with Stoner in particular good form after his terrific performance in Laguna Seca last time out. The Australian also took victory at Indianapolis last year ahead of Pedrosa in second.

Monster Yamaha Tech 3’s Andrea Dovizioso heads to Indianapolis looking to add to his podium tally this season, whilst holding off the challenges from his teammate Cal Crutchlow, who is still chasing his first step on the MotoGP rostrum. LCR Honda MotoGP’s Stefan Bradl on his satellite Honda RC213V, currently lying sixth in the championship tied on points with Ducati’s Nicky Hayden, will look to close the gap to Crutchlow and continue to improve in his maiden premier-class season. American Hayden on the other hand will not want to be beaten by a rookie, and will be firing on all cylinders as he tackles his home race.

His teammate Rossi, with his future now confirmed, will however not be taking things lightly, and will look to put in a better showing than at Laguna Seca, where he crashed out on the final lap. San Carlo Honda Gresini’s Álvaro Bautista, who has finished behind Bradl in the last three races will aim to finish as top satellite Honda once more and rekindle some of the form that saw him take pole and fourth place at Silverstone earlier this year. Yamaha’s Ben Spies, who suffered a suspension failure last time out, will hope for a serious turn of fortunes as he heads to the track where he came third last year.

Pramac Racing Team’s Héctor Barberá has not recovered from his broken fibula and tibia in time and will again be replaced by fellow compatriot Toni Elías. Other Ducati satellite rider Karel Abraham, on board his Cardion AB Racing Desmosedici, will be fully fit on the other hand, and no doubt hopeful of finishing with a much needed good result.

The CRT contingent make their first visit to the U.S. track with Power Electronics Aspar duo of Randy de Puniet and Aleix Espargaró tied on 33 points at the top of the pack. They will be joined by San Carlo’s Michele Pirro, Speed Master’s Mattia Pasini, Paul Bird Motorsport’s James Ellison, Came IodaRacing Project’s Danilo Petrucci and Avintia Blusens pair of Yonny Hernandez and Iván Silva. NGM Mobile Forward Racing’s Colin Edwards, who had fuelled speculation that he may be lining up on a new bike, will be contesting the race on-board his Suter-BMW machine. Attack Performance, who failed to qualify for Laguna Seca with rider Steve Rapp, will be back for its second wildcard entry at the Brickyard, and will be joined by Aaron Yates riding a GPTech CRT bike with a BCL chassis and a Suzuki GSX-R1000 engine.

After nearly five weeks off, the Moto2™ grid will once again be rearing to go as the intermediate-class descends on the famous Brickyard for the Red Bull Indianapolis Grand Prix.

Team CatalunyaCaixa Repsol’s Marc Márquez heads to the U.S. with a sizeable 34-point lead at the top of the championship standings, and will once again be one of the favourites at the circuit where he won last year. The Spaniard, along with Interwetten-Paddock’s fellow Suter rider Tom Lüthi, did not relax completely during the summer break, as they both carried out vital tests at Portugal’s Portimão circuit to prepare for the second half of the season.

The main rivals heading into the race will be Speed Master’s Andrea Iannone, fresh off his win in Mugello, and Pons 40 HP Tuenti’s Pol Espargaró, who are both tied on points behind Márquez. Espargaró will have fond memories of the Indianapolis track, as it was there that he took his first ever Moto2 podium last year in second. Marc VDS Racing Team’s Scott Redding, who tested a MotoGP™ Ducati bike during his time off, will be aiming for his third podium spot this season, whilst holding off the challenge from his teammate Mika Kallio.

Tech 3 Racing’s Bradley Smith, who just missed out on a podium at the Brickyard last year will hope his surge in form continues at the track, and that he can snatch his first rostrum of the season. Italtrans Racing Team’s Claudio Corti and Technomag CIP’s Dominique Aegerter will however look to mix it up at the front once more, with Espargaró’s teammate Esteve Rabat likely to challenge as well. Rabat has a good record at the circuit, having taken third place last year.

The Moto2 line up also sees some changes, with Spaniard Jordi Torres filling the vacant Mapfre Aspar Team seat, which became available after the departure of Toni Elías. Marcel Schrötter is a permanent replacement for Massimo Roccoli in the Desguaces La Torre SAG team, whilst the entry list sees wildcard Tommy Aquino scheduled to make an appearance on the Fogi Racing team FTR.

The Moto3™ contingent heads to the Red Bull Indianapolis Grand Prix after a five-week absence this weekend to once again light up the track with its intense on-track battles.

Red Bull KTM Ajo’s Sandro Cortese holds a narrow nine-point lead over Blusens Avintia’s championship favourite Maverick Viñales, as the two continue their tussle up-front. Last year the Spaniard got the better of the German as they both occupied second and third spot on the rostrum, and no doubt Viñales will be looking to do the same this time round to claw back some points.

RW Racing GP’s Luis Salom will aim to overcome his disappointment of not finishing the last race in Mugello with a solid performance, while Team Italia FMI’s Romano Fenati will be buoyed by his spectacular second place last time out.

Caretta Technology’s Alexis Masbou, who only recently took his first Grand Prix podium, will hope to rekindle some of that form after a disappointing race in Mugello. AirAsia-SIC-Ajo’s Zulfahmi Khairuddin will be one to watch at the Brickyard, after stating during the summer break that his sights were firmly set on taking his first career rostrum in the second part of the season. Estrella Galicia 0,0’s Alex Rins will aim for further steady progression in his maiden Moto3 season, while Racing Team Germany’s Louis Rossi will look to make up for his DNFs at the last two rounds.

There have been numerous changes in the Moto3 line-up, with Alex Márquez, younger brother of Moto2™ rider Marc Márquez, replacing Simone Grotzkyj at Ambrogio Next Racing, and Armando Pontone coming in to replace Jonas Folger in the IodaRacing Project team. Folger, in turn, has moved to Mapfre Aspar Team Moto3 after it parted ways with Spaniard Alberto Moncayo. Moncayo however, will be replacing the injured Iván Moreno at the Andalucia JHK Laglisse team for the Indianapolis race. 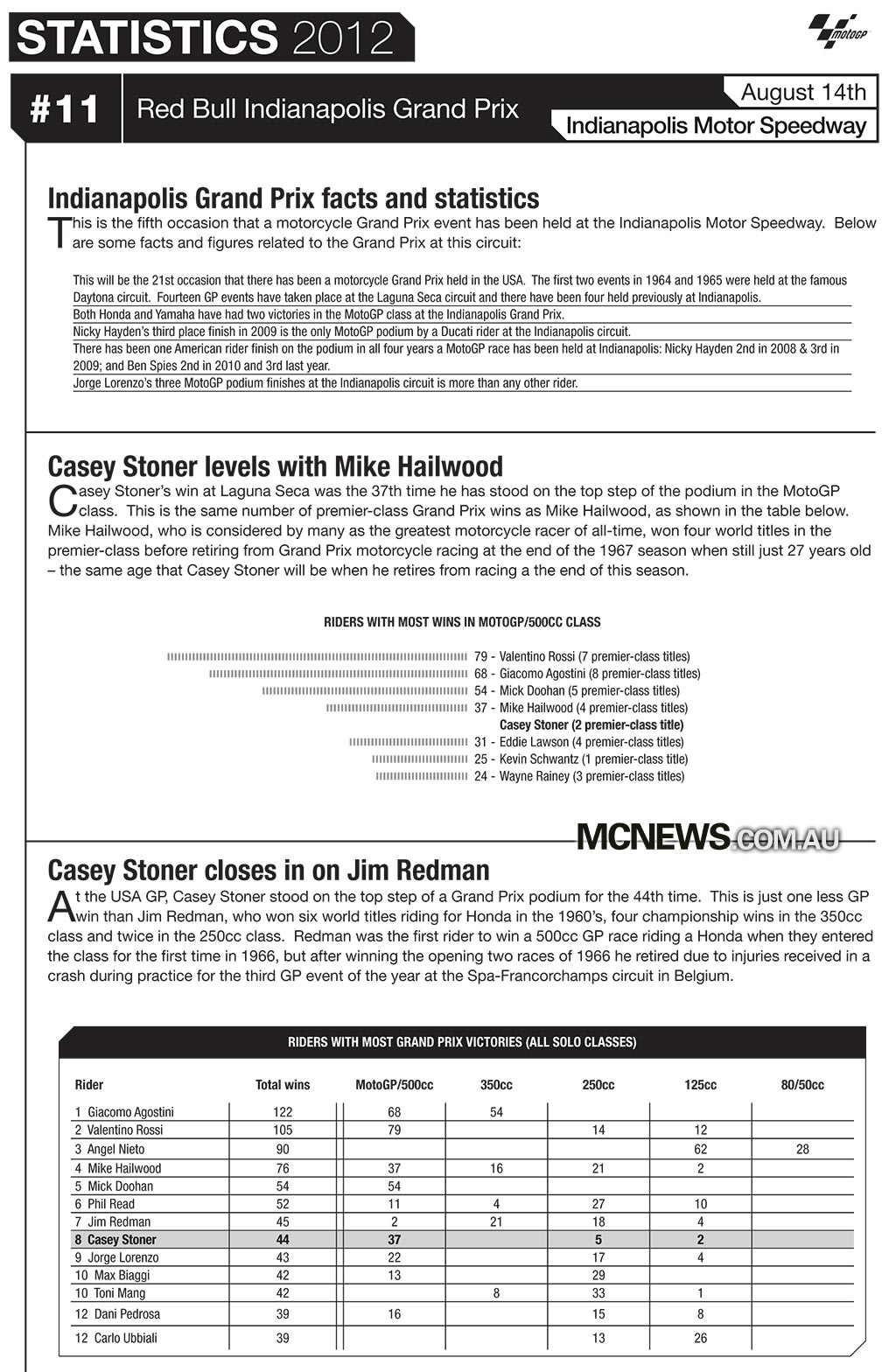 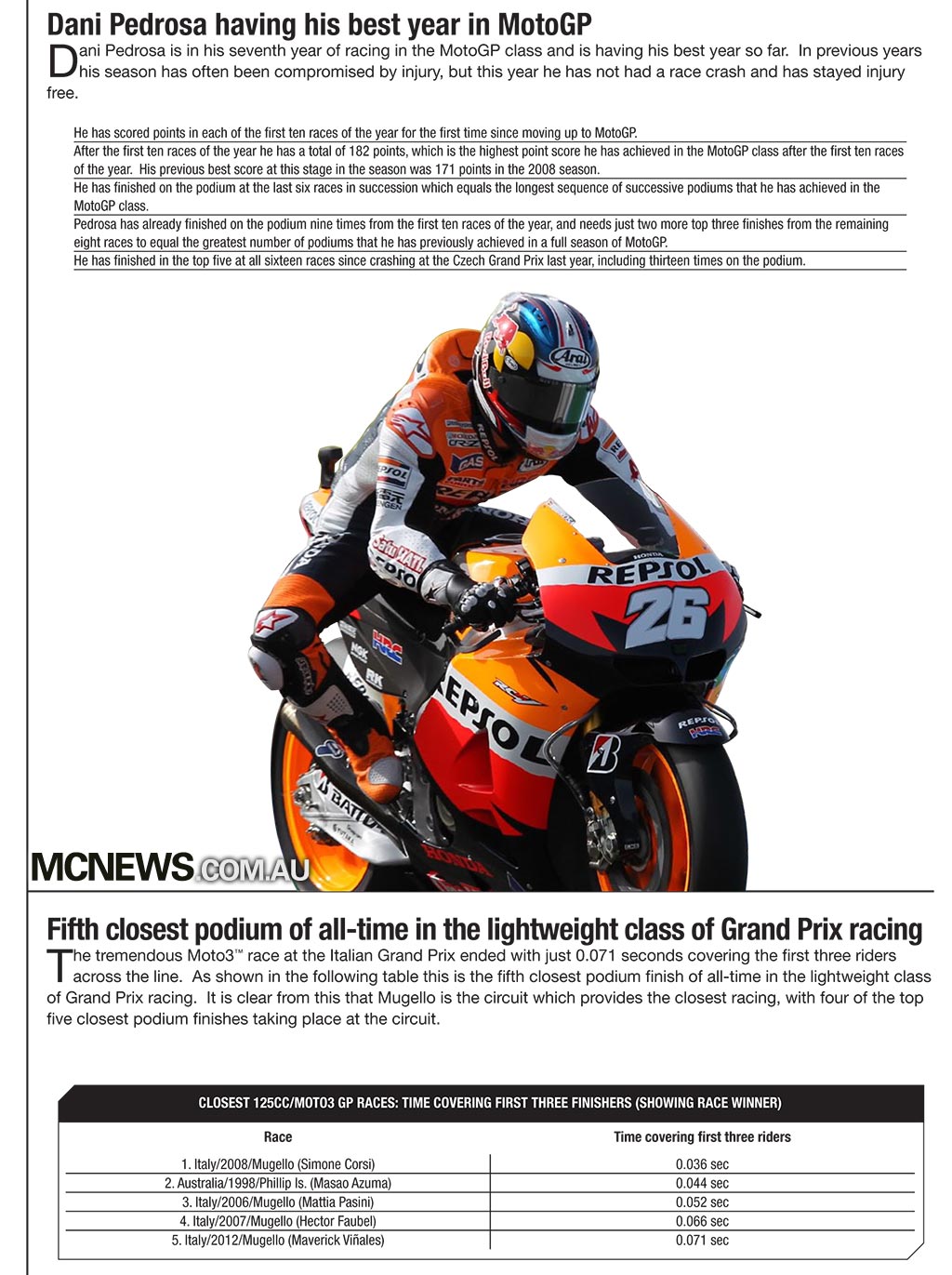 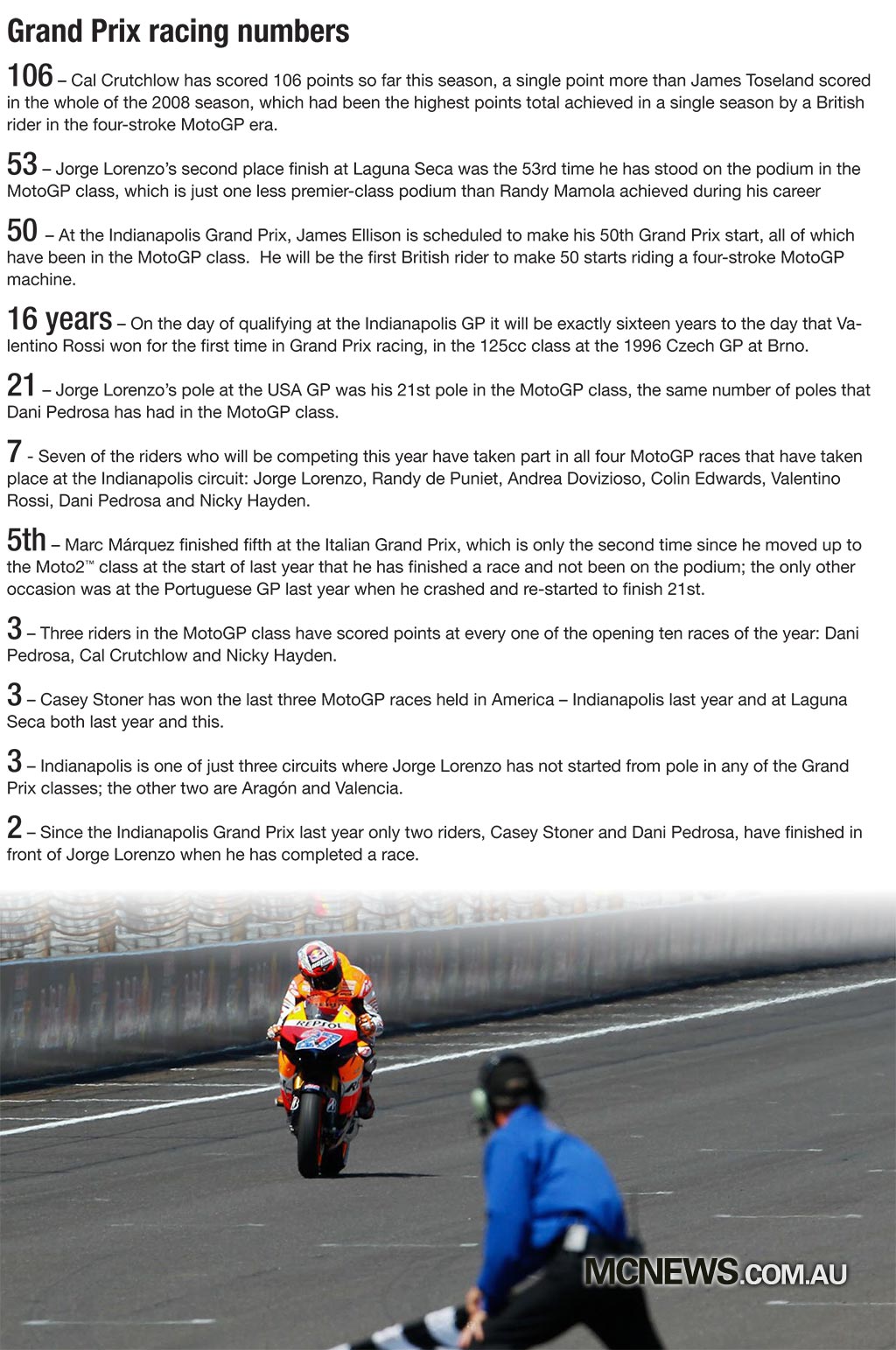 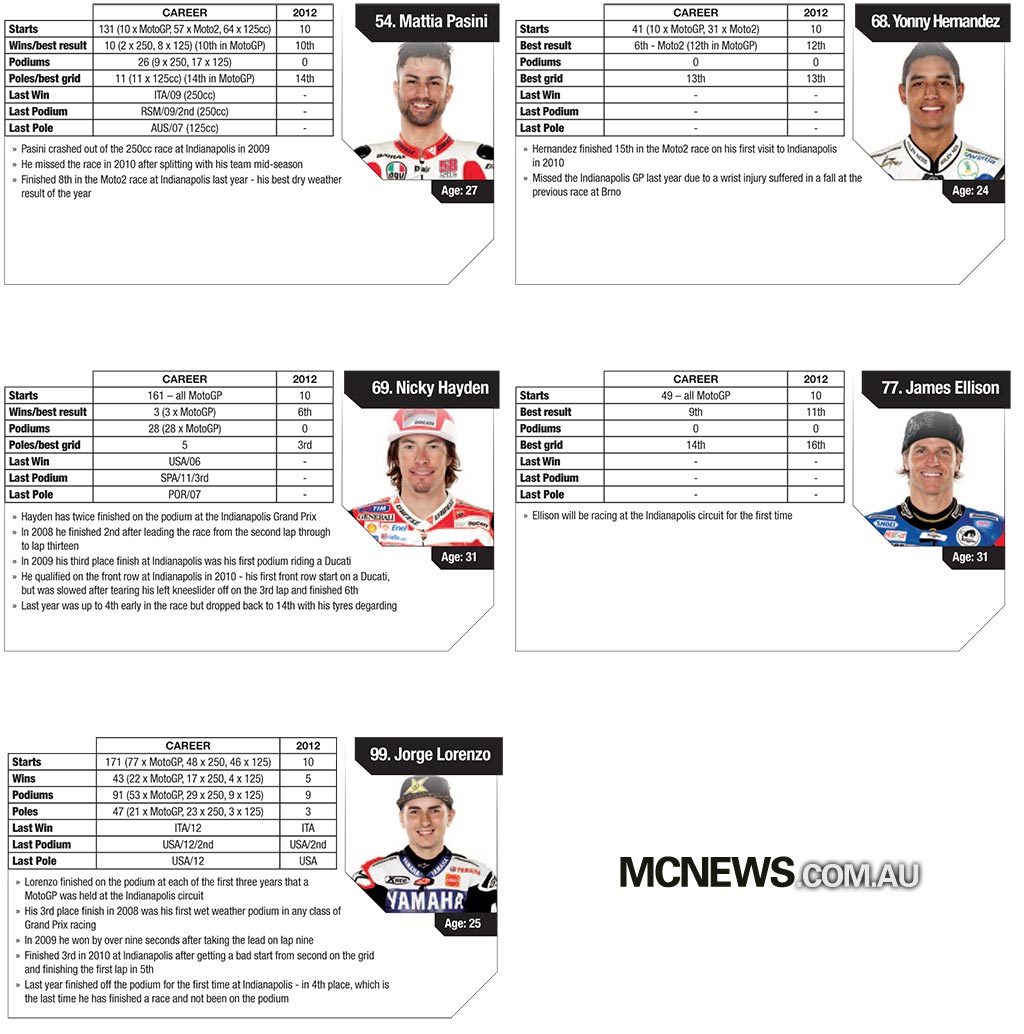 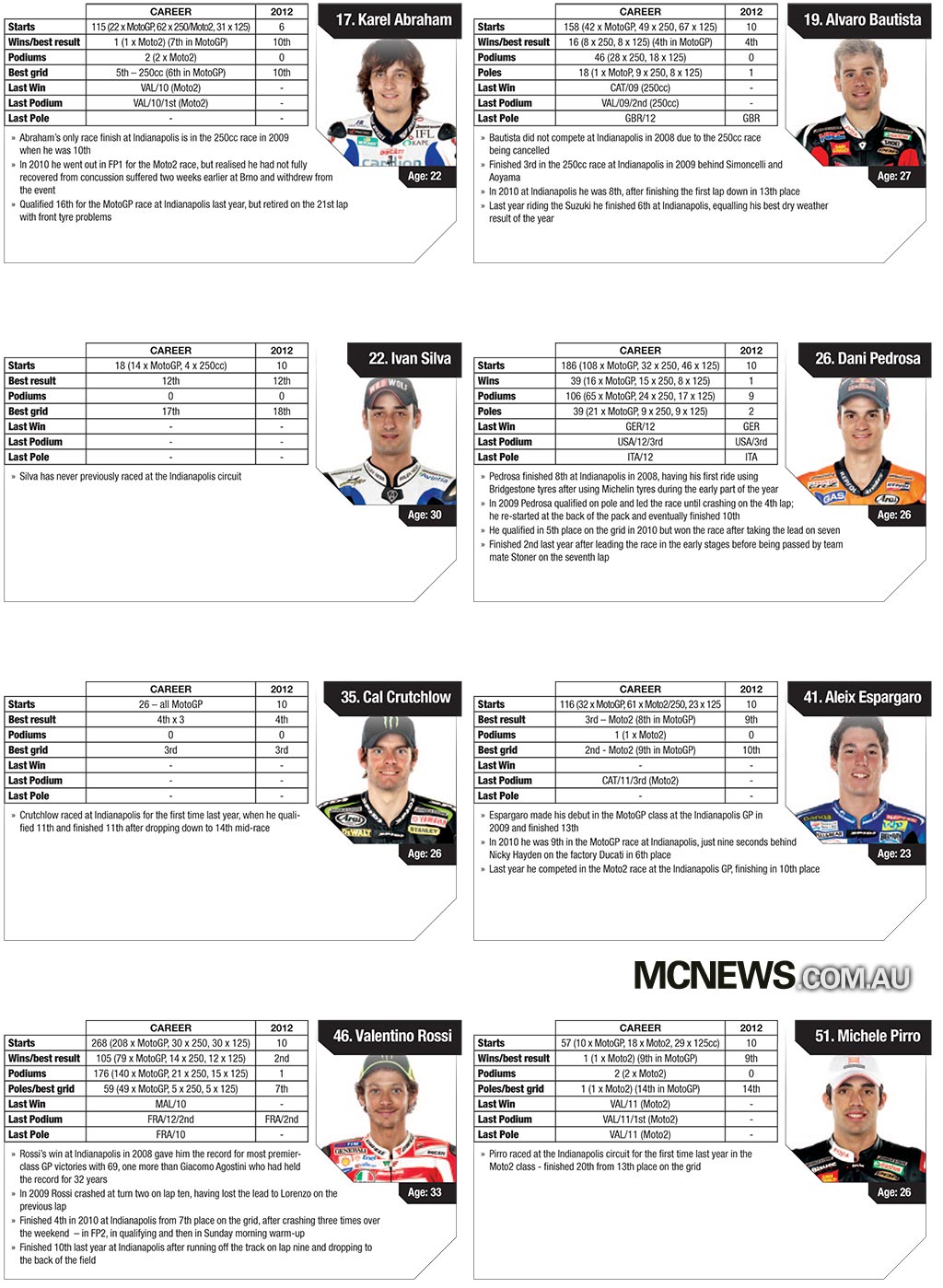 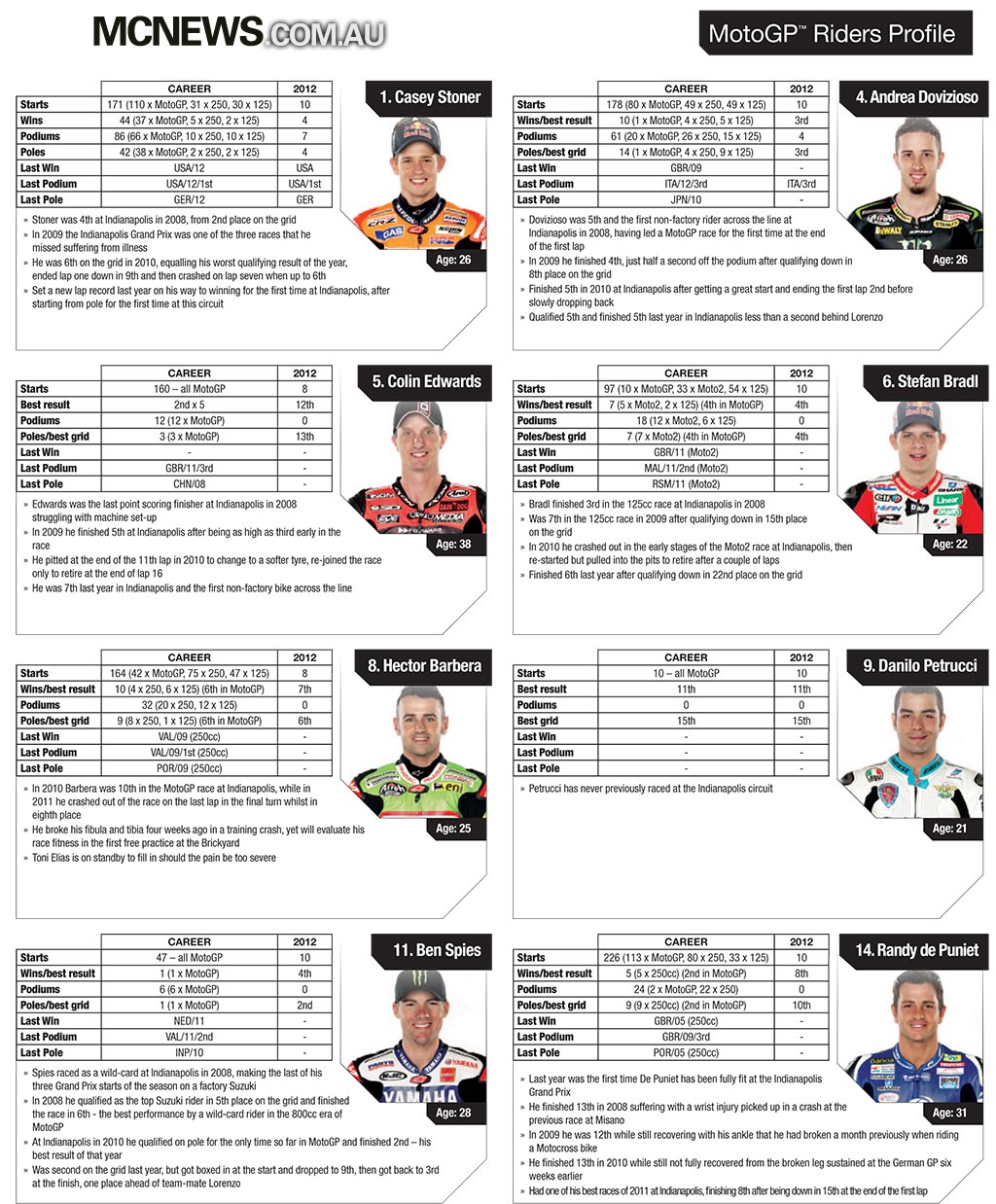 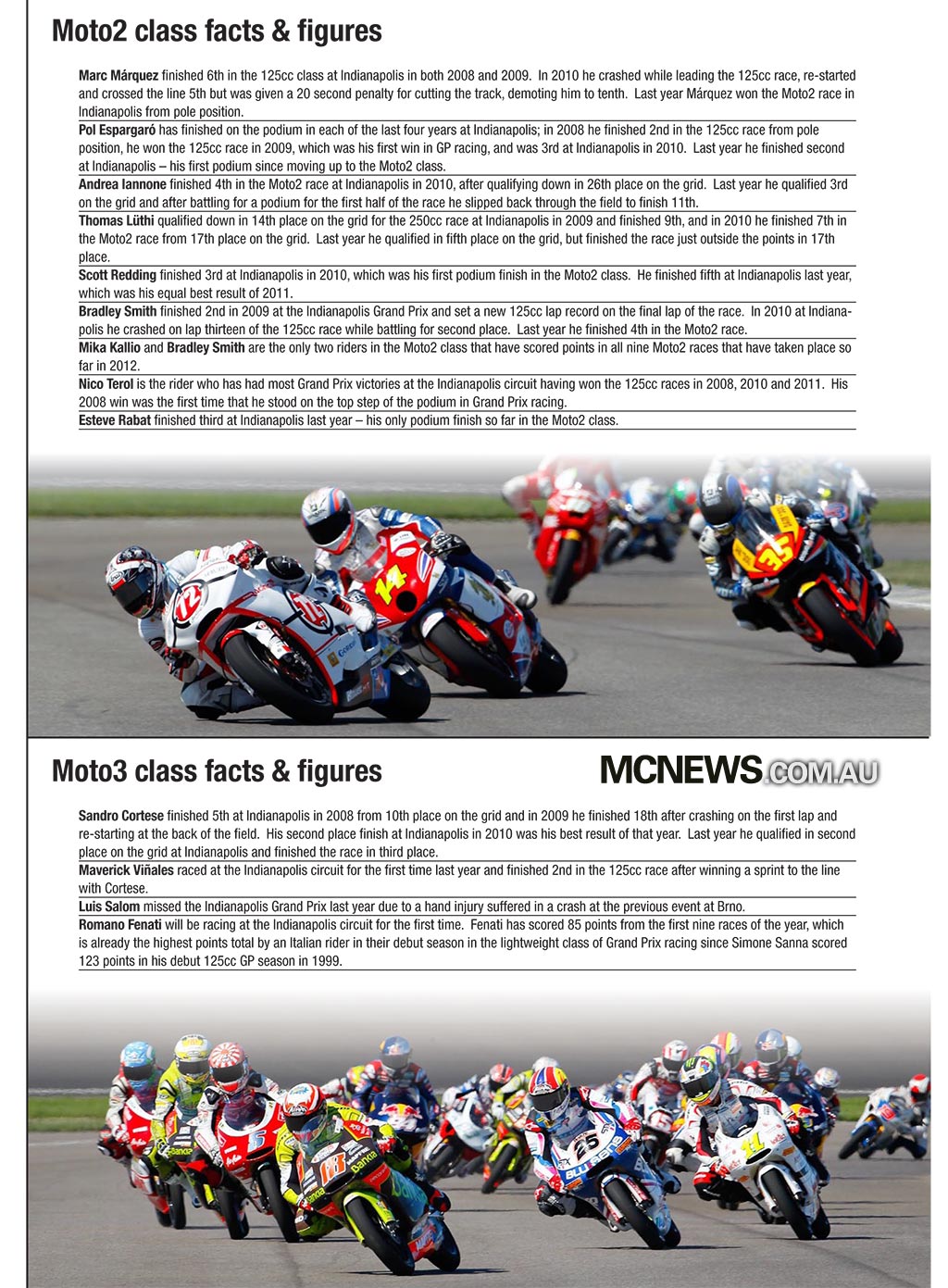