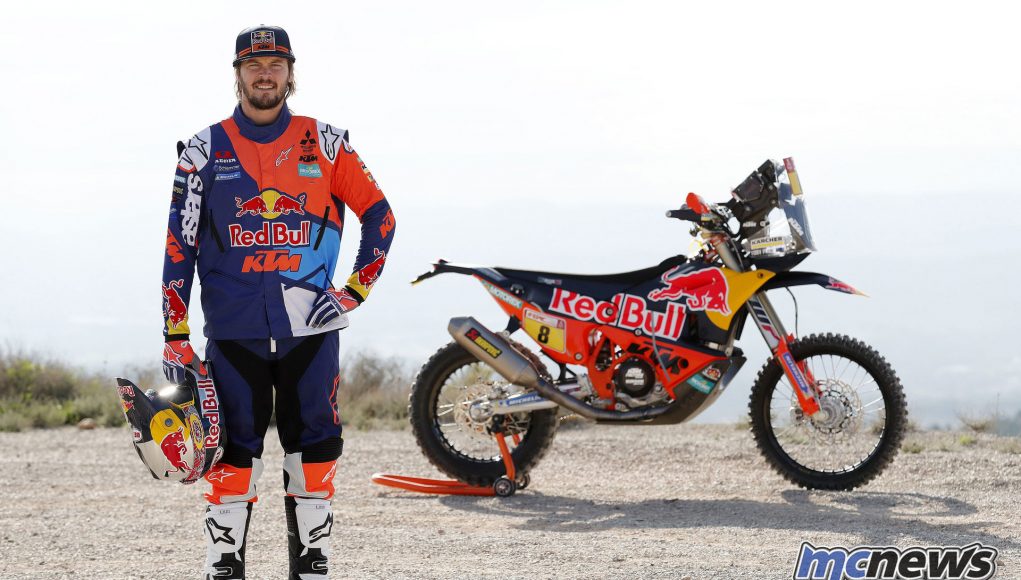 Toby Price out to reclaim form

Two-years after his breakthrough Dakar win in 2016, Toby Price has been through the wringer. Since that life-changing victory the likeable 30-year-old has been plagued with injuries. Dakar 2018 sees Price aiming to prove he is back stronger than ever.

Australian Toby Price knows he still has the speed and experience for a good result but is realistic about his chances after having such little bike-time.

“I am really excited for the Dakar 2018. It’s going to be difficult for me because I haven’t had much time on the bike throughout the whole of last year due to injury. Despite that, I’m feeling good now and really looking forward to the race. My plan is to take things steady, get to the finish of every stage and see where I am from there. Hopefully my experience will come through and I’ll soon start feeling more comfortable and be able to push on a little.”

Reigning Dakar Rally champion Sam Sunderland will head off on Saturday with his bike displaying the number-one plate. The Brit is keen to equal his success of 2017, but is aware of the size of the task ahead of him.

Matthias Walkner comes into the Dakar after winning the final round of the FIM Cross-Country Rallies World Championship. The Austrian is keen to go one better than his runner-up position of 2017.

Antoine Meo returns to the Dakar after a stellar rookie performance in 2016. The ex-World Enduro Champion rode superbly on the new KTM 450 RALLY in Morocco on his return to competition and hopes to carry that pace into the 2018 Dakar.

The Rockstar Energy Husqvarna Factory Racing team are also all-set for the longest and toughest challenge in the annual rally calendar, the 2018 Dakar Rally. Featuring reigning FIM Cross-Country Rallies World Champion Pablo Quintanilla and highly-experienced racer Andrew Short, the team will tackle the world’s most demanding rally aboard the latest edition of the FR 450 Rally machine.

For two-time FIM Cross-Country Rallies World Champion Pablo Quintanilla, the 2018 Dakar Rally will be a perfect opportunity to demonstrate his skills in tackling long and demanding rally stages. Working hard to prepare himself for this big challenge during the 2017 season, the Rockstar Energy Husqvarna Factory Racing rally star will be launching an attack for the top step of the podium at this 40th edition of the Dakar Rally.

“I feel great going into this year’s Dakar. The last two seasons have been amazing and we managed to secure the World Championship, but the Dakar is something completely different. It is the first and also the biggest race of the year. As the World Champion, there is always expectations and maybe some added pressure but I know exactly what I need to do. I have trained really hard for this event and I want to start it on a high note. Winning the Dakar has been my dream ever since I started racing rallies and I will do my best to make it true. I feel really good on my bike at the moment. As a team, we are really solid and this is also a big advantage for such a long and challenging event. I want to enjoy the race and continue learning. The sand dunes and the altitude stages make this year’s event even more tough but I want to do my job and race for the victory.”

Switching to rally racing following a stellar career as a top-level motocross racer, American Andrew Short is fired up for a good overall performance at the 2018 Dakar Rally. Enjoying some productive months of testing and training, the acclaimed US racer has his eyes set on reaching the finish line in Córdoba, Argentina.

The Monster Energy Honda Team is poised to take the start of the 40th edition of the Dakar Rally, with the team today making it through the administrative and technical checks prior to the start.

The five Honda CRF450 RALLYs are now closed in the parc ferme awaiting the moment of truth as the greatest challenge to man and machine gets underway. There will be no margin of error this time out with the team’s clear objective being an overall triumph.

Joan Barreda is fully fit and recovered from the left-arm injury which delayed his Dakar preparations. Despite everything, Joan has had a blistering year with victory in the Baja Aragón and the Vegas to Reno race. Barreda, according to the pundits, is one of the favourites to take the overall title.

“I am very happy and excited to start the Dakar. After the last months’ work, the countdown to be here has been positive. We will see this first week, if we can adapt to the pace and the difficult navigation to see if we can position ourselves well for the race.”

Kevin Benavides is also on cracking form and fitness and arrives at the Dakar hungry to prove himself in this edition. Last year an untimely right wrist injury ruled the young Argentine rider from Salta out of the race. This year a fully-recovered Kevin has bounced back and proved to be unbeatable in the Desafío Ruta 40 and placed second in both the Atacama Rally and the Morocco Rally and posted an overall third spot in the Baja Inka.

American Ricky Brabec is another rider with a point to prove in the 2018 Dakar. After dominating the desert races in North America, he raised trophy at the Sonora Rally and the Vegas to Reno before closing 2017 with a podium place in Morocco. Brabec, of course, last year clinched his maiden Dakar stage win.

Michael Metge, meanwhile has come on leaps and bounds and continues to go in search of a top result. The Frenchman, as well as being a reliable point of support for team-mate Joan Barreda, awaits his shot at glory in the world’s greatest challenge.

Gas Gas also rejoined the Dakar Rally this year, to read about their team and efforts see: Gas Gas returns to Dakar in 2018! | Aubert | Barragan (link)

The 2018 Dakar Rally starts on Saturday January 6 with the first of 14 stages. The rally spends five days in the sand dunes of Peru before heading through the mountains of Bolivia where the riders will race at altitudes of over 3,600 metres.

The final days of the event see competitors battle not only the tough and technical terrain of Argentina, but its scorching temperatures as well. The finish in Cordoba will mark the end of close to 9,000 kilometres of one of the most difficult Dakars in history.

Coronavirus and motorcycle sport in Australia | Interview with M.A. CEO