Round three of the Pirelli Road Race Series was held at a sun baked Winton on 21st and 22nd July. This round included the running of the 61st Harvie Wiltshire race with price money of $4455. This award trophy has seen riders such as four times winner Robbie Phillis. Other winners have included Steve Martin and Daryl Beattie.

Steve Tozer who qualified forth was out to equal Phillis’s record of four wins in the Harvie Wiltshire. The lead up to the race wasn’t without it’s drama’s as pole sitter Ryan Taylor blew his engine and was forced to use his spare bike. Levi Day second on the grid has a crash in an earlier race along with Chas Hern.

Both Taylor and Day on the 600cc machines felt that they needed to lead the race and a pull a gap on the 1000cc machines. Tozer was very confident at the grid interview of winning the race. Chas Hern would have been favourite on paper after recording some fast times in earlier races on the short circuit.

Tozer pulled away from both Taylor and Day early, Taylor with engine problems retired from the race on lap 3 and left it to Levi Day to chase Tozer down, however Tozer was building a good lead in the race and was 10 seconds ahead after 15 laps of the 30 lap race.

Matt Partidge was forced to give up the chase and battle with Levi Day and Tyson Jones due to tyre wear.

Steve Tozer won his forth Harvie Witshire by 13.7 seconds ahead of Levi Day with Tyson Jones taking out the last spot on the podium.

Tozer said it was a tough 30 laps and was glad his pit board allowed him to manage the race. Levi Day added he was unable to reel in the early gap but loved the long race and was ready to go for the next 16 lap race of the afternoon.

ASBK Prostock leader Chas Hern qualified in pole position for the Superbike/Superstock 1000 race along side Steve Tozer, Kris Parnel and Matt Partridge. Steve Tozer despite finishing 2-2-1 has extended his lead to 22pts in the championship over Parnell. Chas Hern has won the round with a 1-1-2 ahead of Tozer and Partridge.

The Superbike/Superstock 1000 TT Series has seen Tozer break the championship deadlock between himself and Parnell by winning both of the 16 lap races. Kris Parnell who decided to withdraw from the Harvie Witshire to focus on the TT has finished in second place ahead of Matt Partridge. Tozer holds a slight lead in the TT championship with 144pts ahead of Parnell on 138pts going into the last round.

Supersport championship leader Ryan Taylor ended his first race of the weekend early by suffering engine problems in the first sprint race of the weekend. But the battle continued in the remaining two races between Taylor and Levi Day with each recording a victory. Day won the round with a 1-1-2 performance ahead of Ben Blyth who rocketed off the start line and finished 2-2-3, Brad Shaw finished in third place. Taylor on 188pts leads the championship from James Patrick on 156pts and Levi Day on 147pts.

One of the great battles of the weekend was between Day and Taylor, but Day crashed in race one of the TT series. Ryan Taylor went on to win both races ahead of Brad Shaw and Ben Blyth.
Ryan Taylors dominating performance has won him the TT Championship, his 66pt lead ahead of Byron Gill 81pts and Brad Shaw 80pts.

Ben Blyth won the Superstock 600 sprint series round after championship leader Brad Shaw finished 10th in race 2. Brad Shaw still holds a very handy lead into the last round ahead of Blyth and Patrick.

Superstock 600 TT series was won by Benjamin Currie who took out both races. The championship is going down to the wire with Brad Shaw only 8pts ahead of Benjamin Currie with one round to go.

Jacob Whitehouse has again won all four races on his Moriwaki MH80. Whitehouse leads the Junior 80cc series with a perfect score of 300pts from Felicity Johnson and Nathalia Johnson. Zackary Johnson won his Junior 70cc class ahead of Patrick Clancy.

Again the 250cc class is dominated by two female riders with Vicki Homes beating Bronwyn Sorensen in both sprint and tourist trophy races. Bronwyn had some rare crashes this weekend and leads the TT Championship while Vicki Holmes leads the Sprint Series Championship.

In the Bears/Thunderbike & Period 6 class it was David Simpson on the Ducati that took out the Sprint Series ahead of Ben Blyth. Mark Stephenson from NSW has won the TT round ahead of Gibson and Jenner. David Simpson still leads both Sprint and TT Championships.

Kris Parnell won the Superstock 1000 series this weekend from Matthew Partridge and Marcus Simpson. Kris was going so well that he challenged the Superbikes for top spot this weekend. Parnell leads both series. Lee Franklin hangs onto second place in the championship after borrowing Dean Von Schills Suzuki. Franklin is looking forward to the last round on his own bike.

Tim Podt on the Honda VFR 400 won this round again in the sprint series from Glenn Kettle. Podt also won the TT series beating Malatesta from Kettle. The constant Paul Cassingham leads both the Sprint and TT championships.

The Pre-Modern series leader Hayden Graham on his GSX-R750 had a big crash on Friday and was frantic to get his bike back for racing on Saturday. Graham could only manage second place behind Ben Scott in both the Sprint and TT Series. Hayden Graham still holds his lead in both championships.

Most classes in the championship are still alive. The last round scheduled for Broadford on 13-14th October will be a great battle for the front runners. “Let the battle begin” 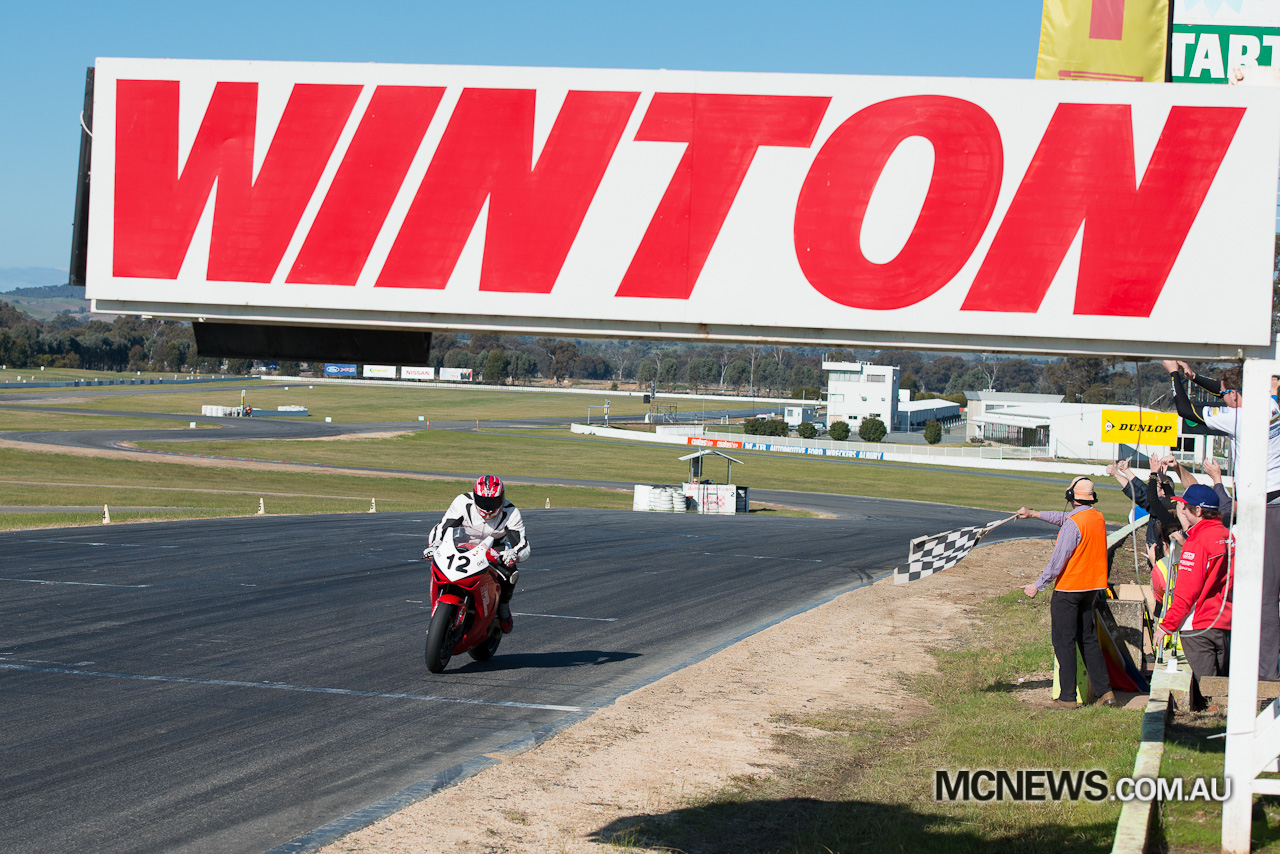 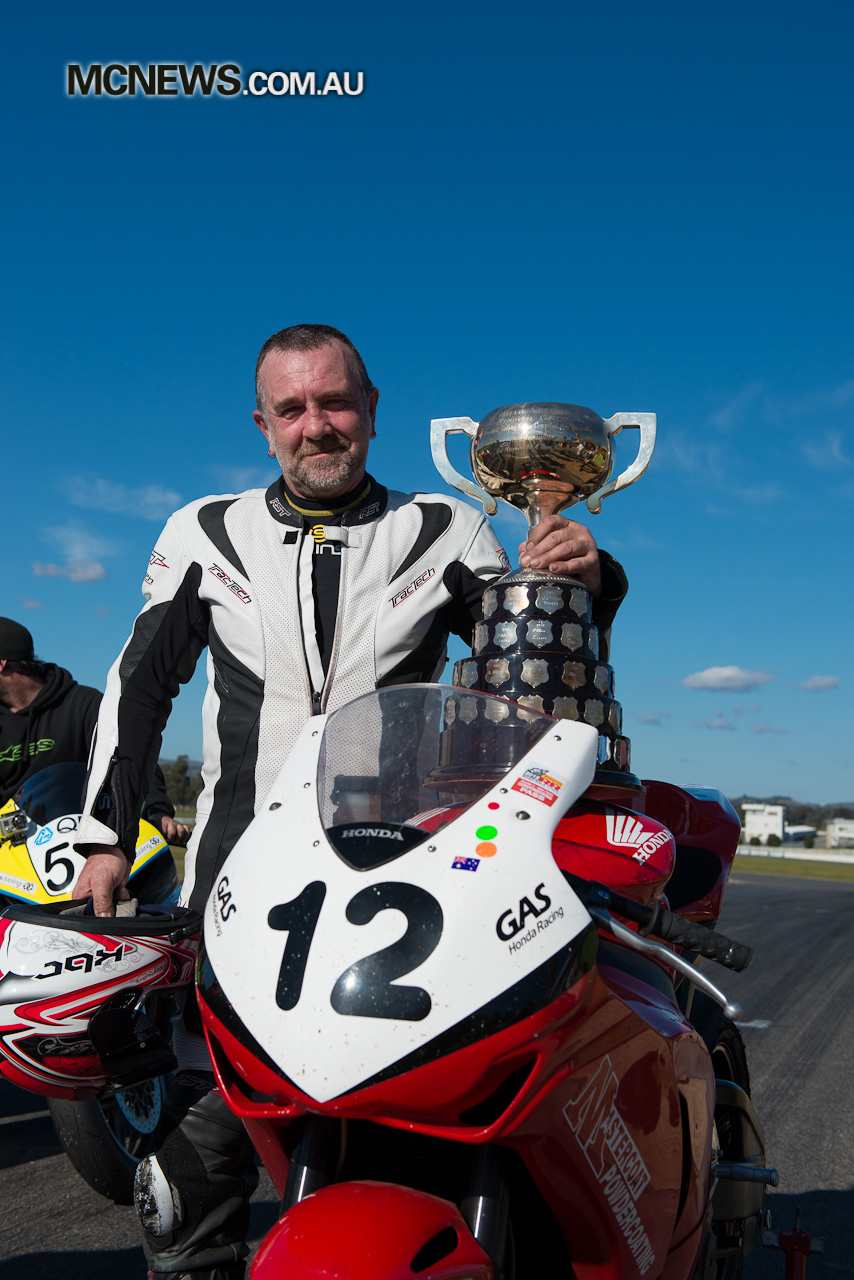