This will be the 15th occasion that a Grand Prix event has been held at the Losail International Circuit and the 11th under floodlights.

This will be the 12th successive year that the Losail circuit has hosted the opening Grand Prix event of the year.

Yamaha have been the most successful manufacturer in the MotoGP class at the Losail circuit with 8 wins, including 4 times in the last 6 years.

Honda have had 3 MotoGP wins in Qatar, the last of which was in 2014 with Marc Márquez.

The best result for a Suzuki rider at the Losail circuit is the fourth place finish by John Hopkins in 2007. Álex Rins was the best Suzuki rider across the line in Qatar last year in ninth position; Andrea Iannone crashed out of the race with 10 laps to go.

Aleix Espargaró’s sixth-place finish in Qatar last year equalled the best ever result for Aprilia in the MotoGP class, which was achieved by Colin Edwards at the opening race of the 2003 season at Suzuka. Espargaró equalled this best result later in Aragón.

KTM made their full-time debut at Losail last year, with Pol Espargaró crossing the line in 16th ahead of his teammate Bradley Smith.

Since the MotoGP class was introduced as the premier class of Grand Prix racing in 2002, six different riders have won the opening race of the year: Valentino Rossi, Loris Capirossi, Casey Stoner, Jorge Lorenzo, Marc Márquez and Maverick Viñales.

Since 2002, there have been only three occasions on which the rider who clinched the title at the end of the year didn’t stand on the podium on the opening race: 2008 (Rossi), 2015 (Lorenzo) and last year (Márquez).

The only four current riders who have won in the MotoGP class in Qatar are Valentino Rossi, Jorge Lorenzo, Marc Márquez and Maverick Viñales.

Rookie of the Year and Independent Team rider in 2017, Johann Zarco led the first six laps in Qatar last year, becoming the only rider on the current grid to lead a race on his MotoGP debut and the first since Max Biaggi and Noriyuki Haga led the opening race in Japan back in 1998. He also set the fastest lap before crashing out of the race.

With his third podium in the final race at Valencia last year, Johann Zarco equals the number of podiums in the premier class of his fellow-countryman Éric Offenstadt.

With his win in Valencia last year, Pedrosa (11 years 182 days) moves above Phil Read into third place on the list of riders with the longest winning careers in the premier class of Grand Prix racing – behind Valentino Rossi (16 years 351 days) and Alex Barros (11
years 204 days). Pedrosa equalled the same number of victories in the premier class as Eddie Lawson achieved in his 500cc GP careers.

Franco Morbidelli (2017) and Tom Lüthi (2016) are the only two of the five rookies in the MotoGP class this year to have previously won at Qatar in any of the smaller classes.

The MotoGP grid for 2018 consist of 19 riders who have previously competed in the class, together with the addition of five rookies. The full-time entry list for thisyear has following changes from last year:

Joining the grid in 2018 are 5 rookies, four of which have been Grand Prix winners in the smaller categories: Franco Morbidelli (8 wins), Tom Lüthi (16), Xavier Siméon (1) and Takaaki Nakagami (2), and Hafizh Syahrin has a number of podium finishes in the intermediate category.

The following table shows the Grand Prix wins and World Championships achieved by the riders on the 2018 MotoGP entry list. 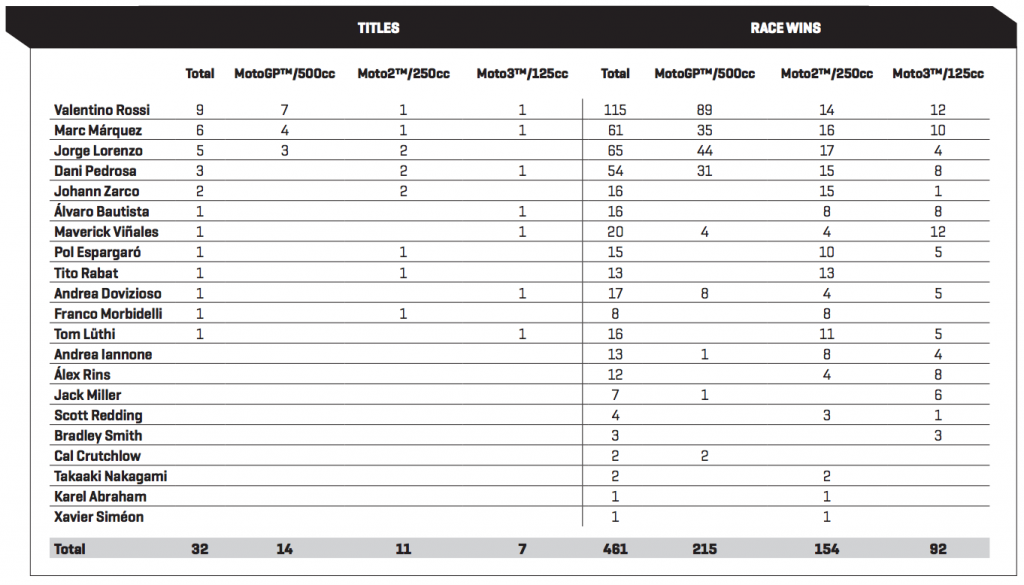 The strength of the MotoGP grid

There are 12 Grand Prix World Champions on the full-time MotoGP entry list in 2018, equalling the previous record of the 2015 season.

These 12 riders have won a total of 32 World Championships titles between them; a new record for the full-time MotoGP entry list.

Nine of the riders on the list have won races in the premier-class. These nine riders have won a total of 215 premier class GP races between them – the highest ever number of accumulated premier class GP wins on the entry list at the opening race of the
year.

21 riders on the MotoGP entry list have had race victories in at least one of the three classes of Grand Prix racing, with a combined total of 461 Grand Prix victories.

The oldest rider on the MotoGP full-time entry list is Valentino Rossi, who celebrated his 39th birthday in February.

The youngest rider is once again Álex Rins, who will be 22 years 101 days old when he lines up on the grid in Qatar.

14 Grand Prix winners and 87 wins on the Moto2 grid

With 2017 Moto2 World Champion Franco Morbidelli and 2016 & 2017 runner-up Tom Lüthi moving up to the MotoGP class, there is an opportunity for the new riders who line up on the Moto2 grid in 2018, including the 2017 Moto3 world champion Joan Mir and last year’s MotoGP riders Sam Lowes and Héctor Barberá.

The main changes in the full-time entry list for this year are as follows:

Sam Lowes, Steven Odendaal and Eric Granado won’t be eligible for the rookie title due to their previous experience in the Moto2 class, and neither will Hector Barbera, who has a wealth of experience in the 250 World Championship.

Strength in depth of the Moto2 grid

14 of the riders on the full-time Moto2 entry list have previously won Grand Prix races.

Four of the riders competing in Moto2 in 2018 have won the Moto3 World Championship: Joan Mir, Álex Márquez, Danny Kent and Brad Binder. Sam Lowes won the World Supersport Championship back in 2013.

The youngest rider on the full-time Moto2 entry list is Iker Lecuona, who will be 18 years and 72 days old when he lines up on the grid in Qatar. Lecuona is one of five riders in Moto2 who will start the season as teenagers, along with Fabio Quartararo, Stefano Manzi, Bo Bendsneyder and Khairul Idam Pawi.

Once again, the Moto3 class has attracted a host of young, talented riders to Grand Prix racing from around the world. The main changes in the Moto3 entry list compared to 2017 are given below:

Of the 28 riders on the full-time entry list, 13 will start the season as teenagers. The youngest rider competing full-time in Moto3 in 2018 is Alonso López, who will be 16 years 87 days old at the opening race of the year.

At the Qatar Grand Prix, Dani Pedrosa is scheduled to become the first Spanish rider in the history of motorcycle Grand Prix racing to reach the milestone of 200 starts in the premier class.

The following list shows the ten riders with most starts in the premier class:

With 11 wins to their name (see table above), Joan Mir and Mattia Pasini are the most successful riders on the 2018 Moto2 entry list. Their closest rivals are Romano Fenati and Héctor Barberá, with ten each.

None of the previous winners of the Moto2 race in Qatar are competing in the class in 2018, although two riders who have won in the 250cc class at the Losail circuit are: Mattia Pasini (2008) and Héctor Barberá (2009).

The only other past Qatar GP winner in a smaller class is 2017 Moto3™ World Champion, Joan Mir. He will be aiming to become the first lightweight class World Champion to win on his debut in the intermediate class since Dani Pedrosa in 2004.

Since 2008, there has always been a different winner in 250cc/Moto2 in Qatar. Jorge Lorenzo is the only rider to have won two consecutive races in the intermediate class in Qatar, in 2006 and 2007.

Back in Moto2 this year, Sam Lowes qualified on pole position at Losail in 2015 for the first time in his Grand Prix career. He crashed out of that race in the final corner of the second lap after hitting a false neutral. His best result at this track is a sixth place finish, which was back in his rookie year in 2014.

Kalex riders have won the last five Moto2 races that have been held in Losail. The last non-Kalex rider to win on the track was Marc Márquez in 2012, on a Suter.

Miguel Oliveira won the last three Moto2 races last season. In Qatar, he will be aiming to become the first rider to take four successive wins in the intermediate class since Toni Elias in 2010. Last year in Losail, he was the best KTM rider across the line and picked up a fourth-place finish–his best result in the Moto2 class at that time– from fifth on the grid.

2017 Rookie of the Year, Francesco Bagnaia, was on the podium in Moto3 in 2016 in Losail and finished his first Moto2 race in 12th position last season.

With Joan Mir and Romano Fenati moving up to Moto2, Niccolò Antonelli and Arón Canet are now the most successful Moto3 riders on the grid, with three wins apiece. Their closest rival is Enea Bastianini with two. The Italian rider also tops the current field with 18 podium finishes.

Jakub Kornfeil is the only rider of the current grid that has started all of the 106 Moto3 races that have taken place since it was introduced in 2012.

Niccolò Antonelli is the only rider in the current Moto3 field who has won a GP race in Qatar, in 2016, and he was the second Italian rider to win in Qatar after Andrea Iannone in 2009. Since this win, Antonelli’s best result is a second place in Japan last year.

For the last nine years in the Moto3/125cc class, the rider winning the World Championship has finished on the podium at the opening race in Qatar.

Since the Moto3 class was introduced back in 2012, there has always been a different winner in Moto3 in Qatar.

With his first win in Valencia last year, Jorge Martín became the ninth Spanish rider–and 25th overall–to win in the Moto3 class. He started from pole position last year in Qatar for the first time in his Grand Prix career, after qualifying sessions were cancelled due to bad weather conditions. He crossed the line in third place in the race for his second podium in Moto3.

As in 2015, Honda riders took the first five places in the Moto3 race last year in Qatar. The last KTM winner in Moto3 class on the track was Jack Miller back in 2014.