Stage 11 of the 2020 Dakar Rally, the penultimate day of racing, saw riders cover 744 kilometres, with a timed special of 379 kilometres, with riders still needing to personally care for their machines and tyres in order to complete the stage successfully.

Joan Barreda led Ricky Brabec and Kevin Benavides from the start, with the three Honda riders setting off first and leading the now 97-rider field.

Reaching the special it was Pablo Quintanilla on the attack, leading Matthias Walkner and Luciano Benavides, but 103 km in Luciano was setting the fastest pace, three-minutes ahead of Toby Price.

At the 108 km mark Ricky Brabec was losing time, sitting 6min-28s off the leader, and as the special progressed would fall further back to trail by nine-minutes, with Toby Price also 4min-51s behind the leader.

Matthias Walkner meanwhile closed in on leader Quintanilla, with just 11-seconds separating the two at kilometre 212, with Brabec falling further behind.

It would be Pablo Quintanilla who took the stage win from Matthias Walkner in the provisional results, with just nine-seconds between the two riders.

“Honestly, the stage was really tough today – all off-piste and very fast. I felt good and was able to push as hard as I could. Overall, I’m really happy with my race and to be in this position going into the final day. After difficult months I have had coming back from injury, it feels great to be here and second overall going into tomorrow. As always I will give my all and we’ll see what will happen.”

“I had a really good stage today and made the most of my good start position to really push the tracks left by the guys in front. I was riding at 100% for the entire special. I ran out of fuel about two kilometres before the refuelling but was able to lie the bike on its side to get the last bit to the pump and luckily it was just enough to carry on. I made up some good time today, but with just one stage left it’ll be tough to make up much more time. I’ll definitely give it my best and aim for a strong finish to the rally.”

Luciano Benavides was fourth ahead of Joseo Cornejo, with Toby Price completing the top-five.

“It was a really nice day today and the first time we crossed some big dunes, so I like that a lot. I was really worried about the fuel, so I eased off before the refuelling but made it ok. After that I caught the group in front and rode with them for the rest of the stage – just trying my best not to make any mistakes and get to the finish safely. I’m really happy because there’s just one more day to go now and I hope I can finish this Dakar strong.”

“Today was the first day of real dunes. I was feeling pretty much at ease. It was very entertaining and I had a lot of fun. I’m in one piece and the bike too is in perfect shape. Tomorrow is the final day and we are fighting to improve our overall positions. I think that compared to last year I have improved a lot, I feel a much more complete rider. I still have to improve some things but I am very happy with my progress.”

“I was able to make up a fair amount of time today but with the stage cut short yesterday it was difficult to get enough people between myself and the leaders. All-in-all it’s been a good day with very similar conditions to yesterday really – very fast and open. The sand has made for some tough going and like a few people today, I nearly ran out of fuel before kilometre 229. I managed to get in with about one litre left in the tank. One day to go now and I’m still feeling good so we’ll see what tomorrow brings.”

Australian Rodney Faggotter was just inside the top 10 in 19th position for the stage, 24min-10s off leading pace.

Ricky Brabec retains his overall lead from an attacking Pablo Quintanilla in the overall standings, while Toby Price is third, 22min-34s off leader Brabec’s combined time.

“There’s one stage left. The team is working well. I’m pretty excited. I can’t get my hopes up right now. Stage 11 here in the dunes was pretty tough. Starting up front due to the cancellation of the second part. So it was really hard to judge the time. Tomorrow there is one stage left and I’m in a good starting position. I’m confident to be focused and make it to the finish line.” 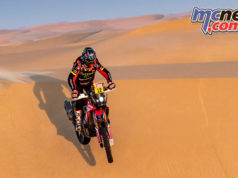