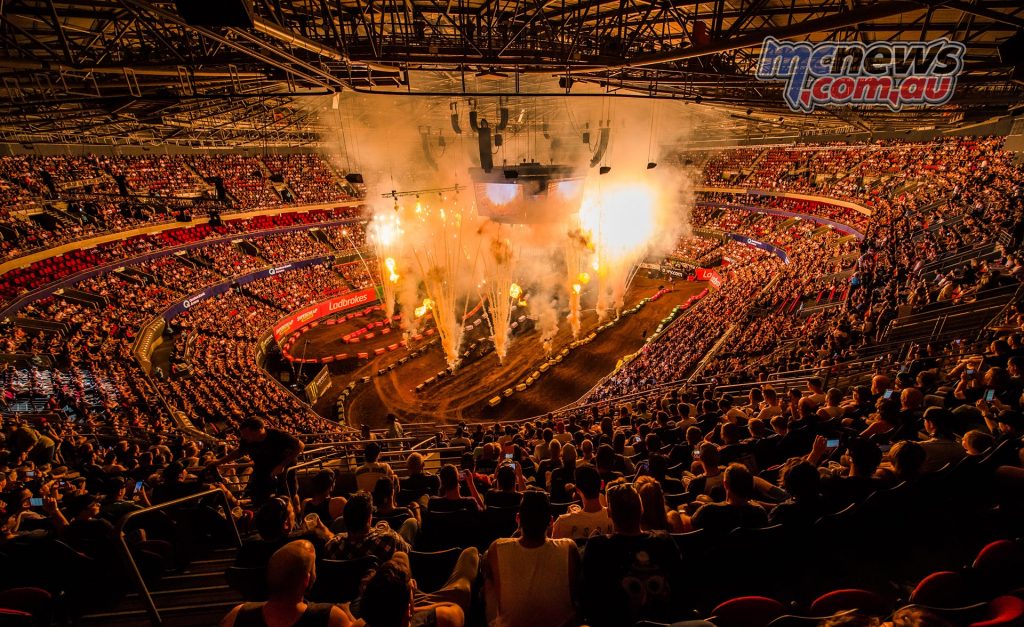 The night began with Nathan Crawford taking holeshot, seeking redemption after his DNF at the last round at Avalon. The tight first corner slowed down the action behind giving him a chance to make an early break from the field. Behind, teammates Joel Wightman and Kyle Webster found each other and rubbed plastics causing Webster to go down. Out front though, Crawford had pressure coming in the way of Jackson Richardson. Mid-race Richardson made the pass by scrubbing the triple and cutting off Crawford’s line. No one could match his pace out front, and Richardson ran away to take the win ahead of Crawford and a fast finishing Dylan Wills.

American import Gavin Faith may be all but out of the title chase but that didn’t stop him from taking a comprehensive heat win. Leading wire to wire, Faith seemed in his element in the small arenacross style track; similar to those he dominated in his native country on the way to an AMA Arenacross title earlier this year. Teammate Josh Cachia followed him through the first turn and rode a composed race to keep Faith within seeing distance. Red plate holder Hayden Mellross didn’t have quite as much luck going down in the first corner, and then going down mid-race after clashing with another rider. Mellross would eventually rejoin the race several laps down to go through to the semi. 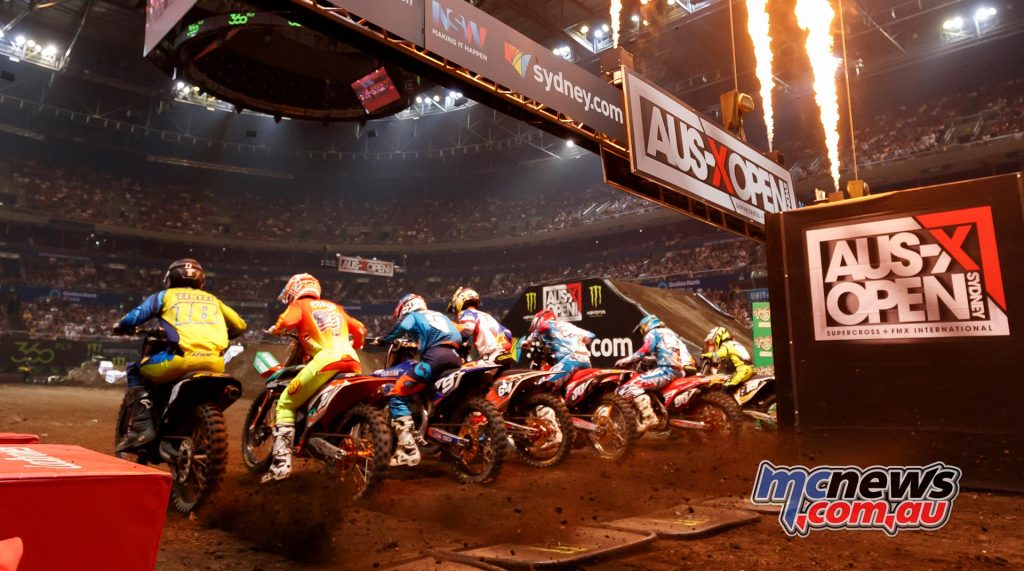 Heat 1 saw the first showing of former AMA champion Ryan Villopoto and fans didn’t need to wait long to see what he can do. After Kyle Peters forced his way through the pack to take the holeshot, Villopoto’s whoop speed was a step above the field, and he soon swallowed up Peters. Behind two former champions in Jay Marmont and Daniel Reardon battled it out for the minor spots. Both retired from the sport in recent years but showed they still have what it takes to match the best. Villopoto was too strong though taking the win in easy fashion ahead of fellow American Kyle Peters. Marmont held off his successor Reardon to round out the podium.

Hometown hero Chad Reed made a return to racing in Australia in style taking the holeshot by a clear bike length. Yamaha’s washed the field early with Dean Ferris and Cooper Webb following behind closely. Coming off a win last round, Ferris wanted to prove that he’s no one-trick pony and kept the AMA Champion at bay for the early part of the race. A lapped rider caused havoc leaving Reed to roll the rhythm section under the yellow flag, behind Ferris did the same correctly but Webb ignored the flag jumping the section and tried to make the pass entering the tunnel slamming Ferris into the wall in a unsportsmenlike pass. The crash pushed the barriers onto the track leaving no room for anyone to get through. Justin Brayton rode over the bike to get back on track and inherited second place. By this time Reed had established a massive lead and lit the flames for a strong win.

Young Husqvarna up and comer Kaleb Barham shot out the gates to cut across the field to take the holeshot. Dylan Wills kept him honest in the early stages before Barham went down after the triple mid-race. Wills had pressure from Aaron Tanti who was looking strong after a disappointing season, but he couldn’t make the pass. Another clash between teammates Joel Wightman and Kyle Webster on the final corner left Webster once again picking up his bike with no love lost between the Honda riders.

Wilson Todd and Lewis Woods crossed the white line first in a photo start leaving Hayden Mellross once again buried in the pack. Todd entered the tunnel first though left his competitors to tangle behind. Mellross did whatever he could to take back positions, parking Lewis Woods high on a corner to stamp his point. Amongst the action, Geran Stapleton sat behind Todd leaving no room for Mellross to get through. With three riders advancing Mellross scrapped through to make the main event.

Daniel Reardon put on a clinic in his semi win. Taking the holeshot and charging early, he gapped Jay Marmont in second, leaving the veteran to be chased down by young American Chris Alldredge. Marmont has shown all series long he has the speed and stamina and on the tight track he was no different for the experienced rider. Alldredge mounted a late charge but couldn’t catch Marmont as Reardon cruised over the line.

After the heat race incident, Cooper Webb returned to do it the easy way second time out, edging out Kade Mosig for the holeshot. Jay Wilson and Todd Waters found each other on several occasions before Waters finally made the pass mid-race for third. Mosig looked sharp early in second, but out front Webb’s pace couldn’t be matched. After a disappointing qualifying position, Mosig showed the speed of previous rounds to hold onto second place, leaving Webb out front-running his own race to take the win.

Jesse Madden and Kaleb Barham banged bars in the first corner with Madden coming out the better of the two. Ford Dale, Kyle Webster, and Lewis Woods collided entering the first corner causing a pileup.  Madden was followed by Kale Makeham after he made the pass into second mid-race. Madden and Makeham secured the final two main event spots.

The two noticeable riders in the LCQ Wil Hahn and Dean Ferris jumped out to an early lead looking to avoid any dramas with other riders and looked to have the race in their grasp. Jesse Dobson put on a charge slowly picking off time behind Ferris but in only a four-lap race, time was against him. Dobson fell just short of Ferris and Hahn missing out on the final spot in the main event. 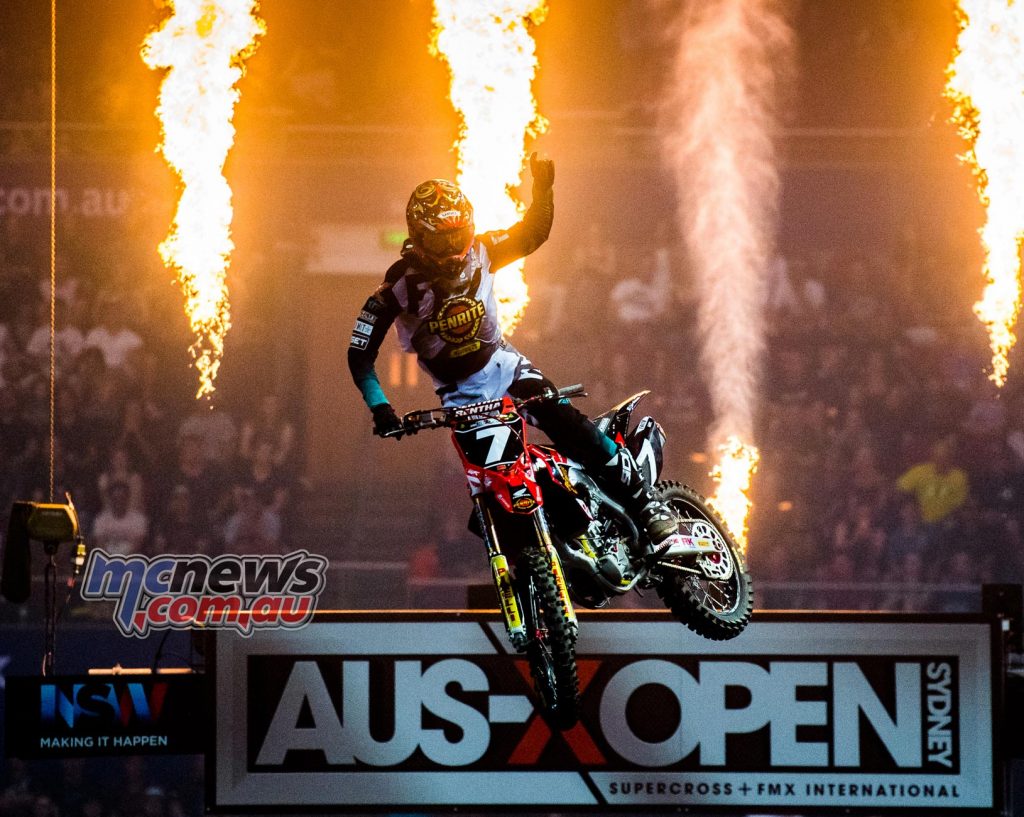 Picking up where he left off in his heat, Gavin Faith once again took the holeshot ahead of Nathan Crawford and Jackson Richardson. Hayden Mellross rebounded from a poor jump out of the gates to find himself in fourth early. Richardson made short work of Crawford but ahead, Faith pulled away as he dropped down laps. Mellross managed to squeeze past Crawford, who would find himself under pressure from semi winner Wilson Todd. Jesse Madden managed to walk away from a scary crash after missing finish line down ramp and landing in oncoming traffic leaving the sand tunnel. The rhythm section proved vital for Mellross as he slowly picked up time each lap on Richardson, before going for the jugular with two laps to go. The move didn’t pay off, sending Mellross off the track and almost losing the third position to Crawford. Faith rode his own race out front and had a clear run of lap traffic, lighting the flames for back-to-back wins for the American. Richardson held onto second ahead of Mellross who retains the red plate win one race to go. 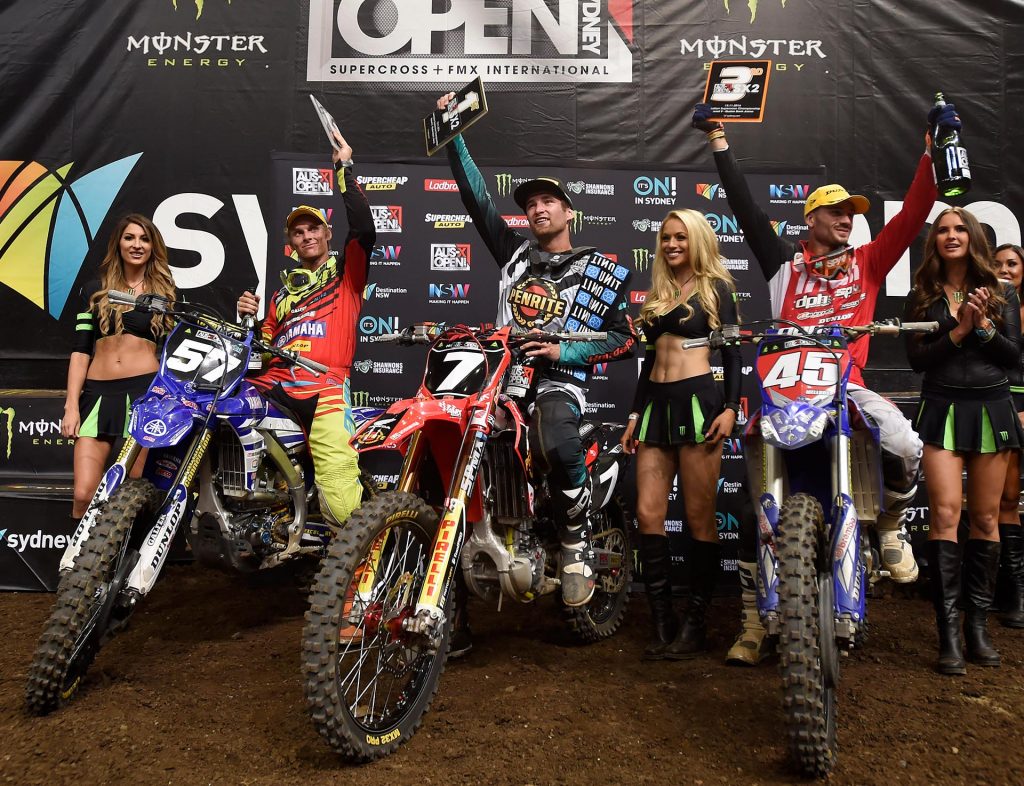 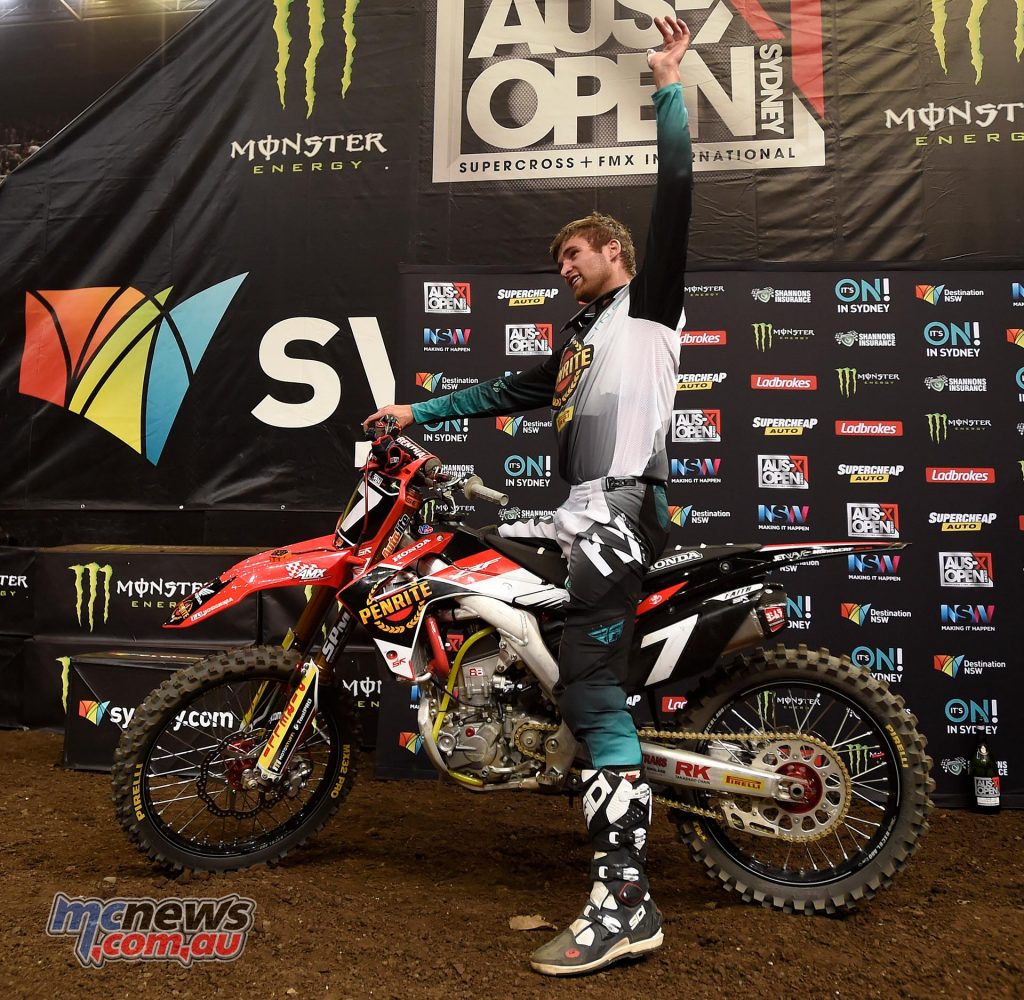 Anticipation grew as the world’s best riders set to take the stage in the biggest race of recent times. Justin Brayton and Ryan Villopoto got out the gates quickest, but it was Brayton that hit the tunnel first. Chad Reed worked his way through early to find Brayton’s tail, while behind him Jay Marmont, Kade Mosig, Ryan Villopoto and Cooper Webb made up the minor places. A third of the way through the race, Brayton raced out to an eight second lead over Reed. The lead quickly diminished, and by lap eleven Reed looked to make a move and run Brayton high on the berm but couldn’t make it stick. Webb managed to work up to fourth behind Marmont but the former retired champion held his own against the up and coming star. The two battled to the end, but Marmont left nothing on the table and kept a healthy lead ahead of Webb, before losing the rear end around a berm in the closing stages, letting Webb close right in. Up front, Reed was slowly gaining lost ground on Brayton, and with four laps to go, pounced on a mistake by Brayton to take the lead for the first time in the main event. 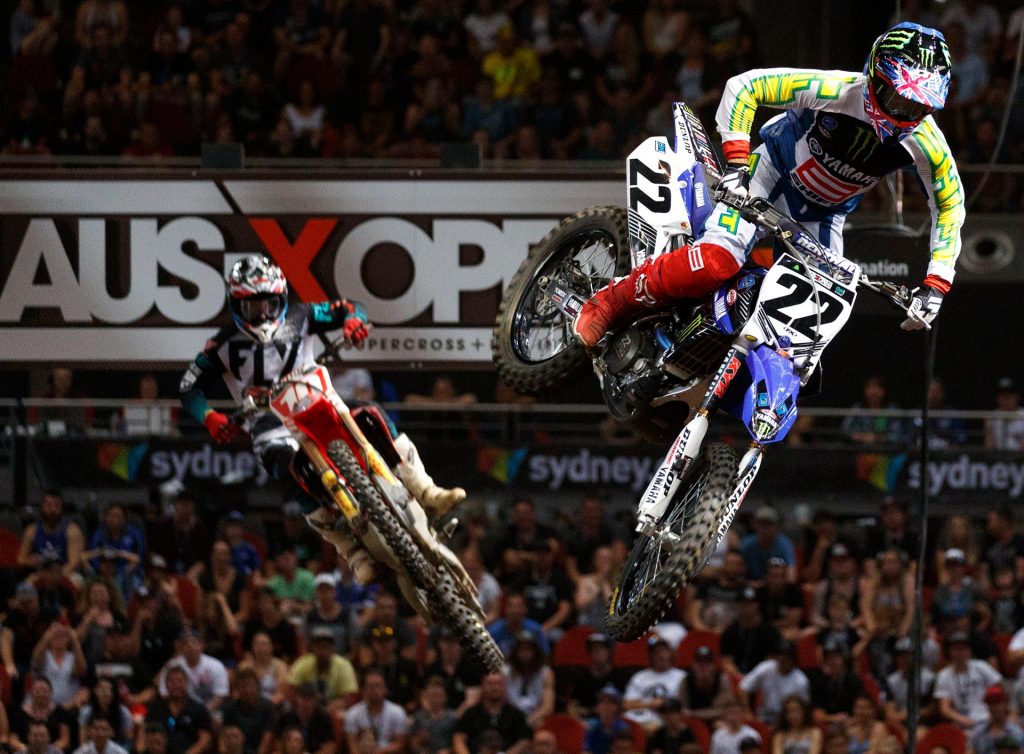 With only a few laps to go there, Reed laid down a late race charge to pull away from Brayton and take the win for the night. Brayton’s second place was enough for him to secure the championship with one race to go. Marmont took the final spot on the podium showing Webb why he has legendary status in Australia, holding him off to give him his first podium of the year. 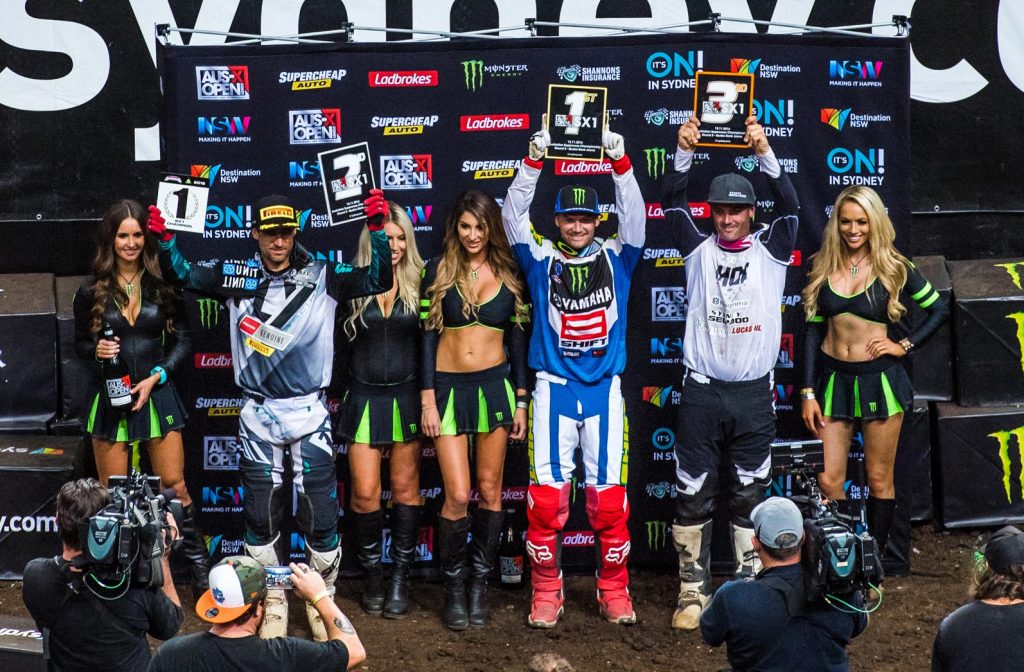 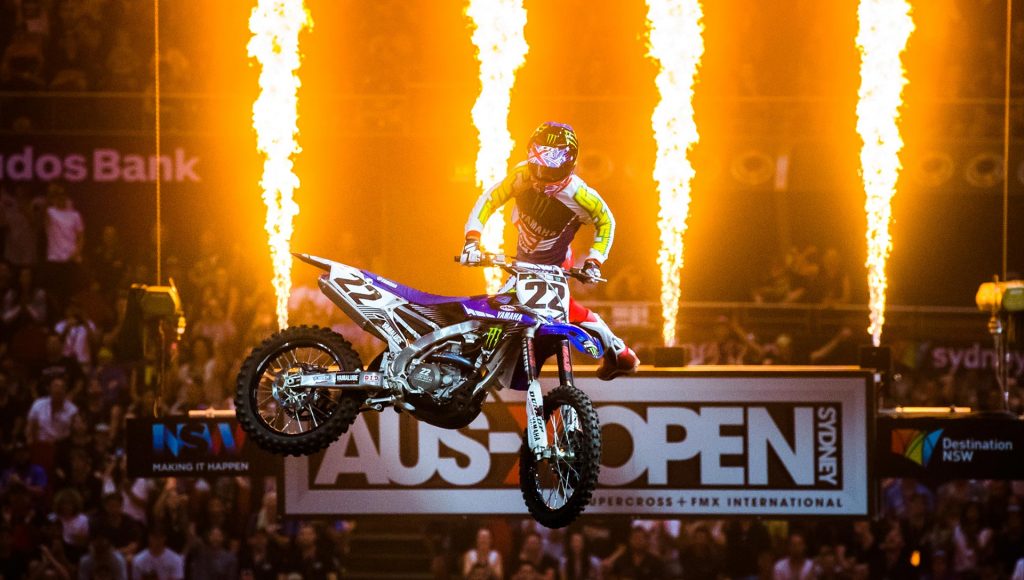 WorldSBK back in action at Aragon again this weekend