“This weekend was the third round of the Idemitsu Asia Talent Cup. Coming into the famous Suzuka Circuit in Japan was absolutely amazing, my nerves balanced my excitement. I had two practice sessions to learn the massive track, in order to try and find my settings for race day.

“In practice I felt not to bad, but the lap time wasn’t quite there. In Saturday qualifying I felt good, and gained the confidence to push. As I started to get into a rhythm I was dropping my times by seconds each lap, sitting in 8th position halfway through qualifying. As I was feeling better and better I came into turn 11 on a fast lap and hit a false neutral, I ran off the track and unfortunately dropped it in the gravel. I was not able to continue and complete the session.”

“Race one I got a terrible start, dropping back to 17th position from 13th on the grid. Throughout the race I made it forward to 12th, but unfortunately I struggled with a bit of speed. This led me to pushing a little too hard into the fastest corner on the track, crashing out on lap eight.

“Race two wasn’t a good experience at all. From the start of the race to the end I was giving it my best, but unfortunately I had many problems and ended up going backwards every lap, this was due to a few technical problems that I wasn’t able to overcome.

“Overall though the experience was amazing, and I learnt a lot from the weekend. Now I focus positively as I look towards round four of the Asia Talent Cup in Malaysia at the end of July.”

The riders got away cleanly under the Suzuka sun with a lead group emerging of front row starter Haruki Noguchi, polesitter Ryusei Yamanaka, Azroy Anuar, Yuki Kunii, and Can Öncü – with early season points leader Deniz Öncü the rider leading the chase from the second group.

Anuar was the first to attempt a break before being chased back down – and the ensuing fight at the front then saw the second group close the gap.

Drama struck in Race 1 for previous Championship leader Deniz Öncü, who after opening the year with a double then saw himself crash out of contention at Suzuka – his first DNF of the year as he attempts to take the crown.

As the last laps appeared on the horizon, Noguchi made a mistake in the final chicane, losing out as Kunii and Anuar fought it out for first, which turned out to be foreshadowing for the last lap – but for a different rider.

With four riders battling throughout that final lap, it all came down to that final chicane – with Yamanaka this time making the same mistake as his compatriot the lap before. Noguchi didn’t repeat the error, crossing the line to take the win ahead of a close fight for the podium – with Azroy Anuar taking second at the flag, just beating home hero Yuki Kunii, who completed the podium.

“It was a very nice race. There was a big group and they show good potential. I think they fought until the last lap. It was very, very interesting – the last chicane in Suzuka is always very difficult. Yamanaka tried, but he was a little too late braking and missed a podium. Anyway it was a good race, Noguchi was always strong leading the whole race, as well as Kunii and Malaysian rider Azroy. It was interesting because there weren’t so many crashes and the battle was quite nice and clean, I just hope tomorrow that the pace can be a little bit faster because I think if they can go into the 19s it would be better. But today we are also happy no riders were injured, which is also so important.”

Yuki Kunii took the win in a drama-filled Race 2 at Suzuka for the Idemitsu Asia Talent Cup, ahead of Saturday’s winner Haruki Noguchi. Wildcard Genki Nakajima took a podium finish as Japanese riders shone on home turf around the legendary venue.

Ryusei Yamanaka took the lead off the line from pole, with another incident-free start to the race as the riders streamed around the first few laps in a long freight train. Before long though, a lead group had appeared – with Yamanaka leading the likes of Race 1 winner Haruki Noguchi, Malaysian Azroy Anuar, wildcard Genki Nakajima, and Turkish rider Can Öncü. As the laps counted down, the positions switched back and forth as the race split into three groups.

As the riders came onto the last lap, it was Turkish rider Can Öncü leading a front group of Anuar, Yamanaka, Kunii and Noguchi – with wildcard Nakajima impressing once again a little further back. Then, the big drama of the race struck late in Race 2 – with Anuar crashing, and Yamanaka and Can Öncü caught in the crossfire.

Koji Hirama took P4, ahead of Deniz Öncü, Azroy Anuar – who remounted to cross the line in sixth – Koki Suzuki and Kai Saito crossing the line to complete the top eight, followed by Malaysians Erfin Firmansyah and Lucky Hendriansya.

Takuto Suzuki, Maxi Hattori and Haziq Hamdan were P11 to P13 respectively, with recovering Ryusei Yamanaka and Can Öncü managing to cross the line after the last lap incident to complete the points.

Race 2 leaves the two winners from Suzuka now first and second in the standings, with Noguchi on 87 points and Kunii on 85 – with Buriram double winner Deniz Öncü holding on near the top with 72.

It was a hard weekend for Australian Reid Battye who didn’t finish in Race 1 and just finished Race 2 outside the points.

The next stop is the Malaysia Superbike Championship from July 28th to 30th, with the impressive Sepang International Circuit next to stage the Idemitsu Asia Talent Cup.

“This is an interesting track from a rider point of view, a difficult track but if you race here you learn a lot. It was first time for Idemitsu Asia Talent Cup in Suzuka, and both races were interesting. Finally the outcome was not perfect because we have this incident at the last corner but I think there was some good racing. The only negative think I would mention it is the Irfan Ardiansyah crash the other day, he was really injured and we hope he can have a successful surgery and he can back home soon, but apart from this we are happy for the race. There were clearly two groups and this is something we expected – so we leave Japan understanding this circuit and looking forward to the next round.” 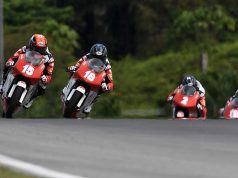 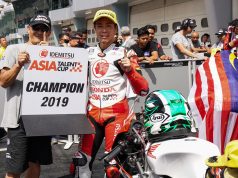 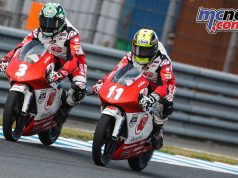