What is meant by the “Right Line”?

What is meant by the “Right Line”?  With Phil Hall.

These days motorycle riders must go through a much more rigorous training regimen than that which was the case when I got my licence. And yet it astonishes me that, even though all this training is done, many riders still have no idea of the concept of the “Right Line”

Let me set the scene for you with a little bit of history.

I first got interested in things mechanical while I was still a very young child, and in motor sports in 1959, the year that the late Sir Jack Brabham won the first of his eventual three Formula One World Championships. Becoming an instant student of the art (to the exclusion of the matters which SHOULD have been the concern) I devoured every book, magazine and periodical about motor sports that I could. Pre-internet, what you could learn cost you money so every penny of pocket money went on Sports Car World magazine, Wheels and Modern Motor magazine. Along with the recommended books of the day like Paul Frere’s “The Racing Driver” and others, I knew more about not just driving but driving fast nearly a decade before I actually sat behind the wheel.

And, one of the things about which I learned very early was the matter of the “racing line”. Long before drifting, class racing drivers could four wheel drift a racing car on tiny narrow tyres and without the benefit of massive amounts of horsepower. And the really good ones were so good that they could lap a circuit for lap after lap without ever deviating from a set line for each corner.

Once I got my car licence, and, later my bike licence, I took great delight in putting into practice what the books had taught me. Then, one night while riding up the Putty Road with my brother in tow to his home in Denman, I felt distinctly uncomfortable. It just didn’t feel “right”, so much so that I pulled over to the side of the road and stopped. My brother took off his helmet and stormed up to me. “What the hell do you think you are doing?” was his opening gambit, “You look like you’ve forgotten everything that we learned about lines for the corners.” I was just about to remonstrate with him when I shut up, thought about what I had been doing and realised that he was exactly right. I wasn’t riding the “line” at all, I had been all over the place and that was why I was feeling so uncomfortable. Helmets back on and it was like I had been transformed. It was  a revelation.

Somewhere between then and now, though, something went wrong. In 2006 I put my bike on the track for a track day, the first time I had been around Oran Park for nearly 20 years. I was on an old VFR750, in the novice (nervous) group. Every bike in the group was faster than mine and every rider took great delight in beating me up down the long straight of the Grand Prix circuit. But, you know what? Despite the prohibition on overtaking, I was swarming all over the fast guys in ever corner and following them through the corners was a revelation. It seemed apparent to me that, despite their fancy gear, tyre warmers and superbikes, the majority of them had no idea whatsoever of what the correct line for the corners was. They would scream down the straight in the middle of the track, jam on the brakes at the end of the straight and tippy-toe through the corners. Strange.

So I again became a “right line” Nazi. And, no sooner had I done so, that I noticed what I have already mentioned in my opening paragraph. Riders are better taught than they have ever been but somewhere along the line, the idea of the right line for the corner has been banished from the collective consciousness.

Start talking about it and they start to glaze over, like you’re speaking Spanish, or something. Go out with them on a ride and follow them through the corners and you sense that they either weren’t paying attention when the instructor was talking about this or they didn’t think it was important or whatever.

So, what IS the right line? Well, perhaps a diagram will be best here. 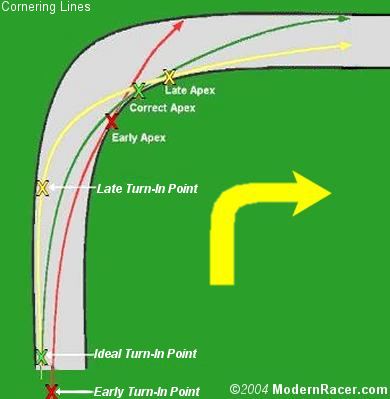 Now, as you can see, three different approaches to a corner are shown here.

Firstly, the “ideal ” line is shown in green. It is the classic, “wide out, brake early, shave the apex, gas it and go” line. This works perfectly on the race track which is, of course, where it came from.

Great on the track, not so much on the road, as we will see.

The “wrong” line is shown in red. It involves turning in from the middle of your own lane, hitting the apex of the corner early and running way too wide on the run out of the corner. Sad to say I have seen many riders riders using this line while I have been following along at the tail of the field on group rides. No criticism intended here, so please don’t take offence.

Using this line can work, it just means that you have to lean the bike more to negotiate the corner. I’ve actually seen some riders use this line by choice just because it enables them to achieve extreme lean angles. But it fails miserably when the corner tightens part way through and you find that you’ve already used up all the available ground clearance and road at the same time.

The “correct” line for riding on the road is called here the “late” line and it is shown in yellow. It is similar to the “ideal” line in that it involves braking early and accelerating early, but it has the added safety feature of giving the rider much better visibility through the corner than the “ideal” one does. If you imagine yourself riding that “ideal” line, you can see that there will be a part of the exit of the corner, just past the apex, that will be a blind spot for you.

On the track this is not an issue, but on the road it is.

Because traffic could be lurking in this blind spot, the “late” apex approach is preferable for safety reasons. It allows you to “see” through the corner; it still allows you complete your braking early; it allows a smooth progress through the corner without histionics and it allows early acceleration out of the corner. It doesn’t “straighten” the corner quite as much as the “ideal” line does, but I can live with that because of the increased safety.

That’s for a right-hander. For a Left-hand corner, just reverse the positions. It’s pretty simple, really, isn’t it?

Forgive me if this is already part of your normal riding technique, but, if it isn’t, then please give it a few minutes of thought. Not only will you be faster through the corners, but you will be safer and more under control as you do so.

Riders ready to rock Mugello at round six

The Fastest of them All | Ralph Hudson | With Phil Hall