Wayne Maxwell has taken overall victory by a knife-edge at Perth’s Barbagallo Raceway, winning a closely-contested contest over Josh Waters by a mere half-a-point at round three of the QBE Australian Superbike Championship.

A final turn, final corner pass in yesterday’s race was the clincher for Team Honda’s Maxwell, who wasn’t going to let victory pass him by. 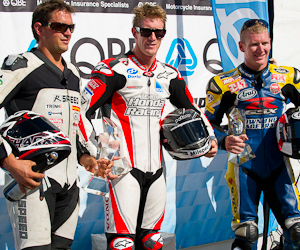 Maxwell and Team Suzuki’s Waters battled for the full 17-lap distance, with Waters appearing to take the advantage after Maxwell relinquished the lead running wide behind a backmarker.

Maxwell staged an entertaining fightback, and set up the thrilling pass with a strong run onto the long back straight.

There were millimetres in the move between the pair, great friends off track, but the fiercest of rivals with the visor down.

Greasy conditions saw riders contending with changing levels of grip throughout the race, with WA local using Ben Henry his intimate knowledge of the track to claim a hard-fought third place finish.

Cameron Stronach rounded out the top 5 on his BMW in a strong showing for local riders.

The Team Volvo Group Suzuki pilot stormed into the lead before Waters assumed control after a lap.

Unfortunately, his charge came to nothing when he was thrown spectacularly from his bike in a high-side crash at turn 1 a lap later.

The race was red-flagged on lap 9, with Waters declared victor and Allerton returned to second place.

Officials awarded half-points after the shortened affair, meaning Waters only claimed 12.5 points for his win while Maxwell took the full 25 yesterday.

34 points played 33.5 in a narrow victory for Maxwell, who moves to second in the race for QBE Australian Superbike Championship honours.

“It was a tough weekend with the conditions being wet and dry,” said Maxwell. “We had reasonable pace in the wet early on but it wasn’t ideal, and we were lucky to adapt quickly when it dried out.

“The bike wasn’t quite there but we worked hard to improve it.

“In the first race the conditions were really wet, and although we had good pace I nearly blew it 2 laps from the finish.

“We were lucky enough to get out of jail on the last corner and I was really stoked to get my second win of the year.

“In the dry we’re still working hard to find a setting with the new suspension. We’re slowly bridging the gap and it’s not for lack of trying – everyone’s giving it 110%.

“It’s only a matter of time until we’re back at the top.”

Waters added a fourth win to his 2012 tally and now leads the championship by 33.5 points.

“The whole weekend went pretty good,” said Waters. “Unfortunately that final race got cut short so I didn’t get full points and didn’t get the overall which would normally happen if you got a pole, a second and a first but these things happen.

“I have to say a huge thank you to the team who did a great job to be in the top 2 all weekend and I hope Robbie is okay after his crash.”

Defending champion Allerton battled hard on the BMW and holds down third on the standings despite a tough run in damp conditions yesterday.

The QBE Australian Superbike Championship returns to the track in a fortnight at Phillip Island, again racing alongside the V8 Supercars.