— Dungey makes it two in a row

Factory teammates Ken Roczen of Germany and French rider Marvin Musquin also had a strong day out with Roczen on the podium in third and Musquin in overall fifth. 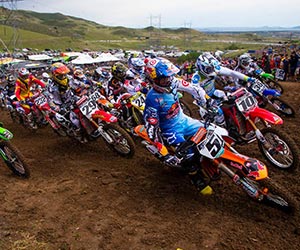 Dungey got off to a great start in moto one and was third at the first corner. He slipped past Andrew Short into second in Lap 2 and began to apply pressure on the leader Mike Alessi by lap six. Dungey shot past on his KTM 450 SX-F by the half way mark and continued to stretch his lead over the remaining laps. He was 20 seconds clear at the checkered flag.

A holeshot in the second moto put Dungey in the early lead, but Alessi passed him by the end of the opening lap. He sat behind Alessi until the fifth lap before regaining the lead. From then on he picked up two seconds advantage every lap to extend his lead to 22 seconds by the finish. With a 1-1 moto sweep, Dungey took his second consecutive 450 Motocross class win.

The Red Bull KTM’s two 250 cc class riders also had another strong result with Roczen finishing on his third consecutive podium, again in third place with a 5-2 finish and Musquin in fifth overall with a 6-4.

The first moto was delayed due to a big storm and Roczen immediately started to apply pressure in the opening moto with a close second at the opening corner tucked behind Barcia. Musquin had started outside the top 10 but had carved his way to fifth by lap three and was also looking at a top three spot.
But while Barcia and Roczen took charge of the race a hard charging Blake Baggett was quickly advancing through the pack. He slipped by Musquin in lap four and began to pressure the leaders. Barcia and Roczen held on with Bagget in third while Musquin finished fifth to set the tone for the second moto.

In the second moto it was again Barcia and Roczen in 1-2 by the end of the opening lap and Baggett, who had benefitted from a small crash by Musquin who slipped from third to fifth, was right in the mix by the third lap. He overtook Barcia and Roczen in lap seven and by lap nine Roczen was second. Then just one lap from the flag, a mistake cost Roczen two slots and he went on to finish fourth, just ahead of Musquin.