It was an eventful day for the championship, with a damp but drying tra 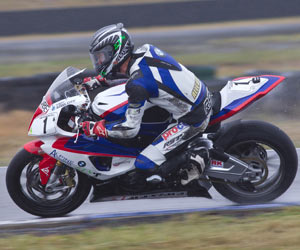 ck creating setup headaches for riders as they lined up for the opening 17-lap race.

From seventh on the grid, Racer’s Edge Suzuki rider Scott Charlton took the ultimate gamble, pitting following the warm-up lap to swap to his second bike and a dry setup with slick tyres.

Factory Suzuki riders Ben Attard and Josh Waters were in command early, with the points leader stretching his legs to build what would appear to be a comfortable gap.

However, the counter-strategy of Charlton proved to be a master stroke and one that saw him pick off rider after rider with relative ease.

By lap 7 Charlton had taken the lead, and greeted the chequered fla 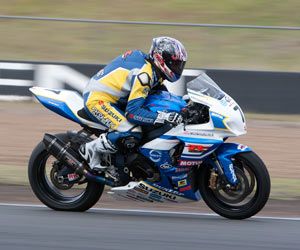 g close to 24 seconds clear of Waters who was battling on worn wet rubber.

“I went out there on the wet bike in the warm-up lap and there were a few dry lines,” said Charlton. “We were going to leave the dry bike in the shed but the team looked at the radar and said there was no more rain coming so we brought it into the pit lane in case.

“Six or seven laps in I could see the rubber was coming off the wets of the leaders and I knew I’d made the right choice.
“I can’t believe it actually, it’s a real confidence booster for me and such a great reward for the team who were spot on with the strategy and setup.”

Midday sun saw the track dry out and a hectic pace set from the outset of race 2, with the lead changing between polesitter Robbie Bugden and fellow Suzuki rider Attard in the early stages.

Stauffer made his move to the front on lap 2, clearly confident with his Honda’s settings in the dry, and maintained the advantage for the remaining fifteen laps as the scrap for the minor podium placings played out behind him.

He crossed the line 4.833s clear of defending champion Glenn Allerton and polesitter Robbie Bugden who recovered from a problematic opening race.

Stauffer was relieved to get his first win of the season and hoped he had put his struggles on the bike behind him. 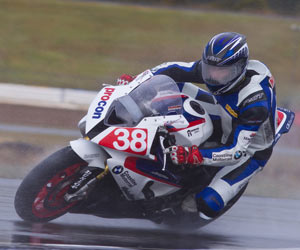 ster,” said Stauffer. “We made a big change last night that worked pretty well in this morning’s conditions, and then we kept the same kind of setup for the dry race which I was really comfortable with.

“I was able to control the race and keep a lead which was good, it shows we’re making progress with the bike.

“We didn’t get much dry running here but when we come back in September I definitely think everyone will be quick and the lap record will be easily broken.”

Bugden was left to rue a disastrous opening race where he fell from pole position to an eventual finishing position of 16th.

Like the rest of the field, he struggled on the treaded tyre but found himself caught up in another rider’s incident and ran onto the wet in-field. 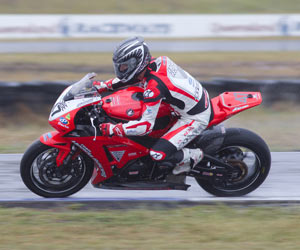 He knew he had the speed in the dry and pushed hard to salvage third this afternoon.

“The opening race was a disaster – like everyone I was on the wrong tyres and I didn’t have a good feeling for what the bike was doing,” said Bugden.

“As I was coming out of turn 3 there was a crash in front of me and I had to run off the track. The out-field was wet and I went down a lap trying to get back on and re-join.

“I thought we had the speed to go with Jamie this afternoon but I was caught in a battle with Glenn so had to settle with third.”

Wayne Maxwell circulated a lap down in the second race to collect points after his charge was slowed with a brake problem on lap 8.

While title rival Waters didn’t enjoy his best run of results, he was still able to increase his points advantage and now leads by 30.5 points with two rounds remaining.

The race for third in the championship is tight, with just half a point separating Stauffer (164.5 points) from Allerton (164 points).

Chas Hern led home the field in the Honda Prostock Championship taking the round win ahead of Linden Magee and Ben Nicolson.

A series of crashes cut short a dramatic day of racing in the Motul Australian Supersport Championship, with Brodie Waters emerging the victor despite crashing out of the second race.

Team Suzuki’s Brodie Waters battled back from seventh on the grid to claim third ahead of Hook and local favourite Brendan Clarke.

The second race was red-flagged after a turn 1 crash involving Yamaha rider Mike Jones, with the field resetting to their original grid positions for a full re-start.

Scott took the lead and began to stretch his legs again, unaware of a championship-changing crash behind him involving Mitchell Carr.

Carr came unstuck at the tricky turn 5 and was forced to wait out the rest of the race on the in-field. 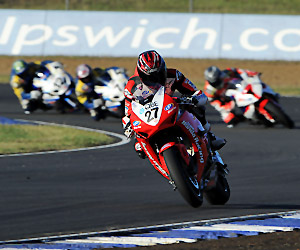 The damage to his title charge was minimised when Waters and Scott crashed heavily into the turn 1 sandtrap, resulting in a red-flag and the early declaration of the race.

Hook was awarded the win and half points, but a post-race protest saw Waters re-instated as race winner.

Carr leaves Queensland Raceway with a lead of just 4.5 points over Hook, with Waters still in check just 8 points further behind.

The QBE Australian Superbike Championships resume at Phillip Island on August 17, the penultimate event on the 7-round calendar.

Visit www.computime.com.au for a full listing of race and round results.