The 25-year-old becomes just the sixth rider in the sport’s history to record multiple Championship wins, both coming with Suzuki. 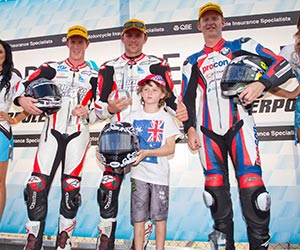 The Victorian rider was dominant early in the season, winning four races in quick succession and making his mark with a string of consistent podiums.

He came to Queensland Raceway with a 19.5-point lead and chose to maintain the necessary advantage rather than attempt to race wheel-to-wheel with outright pacesetter and round winner Jamie Stauffer.

Waters finished this morning’s race in fourth and was a comfortable sixth this afternoon to seal the title by 13.5 points over Team Honda’s Wayne Maxwell.

The elation was evident for Waters who has not campaigned a full season since his rookie year in 2009.

“It’s just great to make it official, I can’t thank the team enough for everything they’ve done and preparing a bike that I love to ride,” said Waters.

“It’s not been my best track and I knew I would have to be careful, I couldn’t match it with Jamie (Stauffer) today but for me it was more about just getting two consistent race finishes.

“It’s a great feeling and good to win my second title as it’s only my second full season on the Superbike.

“Wayne (Maxwell) was massively competitive all year and he did a really good job to cut back my lead – he had some bad luck early on and if it weren’t for that then it would have been neck and neck today.” 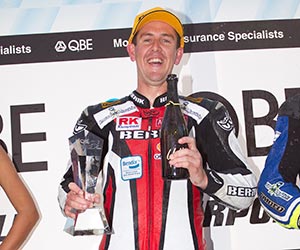 “We’ve been up against it since the early DNF,” said Maxwell. “We’ve been able to make up a lot of ground but in the end Josh was just too consistent.

“The team was obviously very quick this weekend and I’m happy with the progress we made but it was more of a case of something having to go wrong with Josh rather than us having to win.

“It’s been a really strong season for Team Honda and the whole team can hold their heads up at the end of the day.”

Stauffer’s clean sweep this weekend has him finishing a clear third in the Championship.

He added a new race lap record to his barn-storming run of results yesterday and said he couldn’t have asked for much more from the weekend.

“The bike has been good from Friday and been getting faster and faster each session,” said Stauffer.

“I seem to get my best results here and the conditions were good enough this weekend to be able to get out and run at the front.

“It’s a good finish to the season for myself and for Honda to get the 1-2.”

Stauffer has won 6 of the 8 races held at Queensland Raceway over the last 2 years. 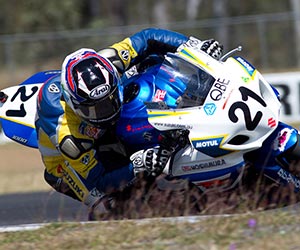 Outgoing Superbike Champion Glenn Allerton was third overall for the round on the back of a strong second place this morning.

The Procon Maxima BMW rider has been unable to match the form he showed when he carried the manufacturer to its first title in 2011, but has offered strong opposition to the frontrunners throughout every race.

He rounds out the year in fourth place, ahead of Suzuki’s Ben Attard, who was fifth.

Magee took over the lead from Chas Hern who fought back gallantly from mishaps in both races today.

The 24-year-old entered the event with a half-point lead, but lost the advantage by a point yesterday when Team Suzuki’s Brodie Waters trumped him for pole position.

The day’s opening race saw Carr, Waters and Honda rider Josh Hook engage in a spirited battle, with the lead swapping on a lap-by-lap basis.

Carr’s strengths were in the straights, with his Triumph 675 pulling away from the factory Suzuki and factory Honda out of the corners.

In a sudden the title hopes of Hook and Waters were dashed, suffering separate issues within seconds of each other at the end of lap 13.

Hook ran on at turn 6, a gearbox problem ending his race, while Waters lasted just a few hundred metres more before a cloud of smoke began trailing from his Suzuki on the front straight.

Neither were classified finishers, and Carr, the race winner by over 5 seconds, found himself back in charge of the Championship by a considerable margin.

The Triumph rider stayed clear of a ferocious four-rider battle in the second race which went the way of a resurgent Hook.

It moved the Honda rider to second and turned the spotlight to the arm wrestle between Waters and Glenn Scott.

Waters slipped underneath Scott in the final corner of the race to steal back second for the race and third for the Championship in what has been a testing day.

Finishing a solid sixth in race 2, Carr signed off his season 18.5 points clear of the runner-up.

The Triumph 675’s victory is a significant achievement for the manufacturer which was far outnumbered in the Supersport field.

Carr said he was proud to be able to deliver victory on the machine which he has ridden for the past two seasons.

“We’ve had our ups and downs this season and worked really hard to bounce back from a DNF earlier in the year,” said Carr.

“Unfortunately today it was Josh and Brodie’s turn, it was bad luck for them to end the season the way that they did.

“The bike has been amazing, I’ve really enjoyed racing it and developing it with the team.

“Consistency kept us right in the hunt there and we had the pace this morning to get the win, it’s an amazing result and testament to the team’s hard work.” 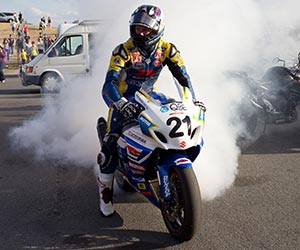 Class Champions were crowned across the board in an exciting day of racing today.

A full listing of all class race, round and Championship results can be found at www.computime.com.au