A sold out crowd of 71,009 filled the Georgia Dome to capacity on Saturday night, as Monster Energy AMA Supercross, an FIM World Championship, hosted its eighth race of the 2012 season. Following a strong start, Red Bull KTM’s Ryan Dungey fended off all challengers to take his second victory of the year. In the Eastern Regional Supercross Lites Class, GEICO Honda’s Justin Barcia remained undefeated in the second race of that championship. 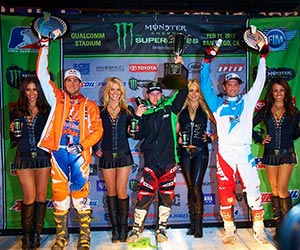 In his first race as a substitute rider for American Honda Muscle Milk, Cole Seely grabbed the Nuclear Cowboyz® Holeshot Award with Dungey and Toyota/Yamaha/JGRMX’s Davi Millsaps, of hot on his wheels. Behind them, championship leader Ryan Villopoto found himself in sixth aboard his Monster Energy Kawasaki at the conclusion of the opening lap. Fellow title contender, Toyota/Yamaha/JGRMX’s James Stewart was also slow out of the gates, crossing the line in ninth on Lap 1.

Seely fought off Dungey’s pressure for several laps, but the 2010 Supercross Class Champion eventually worked his way into the lead on Lap 7 and looked to pull away. As Dungey made his move forward, both Villopoto and Stewart were doing the same and by Lap 11, the trio was running first, second, and third, respectively. 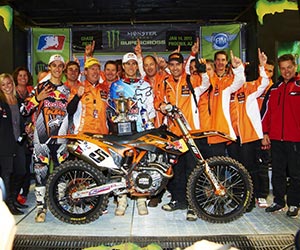 Villopoto slowly ate away at Dungey’s advantage throughout the second half of the main event, even overcoming an early tip over to have a shot at his fourth consecutive win. On the final lap, the pair was separated by just over a second, with Villopoto charging. A slight bobble by the defending champion coming out of the sand section allowed Dungey to extend his lead and give KTM just its second main event win in the Supercross Class.

“To get that first win right off the bat (for KTM) in Phoenix was nice, but it took a while after that,” said Dungey. “But, to back it up here in Atlanta, it was a great night. We’ve been looking for that one for a while. The whole team has been working hard and things haven’t gone our way with testing and stuff, but we’re coming around to it and I think things are progressively getting better.”

Villopoto held on for second, to lose just three points in the championship 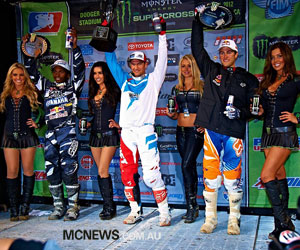 “I just made a little mistake, and early on in the race I fell over and that cost me, huge,” said Villopoto. “The track was tough tonight, you could really see (that) and I just slipped up and washed the front end out. Overall, we had a good night. It just wasn’t the best of weeks coming into this (race), so to come out with a second is good.”

In the Supercross Lites Class Main Event, Barcia was the first rider out of the gate, claiming the Nuclear Cowboyz® Holeshot Award, while Monster Energy/Pro Circuit/Kawasaki teammates Blake Baggett and Darryn Durham followed him out of the first corner. After posting the fastest practice lap of the day, Red Bull KTM’s Ken Roczen crossed the line at the end of the opening lap in 14th place, following a tough start.

Barcia set a torrid pace to start the 15-lap main event, pulling away to a multiple-second advantage over the field. Behind him, a heated battled for the podium took place between Baggett, Rockstar Energy Racing Suzuki’s Blake Wharton, of Beaumont, Texas, and GEICO Honda’s Justin Bogle, of Cushing, Okla.

Baggett asserted himself in second and after battling for several laps, Bogle worked his way past Wharton on Lap 9. Barcia completed his perfect effort by taking the checkered flag 2.253 seconds ahead of Baggett. Bogle held on for his first career podium finish in third, to go along with his first career heat race 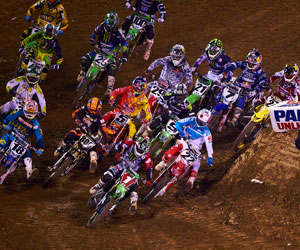 victory earlier in the evening.

“Two for two (is) not a bad way to start,” said Barcia. “I wanted a good start, I got the holeshot, and just rode hard from there. The track was super tough tonight. It was very slick and there were a lot of places where the bike was sliding around. I was trying not to make any mistakes. Fortunately, everything went really smooth and we got the win.”

Barcia extended his points lead in the Eastern Regional Supercross Lites Class to 12 over Durham. 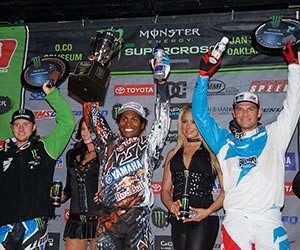 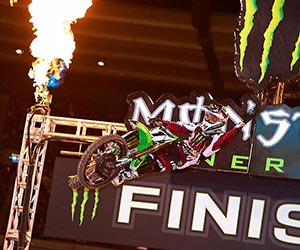 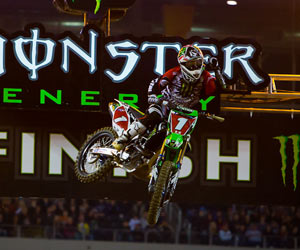 Red Bull/KTM Factory rider Ryan Dungey secured his second win of the season at the eighth round of the AMA Supercross Series in front of the sold out crowd of 70,000 fans at the Georgia Dome. It was KTM’s second win in this highly competitive class.

Earlier Dungey’s SX Lites teammate Kenny Roczen made the best if the worst to charge from the back of the pack to finish sixth and secure more championship points in his second outing of the season after pre- West Coast Lites season injury.

Dungey now moves to second place in the points, 10 behind leader and rival Ryan Villopoto with the top three in the championship standings again taking control of the podium.

Dungey looked confident all day. He qualified third fastest in the afternoon practice and recovered well from a third lap incident in his heat to finish second. He again had a good start in the main event and was second at the first corner behind Cole Seely. He made his move in the eighth lap then when he hit the front settled down to ride a smooth race to work towards his second win. With two laps to go, Dungey did encounter traffic problems with a back marker and this set up a great two-way battle with rival Villopoto for the top podium spot. Then on the final lap Dungey proved he is definitely in the championship hunt when he put another half second on Villopoto took his second victory of the season.

Ryan Dungey: “This was such a great way to end the week. “After seven weeks I finally got to return to the east coast and train at home. I came into this race feeling confident and refreshed and it all paid off today. My team did an amazing job on my KTM and we had no issues today, just a really great race.”

Roczen recovers to finish sixth
The night out in Atlanta was less satisfying for Red Bull KTM’s young German rider Kenny Roczen. It was in the main event of the Lites where he would have the most work to do when he suffered a clutch problem after the gate was held for an extended period of time. This caused him to leap forward before the drop, locking his front tire underneath the gate. Once untangled, Roczen shot down the start straight to round the first corner in dead last. He then charged past half the field to be in tenth at the halfway mark and worked hard in the next four laps to pick of other riders. Roczen was unable to close the eight-second gap to the leading five but still finished in the points and is currently lying fourth in the standings.

Ken Roczen: “I am really upset that I got stuck in the gate. It was hard coming through the pack in the first few laps because a lot of the slower riders don’t jump all of the jumps and I had to work harder to get around them. I was able to come up to sixth and almost got into the top five. I was happy with my line choices and glad to finish safely. I am looking forward to St. Louis and hopefully getting my first win of the season there.” 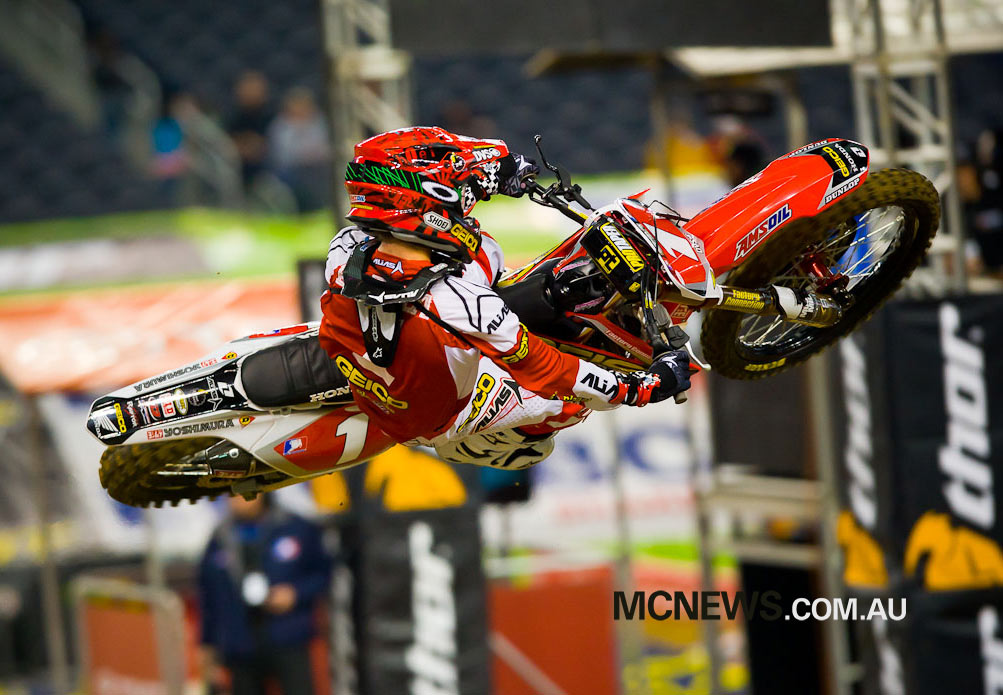 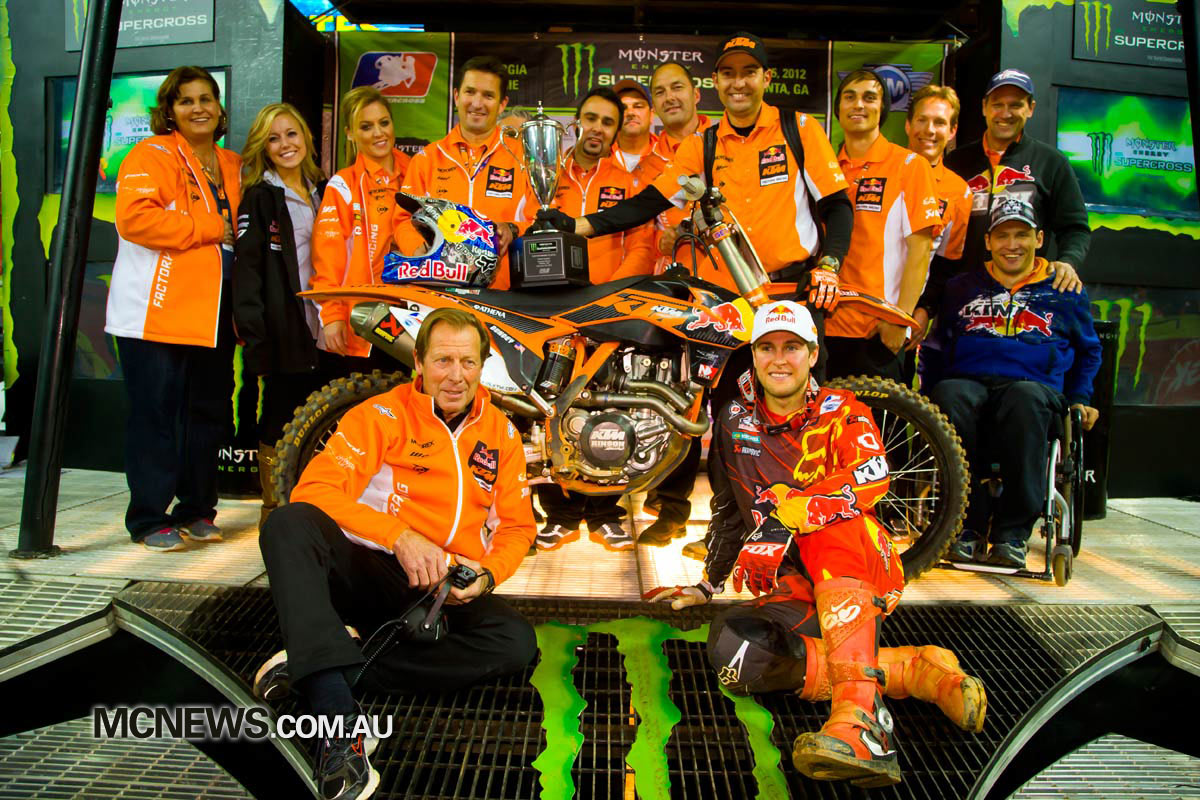 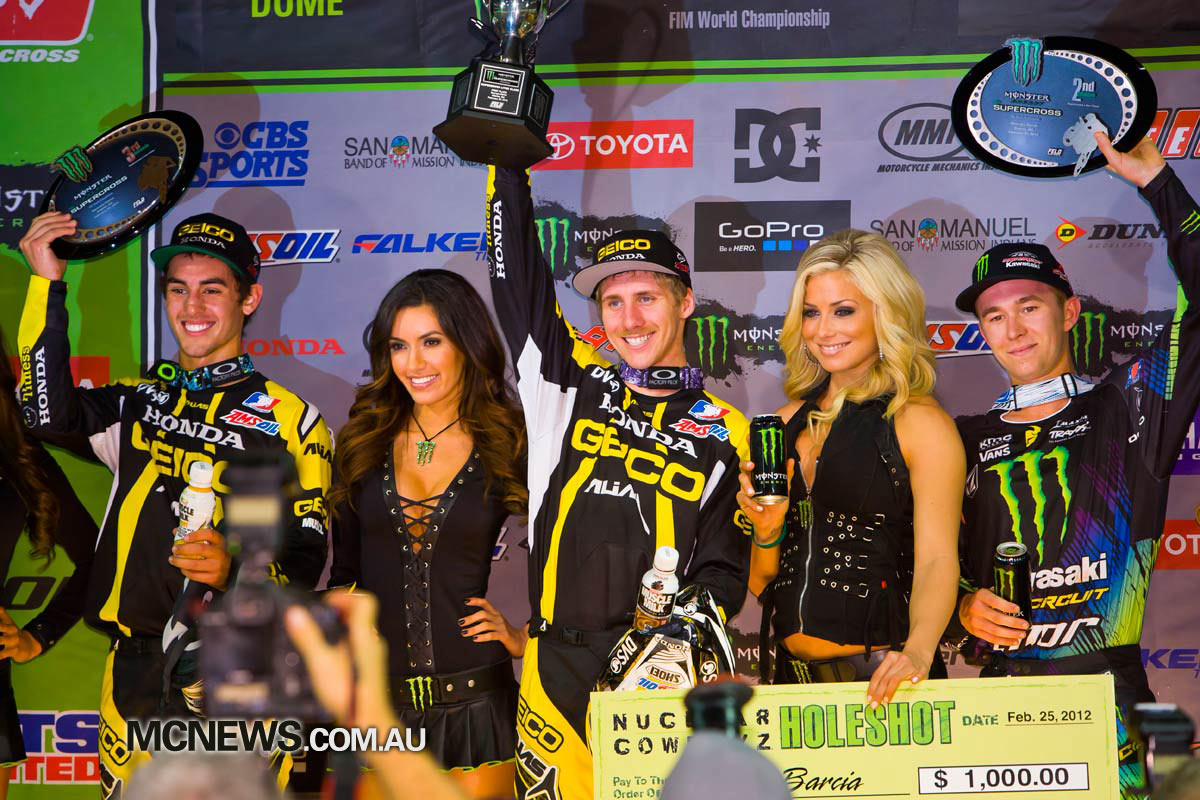 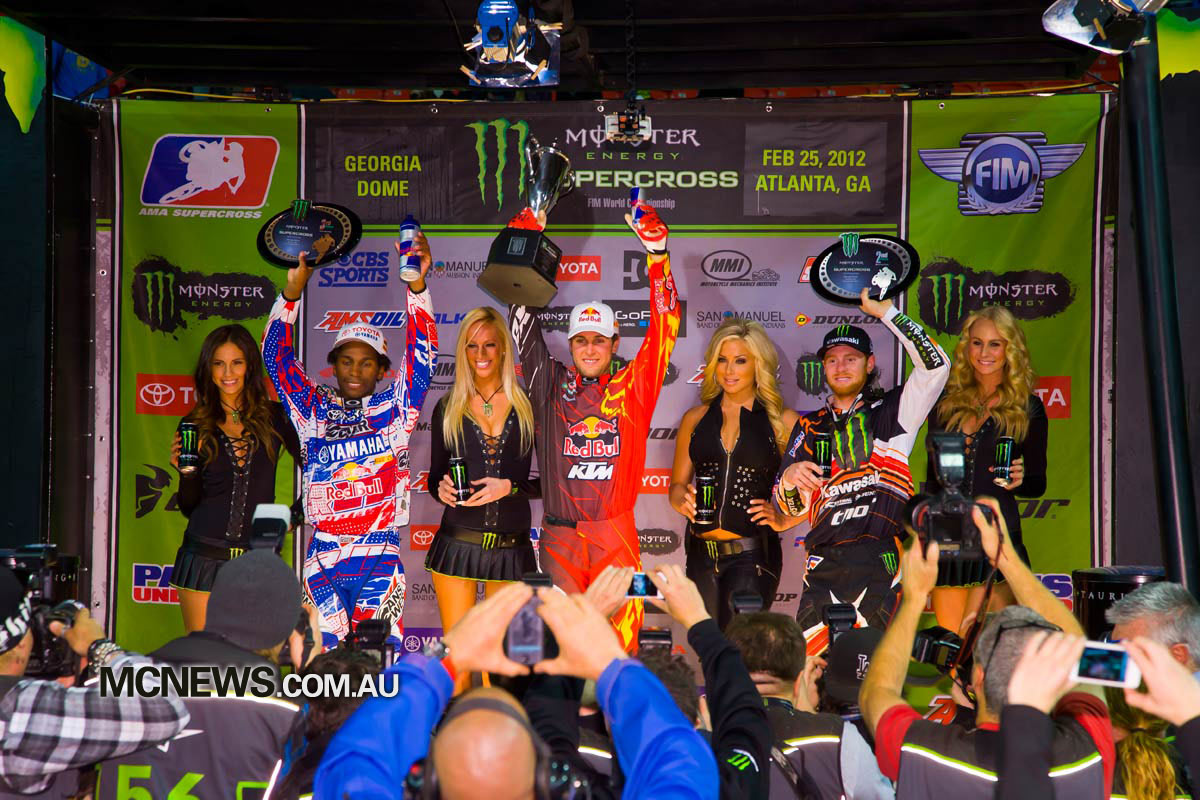 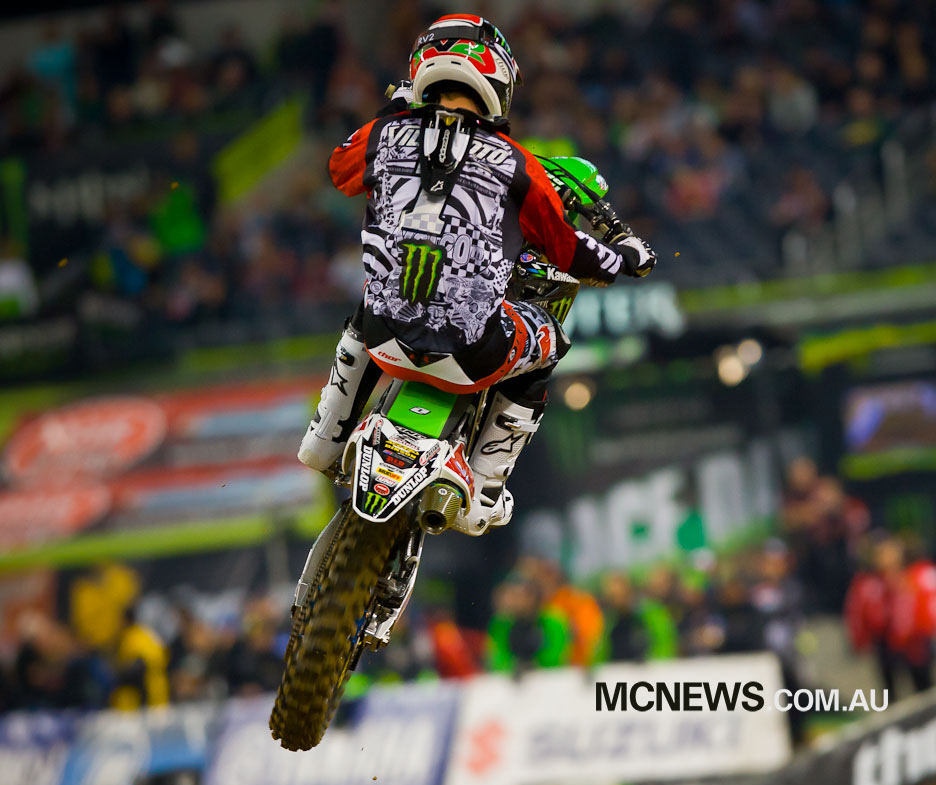