Michael Rutter made history again in Macau with a masterclass display which gave the 40-year-old a record-setting eighth victory on the 6.2km Guia circuit against a strong field of more than 20 riders.

The win meant Rutter’s domination of the weekend was almost total, his name on top of every time-sheet bar one ending with a late afternoon victory which had never seemed to be in doubt since he rode out to first practice at 7.30am on Thursday morning on his SMT Honda.

His race was hallmarked by a fast start that never really saw him challenged until half-distance, when Martin Jessop recovered from a poor start to fight his way back to second spot, going from fourth to second in a single lap.

But Rutter was already too far ahead to catch, and though Jessop used the power of the Riders’ Motorcycles Ducati to full advantage on the long fast straights from the Melco Hairpin to Lisboa, Rutter’s mastery of the technical and challenging middle sector of the circuit won back more than he’d given away on the high-speed runs and he eased away from Jessop on every lap until the last, when he cruised home to an effortless win.

Simon Andrews claimed a strong third after some very racy laps early on, his best result in four visits to the Macau Grand Prix, provoking exuberant celebrations in pitlane from the Ice Valley BMW team.

Said Rutter after his lucky eighth victory: “The team gave me a brilliant bike. The crowds have been fantastic. I enjoy coming here and hope it will keep continuing.”

Michael once again made the race his own and was fastest in the majority of practice and qualifying sessions. Gently building up his pace over the week he was third in the opening practice session but was soon up to speed and putting in some good times and topped every session for the rest of the week. The first qualifying session was cut short after only ten minutes due to a serious accident. The remaining sessions were also hindered with wet weather and delays, despite this Michael still continued to dominate the time sheets and qualified on pole for the race.

The scheduled first race was postponed due to poor weather conditions and eventually took place this morning UK time at 0815. Michael got off the line well and soon passed Gary Johnson to take the lead by the end of the first lap; he was soon pulling a gap over the rest of the pack. Jessopp was soon putting in fastest race laps and was bridging the gap, as soon as Michael was signalled this information he upped his game and managed to win the race by 4.9 seconds, Michael was 11.2 seconds ahead of eventual third placed man Simon Andrews.

Michael – “Firstly I must pass on my thoughts and condolences to the family and friends of Luis Carreira who we sadly lost in the first qualifying session. It marred the rest of the week but as we all know in racing we have to keep strong and carry on. It was a mixed week with accidents and also weather problems that seemed to put delays on everything. It’s hard to keep focused and in the zone when session are cancelled or postponed. The week seemed a long one as the other sessions were delayed after darkness fell and then the race delayed due to wet weather.

“I’m really pleased however, with how everything went on the Jezac SMT Honda, everyone worked really well together and despite not riding a Honda for a few years everything felt good from the off. We took it steady on the first session and just tried to find our feet get a good set up on the bike and ready for the remaining session over the three days.

“Once everything was working right I got my head down and wanted to put in some good lap times from the start, I was able to be consistent through both qualifying and practice and was able to set pole position. I was once again fastest in warm-up and really looking forward to getting out there and race the Jezac SMT Honda. I got a bit of a bad start and Gary (Johnson) shot out the blocks but I needed to make sure I got past him early on. I got through and got my head down, I noticed Martin (Jessopp) was catching me and I just wanted to remain at the front and focussed on the job in hand, I could see the gap was going back up and just stayed with that pace for the rest of the race.

“I’m over the moon to have gone into the record books again with win number eight; I really enjoy coming here and hope I can continue for a few more years yet. I’d like to thank all my loyal sponsors for supporting me this year through a tough season and I’m glad I’ve been able to end the season on a high and repay them for everything they have done for me. Now I’m looking at finalising my plans for 2013 and hope to be able to announce something soon.”

The new BMW HP4 made its race debut this weekend, shortly before its market launch in December 2012. Rico Penzkofer rode a production version of the new BMW Motorrad supersports bike at the 46th Macau Grand Prix, which was held on the 6.2-kilometre Guia street circuit. It was the final race of Penzkofer’s professional career. The Penz13.com BMW Racing Team and BMW Motorrad HP RaceSupport were responsible for running Penzkofer’s bike at the event. The specialists department supported the BMW riders on site.

The race weekend in Macau was overshadowed by two tragic incidents. On Thursday, Portuguese rider Luis Filipe de Sousa Carreira was tragically killed in a crash during qualifying for the Motorbike Grand Prix. One day later, Philip Yau from Hong Kong died following a crash in qualifying ahead of the CTM Macau Touring Car Cup. The thoughts and deepest sympathy of BMW Motorrad are with the relatives and loved ones of the victims in these most difficult times.

Shortly before heading to Macau, Penzkofer used a roll-out at Czech Most to get acquainted with the new BMW HP4. In Macau, the team and BMW Motorrad HP RaceSupport used the available practice time for setting up the production bike to the special characteristics of the Guia street circuit. Penzkofer continuously improved his lap times and qualified 13th on the grid. However, he and the other riders then had to be patient. Due to rain, the race had to be postponed for 24 hours and was re-scheduled for today.

The race was started in the late afternoon and was shortened from 15 to ten laps because of the dusk. In the early stages of the race, Penzkofer improved one position and kept 12th place until the closing laps. However, he then slipped back and finished 17th. In total, 24 riders took part with Michael Rutter (GBR / Honda) winning the race. His compatriot Simon Andrews finished third on his BMW S 1000 RR, claiming the historic first ever podium finish for BMW at the Macau Grand Prix. The German BMW rider Didier Grams crossed the line in 14th on his RR.

“Obviously, we were very strongly affected by the loss of Luis and Phillip. Our thoughts are with their relatives. I knew Luis from the races we contested together and it was a very sad and difficult situation for all of us,” said Penzkofer. “Regarding the sporting aspects, I am very happy with the weekend. I want to thank BMW Motorrad for giving me the opportunity to race the brand new BMW HP4 here in Macau at my final outing as a professional rider. The bike is great. It should be borne in mind that I rode a production version that was only slightly modified for racing. It is incredible, what this production bike is able to do. There is not much difference to a pure racing machine.”

“A big ‘Thank you’ also goes to HP RaceSupport,” Penzkofer continued. “The on-site support was a big help for us because of course we first had to get familiar with the BMW HP4. But together with HP RaceSupport we headed in the right direction setting up the bike. The race itself went well, too. However, in the closing stages it was obvious that the leading group was out of reach. So I decided to slow down a little bit to appreciate and take in my final laps as a professional rider. I will now focus on my role as Team Director of my Penz13.com Racing Team, who won the title in this year’s FIM World Endurance Superstock Cup.”

“The fatal crashes suffered by Luis and Philip were a big shock to us all,” said Berthold Hauser, Head of BMW Motorrad HP RaceSupport. “It is always dreadful when such tragic accidents happen. All our thoughts go out to their relatives, and we would like to express our deepest sympathy. Serious accidents like these cast a shadow over everything else, and our joy at the successful race debut of our BMW HP4 has understandably been tempered somewhat. Of course, to enter a brand new motorcycle is always a jump into the deep end but the first outing of the bike went very well. Technically, the BMW HP4 is very reliable and as a production bike, it has proven to be pretty competitive. In addition, we collected a lot of data with the new bike and the Dynamic Damper Control DDC, which was used in a race for the first time. The reactions of the other riders have been positive, too. We are happy that we could provide Rico with such a good bike for his final race. Congratulations go to Simon Andrews, who secured the first ever Macau podium finish for BMW with his BMW S 1000 RR.”

The BMW HP4 is the continuation of BMW Motorrad’s HP series, which was first launched in 2005. Following the HP2 Enduro, HP2 Megamoto and HP2 Sport twin-engine models, the HP4 is the first four-cylinder bike in the HP series. The motorcycle is based on the BMW S 1000 RR and the production model includes such features as Race ABS, Dynamic Damper Control (DDC) and Dynamic Traction Control (DTC). 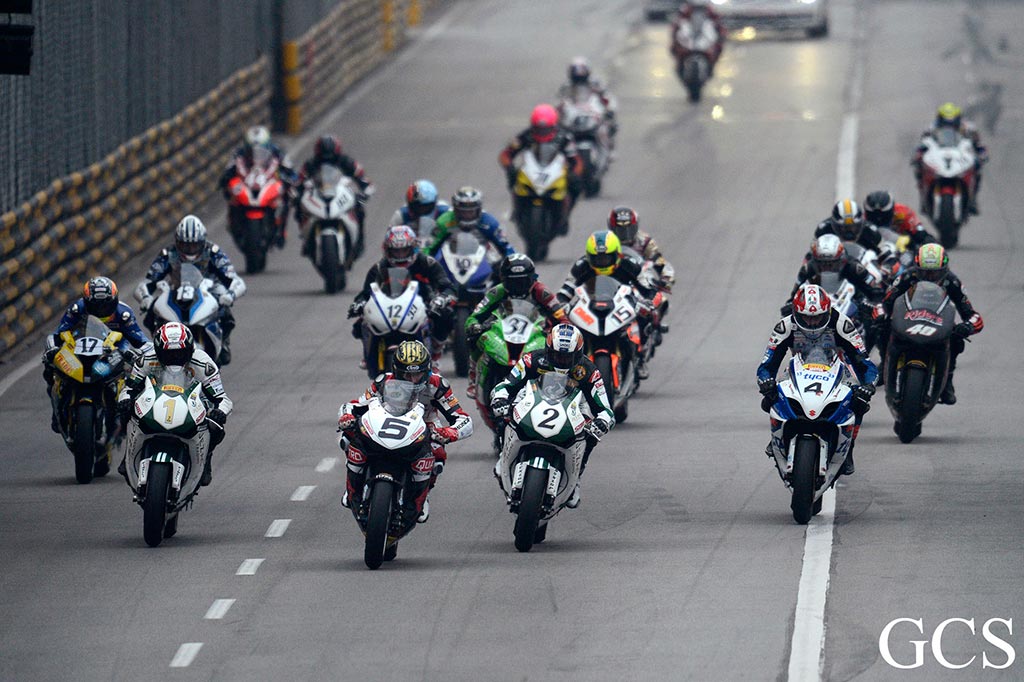