Jeremy Seewer battled hard in both motos as he took his fifth MX2 GP at the MXGP of Sweden. On a day where the weather conditions were constantly changing, the Uddevalla track provided a real test for all the riders, but Seewer coped the best and topped the scores with 44pts.

Australian youngster Hunter Lawrence was right in the thick of the action at the front of the pack in the second moto and was on course for a strong podium result before a costly fall saw him have to battle back up to sixth. Combined with his 12th place result in the opening moto that gave Lawrence ninth overall for the round, a position he mirrors in the overall MX2 standings.

“The first moto was difficult, I got an ok start, around 15th but on the fifth corner another rider ran into the back of me and I crashed and had to start from last. I passed a lot of riders and got back to 12th but it wasn’t great to have to do that. In the second moto I got a very good start in the top five or six. I moved into second quickly but Covington was on my rear and putting pressure on me. I took a line a bit too rushed and came off just before the wall jump. It was the worst place to crash on the track and it took a bit to get going. I fought hard to come home in sixth, it just could have been better. A lot of positives though, riding is good, speed is good both motos, I just needed to put it all together.”

The two title contenders Seewer and Red Bull KTM Factory Racing’s Pauls Jonass start 4th and 7th but by the end of the first lap where in 3rd and 5th respectively. Behind Seewer and in front of Jonass was Rockstar Energy Husqvarna Factory Racing’s Conrad Mewse. Mewse managed to hold off the points leader for the first laps before losing the position.

As Prado ran away with the lead Seewer pushed to reach Lieber but fell in a corner and he picked up just ahead of Jonass nearly being passed. Lieber then made a mistake, fell out of second, and remounted in 4th before making more errors and dropping to 13th.

At the finish it was Prado winning by just under 2 seconds then Jonass 28 seconds back of the lead. Conrad Mewse held on to finish 4th and HSF Motorsport Team’s Brian Bogers took 5th.

Race 2 had an identical Fox holeshot taken by Prado, his 14th this season. Behind Prado was his teammate Jonass then Rockstar Energy Factory Racing’s Thomas Covington and Seewer. Covington passed Jonass on the open corner and when Jonass retaliated it slowed the pair enough to not only let Seewer by but also his Suzuki World MX2 teammate Hunter Lawrence.

Throughout it all Covington maintained his position ahead of Jonass and Seewer went after Prado. On lap 5 Seewer took over the lead and one lap later Lawrence and Covington passed Prado as well. The Spaniard was then left to fend off his teammate who made a quick and decisive move to take the spot away.

On the last lap Covington showed amazing speed and caught Seewer leaping past the Swiss rider into the last corner to end the race in a photo finish. Covington took the race win to the disappointment of Seewer.

In the overall Seewer took the win, the 5th of his career and season.

“In the first moto I got a decent start and made my way to third position, where I then made a small mistake. That only cost me a few seconds, but it would prove crucial in the end as I came home in second, really close to Jorge Prado in first. And then in the second moto I got a really good start with the KTM duo up front. I made the passes happen and moved into the lead really quickly. I had my team mate Lawrence on my back in second place, in between me and Thomas Covington who was riding really well. I did my best all the race, I made a few mistakes near the end and of course I’m frustrated he passed me on that last corner but he was just on another level on those last couple of laps. It was frustrating on one side but I’m really happy to have got my fifth GP win this year, which is awesome for everyone in the Suzuki World MX2 team. I’m just enjoying racing so much at the moment and I’m having a lot of fun. The championship is important and it won’t be easy with just three to go, but we shall see how it goes.” 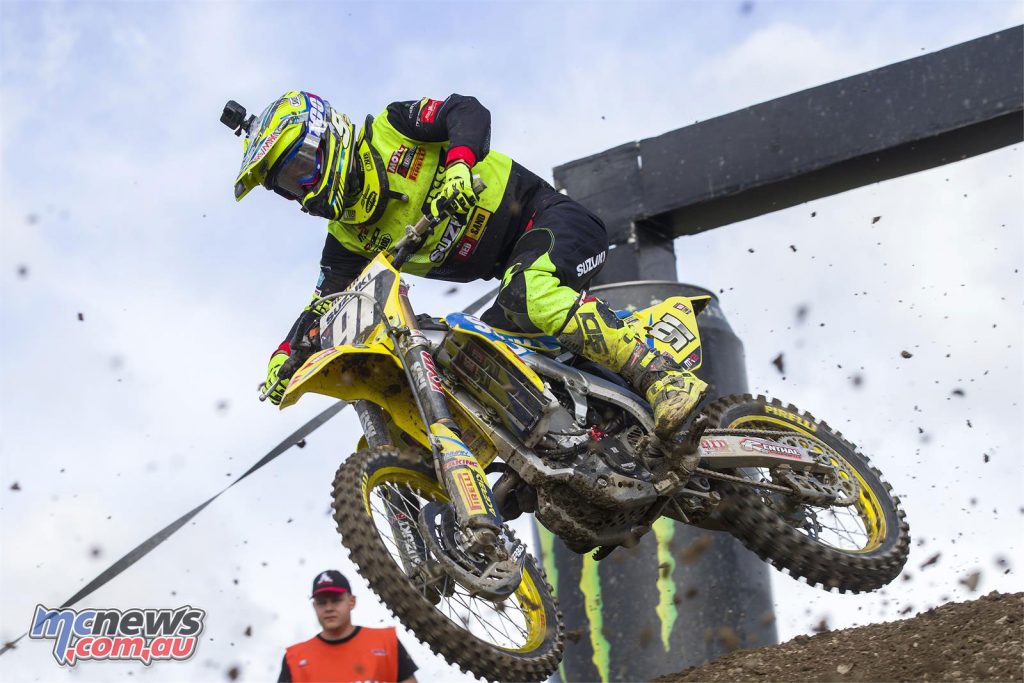 Jorge Prado took second after a hard fought 5th in race 2 for his 4th podium this season.

“I made two really good starts today and in the first moto I didn’t spent too much energy. The set-up on the bike was just perfect. The track was a bit different in the second moto and I just couldn’t go any faster. I fought all the way until the last lap and passed Paturel and Lawrence back to get second overall. I was really happy with my riding. I cannot say this is my best track but I think I am riding well quite now and physically I am quite strong. I hope I can do some nice races before the end of the season.” 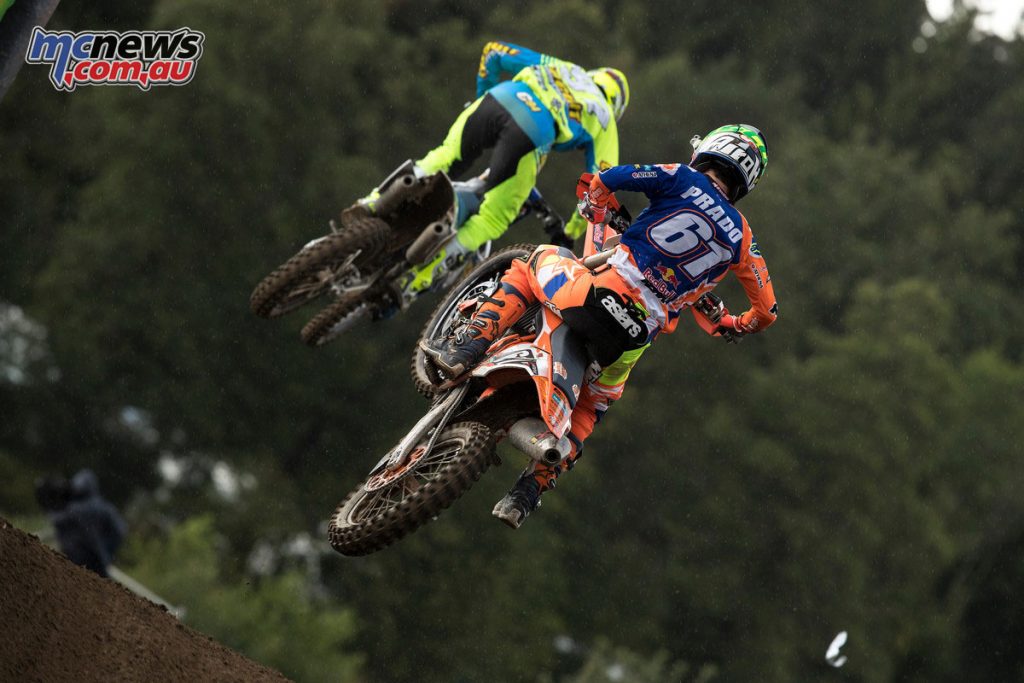 Pauls Jonass scored valuable points but the gap has now dropped to 45 between him and Seewer.

“For the second weekend in a row we are third and I’m not too happy with that but we made the podium again and it is always good to be consistent. I didn’t have my best weekend and it seemed Saturday went better than today! I made some mistakes in both motos but still managed to salvage two third places and only lost a couple of points in the championship. I need to focus in the last races. I am feeling good. We’ll have a few days off now and then get right back to work.” 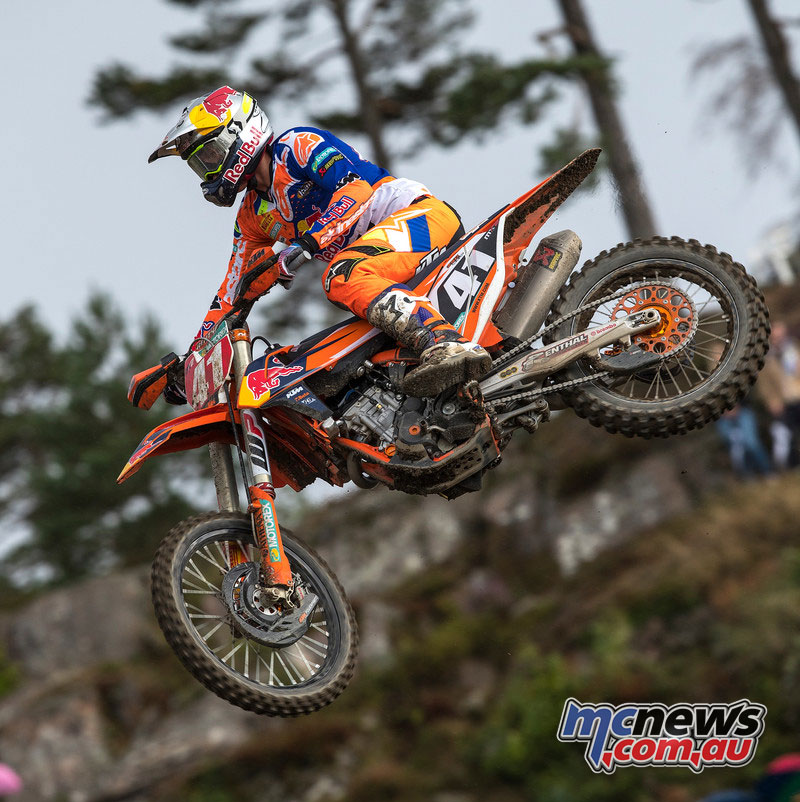 “I’m really happy with getting fourth overall in Sweden. It’s the best overall result of my career in MX2 and it’s the best reward for all the hard work we’ve been putting in. Following my good fifth place result in qualifying I got off to a good start in the opening moto and was running in third for the first corners. After a few laps things cleared out and I could focus on myself. I rode my own moto and came home in fourth place. Then in moto two my start wasn’t that good. I started the race outside the top 10 and slowly got myself up to eighth at the finish line making a few good passes along the way. I’m now hoping we can continue this momentum going into the last part of the series.” 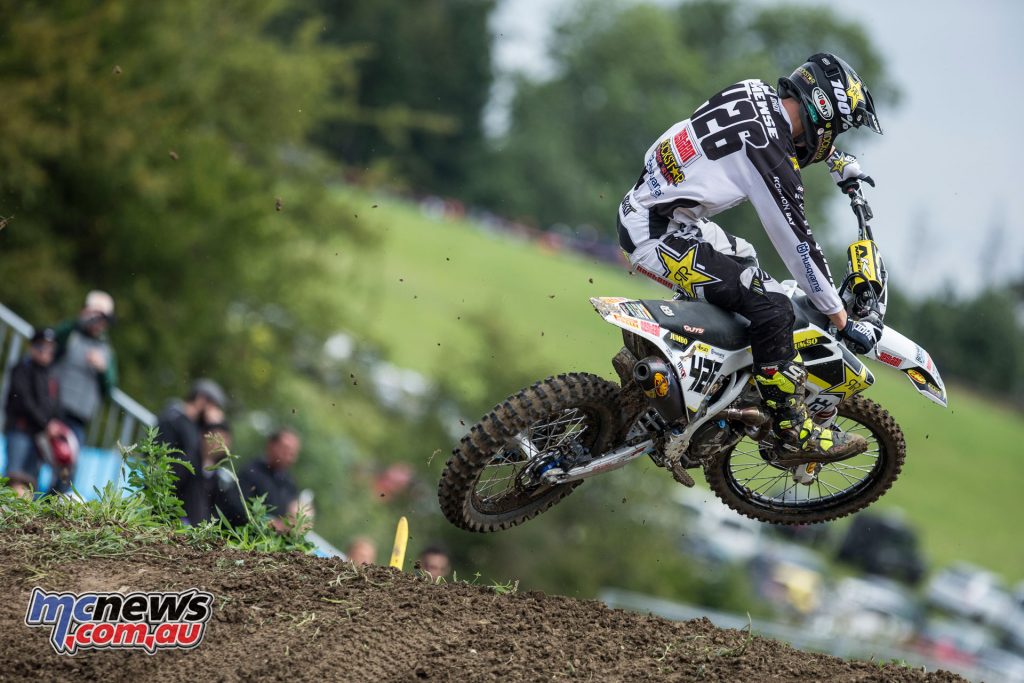 “It’s been a tough GP for me so I’m satisfied I managed to turn things around and get the victory in the final moto. Following a crash in the qualifying moto I didn’t have a great starting position. In moto one I got a good start but a few laps into the race another rider crashed in front of me. I got back up and started charging but then again I made a mistake coming off the track. Eventually I crossed the line in 16th place. For moto two I decided to make a few changes. I had a different plan for the start and it worked out pretty well. Spending the first half of the race battling for the top three, I could see that my speed was good compared to the riders in front. Putting myself in second five laps before the end I saw that Jeremy Seewer had a steady pace. I decided to go for it and on the jump before the last corner I stayed on the gas and managed to make the pass for the win. We’re now heading to the US and I can’t wait to race on my home soil.” 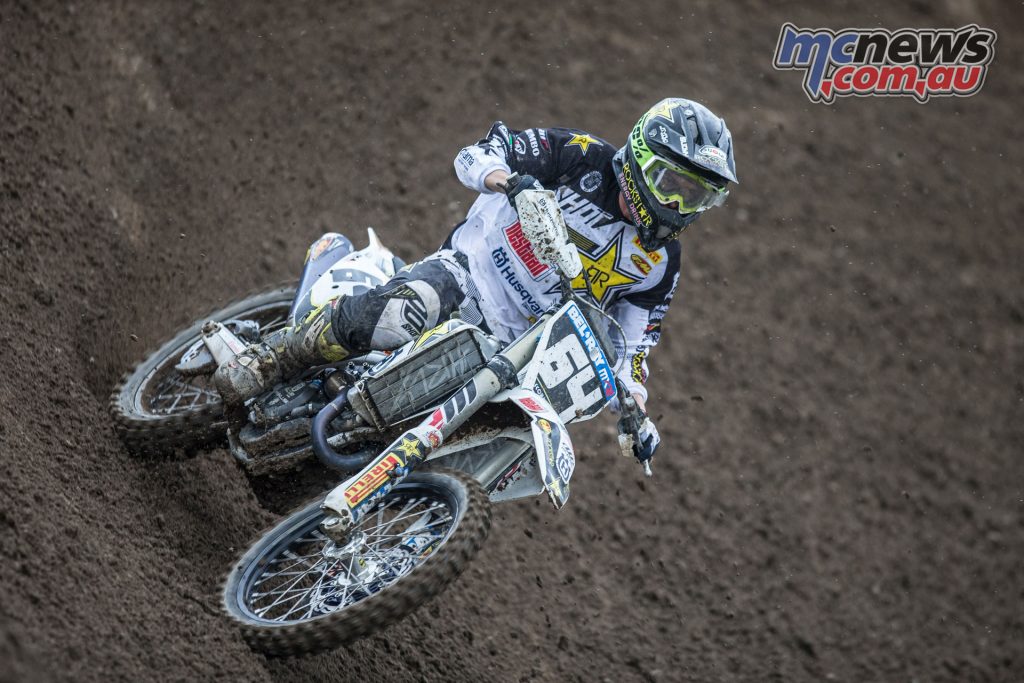 “I’m satisfied with my performance in the second race. In the opening moto I didn’t manage to get a good feeling. I was struggling to remain fast so I had to settle for a ninth-place result at the chequered flag. I decided to approach moto two with a completely different mind-set and that worked out quite well. Starting outside the top 10 I made a few good passes. I was feeling good on my bike so managed to get fourth at the line for sixth overall at the GP. We take the positives from this second moto and move on to the next round in the US.” 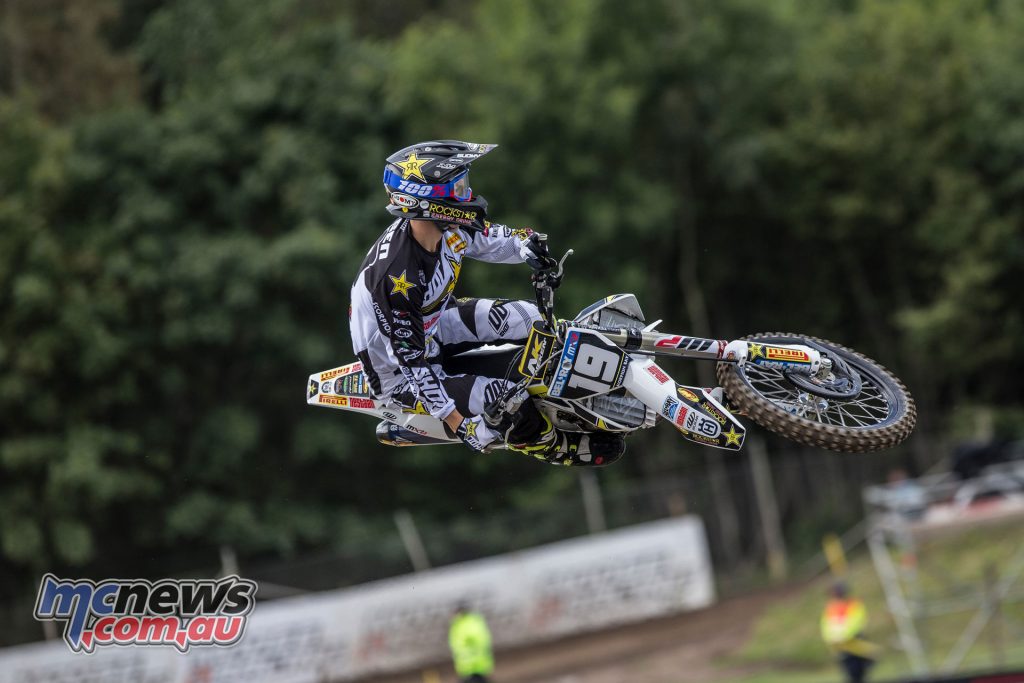