Seth Crump takes the SS300 round win at Hidden Valley

Bramich retained his championship lead on 246 points, with Levy second on 2018. Third is Harry Khouri on 201 points.

Tom Bramich went from fourth on the grid to take out race one of the Australian Supersport 300 class at ASBK Round 4 at Hidden Valley Raceway.

Bramich took the victory by just 0.13 seconds from Oli Bayliss who started on pole, after qualifying fastest earlier in the day. The racing was chaotic with passes consistently throughout the race, but Bramich just got the better of Bayliss down the final straight.

“You are never out of the game in this class and that is handy when you don’t have the outright pace, but I was really lucky to execute my plan. I tried to hold the field up in the slow corners and then get a really good exit out of the final corner and win the drag to the line, which I did but it probably won’t happen again.”

As usual in the Australian Supersport 300 it was a close affair with Olly Simpson landing himself in third position but finishing just 0.65s off winner Bramich. In fourth position it was Seth Crump who started the race from second position but just couldn’t make a move down the straight to land on the podium.

Zac Levy rounded out the top five and was in contention with the lead group as was Tayla Relph who had to settle for sixth.

Crump fought off a fast finishing Levy, Bramich and Simpson to take his first win in the Australian Supersport 300 class at Hidden Valley. Aboard his single cylinder KTM, Crump managed to hold off Levy down the final straight to take out race two.

The start belonged to Oli Bayliss who got off the line well, but a fall on lap three saw Bayliss out of the race. Crump took the ascendency from there on, but it would be Levy who made his pass for the lead on lap 6 and went to try a pull away. Crump didn’t waste much time to get the lead back, making the move back on Levy on lap 7.

“That was an awesome race, when Oli and I got away at the start, I felt my bike sliding but I just had to slow it down and keep it on two wheels. My battle with Zac was tough and I just held him off and it was great to take the win.”

Race one winner Bramich would have to settle for third place after a slow start saw him have to play catch up. Simpson would be the unlucky one in the lead pack missing out on the podium despite only being 0.520s off the race win.

Rounding out the top five was Khouri, who put in a great performance around the 2.87km Hidden Valley Raceway circuit.

Taylor and Relph battled it out for sixth but it would be Taylor who got the better of the battle, but an impressive ride from one of the youngest riders in the Australian Supersport 300 Max Stauffer saw him finish in eighth.

It was another exciting affair for Australian Supersport 300 race three, as Crump completed a Sunday double victory. The race could have been won by up to nine riders in the closing stages with the group separated by just over one second.

With a lap to go it seemed like the victory would go down to either Bramich or Bayliss, but it would be Crump to gain the ascendency in the final corners, as Bayliss was run wide. As he pulled onto the main straight, Crump knew he had the victory in hand as Bramich could not match the straight-line speed of the KTM.

With Crump taking the victory, he was followed by Bramich in second, Levy in third followed by Bayliss and Oli Simpson.

“That was an awesome race and to win the round is even better. I have to thank Jamie Stauffer because he helped me with the setup of the bike after that last race with the sliding I was experiencing.”

“It has been a great round for us in the championship. Unfortunately, Oli had a crash in race two so I managed to pull a few points away from him. I’m really looking forward to Morgan Park Raceway.”

“I just tried to ride the race as usual at hope for a last lap dash but we got held up in the hairpin out the back and Oli went around the outside of me and onto the grass. I then had to settle for third but I’m pretty happy with the result.”

Crump won the overall round, with Bramich and Levy in second and third. The current points standings have Bramich extend his advantage to 246 points followed by Levy on 218 and Harry Khouri on 201. 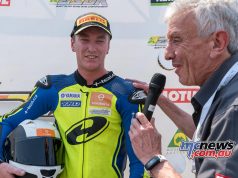