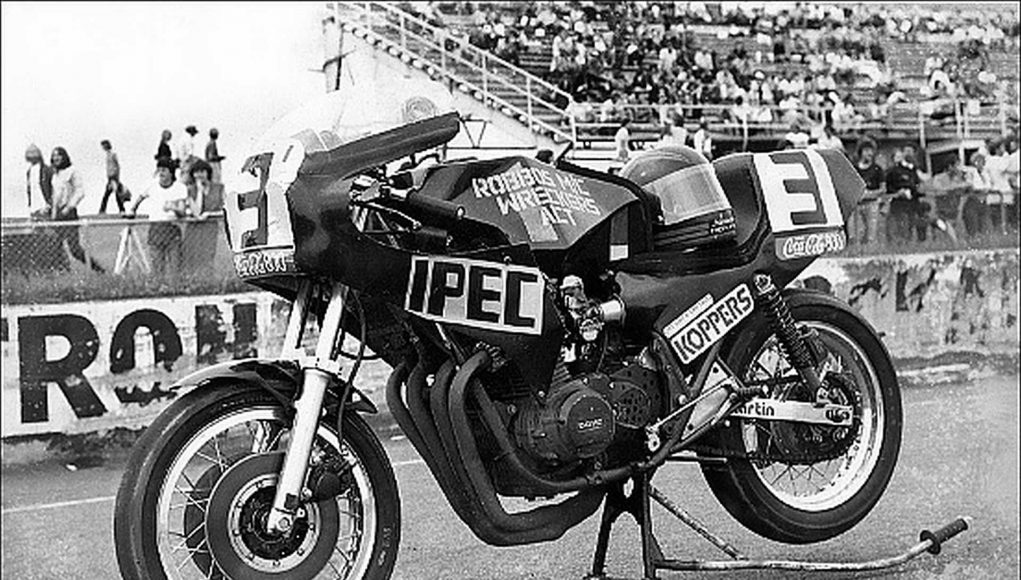 I have always said that nobody looks after their mates like motorcyclists do. Over my 40 plus years of motorcycling I have proved this time and time again. While pondering on what to write this week it occurred to me that there is a story in there that is worth telling. As usual, it’s in two parts so please bear with me.

It is February 1981. A group of impecunious students from Canberra are in the pits at Sydney’s Oran Park Raceway waiting anxiously the start of the Coca Cola 800 endurance race. The skies are grey and threatening and every one of the people involved in the project is wondering whether they have done their bit right and what the next nine hours or so is going to bring.

The Shadowfax Kawasaki was a true home-grown project. Built by a bunch of guys whose collection of ideas was far greater than the collective worth of their wallets and driven by bike owner Kent Miklenda who was determined to build and race a genuine endurance racing bike.

Built to the same spirit but with a fraction of the budget, the bike was rough and ready but had the right stuff and the enthusiasm of a whole team and a plethora of club members who had watched it being built, willing the bike to success.

One of the critical areas where corners had been cut (reluctantly) was the alternator on the left hand side of the 1050 engine. The race would not be contested into the night so lights were not necessary but time and constraints had meant that the stock alternator was still in place.

Ideally it should have been removed, the shaft on which it was mounted cut off and a dummy cover plate installed in its place. The stock alternator cover stuck out a long way and restricted considerably, the ground clearance on left hand corners. The top Prototype bikes were running minus alternator, using a “total loss” electrical system. In the end, the Shadowfax was not.

The bike was fast, stable and competitive. Kent qualified the bike well and was running within the top ten when the first rider change happened. Sadly the “take it easy” instruction went out the window the moment the change took place and Neil proceeded to set faster and faster lap times as he pushed towards the front.

The result was inevitable. Well before the next rider change was due, the bike was back in the pits with oil leaking from the ground-out alternator cover. Did I mention that the guys didn’t have much money? Yes, I did, and not having an endless supply of funds meant that a spare alternator cover wasn’t in the spares inventory.

While the race continued and the bike lay idle in the pits, losing laps at an alarming rate, appeals went out on the PA for anyone who would be prepared to lend the team an alternator cover. A new, replacement one was promised at the conclusion of the race but to no avail.

After what seemed like ages (I know, I was commentating and making the appeals,) a spectator appeared who was prepared to help. He stressed that the cover had to be returned in useable condition at the end of the race as he had to ride home that night, so the bike was brought to the pits, the change-over was carried out and Kent went back out to try and make up laps “carefully”.

There was to be no fairy tale ending. At the next rider change, Neil refused to go out and ride at all so more time was wasted until Kent was able to go out again and conclude the race without running the risk of exceeding the maximum amount of time that any one rider was allowed to ride.

The bike finished the race, still running strongly but, having lost so many laps, it was not classified as a finisher. The alternator cover was still in fair condition and was returned to its owner and refitted to his bike. Of such dramas is every endurance race littered.

Before the bike raced next (at the March road closure in Canberra) the alternator was removed and a proper cover plate was fitted but that was, of course, too little and too late.

Fast forward to the Island Classic 2014. Among the competitors in Team USA was Wade Boyd, sidecar racer extraordinaire and proud possessor of the famous purple hair.

Having found out at the last minute that his sidecar outfit had been deemed ineligible for the IC, Wade determined that he’d use his entry to race in the solo class anyway (he is a vastly experienced solo racer as well as being a champion sidecar pilot).

Out of the depths of the Aladdin’s Cave that is his garage (trust me, I’ve seen it) ,he dragged out a trusty Kawasaki Z1000 road bike. In a matter of weeks, he completed the job of making the bike into some sort of road racing machine and it made it to the shipping container heading for PI “just in time.”

At first sight on unpacking day it seemed to me that Wade must have misread the Supp’ Regs, as the bike sure didn’t look much like a race bike to me. It looked more like it belonged in a custom bike show, however Mr Boyd is famous for thinking outside of the box and doing things his way.

After a few shakedown laps, it actually looked like the bike was pretty sound. It was seriously lacking in power and in ground clearance (where have you heard that before?), but it seemed that Wade would at least be able to get into the show and have some fun.

It wasn’t to be. The clutch was dragging and it was getting worse and worse. And Wade was thousands of kilometres from home and without spares… are you seeing a pattern here? As unofficial “gofer” for Team USA, it seemed to me that I ought to be able to find a solution.

As it transpired, the solution was much closer at hand than was first suspected. It just so happened that, parked right outside the door of the Team USA garage was the Shadowfax Kawasaki!

I’d brought it down just for fun as a static display, and it certainly attracted lots of attention. But it had a Kawasaki 1000 engine with the same sort of clutch mechanism as Wade’s bike.

In less time than it takes to say “Shadowfax” the old girl was being canniballised for parts. The necessary bits were all there and it didn’t take long to transfer them from my bike to Wade’s and get him back in the show.

The bike was not fast enough to qualify for the Team USA team in the International Challenge, but Wade was able to ride the rest of the P5 races and have fun. At the end of the day on Sunday, my bits were refitted and I brought the bike home intact.

Like the title says, what goes around, comes around. The number of parallels between 1981 and 2014 are astonishing and the situation, I felt, enabled me to say my own thank you to that nameless spectator at Oran Park 33 years before. Never pass up the opportunity to do some good.