Strong results for KTM RC390 riders in Supersport 300 Round 1

KTM’s team of RC390 riders made a big splash at the weekend’s first round of the Australian Road Race Championship’s Supersport 300 class. Running as a support to the World Superbike Championship opener, the class saw some incredible racing as eighteen-year-old Max Croker left Phillip Island holding second in the over-300 ranks.

The Supersport 300 class is the second-tier of the ASBK support classes, and KTM fielded a dynamic trio of young dirt trackers including multiple national title winners Jared Brook and Billy Van Eerde, all aboard KTM’s exciting RC390 Supersport bike.

Despite Croker being the only experienced road racer, the trio came away with impressive results in the cutthroat racing which sprawled out around the track all day – Croker’s consistent 9, 10, 11 bringing him to within a single point of the championship lead.

Diminutive junior dirt track ace Billy Van Eerde had an incredible introduction to road racing, coming away sixth on the day despite being high-sided into the gravel and out of the second race. He’d earlier finished third in the opening race, and later sixth in the final. 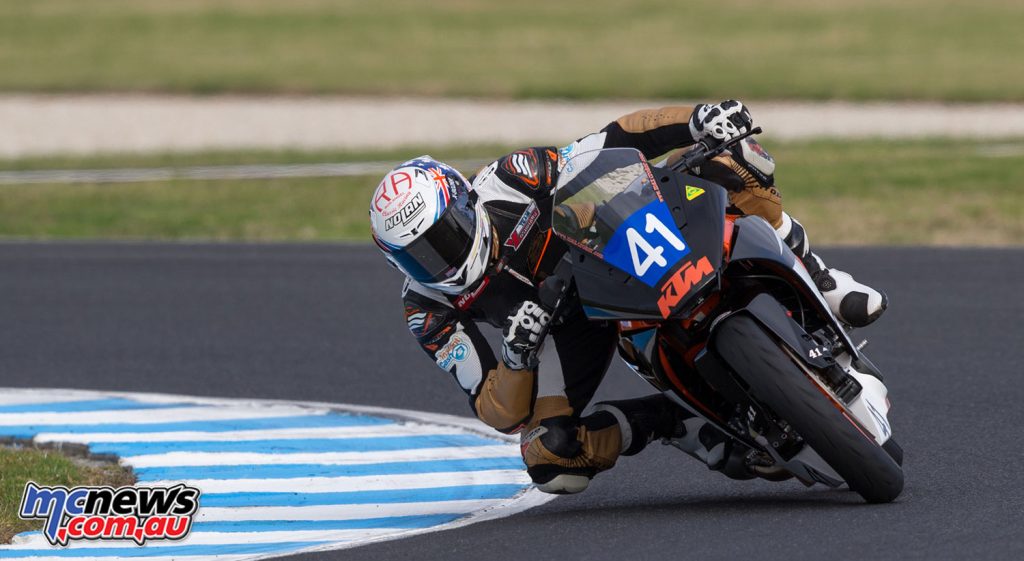 “It was great fun, and different racing compared to the 600. It was very difficult to break away and to get a good lap time you really had to have a tow. There was passing every single lap. You could be in a good position one minute, then you might drop back five positions in the one corner. And you were rubbing elbows the whole way. It was awesome! I was definitely surprised to get second. We’d had no testing on that bike, and just turned up with an exhaust for it and some suspension and that was it. I think we did really well with where we finished, and everyone knows that the KTMs are competitive. With just those few mods it was incredible the way the bike felt.” 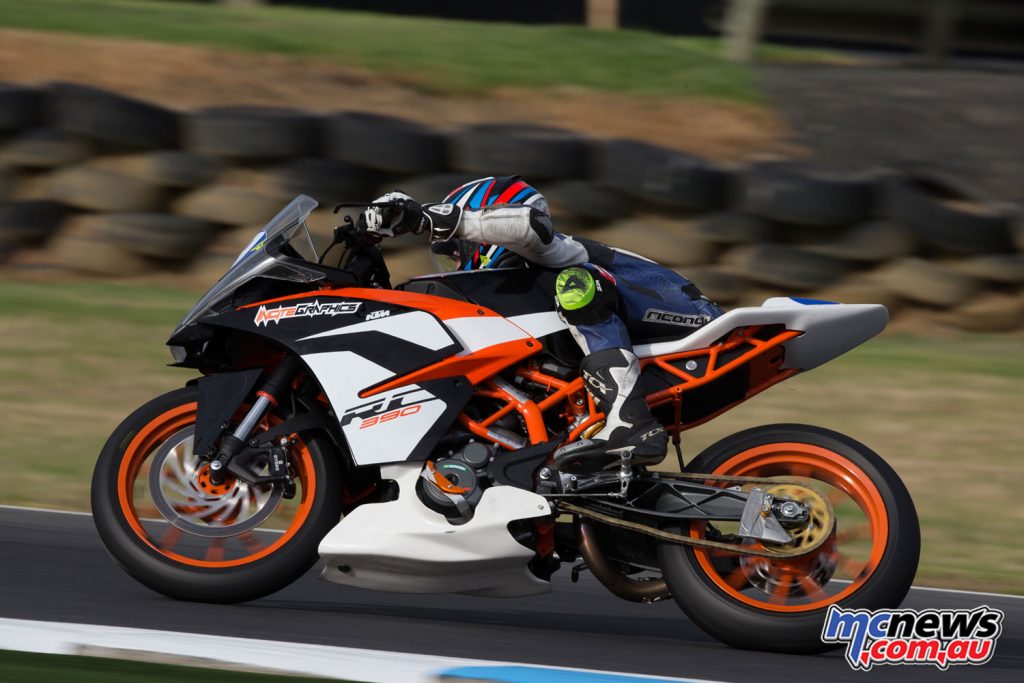 “It’s crazy racing, the battles are just so much more intense. Dirt track you might be battling one other person, but in this you’ll have like 12 at a time and can lose like five positions at once – it’s awesome! I got a pretty decent time in and in the first race I was hoping to get a top ten or something, and got into a battle with the leaders and ended up third across the line and first in the over-300s! I was so happy with that! In the second one I was on lap seven of eight and we were trying a new tyre on the back and it was just sliding everywhere. I was in an insane battle with at least ten riders and I was coming out of turn 11 – where you’re flat through to the main straight – and the back stepped out and I got thrown over the bars into the gravel. It wasn’t that fun. In race three I didn’t know if I’d have as much confidence, but I got another good start, and found myself battling for first again. I think I hit the lead two times, and then on the last lap I made a big mistake in the last corner, and my front end started tucking and I ran onto the grass. I lost like three seconds on the leaders but the finish line was just ahead anyway, so I didn’t lose any positions and ended sixth.”

Jared Brook worked diligently to adapt his throttle-heavy, rear-wheel steering technique to something more suitable for the smaller capacity and tremendous grip of the situation, and recovered from 35th place in qualifying to be 11th on the day.

Brook’s machine decided not to button-start on the startline for the first race, and he spotted the field in excess of 30 seconds while bump starting, eventually making his way back from 42nd to 35th in that race, then posting 18th and 21st across the next two.

“It was a great weekend, I didn’t qualify as high up as I would have liked, but then in the first race I had to get push-started and got 35th. We fixed the problem and in the second I rode from 31st to 18th, so I was pretty happy with that! It was such a big field, there were 42 of us, so it’s difficult to weave your way through without getting into any trouble. It wasn’t a progressive start grid, so you just started each time from where you’d qualified. In the third race I ended up 21st.  It was a lot of fun being able to have another road race again. Because it is such a fast race track and I’m not used to doing that sort of speed. My fastest speed down the straight was 194 and you have the throttle wide open for periods much longer than I’m used to, and the grip levels as well require a big trust factor with how much you can lean it over and be on the throttle mid-turn. I ride dirt track with the back end, and I’m quite aggressive on the throttle too, whereas with this you don’t want to break the back out too often. So, still learning as we go, and each time I went out we improved.”

Australian Supersport 300 Championship – Over 300cc – Round 1