by Trev
in Suzuki Reviews
Reading Time: 7 mins read
A A
0
SHARES
327
VIEWS
Share on FacebookShare on TwitterShare

After spending the best part of a week with the Suzuki flagship (a ship out of Battlestar Galactica was how one onlooker described it) I have come to respect the Hayabusa as a good all-rounder.

5.8 kilometres after hopping aboard for the test I was greeted by a copper jumping out from the bushes on a straight bit of road and hailing me in.  29 over the limit was the verdict and no amount of my begging and pleading would let me get out of it.  The straight road was an 80 kph zone with no side-street in visible range. He had clocked me at 109 kph. I tried the ‘I have just picked up the bike for a road test line’ and ‘how it had caught me unawares how fast it was going as I was thinking about how the bike felt’ lines, but all to no avail.   Bugger. 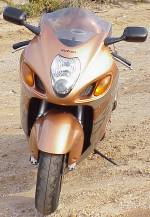 This was to set the tone for this test, the ‘busa never seems to be trying hard but then you look at the speedo and go ‘oh shit’.

The ‘busa doesn’t feel incredibly fast in the first few gears, no faster than an R1 or ZX-9R but when you hook 4th, 5th and 6th and glance at the speedo you know you are on something that has a LOT more power than either of those two bikes.  I won’t dwell on this too much as the comparative power and torque figures are up here.

The Hayabusa isn’t at all incredibly wheelie prone, much to my disappointment.  The long wheelbase and smoothness of the power

delivery rob it of the wheelie lofting character of both the R1 and ZX-9R.  The power is so smooth and constant that it just carries on it’s merry way without getting too light at all.  Drag strip launches or rolling off the throttle followed by cracking it open again will see the front rise with no problems at all but it doesn’t just pop up all over the place like the R1 and Z9. The Hayabusa is not really in the same class as those bikes.

An R1 is a focussed track tool that just keeps enough civility to be used on the road while the ZX-9R is a slightly softer but no less exciting proposition.  The Hayabusa is, in fact, a big Superbike kind of tourer.  The Hayabusa’s main opposition is the CBR1100XX Blackbird but the Honda engine is no match for the awesome stomp of the Suzuki.  I have only briefly ridden an XX but I feel that the Suzuki is the better bike for spirited riding.  The suspension is a little harder, brakes better and the Suzuki engine makes the Blackbird look positively weak.   But the Hayabusa engine makes anything look weak with more torque at 3000 rpm than either the ZX-9R or R1 make at their peaks.

The big Suzook has an extremely comfortable riding position that doesn’t hinder boy racer games too much.  The first day on the ‘busa I covered around 600 kilometres, 80 of those included very fast open sweepers, 170 kilometres was reasonably tight going while the rest was done in a country commuting kind of fashion.  I never had to stretch my legs or give my arse a rest by hanging off the seat which speaks volumes for rider comfort.  I should have had one of these when I rode from Perth to Sydney. 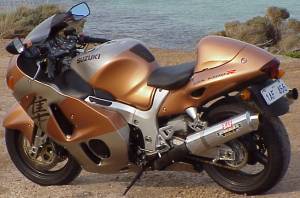 The suspension is a little firmer than I thought it would be, transferring a few bumps through to your body but no big slams. I thought it would be a wallower, it isn’t.  The front has a bit of a tendency to run wide but changes of direction are not too unsettling at all, it is even pretty easy to change direction while in the turn.   It doesn’t even take too great an effort to correct your cornering line.   Quite surprising really when you take its heavy weight (250 kilos wet) into consideration.  Don’t get me wrong, it doesn’t flop from one side to the other as easy as an R1 or ZX-9R but it isn’t as heavy to throw around as you might think.

The suspension does lack a bit of feel, but I would imagine that is due to the weight of the bike squirming its tyres about than anything else.  I was never completely confident to really push the front into the tighter bends.  Instead, I concentrated on getting everything set up smoothly before the corner, rather than rushing in while slamming down through the gears as I would have been doing on a sportier bike.

The Hayabusa is not the bike for a boy racer for precisely this reason.  There is no need to do too much shuffling up and down the box and clambering all over the bike, just wait for the road to start opening into a bit of a straight and blast past anything you feel like.  ‘Everything else is prey’ as they say on the advert.

Riders on some machinery may kid themselves for a little while when thinking about taking on the big Suzuki but when you start getting into 4th, 5th and 6th gears the Hayabusa will leave all the opposition for dead.  It has yet to be seen if the coming ZX-12R will be able to beat it.   Kawasaki have always been the master of ram-air though which would make it a pretty sure bet that the ZX-12R will be slightly faster.  But I think that there will only be a whisker in it.

The brakes are very good.  The front has good bite and doesn’t suffer from too much fade, the front tyre gets buried into the ground and squirms away while the whole show remains fairly composed.  The rear brake is excellent, a necessity on a bike of this mass.

The fuel tank holds 22 litres and has an accurate gauge mounted on the dash.  A warning light comes on when there is around 4 litres left. 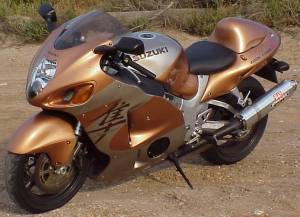 Some spirited riding sees a tank drained in around 200 kilometres.   Normal riding would see nearly 300 kilometres to a tank.

Quality of finish is excellent, the best I have seen on a Japanese bike.  The only slightly tacky thing is the fake carbon fibre that surrounds the dash.  Everything else seems well built and strong.

Servicing costs should be no more than any other four cylinder road bike but keeping it in tyres will be a major problem.  If this is going to be your everyday transport I would recommend that you include in your budget around $100 a week to keep the ‘busa in tyres.  I wouldn’t think that you would get any more than 2000 kilometres out of a rear.

The styling – well here is the greatest bone of contention.  While It has grown on me, the Hayabusa is not what I would call an attractive bike.  But during the test quite a few people mentioned how good looking it was.  The lady at my local servo’ remarked how much better looking it was than “that Italian thing you had last week” (the Aprilia RSV 1000 Mille) which frankly had me gasping for air at such a shocking statement.   Beauty is in the eye of the beholder it seems.