by Admin2
in Formula Xtreme, Motorcycle News, Motorcycle Racing
A A
Share on FacebookShare on TwitterShare 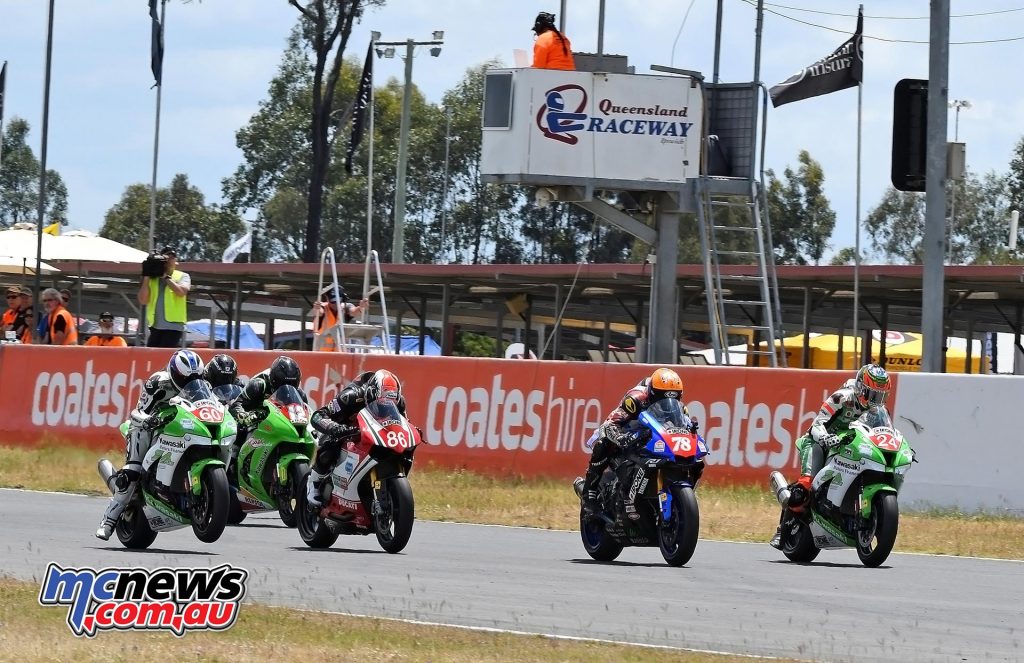 The opening Superbike race got away pretty much on time this morning and it was Michael Blair who was hottest out of the blocks.

Robbie Bugden eventually chased him down though and took the race lead on lap six. 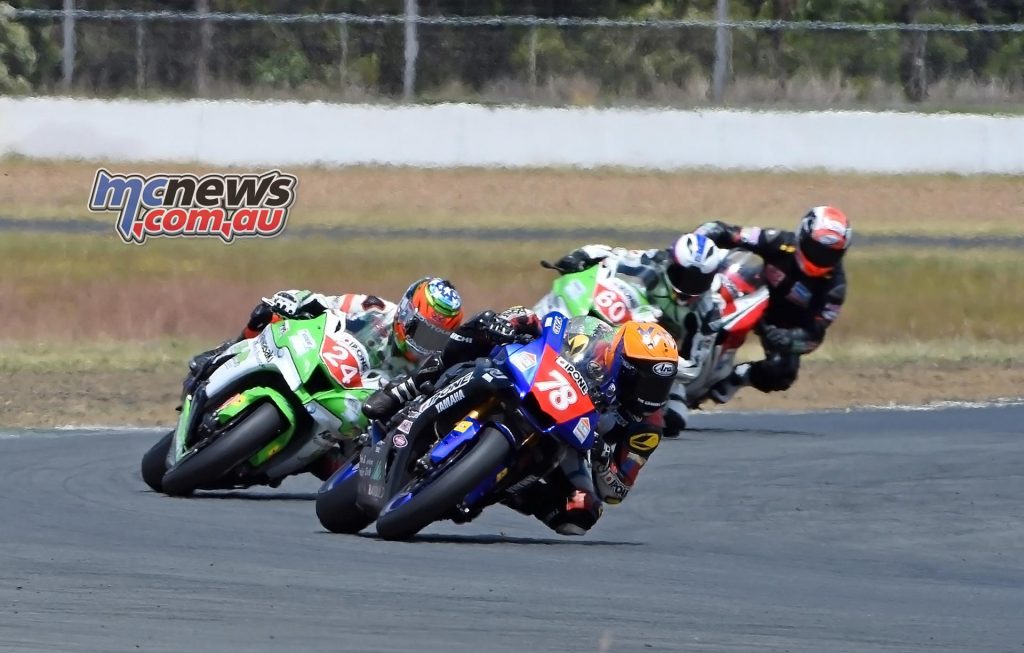 Blair stayed with Bugden over the final laps but couldn’t quite muster the speed to mount a challenge to steal the win back from Bugden, the Kawasaki man eventually taking the flag two-tenths of a second ahead of Blair. 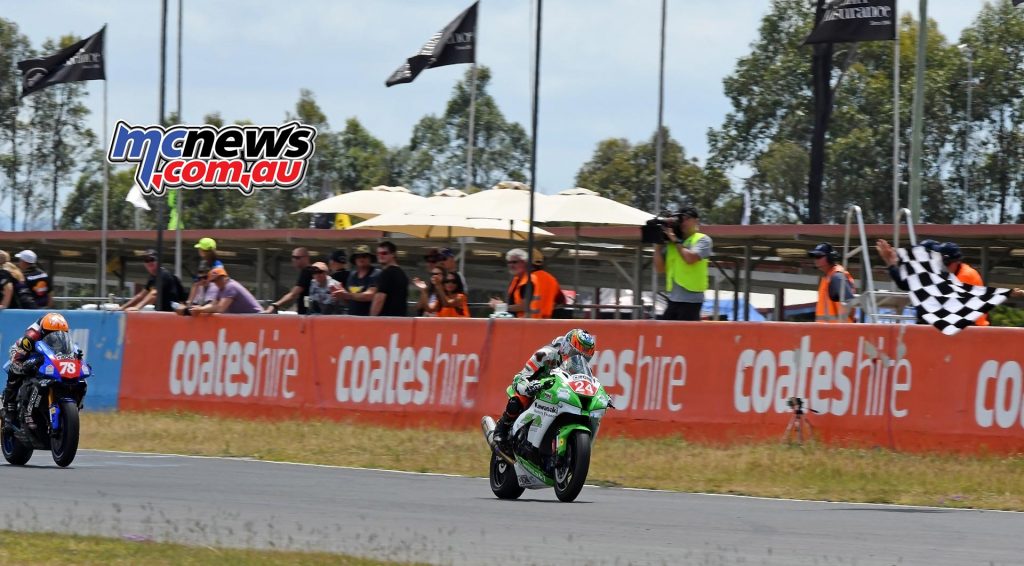 The second Superbike bout saw riders go three-wide at turn three, but it was Bugden that pulled out of that turn best, to hold an advantage into the double left-hander. Beau Beaton got very deep into the final double-right on the opening lap but managed to gather it up. Michael Blair and Ben Burke were not so lucky, both competitors ending up in the sand trap.

Blair was committed to an inside pass when Burke turned in to make the corner thus Blair hit Burke from behind and sent him high into the air.

Blair managed to rejoin the race at the back of the field, but Burke had come down pretty hard and was unable to remount the BCperformance ZX-10R. He was left to watch the rest of the race unfold, sweating it out from the sidelines and assessing his possible injuries. Later in the afternoon it was confirmed that Burke had suffered a fractured wrist in the incident.

Both Bugden and Beaton were in to the 1m10.7s and battling for the lead with six laps to run, and that pair had a significant advantage over third placed Matt Walters, who had the Ducati of Craig McMartin trying to hunt him down and challenge for that final step on the rostrum. 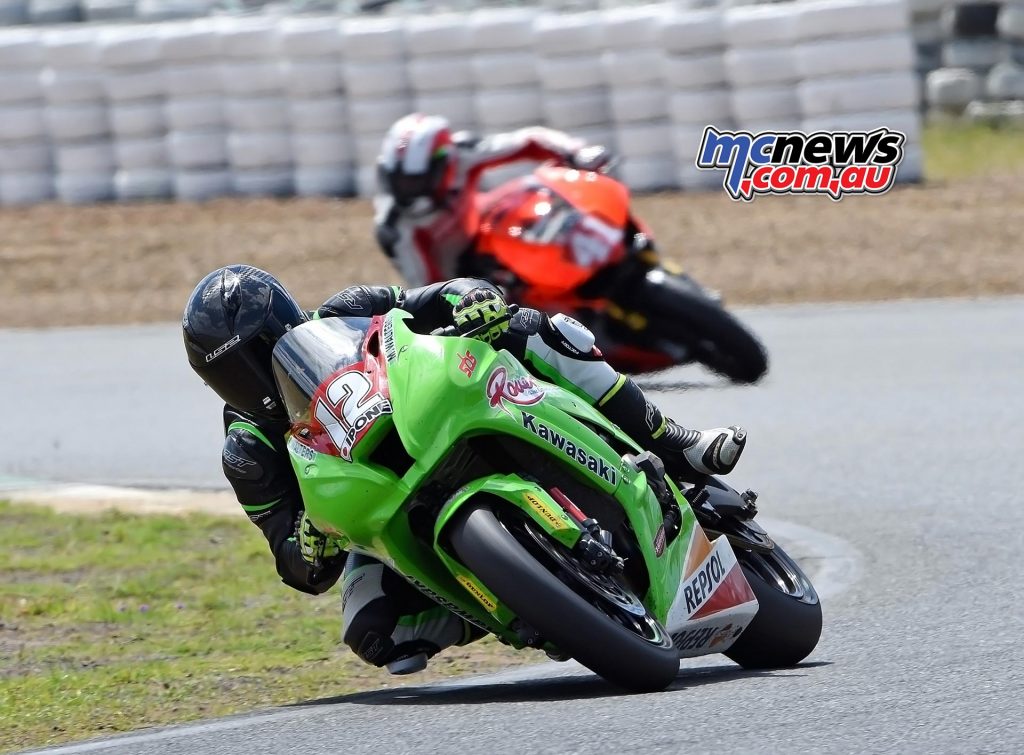 Bugden upped his pace further as the race approached the halfway point, to start to eke an advantage out over Beaton.  The gap stretched out to just over a second, Bugden then backed off a little and Beaton again got a sniff of possible victory, but Bugden managed the gap to the chequered flag and eventually a clear victory by nearly three-seconds over Beaton.

Behind that duo a good battle had been waging over third place, Walters and McMartin the protagonists. McMartin did his best to get on terms with the Kawasaki man and make it two Ducatis on the podium but could not quite breach the gap, Walters eventually taking that third place with a handy 1.7-seconds over McMartin.

Robbie Bugden got an almost perfect start on the BCperformance ZX-10R as the final nine-lap race got underway at Queensland Raceway today at 1545. Michael Blair had his work cut out for him to come from the back of the grid but was up to fifth place by the end of lap one.  Bugden’s primary pursuer early on was Beau Beaton while Matt Walters and Craig McMartin struggled to try and maintain some sort of touch with race leader Bugden. 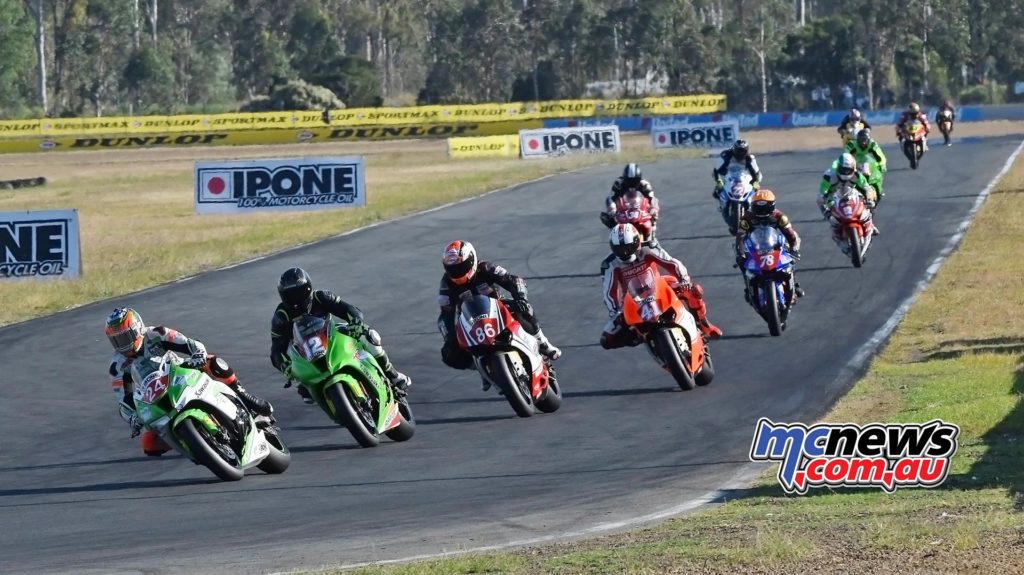 Bugden put in a 10.9 on his first flying lap, backed up with a 10.8 then another 10.9 but Beaton was looking doggedly determined not to let Bugden escape. The gap between the pair was a full-second with five laps to go but should Bugden make any mistake Beaton was ready to pounce.

The battle for third place was hotting up with Walters coming under attack from McMartin and Blair.  Blair moved up to take that third place with two laps to run and immediately started to pull away from that tussle and close on Beaton to set up a late challenge for second place. At the last lap board Blair was only two-tenths behind Beaton after putting in the fastest lap of the race and the battelines had been drawn.

Blair took Beaton for second place early on the final lap only for Beaton to get past him under brakes around the back of the circuit, the Ducati man managing to hold Blair off to the line to claim second place. 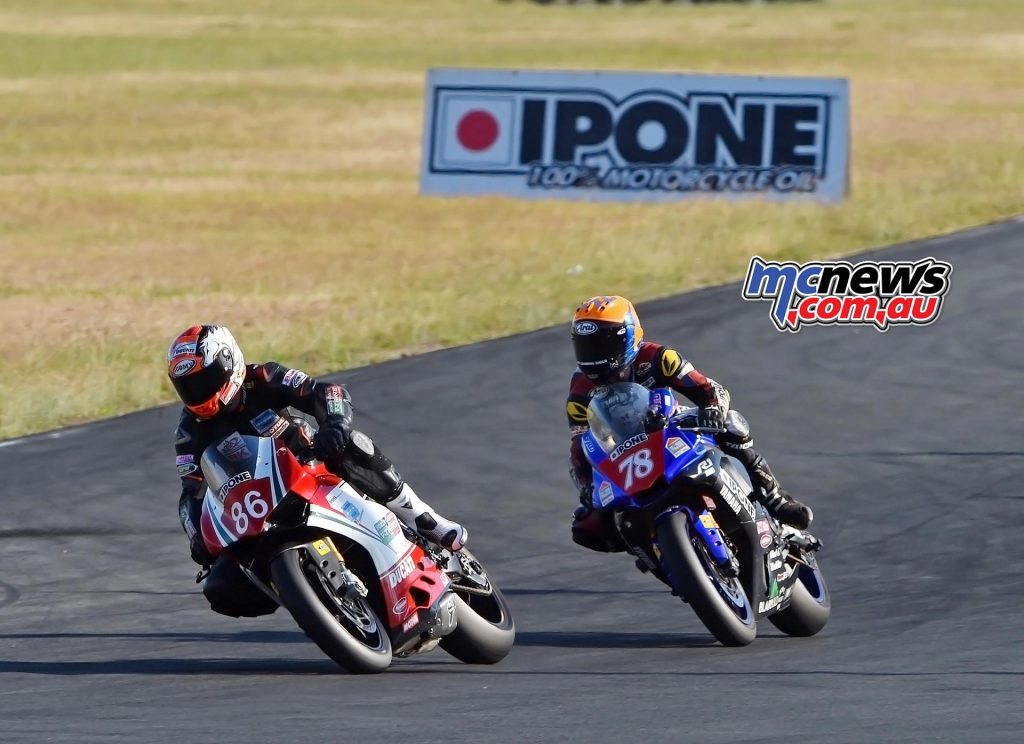 Bugden rounded out the day with another display of dominance. 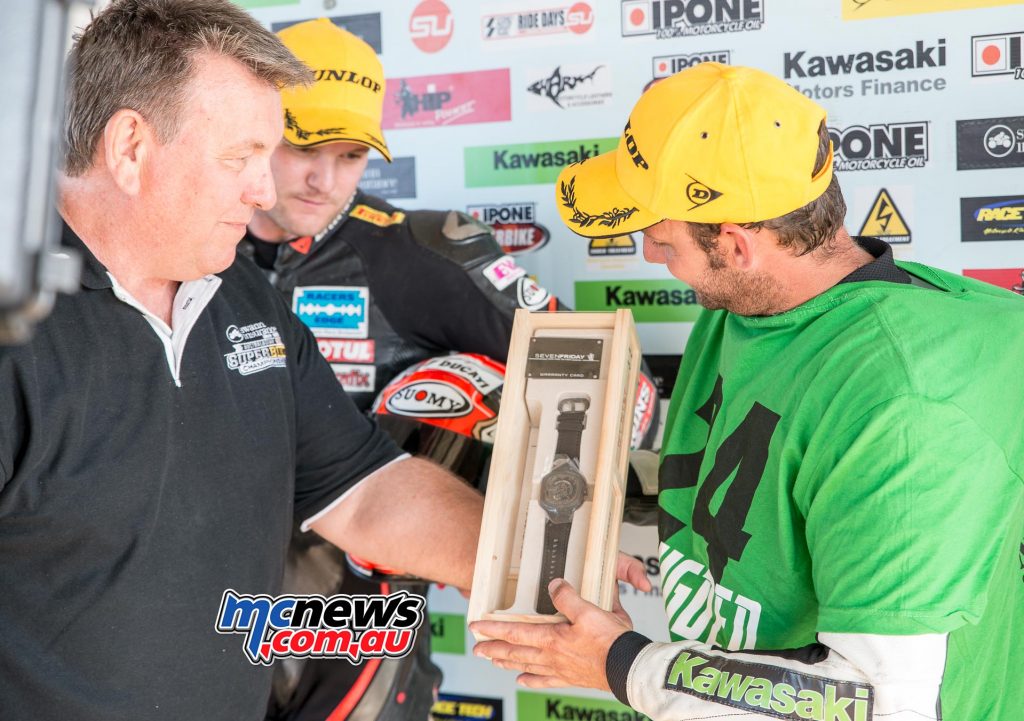 Lap times today were far from lap record pace but it must be noted that riders are on a control tyre designed to be durable and flexible enough to be used at different circuits, and that track temperatures were approaching 50-degrees celsius. They were certainly riding hard enough.

Matt Walters put in some good rides today but was not quite there to really challenge for outright pace at the front of the field. Corner entry a bit of a bugbear for the Cessnock Kawasaki man.

Craig McMartin showed great speed but got caught up in a few incidents thus his fifth for the round probably not that indicative of his potential standing.

Liam Wilkinson kept it upright and remained consistent enough to clinch sixth for the round ahead of Brad Swallow, who was certainly exciting to watch!

Paul Byrne was plagued with electrical gremlins and thus it will be a long drive home for the LTR squad after a disappointing weekend.

Brendan McIntyre had his ups and downs but bagged ninth for the round but Dominic De Leon was celebrating heavily after his tenth overall.  The Trinidad born Sydneysider had his most successful weekend ever to win his grade but the icing on the cake was his victory in the Stars of Tomorrow event, for which he got to take home a nice new Cannondale Mountain Bike worth nearly $3000 thanks to CycleSports Thornleigh, a bicycle shop in Sydney owned by ex Superbike competitor Graeme Wilshaw.

With double points across three races set down for the twilight Sydney Motorsport finale on Saturday, December 17th, there are 150 points still up for grabs so the title is far from settled.

There might also be a few wildcard entries at the final round that might shake things up at the front of the pack.

Callum Spriggs could step up to contest the Superbike category at the finale on Ben Henry’s earlier model ZX-10R. It is an option currently being discussed between the two.

With Ben Burke slated for likely wrist surgery, it is unlikely he will be able to hang on to his BCperformance ZX-10R at the final round. If a suitable replacement is not found team boss Kelvin Reilly might even dust off his leathers. 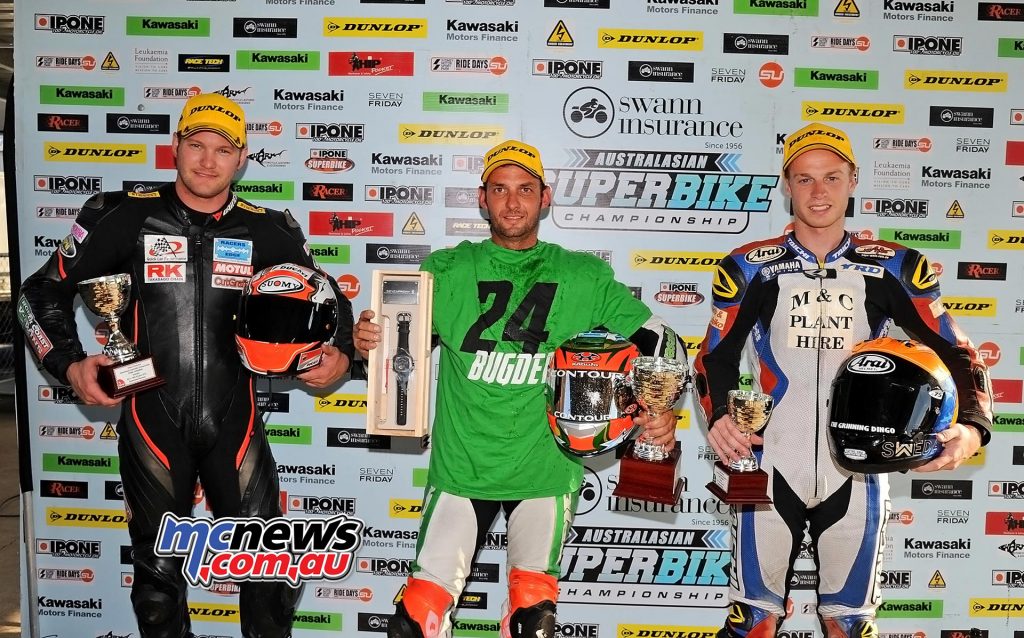