Monster Energy AMA Supercross, an FIM World Championship, will return to Anaheim, Calif., and Angel Stadium for the third and final time in 2014 this coming weekend with many developing story lines in both classes of racing. The fifth race of the season serves as an opportunity for Monster Energy Kawasaki’s Ryan Villopoto to gain an edge on his 450SX Class rivals just one week after capturing his second win of the season and reclaiming possession of the championship lead. In the Western Regional 250SX Class Championship, Rockstar Energy Racing’s Jason Anderson seeks his fourth victory of the year.

Last weekend from Oakland, Calif., and the O.co Coliseum, Villopoto put forth the most dominant effort of the 2014 season, leading all 20 laps of the Main Event to secure his second victory in three races and become the first repeat winner in the early stages of the championship. Team Yoshimura Suzuki’s James Stewart and Discount Tire Racing/TwoTwo Motorsports’ Chad Reed rounded out the podium.

“It feels good to be up here tonight,” said Villopoto from the podium. “We have put in a lot of work at the test track, and I have a great team behind me and a great bike under me. I hope I can carry this momentum into Anaheim next weekend.”

With four races completed and Villopoto earning the distinction of being the first two-time winner of the 2014 season, the storylines in the 450SX Class continue to unfold heading into Anaheim. Some key takeaways in referencing the 40-year history of Monster Energy Supercross suggest Villopoto is in an enviable position, while the parity heavy competition is sure to result in compelling racing:

In addition to three winners in the first four races in 2014, the 450SX Class Heat Races have had six different winners in eight races, and six different riders have finished on the podium in four Main Events. Additionally, the 450SX Class Semis have had seven different winners in eight races while the LCQ’s have boasted a different winner each week. All this parity has provided some of the most competitive and captivating racing in the 40-year history of Monster Energy Supercross and is an indication of the difficult task that lies ahead of Villopoto as he seeks his fourth-straight world title.

For the third time this season, Anderson won a Western Regional 250SX Class Main Event by making a last-lap pass. Anderson captured the first two races of the 2014 season by surging by Troy Lee Designs/Lucas Oil Honda’s Cole Seely on the final lap of competition over consecutive weeks and did so again last Saturday when he moved past Monster Energy/Pro Circuit/Kawasaki’s Dean Wilson following a brief loss of power with Wilson’s motorcycle. Anderson reclaimed the points lead with the victory to rebound from a penalty that cost him four points the week prior and give him four wins in his past six Main Events, dating back to last season.

“I can’t believe I keep pulling these off; three wins in four races is huge,” said Anderson. “I hope to come away with the number-one plate at the end of the season. I wanted to be in attack mode tonight, but I also wanted to keep it on two wheels.” 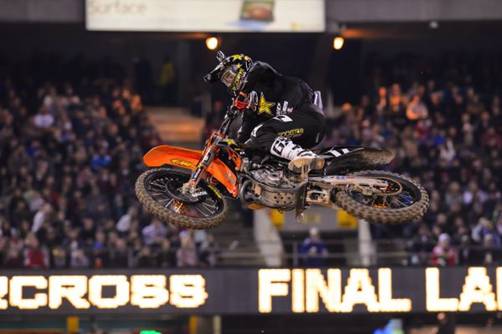 Wilson recovered to finish second and claim his first podium finish of the season, while his Monster Energy/Pro Circuit/Kawasaki teammate Justin Hill secured his first career podium result in third.

Just two weeks after it hosted the 40th Anniversary of Monster Energy Supercross, Angel Stadium will host its 63rd race in the 450SX Class and its 54th Western Regional 250SX Class race.

The first race held in Anaheim was on December 4, 1976, and Mart Smith won on a Honda. This weekend will mark the 62nd time the gate will drop for a 450SX Class race in Anaheim and the 24th time the city has played host to the season opener. James Stewart, Ricky Carmichael and Jeremy McGrath are tied on the all-time 450SX Class win list at Anaheim with eight victories. Ivan Tedesco holds the 250SX Class all-time win record in Anaheim with five victories. Angel Stadium is the only stop on the tour that will host three races – January 4, January 18 and February 1.

The first two races in Anaheim during the 2014 season produced two different winners. Red Bull KTM’s Ken Roczen captured his first career victory at the season-opening race on January 4, while Reed raced to his 42nd career win at the second race on January 18, ending a near two-year winless streak.

Past Winners in Anaheim