Peter Hickman and the Smiths Racing BMW team enjoyed an excellent Ulster Grand Prix meeting Peter Hickman on Saturday with wins taken in the Superbike and Supersport races as well as a close second place in the Superstock encounter, results which earned the Louth-based rider the Man of the Meeting trophy.

After taking a steady fifth place in a damp Supersport race on Thursday evening, when the first Superbike race was cancelled due to fading light, the Superstock race got proceedings underway on a sunny morning today where, starting from second on the grid on the Smiths Racing BMW, a good start saw Hickman take the lead on the opening lap from Dean Harrison.

There was little to choose between the two riders as they both broke the Superstock old class lap record and although Harrison took the lead on lap three, Hickman was content to sit in his slipstream before he made his move in the closing stages. This he duly did as he took the lead at the beginning of lap five, but the race was stopped shortly afterwards and with the result being taken at the end of four laps, Peter had to settle for second in the Superstock contest with Dean Harrison declared the winner.

The opening Supersport race immediately followed and Hickman moved into the lead half way round the first lap which he was never to relinquish with a dominant performance. Increasing his lead on each of the six laps on the Trooper Beer Triumph, his fastest lap of 128.838mph was just 0.2 seconds outside the lap record and he dominated the race, eventually winning by a commanding 7.9 seconds.

With the forecasted poor weather closing in, the feature seven-lap Superbike race was then brought forward on the schedule and Peter completed the first lap in second place, just half a second behind Conor Cummins as just over a second covered the leading quartet. Second time around Peter took the lead and was 1.3 seconds clear as he headed into lap three.

By this time, spots of rain had begun to fall, and the race was soon stopped on safety grounds with the result ultimately declared at the end of the second lap which saw Peter awarded his fifth Ulster Grand Prix victory, his winning margin over Lee Johnston 1.399 seconds while South Australia’s David Johnson took third on the Tyco BMW. 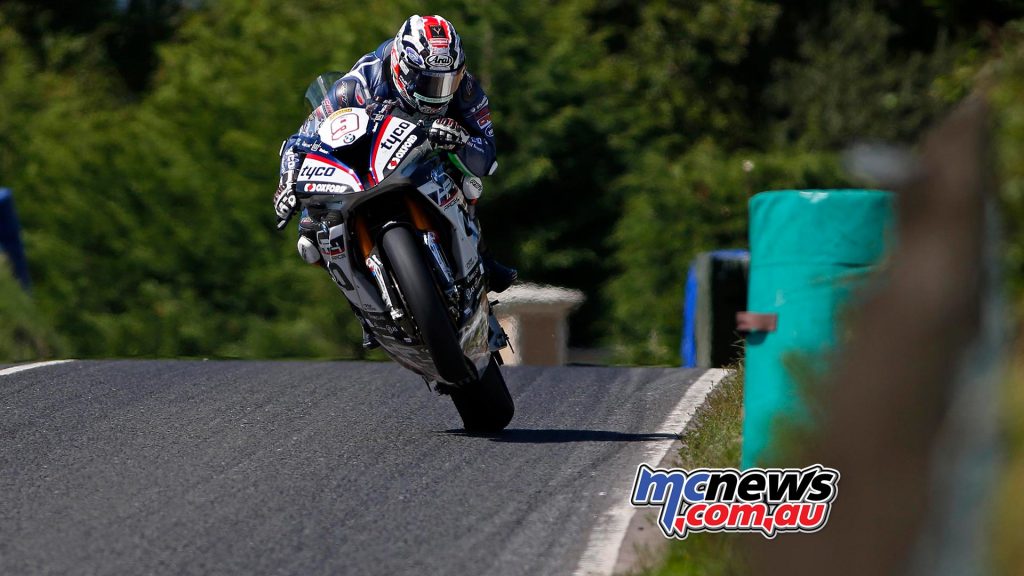 Unfortunately, the weather then worsened, and organisers had little option other than to cancel the remaining three races, two of which – the second Superbike and Supersport races – Peter had been due to contest.

In what ended up being the final racing of the day, the Plant Lubrication (NI) Ultralightweight / Lightweight race, Shaun Anderson took the spoils in the Lightweight class, while Michal Dokupil went one better than his result on Thursday when he took his first ever international win in the Ultra-lightweights.

With two wins, a second and a fifth, Peter duly picked up the Man of the Meeting trophy for the second year running whilst he also ended the domestic International road racing season with at least one victory at each of the North West 200, Isle of Man TT and Ulster Grand Prix.

“It’s been a bit of a stop-start meeting with the weather conditions making it difficult for everyone and we ended up losing three of our scheduled races but to come away with two wins and a second today has been very pleasing. It could have been three wins as I felt really comfortable in the Superstock race and was just biding my time behind Dean before making my move on lap five. As soon as I got by, I opened up a lead but with the red flag coming out and the result going back a lap, I had to settle for second. It’s swings and roundabouts though as good fortune smiled on me in the Superbike race, being awarded the win after just two laps which felt a bit weird to be honest. There were no such issues in the Supersport race and I just got my head down from the start. It’s difficult to make a break around here but I managed to do that, and the little Smiths-prepared Triumph was flying. It’s such a shame the rain brought an end to the day but I’m happy for myself and for the team that we got the results we did whilst it’s also nice to win races at each of the International road races.”

Dundrod & District Motorcycle Club confirms that while Fabrice Miguet remains on life support, we understand that the medical expectation is that he has sustained injuries that are un-survivable.The 49-year-old rider from Normandy, France, was taken to the Royal Victoria Hospital following an incident at the Joey’s Windmill section of the course during the Superstock race at the Ulster Grand Prix on Saturday 11 th August.