Take a large selection of genuine and after market parts, then simply throw them at your bike.
Sounds daft perhaps, but it is the approach many take when it comes to customising their Harley. This hap-hazard approach often leads to bikes which, although brimming with quality parts, have no real visual appeal. 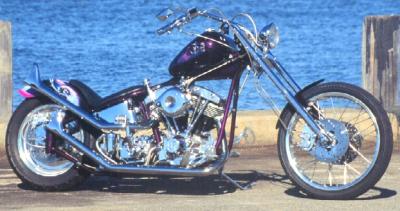 Dino Retta in Western Australia on the other hand, understands the thought and methodical approach that is the ‘art’ of customising a Harley.

hog1.jpg (21514 bytes)After using his skills to create a hot springer, Dino’s now come up with a plunger framed, shovel engined masterpiece that can only be described as visual poetry.
The whole thing began with a chopper carrying an ’82 Shovel motor that was brought into Australia direct from California by another West Aussie, Alf Viccario.

To cut a long story short, Alf stripped the bike, ultimately separating the engine and frame which have never been together since. The machine Alf built with the engine from his US import is a beauty itself, but the frame made its way to Dino – after Alf had spent eighteen months sandblasting, grinding back and re-moulding the mess some American had made of raking and stretching it.

No-body is quite sure exactly what make the frame is, although general opinion seems to lie in favour of Santee.

Once in Dino’s hands though, the chassis sat around for another eighteen months before a plan was hatched and the absolute masterpiece you see here begun.

With another early 80s replacement Shovel motor sourced, things began to get serious and bit by bit she went together.
41mm Arlen Ness forks appeared up front, suspended from Ness triple clamps. The pointy end sees a 21″ Akront rim carrying twin Riviera discs which are operated on by the obligatory P & M four spotters.

The discs, incidentally, are mounted on custom disc mounts, hand crafted from billet aluminium by a bloke known simply as Domo.
Domo also made the custom front and rear axles for the bike, manufactured from high tensile steel because nothing else on the market had the quality of finish that Dino wanted ! 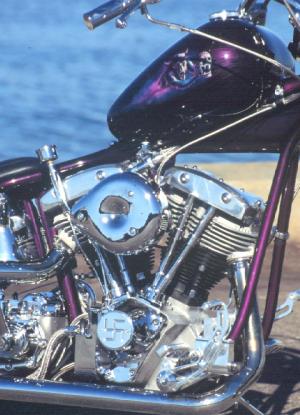 Domo’s input to this machine even extends to custom fabricating all the brackets, as well as the seat base.

Under the seat resides a solid, 16″ Centreline rim, along with another Riviera disc and P & M four spotter.

hog2.jpg (28148 bytes)When it came to the heart of the matter, that 1340cc Shovel motor, Dino was more interested in building a cruiser rather than a tyre melter.
“It’s not really meant to be a hottie. Instead I just wanted to show people what a real chopper looks like.”

Another master craftsmen, Leo, took charge of the engine ‘re-fresh’, although a fair few mods did take place. The heads were cleaned up, with the exhaust port receiving a mild port and

polish and the inlet side being de-burred and swirl finished.

Elsewhere, and after balancing the standard crank and rods, 20 thou’ over Wiseco pistons went in, while an S&S oil pump was added for good measure. Getting the fuel mixture in and out of the engine is handled by a few components that Dino simply had lying around.

The carbie is a Bendix who knows where from, while the fishtail pipes have an equally unknown past. Not surprisingly, the pipes required a bit of cutting and modification to fit the frame, with a few angles being changed and lifting a key feature to prevent them grounding on the road.

On the transmission front, the gearbox is a Revtech four speed unit, completely fitted with Andrews cogs including l-o-n-g first and second gears. Those who’ve ridden the bike rave about the gearbox and reckon it suits the engine (said to be very torquey) perfectly.

Interestingly, Brownie from Bullet Racing in Perth was called in to help align the motor and gearbox in the frame (It’s also believed that some of Brownie’s magic coatings may reside on the engine interior too).
As can be seen in the photos, the gearbox also includes a ratchet kick start and a 3″ open primary drive. The clutch is a Barnett Kevlar affair.

Of course, a bike like this is all about looks and cosmetic appeal in addition to go fast gear.

Only thing is, the list of chromed, polished and custom parts is such that it’s hard to know where to begin.

hog4.jpg (7344 bytes)Undoubtedly though, that paint scheme sets the whole bike apart, the aforementioned Alf Viccario laying down the custom Pearl Purple from his Blue Line Panel & Paint panel beating business, while in amongst it all Mick Wright has proved once again that he is Australia’s premier mural master.
As far as Dino is concerned, the bike has proven a point and creates more attention than a topless Pamela Anderson (if anybody in Perth is ever likely to see such a spectacle of course!).

Somewhere down the track, an Evo motor might replace that Shovel donk and if it does, there’s a fair chance Dino will give it the performance treatment.