by Motorcycle News
in MotoGP, Yamaha News
A A
Share on FacebookShare on TwitterShare

Three-time 500cc Grand Prix champion Wayne Rainey was reunited with his 1992 championship-winning YZR500 in an emotional display at this year’s Goodwood Festival of Speed. 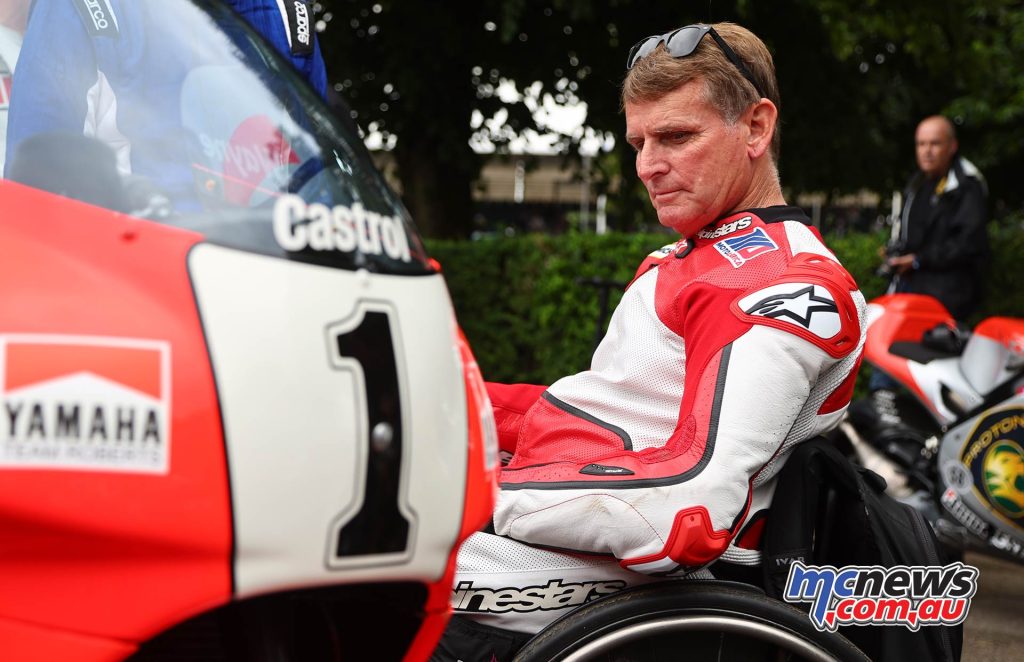 The event marked the first time Rainey, who was paralysed from the chest down in an accident at the 1993 Italian Grand Prix, had ridden a race bike since his career-ending crash.

Rainey had ridden before at a couple of special events a specially adapted YZF-R1, but this was his first time back on the two-stroke 500 since his career ending crash at Misano.

The 2022 Goodwood Festival of Speed saw one of Yamaha’s most iconic champions return to the saddle of one of the most legendary Yamaha race machines as Wayne Rainey rode up the famous hill climb aboard a specially modified version of his 1992 championship-winning YZR500.

Modifications included a special seat and bicycle style clip-in cleats to keep his feet on the pegs.

It was the first time Rainey, who won the 500cc Grand Prix World Championship for Yamaha three-times back-to-back between 1990 and 1992, has appeared at the legendary Goodwood Festival of Speed – a celebration of everything motorsport held on the picturesque Goodwood Estate near Chichester, England – and the Californian did it in style, marking his first time riding a race-specification motorcycle in almost 30 years.

The 1992 YZR500 was specially adapted by Yamaha Motor Company engineers in Japan, who modified the gear shift system so Rainey could change up and down the gears by controls on the left handlebar.

After a private test session earlier in the week, Rainey rode up the hill for the first time to rapturous applause on Thursday alongside his compatriot, fellow Yamaha champion and his Marlboro Yamaha Team Roberts boss Kenny Roberts Snr, as well as former 500cc rivals Kevin Schwantz and Mick Doohan. Rainey completed another two runs on Friday, and will do the same on Saturday and Sunday in front of Goodwood’s bustling crowd.

“I was quite nervous about riding the YZR500, as when I rode the R1 it was all quite straight-forward as the bikes these days have so much electronics on them but it’s a bit different with a 500cc Grand Prix bike!

“But, to be honest, it felt like an old friend. It was always a challenge to race the bike at that level, fighting for race wins and championships, but being here 30 years later, being able to get on the bike and ride it up the hill in a nice, easy gentle setting is fantastic. The bike was there for me back then and it’s there for me today, so I’m thrilled.

“I didn’t know what to expect, I couldn’t really go there as I had no idea what it would feel like but when I put my helmet on and they started the bike, I was like ‘it’s on’.

“Being able to ride up the hill and through the corners, looking down and seeing that I was on my Grand Prix bike again after all those years felt like I was in a completely different world, and to do it alongside those guys, Kenny, Kevin and Mick, I could not have asked more than sharing this experience with them. A huge thank you to the Duke of Richmond for having me and to Yamaha for taking the bike out of the museum and adapting it for me to ride.”