In the MX2 Championship at Shepparton, it was DPH Motorsport’s Wilson Todd who stole the show, despite stiff competition from Egan Mastin and Mitchell Evans, holding onto his championship lead in doing so.

There were thrills and spills to say the least across both races for the 250cc class today, Todd being served up with tough competition, from not only his opponents but the track itself.

The Motul MX2 class were the first category to brave the icy conditions this morning, heading out for their practice and qualifying session at a fresh 8:00am. It was the KTM two-stroke rider Egan Mastin who was the man to set the pace, qualifying with the fastest lap time, a 1:32.564, ahead of DPH Motorsport’s Todd (1:32.705) and Serco Yamaha’s Mitchell Evans who wrapped up the session less than a second off the pace with a 1:33.208 lap time.

With red plate holder Todd entering the seventh round with a slim five-point lead over Serco Yamaha’s Evans, when the Motul MX2 class lined up for their first moto of the day, spectators knew that race one was set to be one epic battle.

When gates dropped on the first 30-minute moto, it was fastest qualifier Mastin who shot through the first turn to collect the Raceline holeshot followed by the Evans brothers Mitch and Richie, and from there the top three checked out.

Behind the front trio, Penrite CRF Honda Racing Team’s Webster led the battle for fourth, followed by Jackson Richardson and Raceline Pirelli KTM’s Jay Wilson. Surprisingly, after three rotations on the Shepparton circuit, DPH Motorsport red plate holder Todd was back in eighth position and with a fight on his hands if he wanted to retain the championship lead.

By the six lap mark, Mastin came under fire from Serco Yamaha’s Evans, and all it took was a small mistake from the KTM rider, and Evans snatched up the race lead.

Another rider who found his form by the halfway mark in moto one was Webster. The Honda rider made the pass on Richie Evans for third position, where he then began to eye off Mastin in second.

By the 15-minute mark in race one, the track was getting deeper and more technical by the second, forcing the Motul MX2 class to adapt quickly to the changing track conditions – but one rider who looked more determined than anyone else in the field was Todd. Despite starting well outside the top ten, the red plate holder made his way through the talented field and into fifth position, with a third of the moto remaining.

With just under ten minutes left in moto one, the running order saw Evans maintaining the race lead from Mastin and Webster in second and third. Todd had made his way up to fourth, followed by Richardson, Richie Evans, Hamish Harwood and Wilson.

As moto one reached it’s closing stages, a three-way battle for third quickly developed with Mastin coming under fire from Webster and Todd, and within only a few turns, Webster and Todd made the move on the KTM rider – the pair then moving into second and third positions. Then, with only laps remaining, Todd made the pass on Webster and moved into second position, ensuring the the championship lead did not slip through his fingers.

But irrespective of Todd’s charge through the pack, it was Serco Yamaha’s Evans who confidently collected the opening moto victory from Todd, and Webster. Mastin slipped back to fourth by the time the chequered flag flew, while Raceline Pirelli KTM’s Rykers charged through the field to finish in fifth. Evans (Richie), Dylan Wills, Harwood, Richardson and Ricky Latimer completed the top ten in race one.

With the championship gap reducing to two points after the opening moto, in race two for the Motul MX2 class in was on like never before this season. When gates dropped it was Mastin who took his second holshot for the day, ahead of Husqvarna mounted Wills and red plate holder Todd.

With only 20 minutes on the clock in the second moto for the MX2 category, riders were forced to sprint in order to maximise their positions. One rider who made sure he used the opening laps to move into a healthy track position was Todd – after only three laps the DPH Motorsport rider moved into second position where he began to apply pressure on Mastin.

Behind the top two, Richardson slotted in to third place ahead of Richie Evans, Wills, Mitchell Evans and Wilson – the top eight separated by only seconds.

After four laps on track Mastin began to come under fire from Todd, while Todd also began to feel the pressure from a hard charging Serco Yamaha mounted Richardson, setting up the second half of race two as a dash to the finish line. Unfortunately for Mastin, a small mistake allowed both Todd and Richardson to pass the KTM rider, Todd taking on the race lead, while Richardson slotted in to second.

Incredibly, over only a few laps Evans had moved through the field and up to Mastin’s rear wheel, but just as he had made the pass for third, Evans went down in a slippery section of the track, forced to remount his machine and start from scratch once again.

With both Todd and Richardson pulling a healthy gap on the field, the attention soon shifted to the battle from third through to ninth, Richie Evans, Webster, Rykers, Mitchell Evans, Wills and Harwood all within striking distance of each other.

Unfortunately for Richardson, his hope of a podium was dashed by the eight lap mark. The Serco Yamaha rider went down hard in the roller section of the track, and was forced to leave the circuit clutching his shoulder in the care of Racesafe.

The drama didn’t stop there. Only a single lap later, race leader Todd went down and handed the lead back to Mastin – Todd dropping back to second at a crucial moment in the moto.

With a minute and a half remaining before riders received the last lap board, Mastin continued to lead from Todd, and Rykers who had capitalised on the mistakes of others finding himself in third.

And when the chequered flag flew for the final time today it was Mastin who collected the final race win, second went to DPH Motorsport’s Todd, while thanks to a last lap pass Webster finished in third.

With the points tallied from both motos at Shepparton it was 2,2 results that saw Todd retain the MX2 championship lead and collect the Round 7 honours by a single point. Second place on the podium went to Mastin, while despite the final moto of the day being somewhat of a challenge, Serco Yamaha’s Evans wrapped up today’s event in third.

“Today wasn’t too bad, but it wasn’t the best either. In moto one I made it hard for myself, and then in race two I got out and had the lead and threw it away. I need to minimise the mistakes especially when I’m in the lead, but all in all it was a relatively good day. I’m planning on continuing with the same program from here on out – hopefully we can just try and stretch out that points lead a bit so that we can head into Coolum comfortable. That’s the goal.”

“I felt I was riding well today and I like the Shepparton track. The first race went perfectly to plan and it was a great way to start the day. Moto two was a bit more of a fight as I locked bars with a few guys off the start and was spat out the back pretty quick. I made my way through but as I was trying to pass into third, I got on the gas too early leaving a turn and the back just come around on me. I tried to be a little too aggressive and it didn’t pay off but I’m still happy with how I’m riding at the moment. Just three rounds to go now and the points are still close in the championship so there is lots of work to do. Port Macquarie is next and most of us haven’t been there before so we look forward to racing somewhere new.”

“Overall it was a good day, although it didn’t start off that well when I snapped a gear lever on the first lap of Qualifying… But other than that, the two races actually went really well and even though the track was really rutted and technical, I got a good flow going in both motos and just got into a good rhythm and was pretty happy to finish third each time out. It was a bit of a bummer that two third placings only got me fourth overall for the round, because the points were so tight between us, but that’s just the way it works out sometimes when the scores are tallied. Nevertheless, it was a great round for me, and my Penrite CRF Honda Racing CRF250R was running strong the whole time, so I have to pay thanks to my mechanic, Mick, and all the team for all their support.”

“Shepparton was a good round in many ways for me. In qualifying we seemed to have a little more speed than usual and that placed us in fifth which gave us a decent gate pick. In moto one my drive off the gate was great, but with the concrete I didn’t judge the grip on the dirt too great, I came from outside top 20 and fought all the way back up into the top five. In moto two, I started just inside the top ten and I worked my way into eighth then to third in a few laps. I actually started to catch the front two riders and I really didn’t even know there were leading until after the race finished. I finished in fifth overall so I’m happy with the day and looking forward to the last three rounds. I can’t expect to be on the podium every round with starts outside the top ten, but they’re improving along with my pace.”

“Shepparton wasn’t the round we were looking for. We qualified in sixth and we got a fairly good gate pick but it was the races that let us down. In moto one, I got pushed back off the start and I was in about sixth place, but at the 12-minute mark I had a bit of a problem with my bike setup and I ended up dropping back to 11th which we were really disappointed with. In the second moto I got a similar start, but we had made some changes to the bike in the lunch break and it definitely made a bit of a difference. I slipped back to ninth, but we were happier with how that race went. The two results from Shepparton are just not good enough, I’ll be working hard over the next two weeks to make sure that we are better at Port Macquarie.”

The 2017 Motul MX Nationals will continue, with Round 8 set to be held at Port Macquarie in New South Wales on Sunday July 30, 2017. 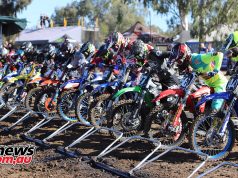