Good weather conditions were available as this week’s private two-day WorldSBK test in Jerez met its conclusion on Wednesday.

For Yamaha, the name of the game was getting to grips with the new R1. Although lap times have not been released from this private test, it would appear as though both 2014 World Champion Guintoli and 2013 British Superbike Champion Lowes are satisfied with their progress. The Briton recorded 68 laps (a total of 121 over the two days) despite a late lowside at Turn 2, while Guintoli’s 41 of Wednesday took his final sum of the week up to 100.

Alex Lowes – “My first go on the YZF-R1 and I absolutely loved it! We’ve got a lot of work to do but the potential of the bike is really good. There is a lot that I need to learn and change with my style, so I have a lot I need to improve myself, but I’m looking forward to the challenge. The bike has a lot of potential already as I’ve said so I’m looking forward to getting out in Aragon already – if there wasn’t so much work for the boys to do I’d want to go there tomorrow! I really enjoyed riding the YZF-R1, it’s been lots of fun and it’s nice to get the project started so successfully.”

Sylvain Guintoli – “Well, a very positive first contact with the YZF-R1! We’ve managed to do quite a lot of work but most importantly the base of the bike – the chassis and power delivery – feels really good. It was a positive test overall and I’m looking forward to carrying on the progress in the next practice in Aragon and Jerez. I really enjoyed riding it – it reminds me a lot of the M1 from 2007, I can see and feel the same philosophy behind the bike – so yes, a very positive first impression and it’s nice to feel such a good atmosphere with Yamaha.”

Despite the good weather, it was not an ideal day for the Kawasaki riders. On only his second day with the new bike, Rea crashed at Turn 5; although the Northern Irishman was able to ride back to the pit lane on the service road, some two and a half hours of track time were lost as the Kawasaki Racing Team cleaned up the bike, which itself sustained little damage as Rea had managed to drop it before reaching the barriers. In total, he managed 52 laps on Wednesday which adds up to 106 for the whole test, putting in a best lap time of 1’40.6.

Jonathan Rea stated: “Honestly, testing is not my favourite part of the job but it has been necessary to make a really constant effort because Kawasaki has brought many new components for the 2016 bike. It has quite a different character from last season so we had to evaluate many things. The main thing was the chassis balance of the bike and we have some positives from that. The engine character is quite different to the 2015 bike as well so we have been working with the electronics to maximise that and make it suit my style. We got through the vast majority of the test items and we are happy because we were able to lap a lot faster than we did during race weekend, with a similar temperature. So that is encouraging.”

Pere Riba, Jonathan Rea’s Crew Chief, stated: “We started with a mix between the 2015 and 2016 machines to start to follow the programme of understanding the good points from 2015 and the good points for 2016. Then, after some laps going out and in, we changed to the 2016 bike and we started to focus on that programme. There is quite a lot of difference on the engine side because there is a different inertia and other details in the engine. Also, the 2016 chassis so it is essentially a new bike. Because of this we have to understand every single change we make in the set-up of the engine and chassis. We are really happy with the results because we reached nearly 90% of the items we wanted to test. We improved the feeling of the bike for Jonathan step by step and at the same time the lap time was good. On race tyres we did a kind of simulation and the race times were already much faster compared to the fastest race at Jerez this year.”

Sykes also suffered a crash, as he lost the rear end between the rapid Criville and Ferrari corners at approximately 3pm. Miraculously, the bike remained on the race track and did not head into the gravel trap, meaning the title winner of 2013 was able to ride slowly back into the pit lane. His best lap time came in the form of 1’40.0, while his total laps for the test became 113 after putting in 69 on Wednesday.

Tom Sykes stated: “Overall the test was pretty good. We had some issues to deal with but yesterday started well considering the condition of the track early in the morning. Our plan today was to work through a lot of things, some interesting components. All things considered I am happy with the progress of things. I also hit a bird today, and during a good lap! That caught me by surprise and I had to enter the pits because of the impact. The bird hit the screen and then hit me in the front of my crash helmet, right on my visor and chin bar! On the whole, it was a good test and it has set us up to be ready for the next one.”

Marcel Duinker, Tom Sykes’ Crew Chief, stated: “The track was not perfect in the early part of the day but we still continued with the testing schedule we started in Motorland Aragon and we confirmed the chassis set-up we developed there. So now that was done that on two different tracks and the performance was on a good level at each. We were at around 99% of the 2016 specification of the machine at the end of the tests. I think Tom did 64 laps on the first day and 53 on the second day and he set a lap of 1’41.0 on the final day, on race tyres.”

KRT and Yamaha’s next appointment will be at MotorLand Aragon on Monday 16 and Tuesday 17 November; also on that occasion, Nicky Hayden will make his World Superbike test debut with Honda as the 2006 MotoGP World Champion switches series for 2016. 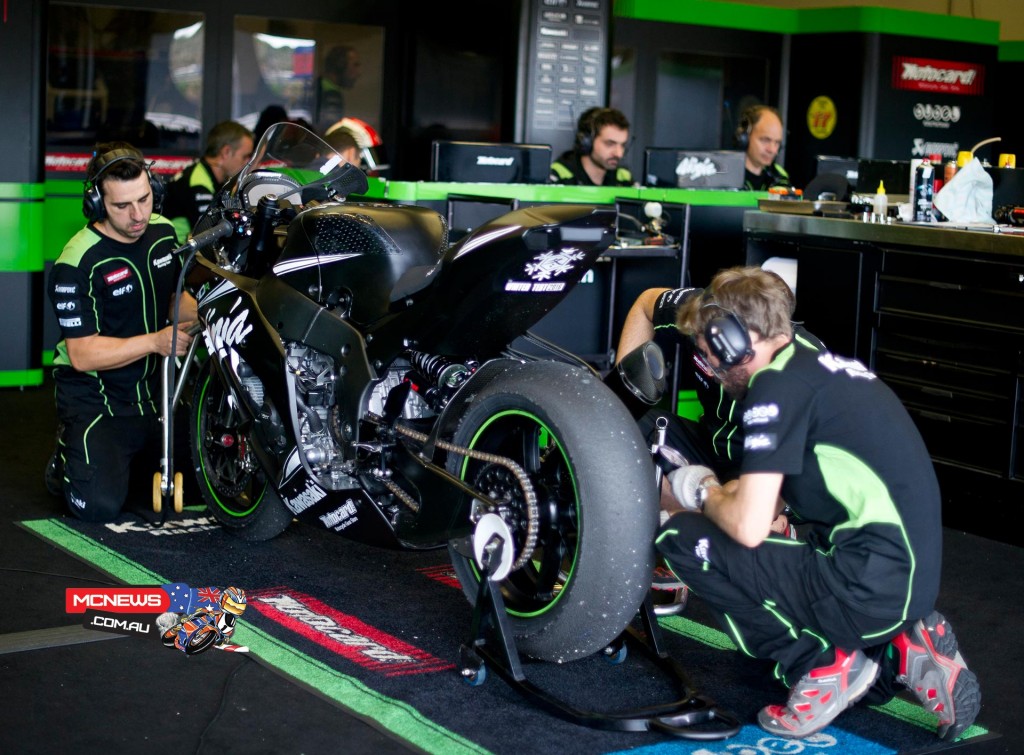