In a race which started after a delay due to wet conditions Marquez judged the 26-lap challenge to perfection, running with Dovizioso at the front in the early stages and asserting his authority as the riders changed to dry set-up machines on the seventh lap.

Marquez eventually clinched the win by 6.7s seconds to become the first rider since the great Giacomo Agostini in 1971 to win the first eight premier-class races of the year.

Dovizioso stepped onto the rostrum for the second time in 2014, with Pedrosa completing the podium after holding off the pursuing Aleix Espargaro (NGM Forward Racing) for several laps. Espargaro rode well to hold fourth, having started on pole on the ‘Open’ Forward Yamaha.

Valentino Rossi (Movistar Yamaha MotoGP) took fifth having shown great pace in the second half of the race, his problem being a late decision to swap back from slicks to wets at the start. Rossi started from pit lane on wets, therefore, and recovered considerable ground before and after eventually the swap back to slicks.

Broc Parkes (Paul Bird Motorsport) rode superbly to 11th having started from pit lane following a problem on the warm up lap. Pol Espargaro (Monster Yamaha Tech3) retired with six laps to go after crashes on slicks and then wet tyres. 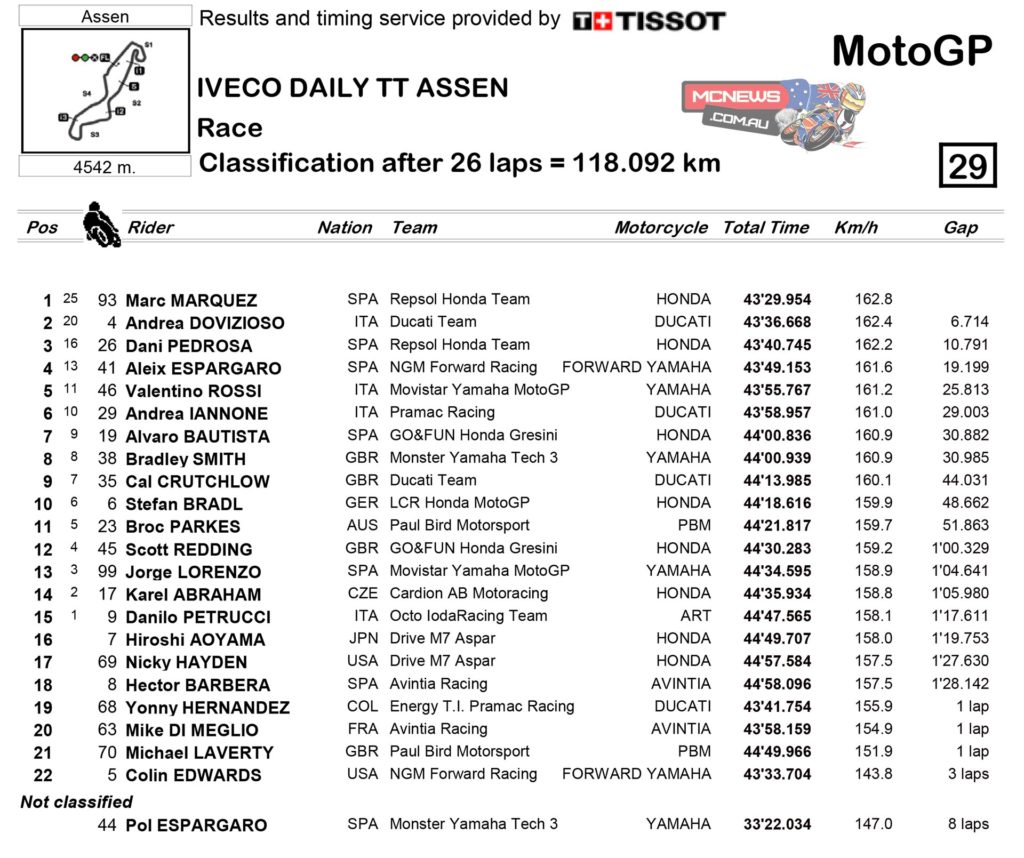 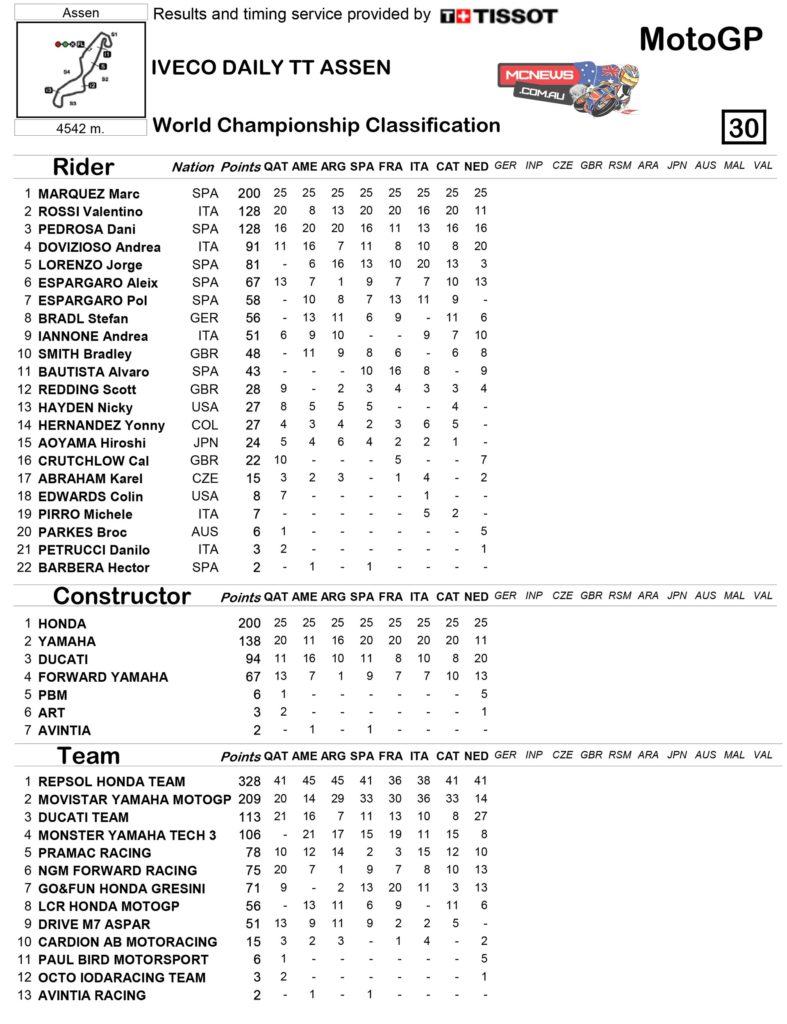 The 32 year-old Australian former premier class rider won from 23rd on the grid in his 211th Grand Prix, crossing the finish line 0.3s ahead of Viñales, with Kallio 0.4s further back. It is West’s first win since the 2003 Dutch TT.

Simone Corsi (NGM Forward Racing) finished unlucky 13th after crashing out of the race lead at the midway stage, whilst Luis Salom (Pons HP 40) was 15th having crashed from third place in the final stages. Sam Lowes (Speed Up) had led the race at the start having taken the holseshot, but crashed twice after trying to stay with Corsi at the front.

Several riders crashed and rejoined on a wet track which saw dry lines forming despite further rain during the course of the 24 lap, 109 km battle. Some took gambles on slick tyres which did not pay off whilst Dominique Aegerter (Technomag carXpert) went for a front wet, rear slick combination which only produced a 21st place result. 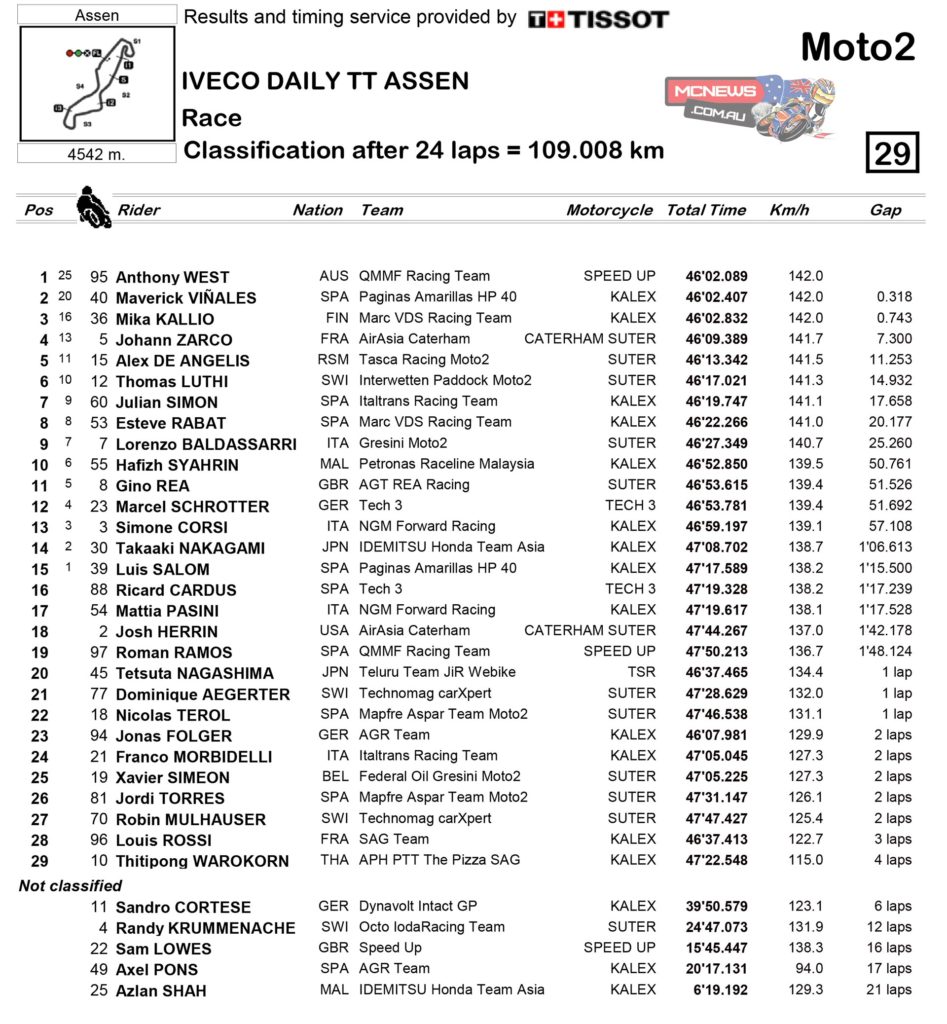 Marquez built on his Barcelona win with another dominant performance to take victory by three seconds, leading for the majority of the race from second on the grid. His teammate Rins briefly challenged him for the lead but the younger Marquez brother eventually had too much for his compatriot over the course of the 22 laps.

Rins overtook Oliveira for second in the final stages, whilst 12 seconds further back Alexis Masbou (Ongetta-Rivacold) won a tremendous battle for fourth between a group of seven riders.

Miller crashed in the early stages whilst Fenati battled to 18th after coming back from an early mistake and then crashing to drop back again.

Neither of the championship front runners were hurt and they remain first and second in the standings with Miller still seven points in front, though Marquez has now pulled level second with Fenati, whilst Rins sits fourth – three points adrift of his teammate.

A nasty collision between Luca Grünwald (Kiefer Racing), Juanfran Guevara (Mapfre Aspar Team Moto3) and Alessandro Tonucci (CIP) at the chicane on the final lap saw them all crash out, but fortunately all three were uninjured. 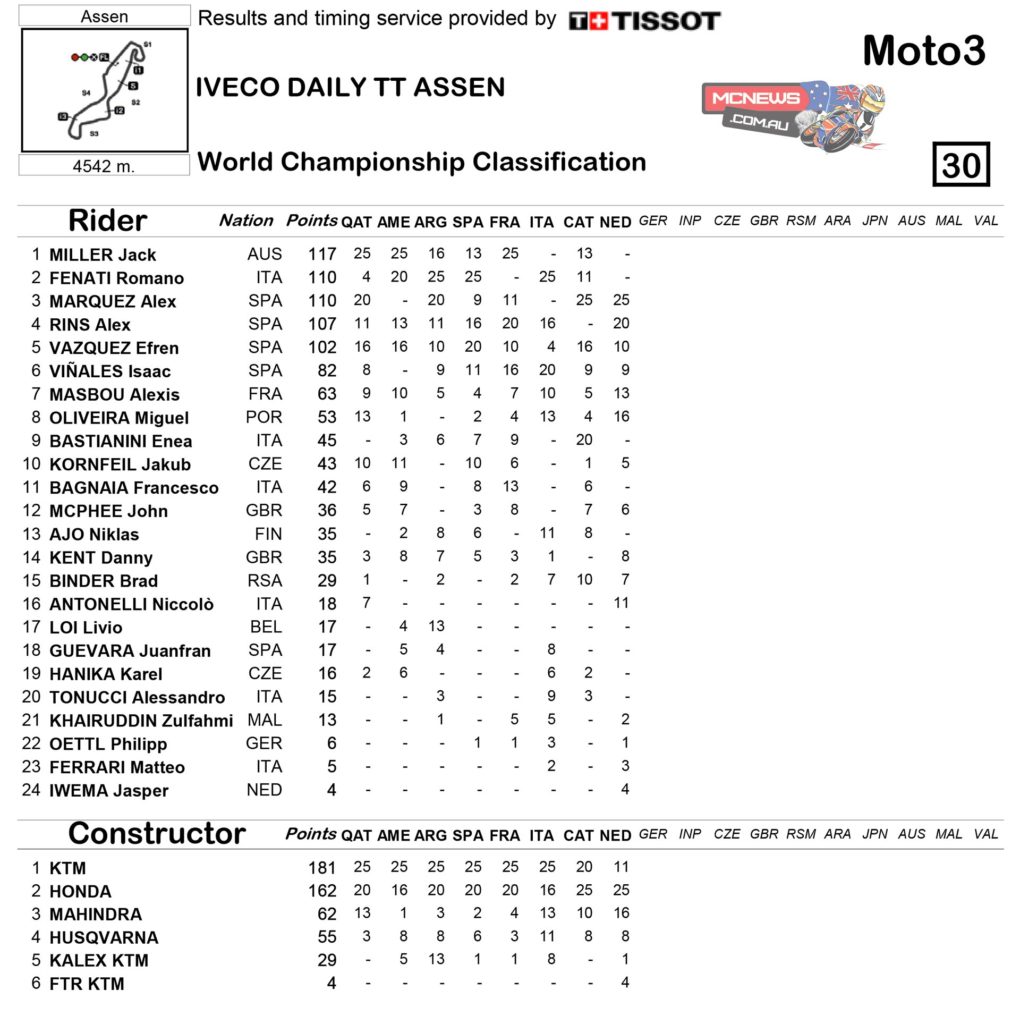