The Monster 1200 is packed with new design and content and available as a higher-performance S version. The Monster 1200 has a sleeker tank, a fully redesigned sports-style tail, an all-new technologically advanced headlight and a first-rate electronics package derived from the one on the 1299 Panigale.

The Monster 1200 features the latest version of the Testastretta 11° DS engine, ensuring not just outstanding power and torque but also full, smooth power delivery right off the bottom end.

The frame is a classic Ducati Trellis that employs the Testastretta as a stressed chassis element.

Attached to the engine are the new, compact single-sided swingarm and the all-new die-cast aluminium rider pegs, separated from the passenger pegs.

Top-drawer electronics gives the Monster 1200 true Ducati sport naked performance, but in a way that makes it accessible to everyone, ensuring high levels of active safety at all times. 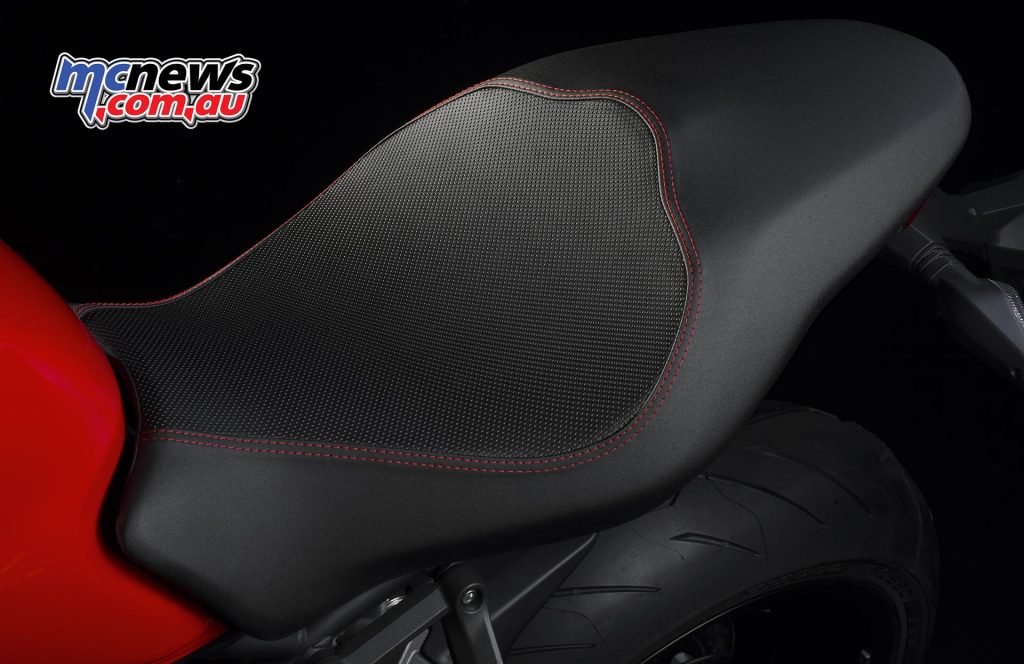 The exclusive Monster 1200 S sharpens that Monster sports performance to an even finer edge thanks to a 48mm Öhlins fork and rear Öhlins monoshock, both fully adjustable.

Awesome braking is provided by two 330mm Brembo discs at the front working in concert with Brembo M50 monobloc calipers.

When the Ducati Design Center started working on the Monster 1200, their goal was to come up with a sleek, compact bike with true sporting character, to get back to the “sport naked bike” concept and the anodized aluminium attachment clip has made a comeback.

The subframe also supports the passenger footpegs, now separated from the rider’s pegs. This new configuration gives the Monster 1200 a sporting line while improving ergonomics.

Another feature that has always been a Monster hallmark is the headlight. Fully redesigned for this motorcycle, it now features dual parabolas and, on the Monster 1200 S, the DRL (Day Time Running Light) too.

The adoption of this new headlight has led to the development of a new instrument panel support, now attached to the handlebar risers.

This gives the front end a visually “lighter” look, thanks also to repositioning of the indicators, now underneath the top yoke and not on the headlight itself. Moreover, the motorcycle also features new switchgears.

Another important step taken by the Ducati Design Center has been to reduce – and simplify – the number of plastic parts. The expansion tank cover is now more compact, the radiator cap is minimalist and the exhaust manifold guard has a more “technical” look.

The Monster 1200 is powered by the liquid-cooled 1198cc twin, 4-valves-per-cylinder Testastretta 11° DS. Euro 4-compliant, the engine is also a structural element of the chassis set-up, with attachment points on the Trellis frame.

This engine delivers a huge 150hp at 9250rpm. Thanks to the new throttle bodies and the dedicated exhaust, Ducati has produced an impressive torque curve that means even more riding enjoyment, generating a maximum torque of 126.2 Nm at 7.750 rpm.

The double flame front ensures complete combustion within an ultra-short interval, giving – together with the secondary air system that optimises performance by reducing combustion cycle dispersion but without affecting emissions – smoother power delivery and an even more enjoyable, exciting ride.

Keeping the engine cool is a curved radiator with two high-efficiency electric fans.

The Monster clutch, instead, is of the oil bath slipper type with ultra-low effort lever control. Spring load is automatically increased by a progressive self-servo system.

The outcome is much better fingertip “feel”, ensuring excellent comfort when frequent gear changes are inevitable in city traffic or on long rides.

When the rear wheel exerts back-torque, the same mechanism reduces pressure on the clutch discs, activating the slipper function and so preventing rear end destabilisation during aggressive downshifting.

The exhaust ducts, with a cross-section of 50-52 mm, are part of a 2-1-2 system designed with identical lengths for both cylinders in order to maximise power and delivery efficiency. This system features a lambda probe for each cylinder to make fuelling both autonomous and optimal.

Ducati’s nonstop investment in quality and reliability means the Testastretta 11° DS engine on the Monster 1200 has lengthy maintenance intervals: valve timing adjustment is now needed just once every 30,000 km (18,000 miles). 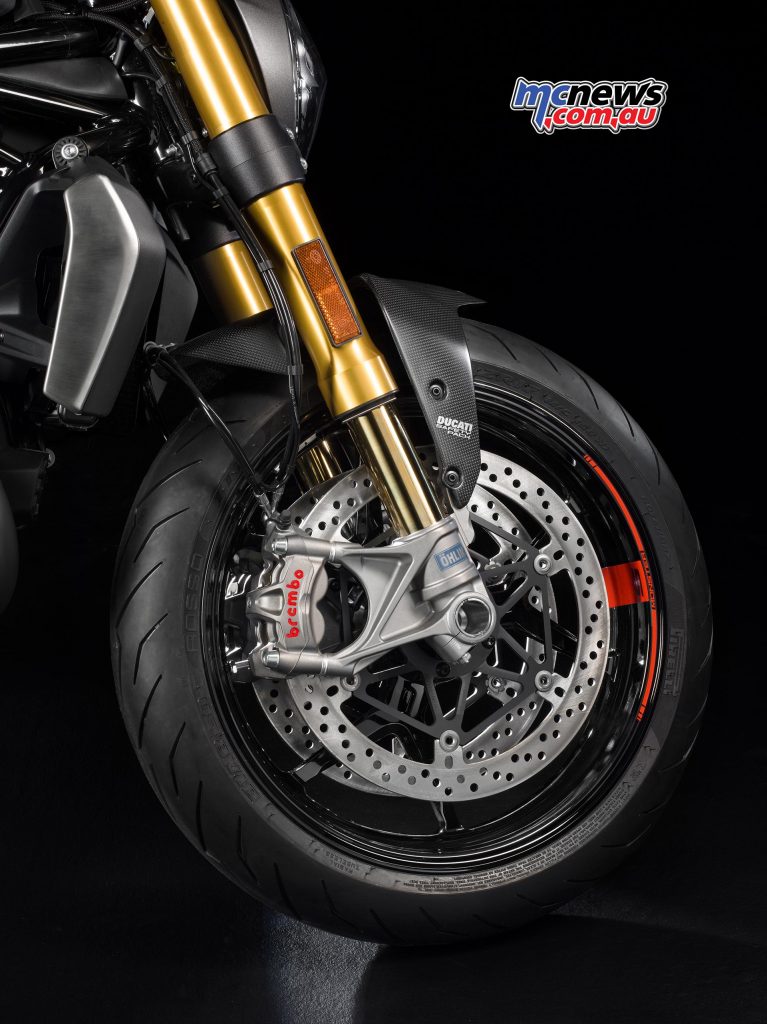 On the Monster 1200 the engine acts as a load-bearing element, the Trellis frame being attached to the cylinder heads, a racing-derived concept first applied on a factory bike with the Panigale project.

This configuration gives a highly compact, light frame, while large cross-section tubing gives the high torsional rigidity that is perfect for bringing out the motorcycle’s dynamic performance.

The Monster 1200 also boasts an all-new, beefier swingarm and a compact 1,485 mm wheelbase.

The rear seat-carrying subframe – also attached directly to the engine – has been redesigned to provide a compact structure that also supports the new passenger footpeg struts.

These pegs are separated from the rider’s to ensure greater freedom of movement in sport-style riding.

Both rider and passenger footpeg attachments are made of die-cast aluminium and mount aluminium pegs. To underline the Monster’s sport pedigree, the rider’s pegs also feature aluminium heel guards.

The Monster 1200 features fully adjustable 43mm Kayaba forks up front, while the Sachs shock absorber at the rear has spring pre-load and rebound damping adjustment.

At the rear, the shock absorber works in concert with progressive linkage, it is attached directly on the vertical cylinder head at one end and on the die-cast aluminium single-sided swingarm at the other.

Both models mount Pirelli Diablo Rosso III dual-compound tyres, 120/70 at the front and 190/55 at the rear, that combine mileage-enhancing durability with constant grip, even in assertive cornering.

Both models feature front brake radial pumps with separate reservoirs; a single 245mm disc at the rear is gripped by a Brembo caliper that mounts enhanced-efficiency sintered brake pads.

These components ensure top-notch braking performance, a feature that has always been a Ducati hallmark.

Both the standard and S version of the Monster 1200 come with the Ducati Safety Pack (DSP) which, thanks to the Bosch Inertial Measurement Unit (IMU), integrates Bosch 9.1MP Cornering ABS, Ducati Traction Control (DTC) and Ducati Wheelie Control (DWC) to ensure high levels of safety.

The Monster 1200 boasts a Brembo braking system with the Bosch 9.1MP Cornering ABS device, the latter makes use of the Bosch IMU (Inertial Measurement Unit) platform to optimise front and rear braking power even in critical situations and with the bike at considerable lean angles.

Level 2 ensures a balance between front and rear: while rear wheel lift detection is disabled the Cornering function is applied and calibrated for sport riding.

Level 3 optimises braking action: rear wheel lift detection is enabled and the Cornering function is on and calibrated for maximum safety.

Nevertheless, the ABS can also be fully disabled via the instrument panel in any Riding Mode, and settings can be saved and recalled at the next Key-On.

The Monster features the latest DTC software version, optimised to ensure a soft response thanks to intervention on spark advance only.

The system lets riders select from among eight different profiles, each calibrated to provide a rear wheelspin tolerance that matches progressive levels of riding ability and road conditions (classified from one to eight). Level 1 minimises system intervention, while level 8 ensures maximum traction on wet road surfaces.

Ducati sets DTC levels for each of the three Riding Modes; however, these can be personalised to suit riders’ preferences and saved on the individual menu settings. The DTC function can be switched off in any Riding Mode and will then stay off until the next Key-On.

The Monster 1200 is equipped with 8-level DWC (Ducati Wheelie Control). The system analyses vehicle wheelie status and consequently adjusts torque and power to ensure maximum yet safe acceleration without any imbalances in the set-up.

Like the DTC, this feature has 8 different settings and is integrated into the Riding Modes.

The Monster 1200 has three Riding Modes (Sport, Touring and Urban), each programmed to act on the electronic Ride-by-Wire (RbW) engine control system and the ABS, DTC and DWC levels.

The available modes stem from a combination of cutting-edge dedicated technologies.

Riding Modes can be changed on the go, while personalised ABS, DTC and DWC settings need to be made with the bike at standstill and the throttle closed.

The control panel on the Monster 1200 features a latest-generation TFT display. This has three different configurations called Core, Full and Track, each designed to show the information that is best suited to certain riding situations. All three screen configurations show the currently selected gear.

In Urban Riding Mode, the display adopts the Core configuration, minimising the amount of data displayed, as is advisable in an urban environment The most evident information is vehicle speed, this is shown in the centre of the screen while the selected gear is shown on the right.

In Touring Riding Mode, the display changes completely and goes to the Full configuration to show as much useful travelling info as possible.

In Sport Riding Mode, the display adopts the Track configuration, providing only information related to sport riding. The rev counter graphic is reset with a pure Superbike-style layout.

The TFT control panel on the Monster 1200 can be personalised and the rider can choose the display mode whatever the selected Riding Mode.

On the Monster 1200 the headlight offers a powerful halogen light source and LED “horseshoe” side lights.

The Monster 1200 S headlight is characterised by the incorporation of the LED Daytime Time Running Light (DRL) system, which ensures perfect vehicle visibility during the day.

At the rear, both versions have full LED lighting (both brake and tail light). On the S version, LED lighting technology is also applied on the indicators.