The Motul MX2 class roared back to life early in New South Wales this morning, with competitors hitting the track for the first time in five weeks for Practice and Qualifying, followed by two action packed races.

Following a 25-minute practice and qualifying session this morning, it was KTM two-stroke rider Mastin who returned from the break as the man to beat, setting the fastest lap time (1:43.211) ahead of Penrite CRF Honda Racing Team’s Kyle Webster (1:43.429), followed by Raceline Pirelli KTM’s newest recruit Jay Wilson who made his first appearance for the season by qualifying in third (1:43.591). 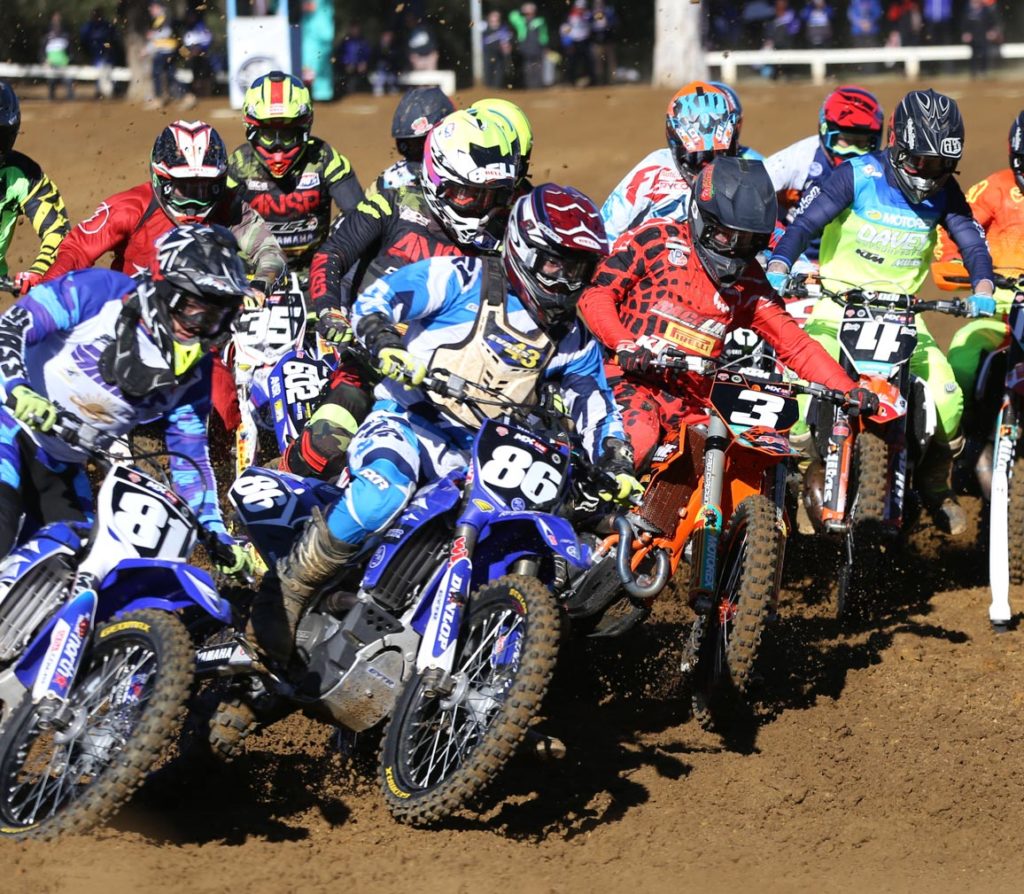 The Motul MX2 category was the first class to race at Nowra this morning, and when gates dropped on moto one it was Raceline Pirelli KTM’s very own Jayden Rykers who secured the Raceline holeshot, however it only took a handful of turns for fastest qualifier Mastin to move into the lead position.

After two laps, Rykers found himself in second, while Northern Queenslander Richie Evans managed to navigate his way to an impressive third. Surprisingly, red plate holder Wilson Todd was well back in the field in seventh place after three laps on the tight and technical, Nowra circuit.

With 30 minutes on the clock in moto one, the MX2 class paced themselves, but the one rider who continued to set the speed on track was Mastin, who by lap five was still the quickest rider on the circuit.

As riders headed into their sixth lap, the leaders were already into lapped traffic, forcing competitors to navigate their way through the back markers, but it was the battle from fourth through to seventh between Hamish Harwood, Mitchell Evans, Jackson Richardson and Todd which was keeping spectators on the edge of their seats.

Just as the battle on track was heating up, Harwood cracked under the pressure, going down hard and allowing Serco Yamaha’s Richardson, Evans and DPH Motorsport’s Todd to inherit a position each. From there, Richardson was on a charge, and it wasn’t long before the rider from Cairns made the move on Richie Evans for third.

After 20 minutes on track the running order saw Mastin continue to lead from Rykers, and Richardson, while Richie Evans maintained fourth ahead of Todd and Harwood. Seventh position was held by KSF Racing’s Dylan Wills, while third fastest qualifier Wilson maintained eighth.

And when the chequered flag flew it was KTM two stroke Davey Motorsport’s rider Mastin who secured the first MX2 win of the second half of the season, second place went to Raceline Pirelli KTM’s Rykers, while Richardson completed the podium finishing third.

Incredibly DPH Motorsport’s Todd clawed his way back to fourth, followed by Richie Evans, Harwood, Wills and Webster. Serco Yamaha’s Evans wrapped up moto one in ninth following a crash mid-moto, while Wilson concluded his first appearance of the season in tenth.

In the final moto for the Motul MX2 class spectators dotted the fence line, eager to see whether any rider had anything for race one winner Mastin, and when gates dropped for the second time a huge crash off the start shifted the attention away from the first turn, but when riders gathered their composure it was Mastin who found himself in the lead from Jay Wilson in second, while Richardson slotted in to third.

After a lap on track, Davey Motorsport’s Hamish Harwood joined the battle for positions at the front, tagging on to Richardson’s rear wheel. Behind the top four was Richie Evans and red plate holder Todd, while privateer Joel Evans was having an outstanding ride in seventh position.

By the third lap, Richardson put the foot down, and made his presence known – passing third fastest qualifier Wilson and slotting up into second position.

With only 20-minutes on the clock in moto two, the MX2 class was sprinting, putting in one final dash for points on the gruelling Nowra surface. And much like in moto one, Richardson found another gear, and before long closed in on Mastin where he began to apply the pressure for the race lead.

But just as Richardson closed in, Mastin retaliated, and despite the Serco Yamaha rider closing the gap, he wasn’t able to make the move on the KTM two-stroke rider.

By the halfway point, the running order saw Mastin continuing to lead from Richardson, Wilson and Harwood, while behind the top four riders was red plate holder Todd followed by Yamaha’s Mitchell Evans in sixth.

As race two reached it’s closing stages Richardson found some new lines, and thankfully they paid off – the Serco Yamaha rider was able to find an open section of the track and make the pass on the KTM rider, taking on the race lead for the first time in the moto.

From there Richardson looked more and more comfortable out in front, stretching out his lead on Mastin and storming closer to a race win.

Unfortunately for Harwood, a mistake from the New Zealander in the later stages of moto two saw him drop back to seventh, allowing Serco Yamaha’s Mitchell Evans to slot up into fourth.

By the time riders received the last lap board, Richardson was untouchable out in front, while Raceline Pirelli KTM’s Wilson who had held third position for the majority of the moto dropped back to fifth allowing the likes of Evans and Webster to blow by him.

And when the chequered flag flew for the final time, it was Richardson who collected the final Motul MX2 race win, second place went to Mastin while Evans charged back from a difficult start to finish in third.

But it was 1,2 results that awarded Mastin the round win in Nowra today, second spot on the podium went to Serco Yamaha’s Richardson, while Raceline Pirelli KTM’s Rykers proved that consistency pays off, finishing in third overall.

“Finally ended up getting the overall today – I’m pumped especially that I got it this weekend too, I’ve been sick all week and I lost a lot of weight prior to this round, so to go 1,2 and to get the overall I’m stoked. I’m just going to keep doing what I’m doing and stay on schedule – I can’t thank the whole crew of people who help me enough. We worked a lot on bike setup during the break and that helped a lot.”

“I put in two good motos today and was finally able to break through for a race win. At nearly every round this year I have been in positions to win races but I haven’t been able to do it so it’s a relief to finally win one and know that I can do it. The championship is really tight between four of us and no one can afford to make a mistake with just eight races left. I feel like I’m hitting good form at the right time and will continue to work hard to ensure I give myself every opportunity to win this thing. Thank you to Serco Yamaha again for their support and it’s nice to reward everyone with a podium today.”

“It was a battle all day and not much separated the top 10 riders in terms of speed so you had to work really hard for your positions. The first moto crash happened when I hit a jump and got kicked pretty hard and went down. I hit me head pretty hard and smashed by peak on my helmet so I looked like a bit of a goon out there. But it was nice to bounce back in moto two with a strong ride. It helped a lot in the championship and even on a day where things didn’t go smoothly, I was able to stay close in the points and even gain one. It’s now straight back to work and prepare for the next round.”

“I’m happy to retain the red plate, although today just didn’t go to plan. Really, I was lucky to not get hurt in my crash in the second race, I’ve given Ben some work to do to fix it during the week! Now I’ll be putting my head down and focusing on the next round.”