Day 1 of the BMW Motorrad International GS Trophy Central Asia 2018 saw competitors head south from Ulaanbaatar on a route that will see them circle southern Mongolia, including into Gobi Desert, covering over 2500km, with the day’s results delayed but Australia on equal 13th with 13 points once available. 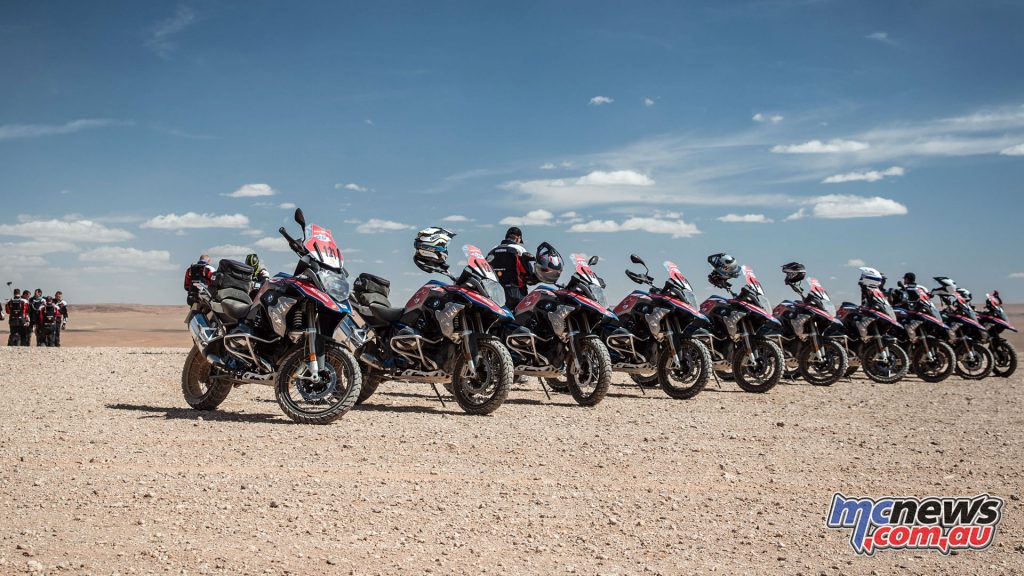 After rains and high winds overnight the day started cool, barely 10ºC for the 7.00 am start. So it was on with rain jackets and set the heated grips to ‘2’ for the GS riders. But by the end of the first 100km, on the highway, the temperature had risen past 20º, on its way to a high of 26ºC.

The GS riders were at this point subjected to something of a baptism of fire as they took to the trails for the first time. These proved highly technical as the gravel trails frequently, and often suddenly, degraded to deep, loose sand. For some competitors this was a first experience of sand riding – which demands a committed riding technique. Consequently there were many ‘offs’ as the competitors came to terms with the terrain. 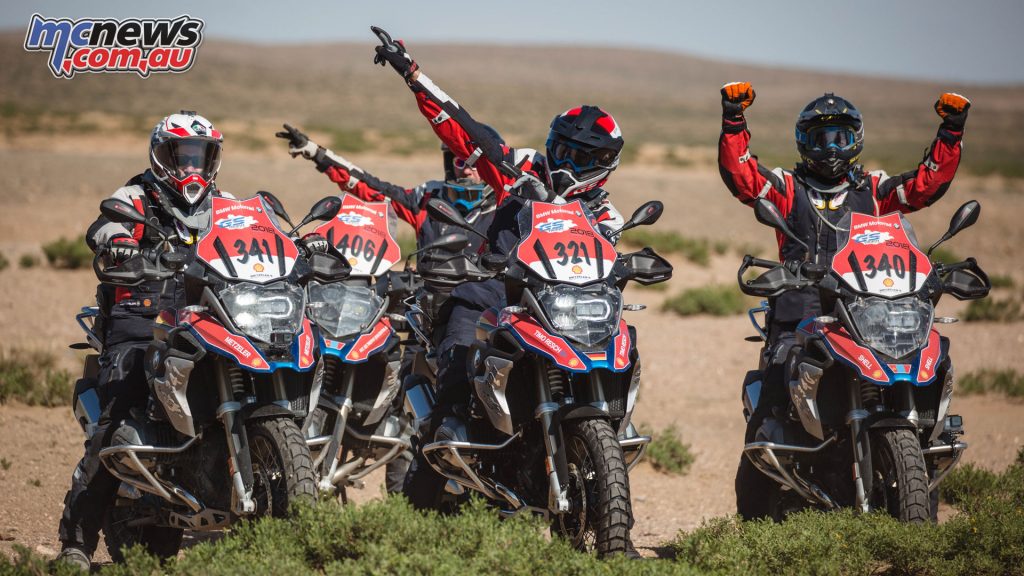 While the trail was demanding – portent of a tough week ahead – the scenery was truly breathtaking, ‘like the surface of the moon’ was a common observation, as the barren nature of this vast arid landscape made itself felt.

Along the way – as if the trail wasn’t test enough – the teams faced two special tests. SP1, the Trial Challenge saw the competitors tested on their machine handling skills as they rode a tough loop through a rocky outcrop while being hampered by deep sand. The object for each rider being to complete the course as quick as possible with fewest mistakes, time penalties accruing for putting feet down and crashing or running outside the course. 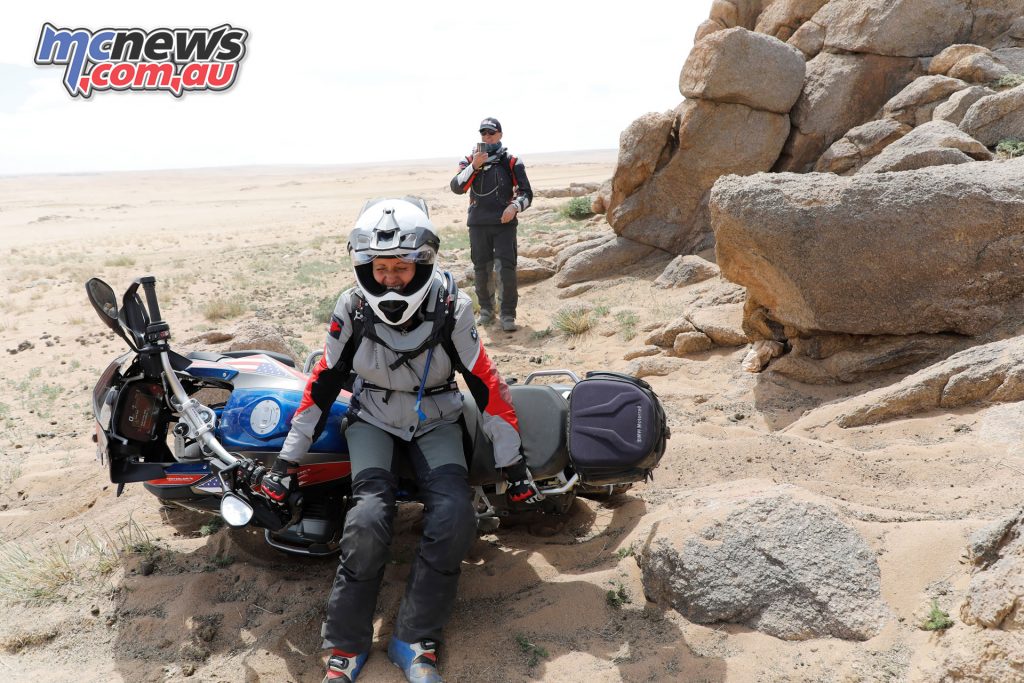 Near the end of the day SP2, ‘Magic Cliffs’, was a navigation exercise, completed on foot, where using a GPS device the teams needed to navigate to four waypoints. At each point, if successfully found, the teams would collect letters to make a complete word for bonus points. Sounds straightforward, only the cliffs were 300 feet (100m) tall and the whole exercise had a time limit of just 20 minutes. 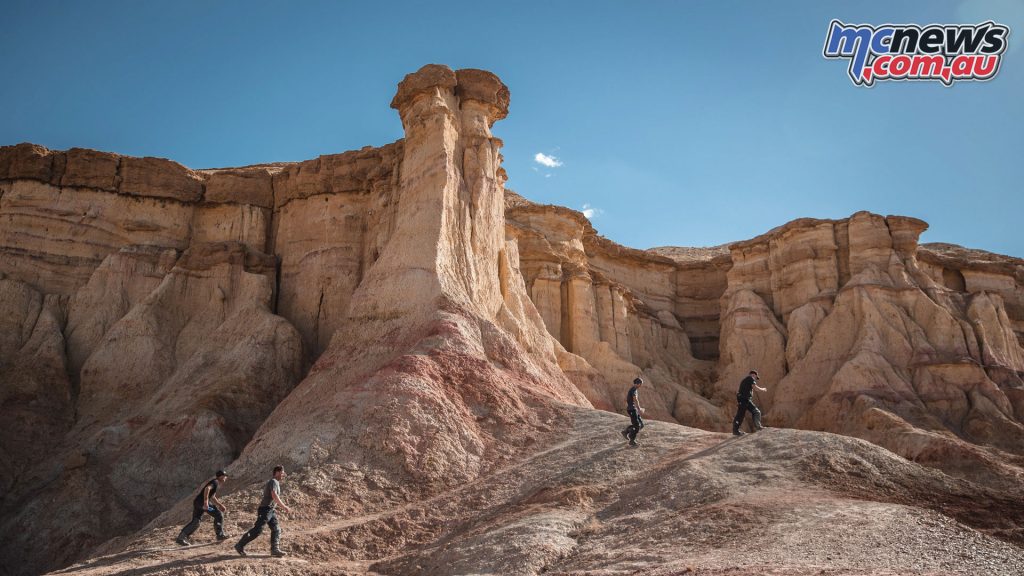 The finish at Camp Tsagaan Survaga came 11 hours after the start, and consequently was much welcomed. This being the GS Trophy, the competitors exhausted or not, still had to erect their tents, check their bikes and make preparations for Day 2. 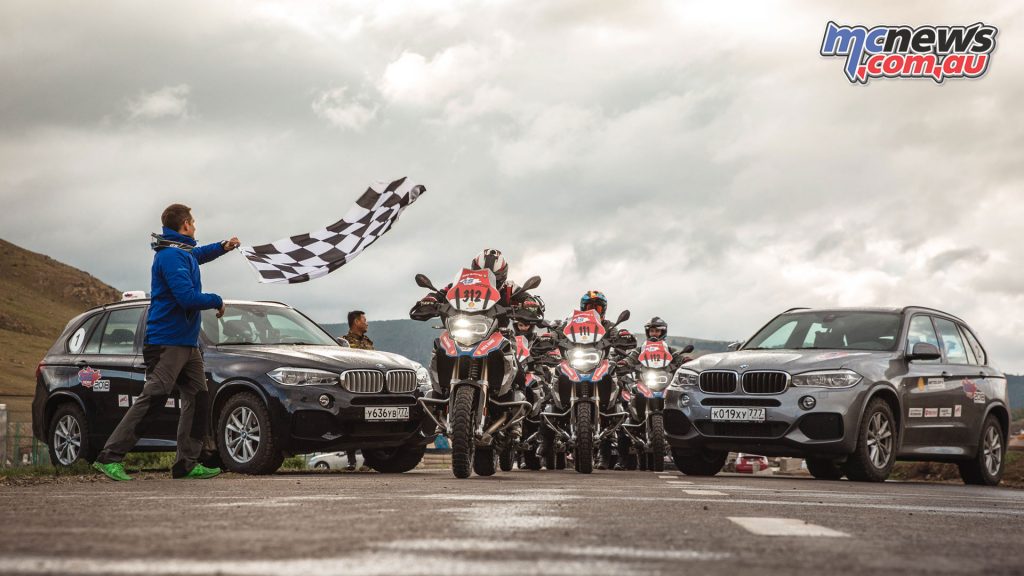 While the distance was ‘just’ 234km for Day 2’s stage of the 2018 BMW Motorrad GS Trophy in Mongolia, the fact 190 of those kilometres were off-road meant the intensity for the riders was high. 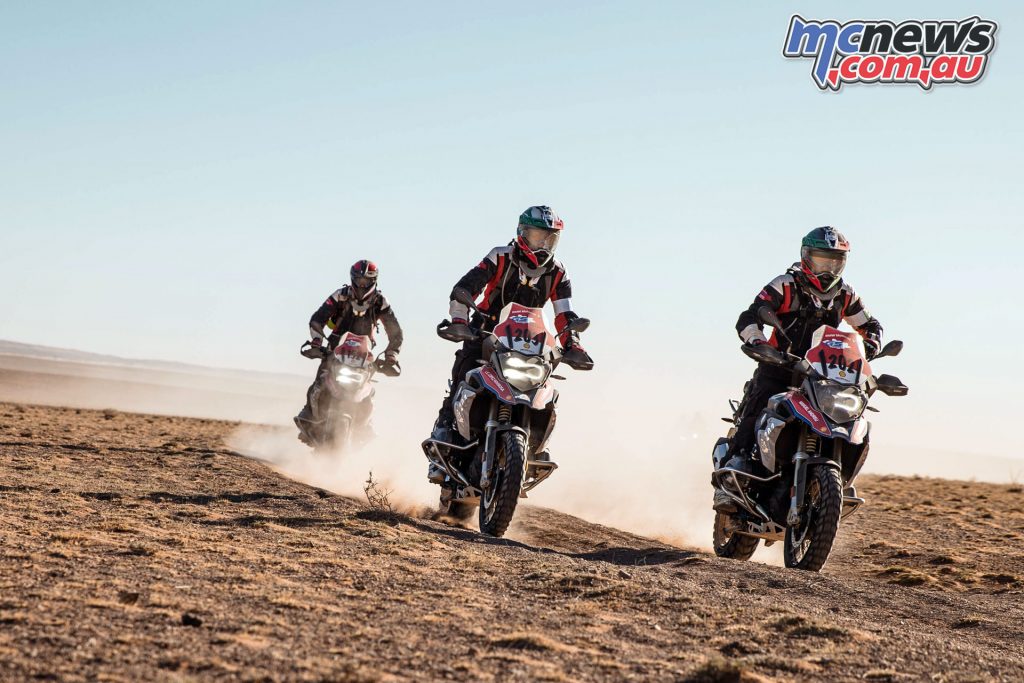 The day started gently with a scenic ride over rocky outcrops as the course weaved its way out from Camp Tsagaan Survaga toward a huge sand and grass plain, 30km across – an experience that was akin to surfing as the GSs floated over the terrain.

Typically, the semi-desert then changed in nature at the 100km mark, becoming a gravel plain that led to a rock formation in the shape of a camel head, where a special test called “Camel Head” required the teams to ride a sand and rock trials course, this time simultaneously as a team. 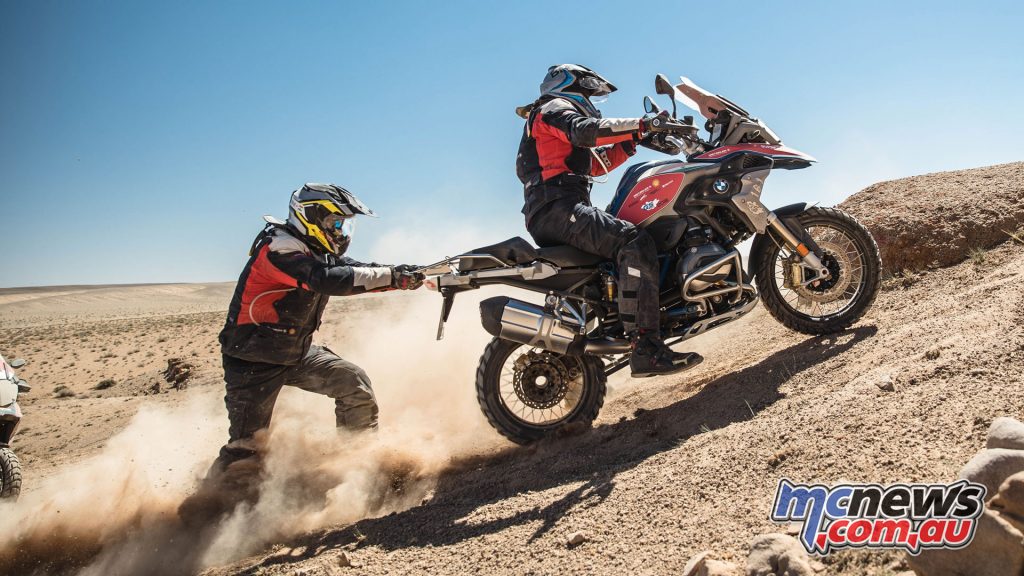 Immediately after the test the terrain changed in nature again, this time to deep sand, which required fine balance and throttle control at slow speeds. By now noon had come and gone, and the air temperature was 32o – with no cooling breeze.

As the course wound its way up a narrow valley the sand remained deep, deeper still in the dried up river beds, and many a GS rider came to a halt. Teamwork comes to the fore at times like this, as the team members pushed, pulled and helped guide each other through the sand-maze. 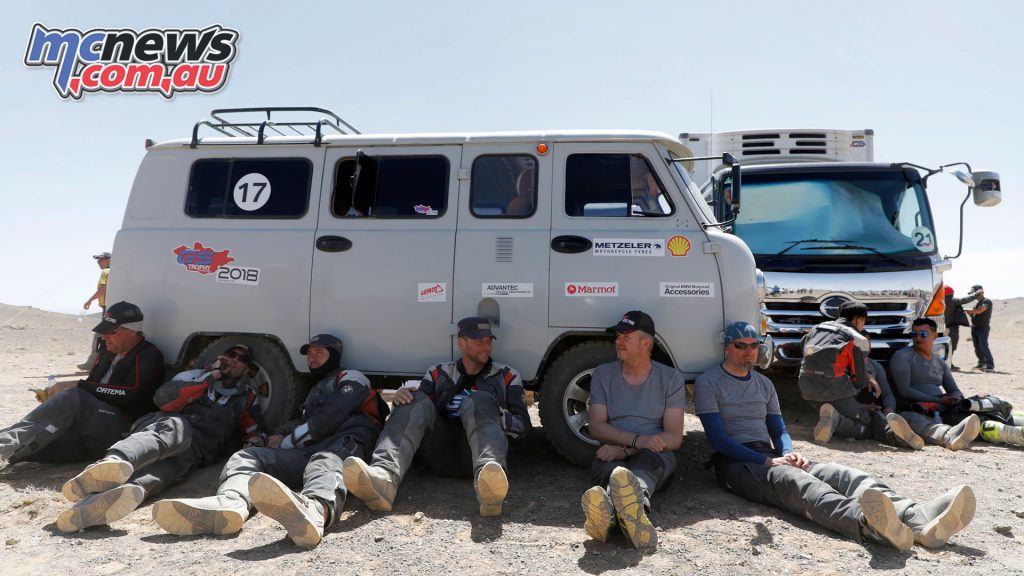 The valley led to a high plateau with several rocky outcrops to navigate around before reaching a dry lake (a clay pan) where the riders found special test 5 that required them to ride a tight snaking course against the clock, with a defined stop box at the finish. While again slow speed, this test required fine balance and throttle and clutch control as the fastest riders drifted in and out of the tight turns. 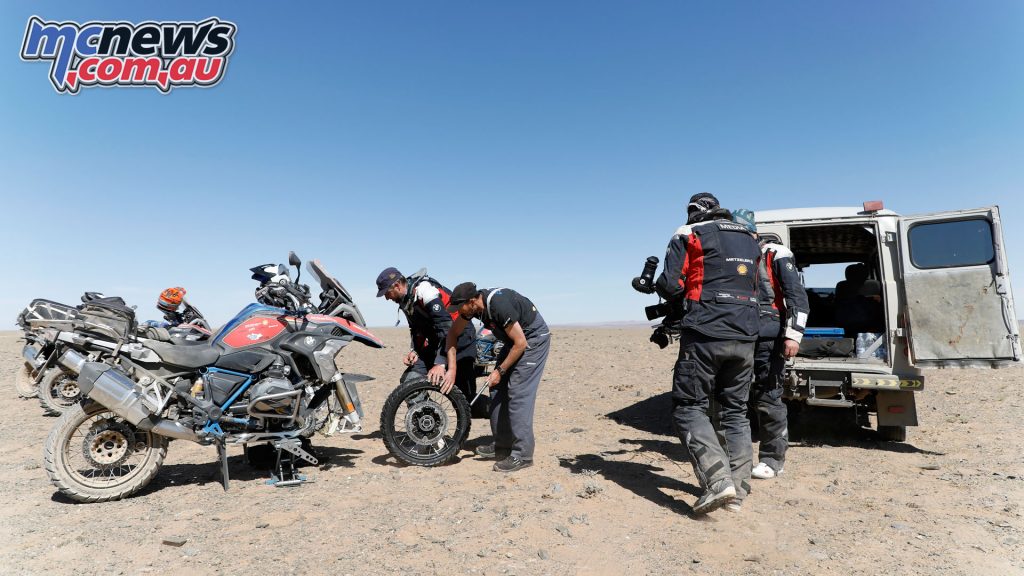 With the afternoon heat staying at the 32º mark the teams were thankful to find a shortish final 50km section along gravel tracks to the finish. 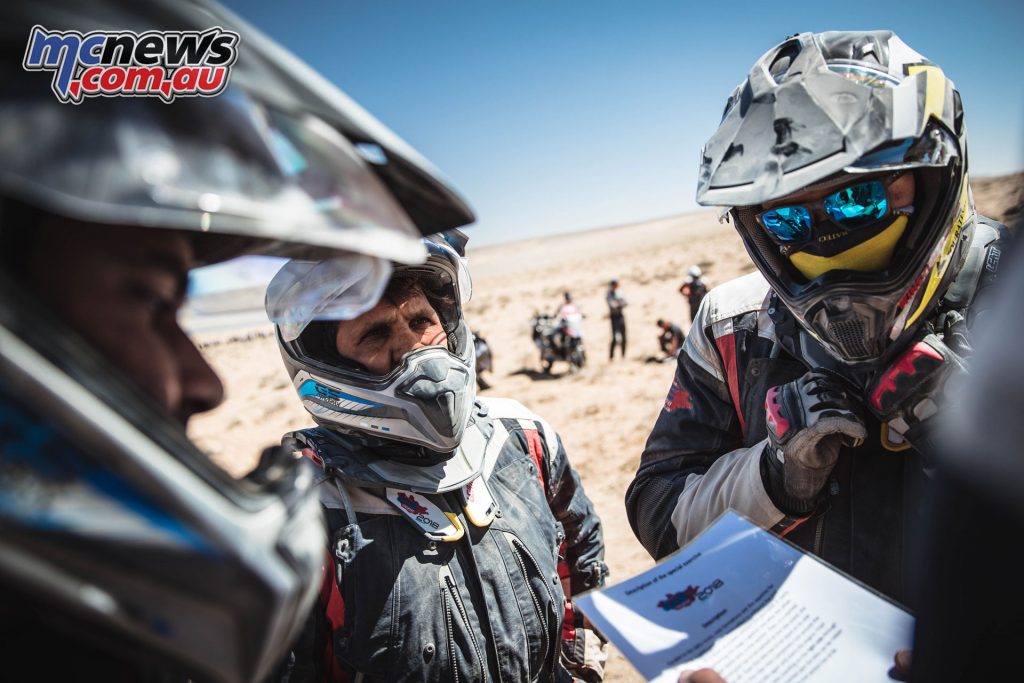 Unfortunately a few riders have fallen, each received immediate attention from the professional medical team at the event. They have been transferred to hospital.

Results for Day 2 are TBA.

MotoGP 2018 The Game | Set for release on all platforms