CDR Yamaha Monster Energy Team’s star rider, Dean Ferris, continued his outstanding start to the 2018 motocross season by taking another dominant victory at round two of the MX Nationals, held in perfect conditions over the weekend.

The Appin track was at its best with a challenging layout, well prepared dirt and a good size crowd on hand to witness Australia’s best motocross riders do battle.

Ferris, who has been the benchmark for Australian racing for the past two seasons, again set the bar high with an impressive performance that saw him dominate both races contested in the premier MX1 division and extend his lead in the championship.

The day didn’t start out as he had planned, missing the top five fastest qualifying times and therefore not able to compete in the Raceline Superpole event and the handy three points on offer. But, the ship was soon righted in moto one as the gates fell and Ferris powered his Yamaha YZ450F into the lead and set off at a brisk pace. His rivals kept him in sight but a relentless and determined Ferris kept his head down and went on to take the race win by 16 seconds.

Moto two didn’t go drama free as the race needed to be stopped when a rider fell and required urgent attention. Once the track was clear, the field was re-gridded in the running order with Ferris at the front of the pack and the remaining 20 minutes of racing was completed. Ferris was the first rider across the finish line and claimed the race win when times of both parts of the race were added together.

Ferris has now won all four motos contested at the opening two rounds and already holds a commanding lead in the championship but the two-time champ understands there is plenty of work to be done and a long way to go in the 10-round championship.

“Another good day for myself and the team. Appin has always been good to me and since my return to Australia in 2016, I have won here so I always enjoy racing this track. Missing the Superpole event was a bit odd and it’s the first time I can remember not being in it. I felt I was riding pretty good in practice and qualifying but when the team told me I was sixth, I was a bit stunned. Thankfully, it didn’t matter once the races started and I was able to win both races and keep my good start to the championship on track. My YZ450F was working well today and the team do an amazing job of making my life easy. Aiden, who works on my bike, puts in the hours and we make a great team so thank you to him and everyone at CDR Yamaha Monster Energy team.”

“MX1 was awesome, both the boys were on fire in practice – one would go quickest, then the other would go quickest – it was just good to see them up front, so I knew we were in for a good day. The first moto was pretty decent with Luke in fifth and Kirk rode like normal Kirk, putting on the charge in the last part of the moto to get second place. That last moto was exceptional to finally see Luke ride to his potential, because we’ve been working really hard with him this year – it really proved that he’s adapted well to the KTM 450 SX-F and managed to lead the race for more than halfway to finish third overall, which is a great result for him and the team. Kirk also walked away with good points in second position overall, which was another podium result. The team is working really hard and we’ll keep pushing, so we’ll see how we go at Wonthaggi.”

“I’m disappointed in some ways because I just feel a lot more confident and happy with the way I’m riding, so that’s why I think it hurts even more to finish second now. Everything’s clicking and I’m in the right position to win, but it’s just not happening for me. I started off the day well, in the first moto I was sitting around fourth, got into third and put on a hard charge for second. That second moto I was just sitting there, I didn’t really feel anyone flicked the switch and took off, so I slowly started to chip away at them and made a little mistake, went down and that’s all she wrote. It’s frustrating that a little mistake rewrites the whole day. Second overall is still good, but the points deficit is getting bigger and you don’t really want to give too much of a buffer at this point of the year.”

“It’s good to get the monkey off my back and get the first podium with the KTM Motocross Racing Team. These boys work super-hard and to repay them is a good feeling. I was kind of disappointed I let the race win slip, but Dean [Ferris] really picked it up in the end. I’ve got a bit of work to do, but I think I showed some good speed today, rode smoothly and didn’t let him fluster me, so I think that’s positive. I’m pretty happy and – like I said – I would’ve liked to have won the last one, but second is good as well, so I’m happy with it.”

Dylan Long, made huge strides forward in his racing at Appin and finished in fourth place in an incredible return to form for the Victorian based rider. By his own admission, the opening round was terrible for Long and his results weren’t what is expected of a racer with his talent and ability.
But, to his credit, he worked hard over the two-week gap between events, hit the Appin track with determination and raced with aggression and speed.

Long finished with a fourth in moto one and then a third in moto two to pile on 58 points and finish equal third for the day with Luke Clout fourth on a countback where the final moto breaks the tiebreaker. Still, it was an impressive performance by Long and one that he is more than capable of replicating at the coming rounds. Long now sits fourth in the championship.

“Today was a little more like me and the way I ride. The opening round was just awful and there was no way to hide from it. I went home with my tail between my legs and made sure I did the work for this weekend and went to the start line confident that I was prepared. My goal is to get on the podium so I was a bit short of that but I feel much better within myself about the way I raced and my ability. The plan now is to build from this and try an improve a little at each round.”

Brett Metcalfe and the team at Penrite Honda accept they need to find a solid race set up ahead of Round 3 of the MX Nationals held in Wonthaggi, Victoria.

“When the track has moisture we are fast but as it dries we lose race pace because of our setup, this is an area we need to focus on. We made some minor changes during practice and qualifying and we improved the bike considerably. I was really happy we took 1st in qualifying but it didn’t translate to race pace following further changes post qualifying. I was bummed to lose 2nd to Gibbs on the last lap in the last corner. I struggled during the race to maintain the speed of Ferris. I was pushing hard to stay with him and I was using a lot of energy.  We went the wrong way in moto 2, we made a call and it was wrong and the team and I realised that we need to continue testing. I am confident we have podium finishes but we need to find race pace and perfect our setups.”

There is now a two-week break in racing before the championship picks up at rounds three and four in a first for the MX Nationals where a double header, race weekend occurs in a massive event in the black loam of Wonthaggi. 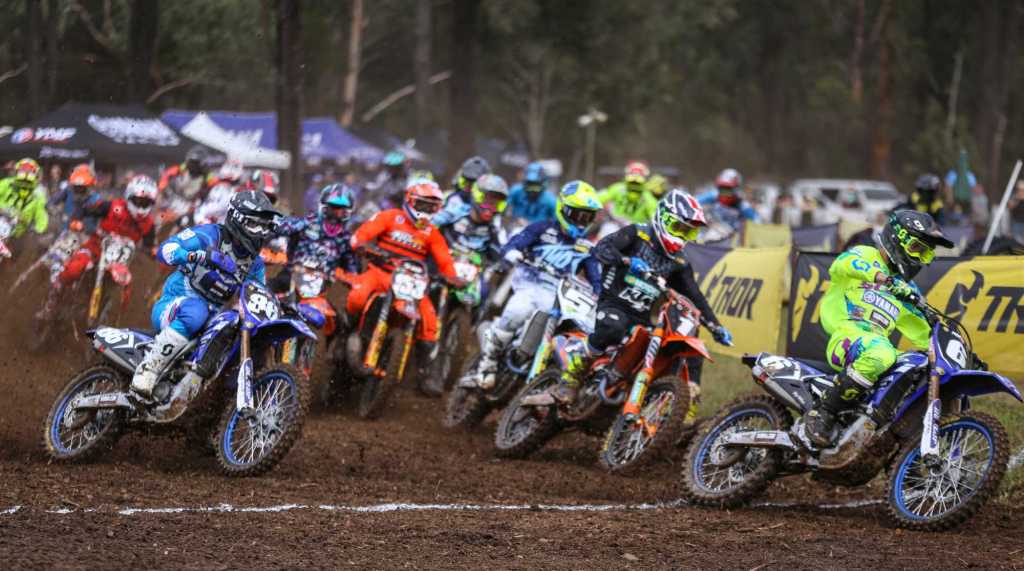 Serco Yamaha’s new recruit Nathan Crawford has stormed to the top of the Pirelli MX2 championship standings with an impressive double-moto victory around the hard-packed Appin circuit.

In the opening Pirelli MX2 race Crawford was in blistering form as he worked his way through the field to pass long-time race leader Wilson for the victory. Local racer Dylan Wills (DPH Motorsports Husqvarna) finished the moto in third, with Tanti fourth, narrowly ahead of CRF Penrite Honda Racing’s Jackson Richardson.

When the gates dropped on the second race of the day, Wilson again leapt to the front of the pack, but was soon dispatched by Crawford.

“The weekend was awesome for me and the Serco team. I felt strong on the bike all day and once I got into my flow in race one, I was able to make passes and get towards the front. I was able to keep doing the big step down out the back and that became a great passing opportunity for me where I could get alongside them or just jump pass them and I was able to use that to my advantage. That’s three race wins from the first four races and a great start to the championship. But the MX2 field is pretty deep this year and it’s not hard to ride well and be outside of the top five so it’s important to keep on doing what we are doing and finishing each moto in a good a position as possible.”

“The weekend went a little better for me and certainly a lot better than round one. It’s still not where I want or expect to be but I felt a lot better on the bike over the weekend and Appin is a track I have struggled with in the past so it was good to get a podium result and I can move forward to the next round. Round three and four are at Wonthaggi in Victoria and on a surface I prefer to ride on. We have a two week break before then so I will keep working hard and continue my improvement from round one.”

Husqvarna-mounted Riley Dukes has gained a slender upper-hand in the Motul MXD class at Appin’s second round of the Pirelli MX Nationals, with a brace of consistent second-place finishes seeing him take over the championship lead.

In the opening Motul MXD race McKay crossed the line three seconds ahead of Dukes, with Penrite Honda Racing’s Callum Norton third, narrowly ahead of Brodie Ellis (Yamaha) and Fogarty.

Fogarty made amends in the second race, finishing two seconds ahead of Dukes around the rough circuit, with Rhys Budd (Red Ride Honda) rounding out the podium. After a captivating battle, Bailey Malkiewicz (Bulk Nutrients WBR Yamaha) and McKay claimed fourth and fifth respectively.

Western Australia’s Regan Duffy (KTM) put the rest of the Rising Star Rookies field to the sword with huge leads in both races to claim victory from Dante Hyam (Honda) and Blake Fox (KTM) at Appin.

After qualifying 1.7 seconds faster than anyone, Duffy stretched out leads of more than 22 seconds in both motos, leaving the rest of the pack to fight for the minor placings.

In the first Yamaha Rising Star Rookies race, Fox and Hyam beat Jai Walker (Husqvarna) and Alex Larwood (Yamaha) for the podium positions. In their second outing Hyam and Korey McMahon (KTM) claimed second and third respectively, with Fox then leading Walker across the finish line.