Anthony West crashes out of the weekend

Michael van der Mark (Pata Yamaha Official WorldSBK Team) started out in his home country return in style with the best lap on Friday, as the MOTUL FIM Superbike World Championship warms up for a thrilling weekend of racing at the legendary TT Assen Circuit.

The Dutch rider has made it clear that he is at Assen to win, and the Free Practice 3 was a good start to that promise. After a promising FP1, van der Mark didn’t improve on his best lap all through FP2 and best part of the third session. But with less than three minutes to go he recorded a scintillating run, a quarter of a second faster than Marco Melandri (Aruba.it Racing – Ducati), who slowly progressed his positions throughout the day before finishing second.

“I am really happy with today, I enjoyed it and the team and bike worked well! We started this morning with a very good feeling, we had some small areas we needed to improve, so I was quite happy with my R1 from the start. Then in the second session, we tried to solve a slight grip issue I was having and we found quite a good solution but we decided to use only a hard tyre to see if we could make it work, so, the second session wasn’t really the best one. Anyway, we knew we would have some new tyres in FP3 so I did a long run and felt okay. I was losing a bit of time in some areas but towards the end of the long run, we managed to improve it with some adjustments. Then we went for a hot lap and I was really surprised with the time and I am really happy to finish Friday in first position.”

“Today we got off to a solid start, both myself and the crew. We focused our work to improve stability on the straight. On Friday, this is often not a problem but, if I do a longer run – like in FP3, when we did 10 consecutive laps – the wobbling becomes a bit more apparent. We sure hope this is not the case tomorrow. If anything, with these warmer temperatures, it will be easier to manage the tires over race distance.”

Michael Ruben Rinaldi (Aruba.it Racing – Junior Team) roared straight into his first Superpole 2 in only his second WorldSBK round, with the third best lap of the combined sessions. Rinaldi overcame a weaker first sector to record the then-best time of the day over Jonathan Rea (Kawasaki Racing Team WorldSBK), who had previously dominated both early sessions and most of the third.

“I’m quite happy with today’s results. We learned a lot from Aragon, and we planned our work more efficiently. We’re trying not to waste any energy, making the most of every single lap. Today we progressively found a good setup and then I pushed hard in FP3 to finish third. We want to move forward on this path.”

Rea, who rode more laps than anyone today on the Assen track, came in fourth, unable to improve on his best lap from FP2. His teammate Tom Sykes (Kawasaki Racing Team), second in FP2, also had to settle for his time from the second session, ending the day in sixth. Between the two was Alex Lowes (Pata Yamaha Official WorldSBK), in fifth.

“We worked in FP1 just getting up to speed and understanding the bike. There are just a few areas where we need to improve, especially in turning. We made two different set-ups and did two long runs; in FP2 and FP3 with different tyre combinations, to add to our understanding, so we are well equipped with information for tomorrow. We understand the race tyre set-up but now we can improve the bike a little bit more with the knowledge we gained today.”

“It was a tough day but with some positives to take. We are still haven’t found the overall setup I need and, to be honest, I didn’t feel very comfortable riding the bike. In my long run, I had a quite a few big problems. We spent all day until the last session on hard tyres so, maybe, we need to adjust the bike a bit for the soft tyres but, from how I felt on the bike, I imagine we can improve the bike quite a lot for tomorrow, so we should be in a decent position because the pace wasn’t so bad. It is clear we need to improve and I have done everything today to give the guys enough information. If they can make me feel a bit more comfortable on the bike then I think we can be quite competitive.”

“I really enjoyed Friday and the progression has been really good. We improved in every session and finally we ended up very strong and consistent and I was happy with our overall race consistency. Our best lap and our 16th lap were very close and consistent and I am enjoying riding the Ninja ZX-10RR. The feedback today has been very nice. With the hotter conditions the front and rear tyres are working and moving quite a lot but they are giving me good feedback. I am able to respond and use this to the best potential.”

Xavi Fores (Barni Racing Team) overcame his retirement in Aragon with a controlled final practice session, with the seventh best time overall. Just behind him was Chaz Davies (Aruba.it Racing – Ducati), out of the Superpole 2 positions for long stretches of FP3 but who ended up qualifying comfortably with the eighth fastest lap.

“We worked methodically to improve the setup but we’re still looking for the next step forward as we still need a few tenths. In particular, we are trying to improve turning and edge grip, which also affects acceleration in some parts of the track. We made a big change between FP2 and FP3, which worked under some aspects, so we just need to put all the pieces of the puzzle together ahead of FP4 tomorrow.”

The fight for the final two positions in tomorrow’s Superpole 2 was fierce, with Lorenzo Savadori (Milwaukee Aprilia) making use of the Aprilia’s pace to creep in ninth, as the final rider under 1’36. The battle for tenth was won by Jordi Torres (MV Agusta Reparto Corse), who, while unable to run faster in FP3, made good use of his FP2 time (fifth-best in that session), just ahead of Loris Baz (GULF Althea BMW Racing Team) and Toprak Razgatlioglu (Kawasaki Puccetti Racing).

The Swiss rider, 11th in the Pirelli Aragon Round, kept the lead throughout FP2 ahead of Aragon winner Sandro Cortese (Kallio Racing), who came in second by just three hundredths of a second. Joining them at the top was Jules Cluzel (NRT), coming in third after his first podium-finish of the season last weekend.

Behind him, Luke Stapleford (Profile Racing) improved on his FP1 time to make it in in fourth position, followed by Raffaele De Rosa (MV Agusta Reparto Corse by Vamag) and Federico Caricasulo (GRT Yamaha Official WorldSSP Team). Championship leader Lucas Mahias (GRT Yamaha Official WorldSSP Team), fifth in FP1, could only make it through in seventh after having his final lap deleted.

Anthony West (EAB antwest Racing) suffered an accident during FP1, and was declared unfit for the weekend after being examined at a local medical centre. A broken wrist for the Australian along with some other injuries.

WorldSSP Championship Standings after Round 3

Kawasaki’s Scott Deroue was the quickest of the 300 Supersport riders on Friday ahead of KTM’s Meuffels.

Tommy Edwards was 16th in the highly competitive 40-strong field. 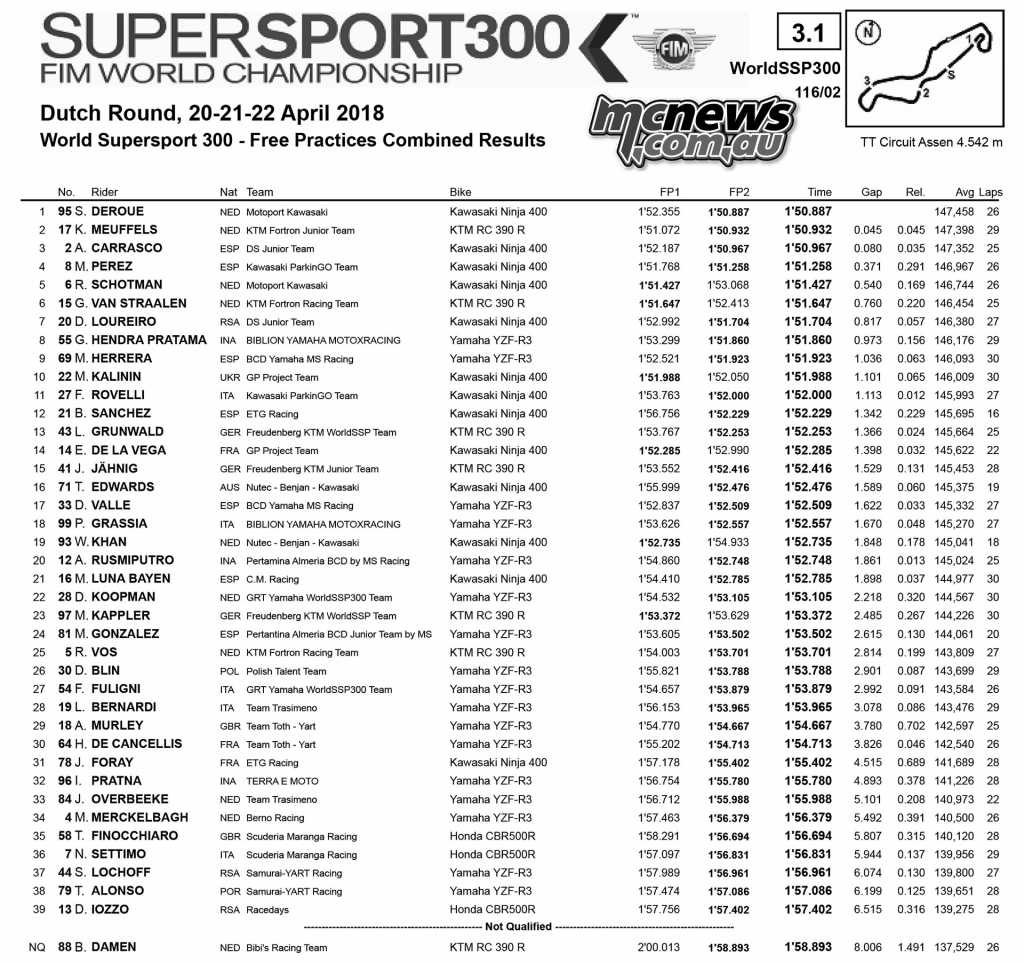 WorldSSP300 Championship Standings after Round 1