Data released today by the Federal Chamber of Automotive Industries (FCAI) revealed 62,898 motorcycles, ATVs and scooters were sold during the first nine months of 2019, compared with 68,460 for the same period in 2018.

This represents an 8.1 per cent decline for the market, with all market categories except scooters affected by the downturn.

Currently, Honda is the overall leader with a 23.1 per cent share of the national market, followed by Yamaha with 21 per cent and Kawasaki with 10.6 per cent.

Across the industry segments, Scooters defied the market trend, with a 14.5 per cent climb in sales during the first three quarters. Honda’s huge strides forward in the scooter segment means that Big Red now holds a 39.9 per cent share of the scooter market, followed by Vespa with 14.8 per cent and big improver Suzuki has now captured 14.4 per cent of the scooter market.

Off-road category sales fell 2.4 per cent compared with the same period in 2018. Yamaha now leads this segment with a 28.1 per cent share, followed by Honda with 27.4 per cent, and KTM with 18.8 per cent.

The Road segment fell by over 13 per cent. Harley-Davidson was the market leader with more than 19 per cent of the road motorcycle sales, followed by Honda and Yamaha who both had just under a 17 per cent share of the market.

Overall volume across all sectors (Brands)

The ATV/SSV category showed a decline of 11.3 per cent. Within this category, Polaris maintained market leadership with a 28.1 per cent share, followed by Honda with 22.5 per cent, and Yamaha with 19.3 per cent.

What about the other brands….?

It should be noted that some brands are not represented in the official audit figures in relation to motorcycle sales. Brands under the UMI group such as MV Agusta, Royal Enfield and Gas Gas, along with the likes of Sherco, CF Moto, Kymco and SWM which come under the stewardship of Mojo Motorcycles, are not included in the sales figures as these companies choose not to be members of the Federal Chamber of Automotive Industries.

An educated guesstimate suggests that these brands represent around 10-15 per cent of the whole market, thus the data is formulated from audited figures that cover around 85-90 per cent of the motorcycles sold in Australia.

Along with compiling motorcycles sales data, the FCAI is the primary organisation funded by the motorcycle industry to deal with government agencies. FCAI helped lobby for the Learner Approved Motorcycles Scheme and the Recreational Registration Scheme. They also lobby for exemptions on tightening emissions schemes in relation to motorcycles, and helping to prevent governments trying to restrict or ban the use of ATVs. 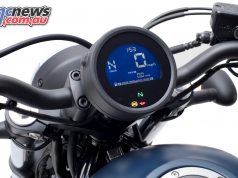