Defending champion Cooper Webb won the opening 450 Heat of the night over Dylan Ferrandis and Ken Roczen. Ferrandis ran Webb close at times but the KTM man proved quick enough to hold the Frenchman off.

Fourth place finisher Jason Anderson set the fastest lap of the race by far to underline his potential for the Main in front of what was a huge Daytona crowd.

Malcolm Stewart got a great start and went on to dominate his 450 Heat race ahead of Justin Barcia and Chase Sexton.

With five wins at Daytona under his belt Eli Tomac perhaps entered the Main as favourite.  If successful Tomac would overtake Ricky Carmichael, who as a fourth generation native Floridian had designed the lay-out and was the equal most successful rider ever at the iconic Daytona round of the AMA Supercross Championship, the two with five wins apiece.

Cooper Webb had other ideas though and scored the holeshot despite nearly losing the front as he pivoted at the first turn. Webb had clear air but Malcolm Stewart and Jason Anderson tussled early on in the opening lap which put them both well back in the pack.  Stewart handing out some retaliation for what happened last week, and then again at the second turn, Mookie put Anderson and himself on the ground.

Stewart and Anderson were outside the top ten due to their tussles and still racing each other for position.

All the while defending champ Cooper Webb had clear air and was running his own race.  With 15-minutes left on the clock Webb led Sexton by 1.5-seconds, and Tomac was equidistant in third.

Tomac took second place from Sexton with just over 11-minutes left but Webb now had three-seconds on the pair.  Once past the Honda man Eli Tomac pulled away and put his head down to try and reel in Webb.

At the halfway point Barcia was fourth, Ferrandis fifth, Musquin, sixth while Roczen was seventh with a handy buffer over the Stewart versus Anderson war.

As the race progressed Justin Barcia moved forward to challenge Sexton for that final step on the rostrum.

A better run through lapped traffic helped Tomac close in on Webb but the gap kept stretching back and forth depending on how each of them got baulked by lapped riders.

With three minutes remaining Tomac was eating plenty of KTM roost from Webb through the sand sections but he was within striking distance.  Then we saw wisps of smoke coming from Tomac’s YZ450F, could Tomac be robbed at the final hurdle by a mechanical failure?

Lapped traffic then allowed Tomac to jump straight past Webb as McElrath moved out of the way in response to blue flags but unintentionally moved straight into the path of Webb, and that was what decided the result.

Eli Tomac becomes the most successful rider ever at Daytona with a come from behind victory, his sixth at the venue.

Cooper Webb frustrated at losing his chance of victory by lapped traffic but still heading to Detroit with a healthy swag of points.

Chase Sexton claimed the final step on the podium ahead of Dylan Ferrandis and Justin Barcia.

Eli Tomac celebrated his victory with a burnout as a stream of coolant and steam poured from his Yamaha.

Tomac heads to Detroit with a 17-point buffer over Jason Anderson and a 33-point advantage over Cooper Webb.

After qualifying in second place behind Jett Lawrence, RJ Hampshire started out his night at Daytona on the right foot with victory in the opening 250 Heat race ahead of Jordon Smith and Arlington triple-header winner Cameron McAdoo.

Jett Lawrence completely dominated his heat race, lapping two-seconds quicker than the rest of the field on his way to a 5.4-second victory over Stilez Robertson and Pierce Brown.  The gap would have been much larger if he hadn’t thought the race had already finished when he slowed right up and started cruising with a lap still to go. 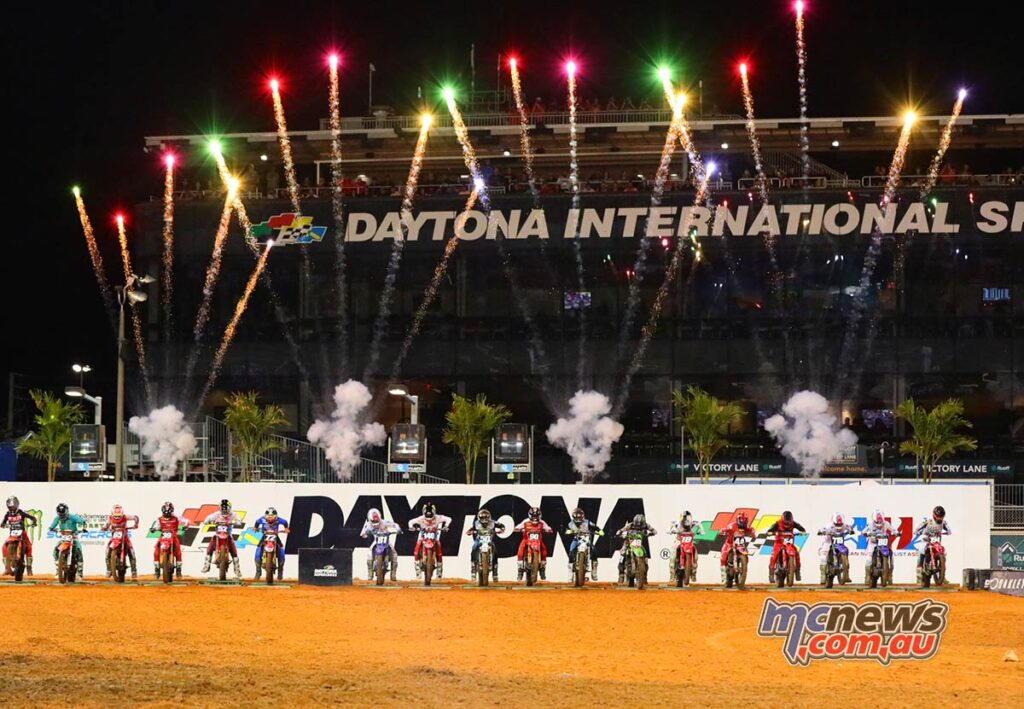 Jett Lawrence started well but Stilez Robertson had the line to claim the holeshot out of turn one. Lawrence though made short work of Robertson to move through to the race lead and immediately started to check out.  Joint series leader McAdoo was back in eighth at the end of lap one.

It was not until half race distance that Lawrence had more than four-seconds on Robertson, who in turn had ten-seconds on Lopes and Nicoletti.

A little further back Pierce Brown, Cameron McAdoo and RJ Hampshire were tussling over fifth. As the race wore on though that trio moved past Nicoletti and then moved in on Lopes to then starting battling for the final step on the podium.

With three-minutes left on the shot clock Lawrence was leading Robertson by eight-seconds, but Roberston still had ten-seconds in hand over the third place battle unfolding between Brown, McAdoo and Hampshire.  The latter of that trio though made a mistake in the final minute, stalling the bike and losing a number of positions before firing back into battle.

Pierce Brown claimed fourth ahead of Enzo Lopes and Jordon Smith while RJ Hampshire recovered from his mistake to claim seventh ahead of Phil Nicoletti and Mitch Oldenburg.

Jett celebrated his victory with a feet-up burnout in front of the fans before putting the front wheel against the wall to make more smoke.

With two wins from three starts thus far in the 250 East competition Jett takes a five-point lead over McAdoo to Detroit’s Ford Field next weekend.

Stilez Robertson’s second place moves him up to third place in the championship, a great result after coming back from some significant off-season injuries.