There were a few noteable names that had to contest the QP1 session here today at Phillip Island after failing to directly progress to Q2 on the back of their times from this morning.

A good crowd had built at Phillip Island throughout the day to see the combatants duel it out at 1450 on Saturday afternoon in Q1.

Troy Herfoss, Arthur Sissis and Aiden Wagner were the riders perhaps most expected to progress but Mark Chiodo was the early pacesetter at 1m33.651 and with five-minutes remaining in the 15-minute session the young Victorian remained atop the time-sheets by a handy margin and was sitting in pit-lane.

Troy Herfoss bided his time until almost the final juncture to try and progress and put in a good first split before the lap went away from him, he would have one more chance to crack out a good time or he would be starting from the sixth row of the grid.

Broc Pearson and Arthur Sissis were both under Chiodo’s benchmark through the first split on their final lap but then they both lost time in the second split and failed to best Chiodo, as did everyone else.

Mark Chiodo tops QP1 by a significant six-tenths over Broc Pearson and Arthur Sissis goes P3 to earn his promotion through to the Q2 final qualifying session.

A decent blustery wind was blowing across the Phillip Island circuit as 12 riders rolled out of the pits to contest the 15-minute Q2 session that would decide the grid for Sunday’s two 12-lap races.

The ambient temperature was hovering around the low-mid 20s while the track temperature was registering 37-degrees when the track went live exactly on schedule at 1515.  The wind was causing riders more than a few problems and taking a little confidence away.

First out of the pits were Lachlan Epis and Broc Pearson, hot on their heels were Bryan Staring, Matt Walters and Mike Jones. The last riders to leave pit-lane were Wayne Maxwell and Daniel Falzon. The latter of that pair not joining the circuit until six-minutes into the session.

Maxwell’s first serious lap was a 1m32.415 and he now had a clear track in front of him. His next lap was a 1m32.170 with eight-minutes remaining.  Second at this point was Bryan Staring, exactly a second behind Maxwell, while Lachlan Epis was third and Mike Jones fourth as the session reached its halfway point.

With five-minutes remaining all 12 riders were on track and Josh Waters had just followed Wayne Maxwell out of the pits.  Lachlan Epis went down at turn four while on a decent lap but was up and unhurt.

Broc Pearson was tucked in behind the DesmoSport Ducati of Bryan Staring to try and benefit from a tow around behind a faster and much more experienced rider.

Wayne Maxwell then put his head down again to drop almost a full-second off his earlier time, setting a new ASBK qualifying lap record at 1m31.363. The defending champ then backed that up with a 1m31.600. That is Wayne’s 14th Superbike pole position here at Phillip Island. 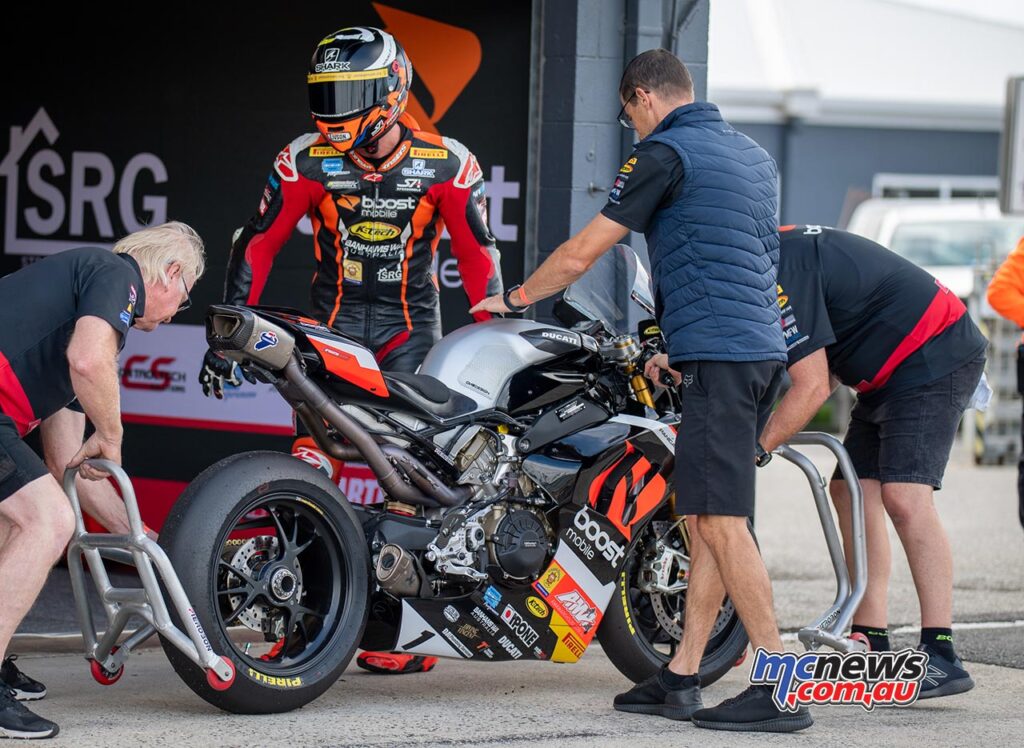 Cru Halliday had left it until late in the session to really get wound up and leapt up the leader board to P2 with a minute remaining after recording a 1m32.803 and that was good enough to hold on to that second spot on the grid while Josh Waters rounds out the front row.

Mike Jones heads row two ahead of Bryan Staring and Daniel Falzon. The South Australian would be more than happy with that considering his lack of preparation ahead of this round and the fact that he is still struggling to move around the bike properly.

Lachlan Epis starts from P7 while starting alongside him on that third row will be Broc Pearson and Glenn Allerton. Matt Walters rounds out the top ten ahead of Arthur Sissis. 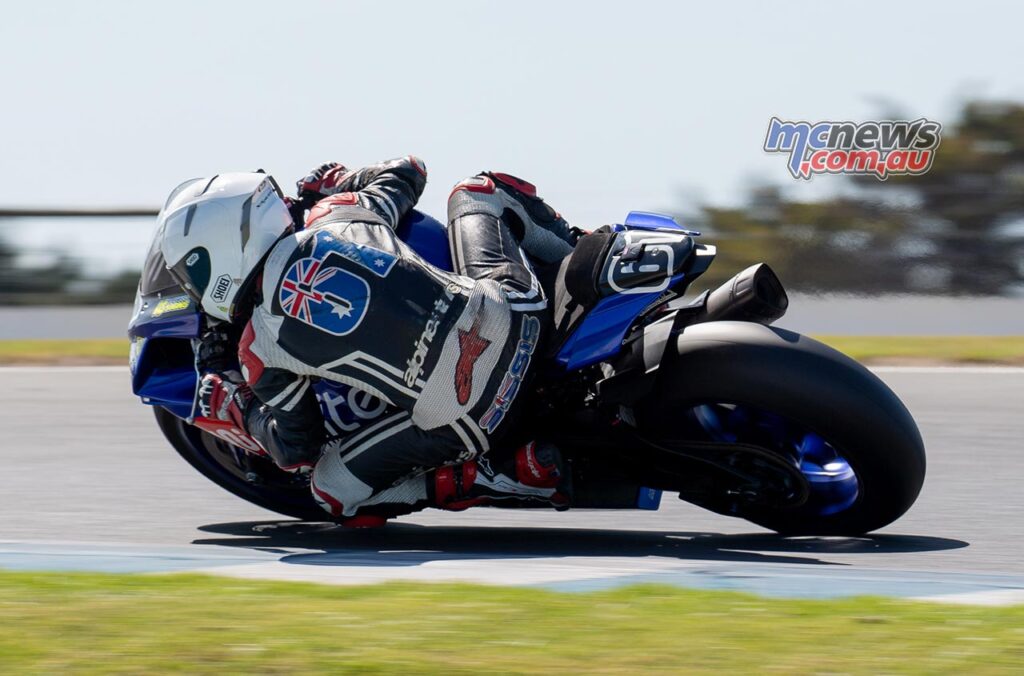 For passionate ASBK fans who don’t want to miss a minute of the race-day action, Sunday kicks off with live streaming from 10 am on both the asbk.com.au website and Facebook page.  At 1 pm switch over to either SBS or Stan Sport for the official race day broadcast of the major categories.  At 4 pm, the livestream (on asbk.com.au and Facebook) will resume for the remainder of Sunday’s races.

“Yesterday morning we came out of the box quite strong off a good base setting. Surprised myself yesterday morning with that pace but that was the best conditions we have had so far this weekend. Today though I had to throw caution to the wind, literally, and it all came together.  There was nothing left in that as I put it all out there in those conditions but tomorrow is going to be a totally different story.”

“I probably left my run a little late, I really struggled in the wind, and I have no idea how Wayne did that time in those conditions. Disappointed to be nowhere near as fast as I was on Friday but I had that little tumble at turn four which perhaps took a little bit of confidence away.  I will jump on Wayne as fast as I can tomorrow but it is easier said than done, I could run with him here in 2020 but couldn’t get past him but has even more pace now.”

“My aim was to try and get on the front two rows so happy to achieve that with such limited time on the bike. I think I ride a bit different to the previous riders Shane has had on his bikes so I am taking the development of my bike in a slightly different direction. The wind really affected our bike today and there was some serous ‘oh my god’ moments out there.  Tomorrow is going to be hard as there are a few different guys out there that have been going about the same pace as I of. There are things we can keep improving, I was all the suspension travel today so hopefully we can improve our set-up and go faster again tomorrow.”

The 1m35.307 set by Senna Agius in the second qualifying session proved good enough for pole after Tom Edwards went down at turn six on his fast lap but is expected to be able to race on Sunday.  The fastest lap of the weekend though remains the 1m34.9 set by Edwards on Friday.  Tom Bramich rounds out the front row but has some speed to find if he is going to challenge Edwards and Agius in tomorrow’s ten-lap encounters.

In the Supersport 300 category it was Glenn Nelson setting the pace this afternoon with a 1m49.428 earning him pole position ahead of James Jacobs, Henry Snell and Cameron Dunker.

The opening R3 Cup race saw Glenn Nelson get away well from pole but an incident at turn two brought out the red flag after Jamie Port went down.

After a short delay proceedings got underway again and immediately Glenn Nelson and Henry Snell were tussling and swapping positions at the head of the field but Taiyo Aksu moved into their tow down the chute which helped propel him into the lead by turn one.

Nelson moved back into the lead around the back of the circuit while Brodie Gawith, Cameron Dunker and Brandon Demmery joined that leading trio to throw things wide open.

With three laps to run the top seven were covered by less than a second and you couldn’t keep up with who was there due to the order being shuffled at every turn.

Getting to the flag first though was young Varis Fleming in a finish that was incredibly close. The top ten covered by less than three-tenths….  Glenn Nelson getting the nod for second while Jonathan Nahlous rounded out the podium.

Race Direction though docked Varis Fleming a position in the final wash-up which promoted Glenn Nelson to P1 along with the 25-points that came with it to open his championship points account in the best possible way.

The opening Oceania Junior Cup race for season 2022 got underway in windy conditions at 1542 on Saturday afternoon at Phillip Island.

Cameron Rende had his nose ahead at the flag to take the victory ahead of Hudson Thompson and Harrison Watts rounded out the podium.

Scott Campbell got away well on the RC30 to lead the field around the most of lap one but by the time they crossed the stripe to start lap two Corey Forde had took the lead on the big-bore 1260 cc XR69 Suzuki.

Murray Clark was third at this early juncture and that trio had already started the gap the rest of the field.  Corey Forde though was given a ten-second jump-start penalty and thus his pursuers could simply follow him home and still claim the win.

That didn’t happen though as Forde rolled to a stop at turn 12 after a couple of laps handing the lead over to Scott Campbell.

Not to be outdone Murray Clark chased down Scott Campbell for the overall win.

Scott Campbell got away well in the second Superbike Masters bout of the day but the red flag came out early on in the race due to oil on the circuit after a rider rolled to a stop at turn two.

There was a length delay for the oil to be cleaned up before the action got underway again and it was Scott Campbell with the holeshot on the RC30 once again.

Murray Clark shadowed Campbell throughout the five-lap distance and closed right onto the tail of the RC30 over the course of the final lap before using his extra horsepower to pass the RC30 down the chute to take the race victory by less than a tenth.  John Allen rounded out the podium almost ten-seconds behind that duo.