Gets the new electronics kit and engine that the MT-09 scored this year plus new frame, instruments and styling

by Trev
in Yamaha, Yamaha News
A A
Share on FacebookShare on TwitterShare

Yamaha’s affordable triple-cylinder retro bike, the XSR900, has undergone its first major work-over since its inception five years ago.

Now it is even more back to the future with a new Deltabox-style frame that brings up images of the FZR models from the 1980s. If it was finished in silver it would be even more pukka, but the all-new-old frame on the 2022 XSR900 is finished in black and has no visible welds.  That’s because this frame is die-cast using Yamaha’s latest Controlled Filling (CF) technology that accurately controls a number of factors including mould vacuum, temperature and injection speed.

The frame utilises sections of different thicknesses so that the rigidity level is designed to match the varying loads experienced at any specific area. Wall thickness varies from 1.7 mm at its thinnest to 3.5 mm at its thickest, and this ‘tuned rigidity’ is claimed to offer excellent feel and feedback to the rider, giving the XSR900 a sporty and responsive handling character.

The headstock is 30 mm lower and the swing-arm is both straighter and 50 mm longer while overall torsional rigidity is significantly increased.  While the previous model used a swingarm that pivots on the outside of the frame, the new bike uses a swingarm pivot that is held between the outer chassis members – an improved design that is slimmer and more rigid than before.

The sub-frame is also new and the new 80s inspired 15-litre fuel tank is a lot more 80s-90s in its shape and has air intakes at the front to not only help efficiency but also give the rider more intake roar, something the triple has never been short of in the first place.  The XSR900’s new exhaust features unequal length headers and dual-sided outlets

The rider’s bum appears to be positioned a little lower and more rearward. Yamaha claim a 14 per cent reduction in inertia around the steering axis.

The new XSR900 also inherits the latest iteration of Yamaha’s fizzing CP3 powerplant and coming with that is an increase in capacity from 847 cc to 889 cc.  Compared to the previous engine the new unit features a 3 mm longer stroke to provide that extra 43cc, and virtually all of the major internal components have been redesigned and lightened.

These changes give a four horsepower increase in power which is now up to 117 horsepower at 10,000 rpm. More significantly the torque produced by this engine – already renowned for its strong and linear output – increases significantly to 93 Nm. This represents an increase of 6% per cent in torque, and it is achieved by 7,000 rpm – 1,500 rpm lower than the previous model.

The clutch has a slipper function and has different friction plates to better handle the increased torque but effort at the lever is actually reduced as the clutch is of the slip-assist type. The six-speed gearbox has slightly higher gear ratios – with 1st gear going from 2.666->2.571, and 2nd gear going from 2.000->1.947. These changes are designed to complement the increased moment of inertia of the crankshaft and the revised characteristics of the fuel injection system. A two-way quick-shifter is also fitted.

An endearing characteristic of the original XSR900, the round headlight, has been continued but now has full LED functionality. As well as providing a strong beam of light with a wide horizontal pattern for cornering vision at night, the new LED unit allows the use of a much shorter housing located by brushed aluminium headlight stays.

The XSR900 also comes fitted with a partially LED tail-light located beneath the seat hump which sharpens the rear silhouette of the bike and mimics the tail-lights seen on 80s and 90s endurance racers.

The cockpit is enhanced with a machined top triple clamp, drilled fork caps and an aluminium XSR logo. Other features include an embossed aluminium rear under-plate, black brake reservoirs and bar end mirrors.

At the heart of XSR900’s new systems is a 6-axis Inertial Measurement Unit (IMU) that uses two sensors to measure three-axis velocity and three-axis acceleration. This new unit is 50 per cent  smaller and 40 per cent lighter than the original 2015 YZF-R1 design, and it sends data to the ECU that inform the three rider aids: Lean Sensitive Traction Control System, Slide Control System (SCS) and the front Wheel Lift Control System (LIF). 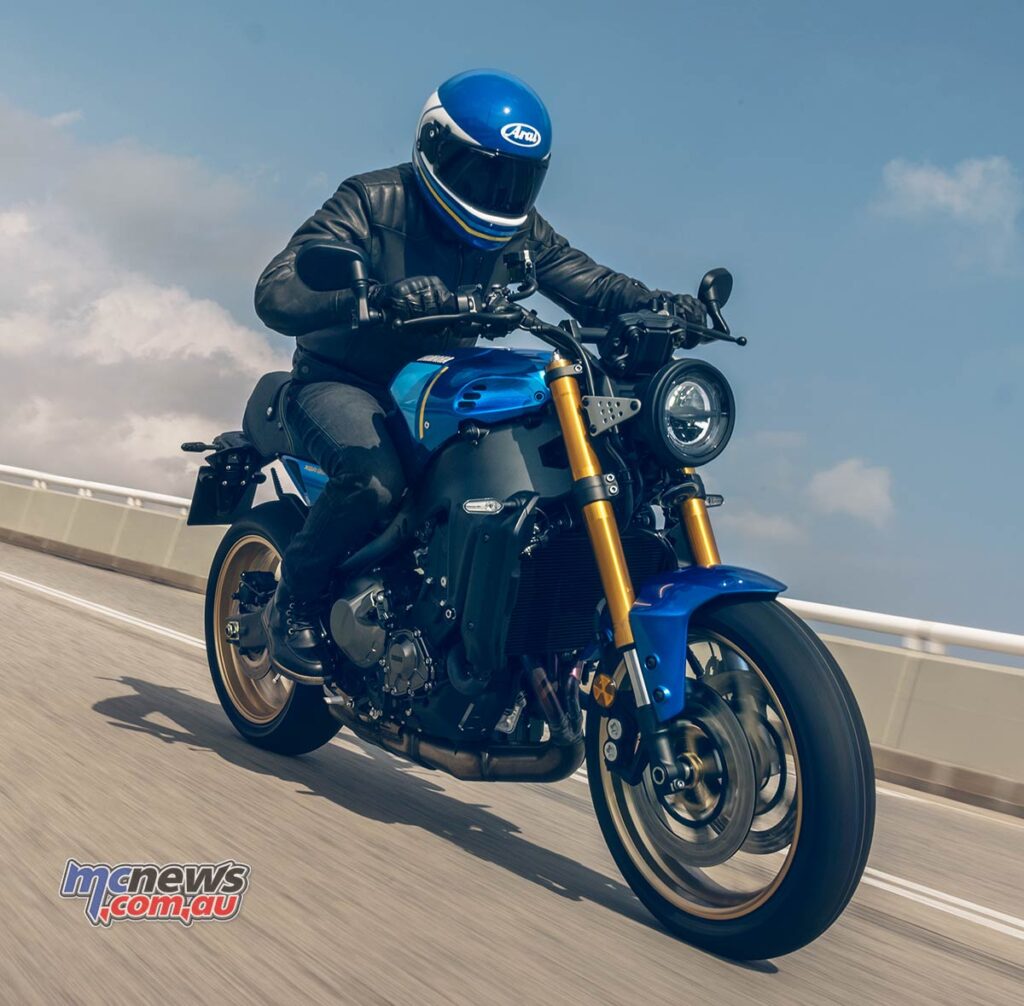 The degree of intervention of the Traction Control System is calculated by the IMU relative to the degree of lean, and the rider can select one of three intervention modes or turn the system off completely.

The Slide Control System (SCS) is a valuable asset. When a sideways rear wheel slide is predicted by the IMU, power is adjusted in order to maintain traction. As with TCS there are three intervention levels, as well as an off switch.

LIF is an anti-wheelie system that helps to smooth out machine behaviour when pulling away or accelerating hard, LIF is designed to work in harmony with the other electronic control systems.

The XSR900’s Brake Control system independently controls and moderates the front and rear brake pressure to prevent accidental wheel lock ups. BC1 is a standard type of ABS mode that activates in upright emergency stopping situations, while BC2 is designed to maintain control if emergency braking is applied when the XSR900 is leaning in mid corner.

The new XSR900 features four D-Mode engine power modes, compared to three on the previous model. Mode 1 is the most aggressive full-power mode, while modes 2, 3 and 4 deliver progressively softer degrees of response to suit riding conditions.

While the previous XSR900 was fitted with a Yamaha Chip Controlled Throttle (YCC-T) the new model takes the technology one step further with the addition of an R1-type Acceleration Position Sensor Grip (APSG). This is a full “ride by wire” system with a sensor in the twist grip that replicates the traditional feeling of the throttle spring, and eliminates the need for any cables.

While the overall aesthetic is distinctly retro there are no 80s style clocks adorning the cockpit of the XSR900.  Replacing the previous model’s circular LED is a 3.5-inch full colour TFT.

Cruise control is also fitted to the XSR900 for the first time.

Australian stocks are not expected to arrive until at least the end of the first quarter of 2022 and Yamaha are expected to confirm local pricing later this month. The current XSR900 sells for $15,449 Ride Away.

Troy Herfoss will race this weekend at The Bend ASBK finale