As the championship pays tribute to its 22 450SX Class Champions during the 40th Anniversary Celebration race of the Monster Energy AMA Supercross, an FIM World Championship, Villopoto will showcase to his constituents the evolution of the sport over the past 40 years.

“It feels great to get a win this early,” said Villopoto. “We made some really good changes going into Phoenix and we’re excited to carry those into Anaheim. We’ve got the points lead and the red plates back, but that doesn’t mean we can stop working hard to continue improving.”

Red Bull KTM’s Ryan Dungey is the only rider in the field to have graced the podium at the first two races, finishing second and third respectively.

“I’m looking forward to Anaheim this weekend,” said Dungey. “The team had good results at the opening round at Angel Stadium earlier in the month so we’ll be trying to replicate that again this week. Plus, it’s the 40th anniversary of supercross so there should be great atmosphere which will make the event even more fun.”

After winning the opening race of the season, Red Bull KTM’s Ken Roczen came into Phoenix with the points lead but finished sixth and dropped to third in the season point standings.

“This weekend in Anaheim should be a good race,” said Roczen. “I’m sure there will be lots of past champions present and we have many KTM Racing members from Austria coming to watch with it being the 40th anniversary and all. It would be nice to take the win in front of some of the biggest names in the sport.”

“Going to Angel Stadium is always exciting,” said Weimer. “We made some progression last weekend and got a Heat Race win, now we need to transfer that to the Main Event. The track looks fun and hopefully provides some good racing.”

Yoshimura Suzuki Factory Racing’s James Stewart bounced back in a big way from his crash at the season opener to turn in a first-class performance in Phoenix. Although the Yoshimura Suzuki rider was feeling under the weather, Stewart stepped it up for the Main Event and raced his Yoshimura Suzuki RM-Z450 to an impressive fourth-place result and moved into the top-10 in season standings.

“I’ve had some good luck at Phoenix in the past,” said Stewart, one of only two riders to win in both the 450 and 250 classes at this venue. “So Phoenix has been pretty good to me overall this year.”

That said, Stewart still wasn’t 100 percent going into the evening’s racing. And to add insult to injury, a get-off in practice resulted in mechanic Rene Zapata having to completely rebuild his bike prior to the Heat Race. However, Stewart still managed to finish fourth and transfer to the Main Event. Feeling admittedly fatigued at the start of the 20-lap main, Stewart struggled off the gate, but he put his head down and charged through the field. Carefully sizing up the competition and then picking them off one by one, Stewart worked his way into fourth place and held on to the checkers.

“Overall it was a long day,” said Stewart. “On Thursday, I was out testing and started feeling bad. Saturday was probably the worst I’ve felt. On top of being sick, I didn’t get a good start in the Main Event. I literally could’ve fallen over on the gate, I was so tired and weak. But we ended up fourth, and I feel good about that. Considering how bad I felt, to still get a top five was nice. And I’m glad to walk out of Phoenix with some valuable points. I knew two bad weekends in a row wouldn’t be good for any title hopes, so I did what I had to do. I’ve also got to give it up to the Yoshimura Suzuki team for believing in me and fighting through it. Now, I’m going to go back and rest up and be ready for Anaheim. They’re celebrating the 40th Anniversary of supercross at that race, and it should be cool to race in front of all those past champions.”

“I’m really bummed with how tonight went,” said Barcia after the Main Event. “I felt good all day and put myself in a good position at the start of the main, but I just rode too aggressive in the beginning and kept making mistakes. Once I made those mistakes I got tight and wasn’t riding as well. The bike was working awesome, so it’s all on me. I definitely have to think about this race all week, and go into Anaheim prepared. This weekend’s Anaheim race should be really awesome with the throwback theme to celebrate supercross’ 40th anniversary. I’m excited to check out the replica track and hopefully can get my CRF450 on top of the podium.”

“Coming out of Phoenix I was obviously disappointed with a ninth, but it is what it is, and we’ve learned from our mistakes,” said Chad Reed. “We will continue to move forward. For me I feel like the first two races felt similar, but we had very different results. It all comes down to a good start and putting myself in a good position. We did that at the season opener, but not the second race [at Phoenix]. Coming into Anaheim this weekend, we’re looking forward to getting back on the podium, challenge for a win and riding more to my potential.”

As one of the 22 champions to be recognized tomorrow night, Reed looks forward to spending the day with the legends that he looked up to as a kid.

“It is cool with this race being the 40th anniversary race,” said Reed. “We are going to be surrounded by a lot of great champions. I’ve been fortunate to win two and still be around kicking to try for a third, so it should be a fun weekend! A lot of them are heroes that I looked up to as a kid. It will be fun to fan-out a little and get to hang out with some of the riders who have all dreamed big like I have.”

Former two-time 250SX Class champion Ivan Tedesco was called out of retirement to fill in for an injured Davi Millsaps heading into the season opener. He qualified for the Main Event in Anaheim and finished 22nd. In Phoenix, he improved his finish by 10 places, earning 12th.

“Today was a lot better,” said Tedesco after the Main Event in Phoenix. “A lot better than last weekend [in Anaheim]. In practice I qualified 14th and I was 22nd in Anaheim. I am improving every week; in the Main Event I ended up 12th. I got a little tired but I expected that because I have only been working on my fitness for the past month. I’m going to keep working at it, building [each week] and hopefully get better.”

Not to be overshadowed by Villopoto’s dominance, Western Regional 250SX Class points leader Jason Anderson, who rides for the Rockstar Energy Racing team, is making a name for himself, winning the last three of four races he’s competed in dating back to Salt Lake City in 2013, the location of his first win. In his first two wins of the season, Anderson used last-lap passes on Cole Seely, who rides for the Troy Lee Designs/Lucas Oil/Honda team, to win the Main Event. Anderson heads into this weekend six points ahead of Seely.

“You know what I’m going to say, huh?” said Anderson after Saturday night’s race in Phoenix. “That I only lost first practice! (laughs) Today was good. I had good practice times and had a good Heat Race. I struggled with one rhythm section pretty bad but made it work in the main. It definitely made things interesting. I made another last lap pass, which was exciting.”

Seely who was poised for the win once again, made a small mistake on the final lap to finish second overall.

“I’m bummed,” said Seely after the race in Phoenix. “I’ve been battling stomach issues all week, so was struggling with that. I felt [my stomach] tighten up late in the race, and I just made a mistake and Jason [Anderson] got me again.”

Monster Energy/Pro Circuit Kawasaki’s Dean Wilson, who started the season with an injury, finished fourth in the first two races and hopes to turn things around this weekend and pick up his first win of the season.

“It’s important for us to stay focused,” said Wilson. “We’re two rounds in and although we haven’t had the finishes we wanted, we are still in a good place. Hopefully we turn things around in Anaheim.”

“I’m coming into Anaheim the same as I have the last two races,” said Hill. “We’ve been working hard during the week but have yet to show it in the mains. I’ve made a few mistakes and I think without those we’d be in a much better place. I’m ready.”

With one career win under his belt, Monster Energy/Pro Circuit Kawasaki rider Darryn Durham has yet to make his way to the podium with a seventh in Anaheim and a 14th in Phoenix.

“I’ve learned a lot over these two races,” said Durham. “It’s taken me longer than I wanted to get into the groove but I’m feeling more confident and will be looking for a better result this weekend.”

Despite a mid-pack start, GEICO Honda’s Wil Hahn made quick work on correcting his early mistake as he finished 10th. Phoenix marked the third 450SX Class top-10 finish for Hahn who is a rookie in the class.

“Right now it’s all on me,” said Hahn. “I’m getting used to the bike and the competition, and I need to get my head in it a little more. My starts need to get better, but it’s more about believing in myself and riding like I know how to ride.”

Former 250SX Class champion Eli Tomac was hoping to make a smooth transition to the premier class this season, but an injury at the season opener has forced the GEICO Honda rider to miss the first two races. All signs point to Tomac missing this weekend’s race in an effort to heal the injury.

“I was hoping to be able to ride tonight to earn some points but after trying to ride first practice, there was no way,” explained Tomac. “I need to let this thing heal fully before coming back to race, so I won’t be doing Anaheim [this weekend].”

For the second consecutive week, Muscle Milk- supported GEICO Honda rider Zach Osborne, who rides for the GEICO Honda team, matched his third place at the season opener in Phoenix, marking the first time in his career where he’s finished third in consecutive races.

“Reaching the podium is good and I’m happy to get the points, but at the same time, I’m not going to be content with third-place finishes,” Osborne said. “I need to be up front with [Jason] Anderson and [Cole] Seely. I can run the pace, my fitness is there; I just need better starts. I’m just not putting myself in the right position to challenge for the win.”

Canadian superstar Cole Thompson, who is a rookie for the Rockstar Energy Racing team, didn’t qualify for the Main Event but looks to learn from his experience at Phoenix.

“I learned so much this weekend and made good improvements throughout the day,” said Thompson. “I just need to get more comfortable racing again. Thanks to my team for helping me to improve and working hard to give me an awesome bike. I’m looking forward to getting ready for Anaheim.” 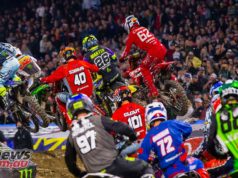 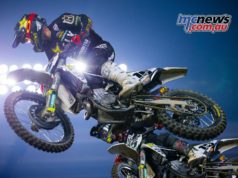 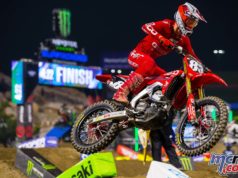