For the first time in recent ASBK history, a five-way tyre manufacturer war is set to light up the 2020 mi-bike Motorcycle Insurance Australian Superbike Championship, presented by Motul.

Pirelli have been dominating the ASBK paddock for the past few years and have clearly set their sights on Dunlop, Bridgestone, Michelin and Shinko, who will all compete for supremacy in the ASBK paddock in the rubber war, which is set to add another element to the 2020 championship.

New kid on the block – Michelin – have called in a big gun of the sport with Jeremy Burgess – former crew chief to Wayne Gardner, Mick Doohan, and Valentino Rossi – to be Michelin’s expert technician in the pitlane this year.

At the recent Pre-Season Official ASBK Test at Phillip Island Grand Prix Circuit, several riders had changed not only teams and bike manufacturers, but also tyre brands, meaning there was a whole new learning curve to get their head around.

After burning off their Christmas pudding, the top 11 Superbike riders were covered by two seconds, and the top five by less than one second, running Pirelli, Dunlop and Michelin tyres during the 2020 Kawasaki Superbike Class test.

But it is the YMI Supersport 300 and YMF R3 Cup class where all tyre manufacturers will go head to head, with all five manufacturers vying for top place amongst riders, teams and on the podium.

Some riders may even choose to do a repeat of last year where some mixed front and rear tyre brand combinations gained what they felt was the greatest advantage.

Good race results, and a championship win, can produce a massive shift in tyre sales, but also allow the Australian tyre suppliers to influence parent companies to invest more in tyre development for the ASBK. The tyre war – while friendly at the moment – will heat up and could “boil over”, as the season progresses.

All manufacturers agree, the tyre competition is great for the 2020 ASBK and is further evidence of the recent growth and strength of the championship.

Can Josh Waters get the flow back on course at Hidden Valley?

ASBK tyre war heating up ahead of the Battle of Darwin

“I think 2020 will be similar to 2019 with a very tight series, a lot of riders and bikes with new tyre combinations and I certainly think it will make an exciting series in all classes. I think it (the tyre war) will give ASBK a new dynamic based on results from the Official ASBK test at Phillip Island in January and obviously the main three brands in Superbike are very close, and it will be a hard-fought battle. And in the 600s and 300s I think it will also be tight as well between the brands. We are all competitive, it’s part of the DNA in racing, whether its motorcycle riding, tyre company, oil company, we all want to win. The main thing we want to see is tight competition in all three classes, top, good, hard, tight racing that’s what I want to see and that’s what Pirelli wants, and that’s what spectators want to see.” 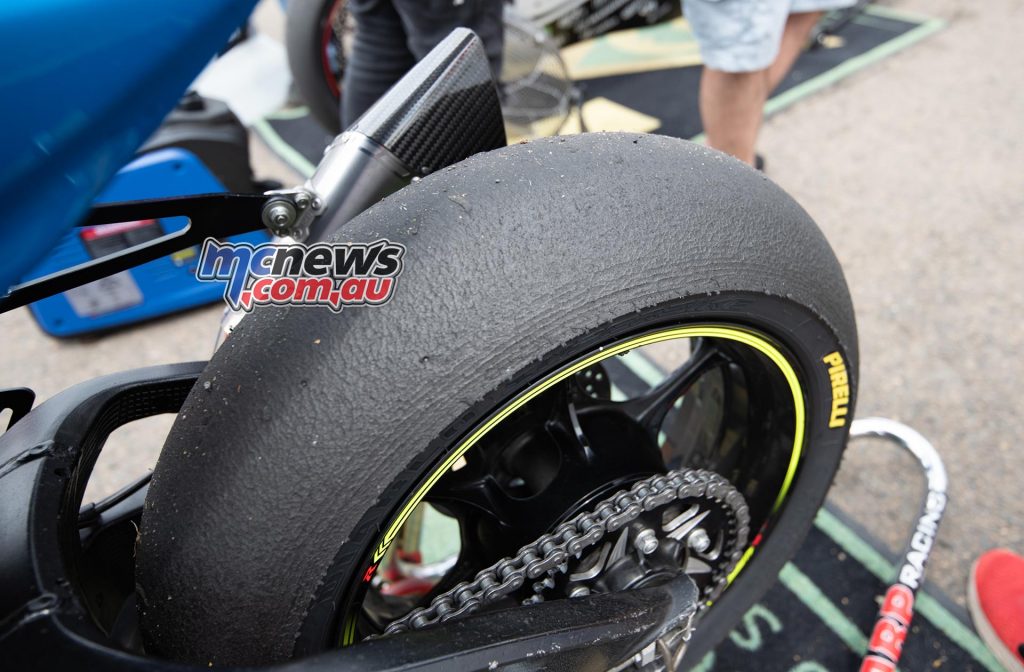 Garry Crilly said the main advantage for Pirelli ASBK riders was that the tyre technology it produced is fed down from World Superbikes.

“Our Superbikes are different to the worlds, but we have the same basic characteristics and I think Pirelli have tyres that suit multiple brands, and riders can adapt easily to our tyre on any given motorcycle. Wayne Maxwell is a perfect example of that. I think we’ve got a range of tyres in each class that can run and be used at any of the circuits we visit throughout the season.”

“Obviously, it’s been quite some time since Michelin have been in the championship and Pirelli are obviously strong, but we feel we’ve put together the best range possible for our circuits and conditions and we are really confident with our new range. We’ve got all the pieces of the puzzle to go up against the other brands and I’m really looking forward to it. It’s great for the championship, it will really intensify and could boil over in 2020. We have some guys in the 300s on the brand-new tyre that we’ve put forward for homologation and it will be interesting to see how that plays out. Again, Pirelli are really strong in that sector, but we also believe we have the answer to that and in Supersport we have been involved in for a long time and we believe we have everything we need to win races.”

“The number of manufacturers coming into the ASBK is great for the sport, as it shows the manufacturers are interested in the championship, and it will lead to healthy racing at the end of the day.”

“It has to strengthen the Championship, and when you are passionate about racing, like I am you want to see it improve. Being a part of the ASBK is good for us, hopefully we can sell tyres and grow the series along with everybody else. Most of our work has been testing with Honda and Troy and even so that’s been limited. We would still like to have a reasonable amount of people on them. This year will be a fairly steep learning curve to what works and what doesn’t, and Troy (Herfoss) has been quick, I’m sure he likes them and likes the way they feel.”

“In our first year it is definitely a friendly rivalry, and I’m sure whoever is winning races will have the bragging rights, and if you can steal a couple of results it might not become so friendly. For us in our first year to get some good results on track and further develop the tyres, we’d be stoked to pick up some good results and challenge the majors would be the ideal outcome as our first go at it. We (at a recent test) moved the tyres across a range of bikes with different set ups, Yamaha and Kawasaki and are really happy with how that went.”

While new entrants like Shinko and returning manufacturer, Michelin, admit to starting from ground zero, recent testing has shown that all the brands will be a force to be reckoned with, especially the more established Pirelli, Bridgestone and Dunlop.

In 2019 it was Pirelli who took out the championship tyre war winning with Mike Jones in the Superbike class and Tom Toparis in the Supersport class. In the Supersport 300s it was Senna Agius, who was on Pirelli for a bulk of the year before changing his front to Bridgestone for the last three rounds.

The 2020 war begins in only a few days as ASBK Round 1 blast into action at Phillip Island Grand Prix Circuit.

Can Josh Waters get the flow back on course at Hidden Valley?