The S1000RR is ferociously fast

BMW brought new levels of power to the sportsbike category with the launch of the S 1000 RR two years ago. Since that time, the only running change during production was the introduction of a marginally heavier crankshaft – made at the request of the World Superbike team – and added to the streetbike to meet homologation requirements for racing.

Cementing the fact that racing truly does improve the breed, the 2012 model year BMW has much changed chassis geometry – again at the behest of race teams – and the changes are comprehensive. The fork and shock internals are of a higher specification, with improved damping circuits.

While no more top-end power is claimed, the often criticised comparative lack of low and mid-range grunt has been addressed, thanks to a redesigned exhaust and intake along with extensive ECU changes.

The results are immediately evident both on the track and the road but it is on the road, where maximum aggression can’t be used, that the increase in mid-range grunt is most welcome.

BMW’s electronics suite is by far the best in motorcycling. This is due to its well-tuned various modes of operation and the freedom given to the rider to set their own combination of features on the fly. All systems can easily be deactivated, if preferred. An effective and fully integrated electronics suite with a wide scope of options that can be easily customised to changing track or road conditions, at this level, is unprecedented. All modes have been refined and help to make the S 1000 RR a more polished tool than ever.

The electronic quick-shifter is the best in motorcycling and works just as well at moderate throttle openings on the street, as it does swapping cogs at 13,000rpm on the track. For 2012, the S 1000 RR even gets optional ($325) heated grips!

The only electronic feature missing from the S 1000 RR is an electronic steering damper; a conventional mechanical damper is fitted which, although adjustable, does make slow speed steering on the street a little ponderous. 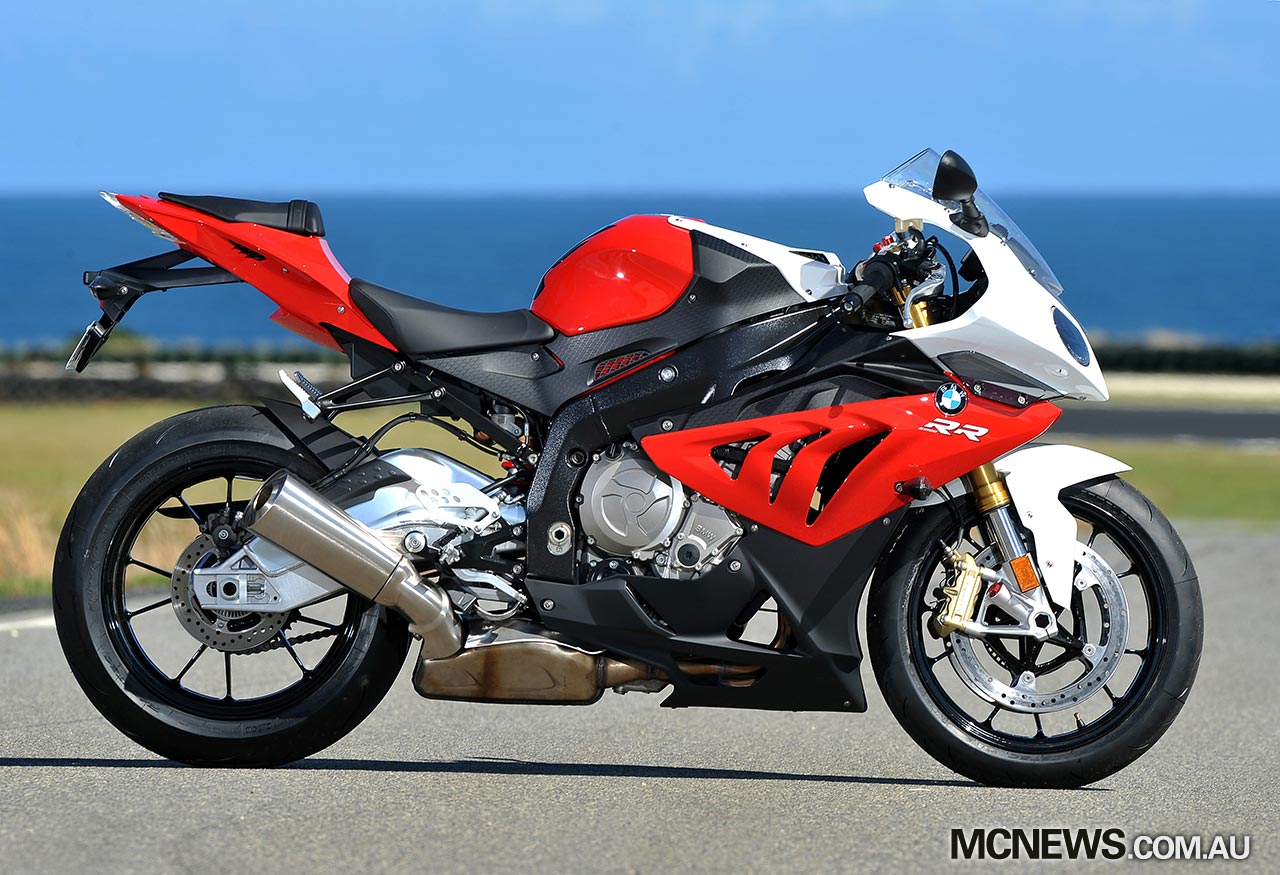 Unlike most motorcycles with selectable power delivery modes, the BMW modes are genuinely useful. On the street the soft ‘rain’ mode is brilliant at smoothing out the throttle operation and makes for more a comfortable ride over less than perfect surfaces, but as the revs rise so does the aggression, with 163hp still on tap up top this soft mode does not cause you to question your manhood. And I don’t mind saying the more aggressive modes (sport, race and slick all provide 193hp delivered increasingly hedonistic ways), while amusing, can be a little too much for the street at times. Road situations that require any more than rain mode are very few and far between. Heck, even one wheel action in rain mode is but a DTC off button away. If you can’t pull wheelies with 163hp you probably shouldn’t bother trying to do it with 193hp…

At the track with the electronics switched to full ‘manic’ the BMW is – quite literally – simply breathtaking. It is a demanding tool, with race style body positioning mandatory to keep the bike stable and the front wheel somewhere near terra-firma, combined with a hefty dose of brave pills in order to smash the throttle to the stop on the exit of turns. Corner entry feels a little sweeter with steering the bike into a turn taking a little less effort than its predecessor.

Watching true ‘A’ grade, championship level Superbike riders slide off Phillip Island’s turn 12 at 240km/h with the front pawing the air as they come on to the straight (despite a full race crouch and all their weight on the front of the bike), really displays the sheer outright speed available to those with the skill and bravery required to do this machine justice.

The fact of the matter is, however, that, outside of a Superbike grid, very few riders possess that level of skill, and the upper reaches of the BMW’s performance will never be tapped by meagre mortals. Still, it’s nice to know you are riding something with that sort of potential, despite being constantly reminded of your own inadequacies.

Styling has also been tweaked with changes to the shape of the gill shaped cut-outs in the fairing and other subtle touches to keep the S 1000 RR looking fresh. Remaining are the simple touches such as numbered clickers on the suspension with most adjustments made in seconds via the screwdriver shaped end of the key. I love this thoroughness of design, a BMW hallmark across all models. The improved mid-range grunt of the updated bike makes it infinitely more pleasurable at street speeds and that’s something I could never say of its predecessor.

About the only thing unchanged for 2012 is the price with the S 1000 RR still retailing for $22,290 plus on-road costs. Standard equipment includes ABS, traction control and quick-shifter.

NB: While Trev rode the S 1000 RR on the track and on the road, we also took along our faster compatriot, Antti Papinniemi, for his first taste of modern sportsbike traction control. Check out Antti’s second opinion here. While he is no road race champ, his 63s at Broadford on a 100,000km stock TRX850 suggest that he is about as fast as trackday punters get.