Quads are great fun in the sand and the DS650 Baja certainly has some great credentials to maximise your enjoyment.  The

The manufacturer was founded over sixty years ago in Canada and first came to fame when they produced the world’s first snowmobile. Now the company not only manufactures snowmobiles, jet-skis and quad ATV machines but also produces jet aircraft and rail transport equipment.

Bombardier offer a comprehensive range of utility and recreational quads ranging from 50cc right up to 650cc. For this test we were let loose on the sporting DS650 Baja model.

Bombardier claim that the dry-sump 653cc Rotax single offers more horsepower than any other sporting quad on the market.  The liquid-cooled four-stroke engine runs quite smoothly but does make a little more internal noise than most water-cooled engines.

Smooth and fluid drive is available from idle right through to the 7,900rpm limiter. Power does tail off a little as the revs rise but that is nothing that a set of more aggressive cams wouldn’t fix.

However the test machine had a significant boost available at the touch of a button. The machine had been fitted with a single nozzle nitrous kit for some added excitement. During our ride a single 25hp nozzle was used and the rev-limiter raised to 8,500rpm. 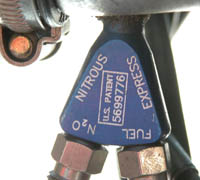 The Baja comes standard with an Autometer tachometer graduated to 10,000rpm. At first the only clue I had that the nitrous was flowing was the rapid shuffling up through the gearbox and wild forward swing of the tachometer. The back wheels were always spinning madly in a vain effort to overtake the front when the nitrous kicked in!

When in the sand dunes the owner swaps the 25hp nozzle for a 50hp item to give him a genuine 100+ horsepower at the touch of a button. Big paddle tyres are needed for the extra nitrous though, otherwise the Bombardier tries to dig its way down to China.

Even on reasonably hard packed ground the 25hp nitrous boost brought on instant wheelspin in any gear.

The nitrous system used on the machine was of the ‘wet’ variety. This means that also delivered with the nitrous is a large injection of fuel at the same time. The extra dose of fuel is forced through the same inlet nozzle as the nitrous and is pumped to the system by an electric fuel pump. This helps prevent any engine damage during extended periods of use and is a normal part of any nitrous installation.

Nitrous boosts horsepower dramatically due to its extra oxygen content which serves as a form of chemical supercharging as a lot more oxygen makes its way to the combustion chamber, which in turn provides for a bigger bang.  In rough terms the normal air we breathe contains about 20% oxygen while Nitrous has around 36% oxygen which of course makes for a much bigger bang.

But of course the standard DS650 offers no such boost in its inventory of optional equipment. However it did makes this test a whole lot more fun, and was not half as scary as it sounds.

A 42mm Mikuni carburettor supplies fuel to the engine from a 12-litre tank.

Transferring the power to reinforced 8.5” rims is a smooth shifting five-speed gearbox. A strong ‘530 chain is employed which is just one factor of many which point to the fact that the Bombardier is built more durable than most. A manual clutch is positioned in the customary position of the left bar and is light and positive in operation.

Independent A-arm suspension helps keep the DS650 pointed in the right direction. Offering a huge 305mm of travel the front shocks are adjustable for preload. At the rear a single monoshock suspends from a large swingarm and provides 279mm of travel. The rear unit is fully adjustable for preload, rebound and compression. The high-rise suspension combines with a long and wide body to give the Bombardier a purposeful stance. Ground clearance is 297mm under the front and engine and 120mm under the rear axle.

While the machine is physically large to look upon, it shrinks when aboard. Well thought out ergonomics allow the rider to clamber over the machine to transfer bodyweight for aggressive cornering.

I did get some arm pump while riding the machine but that could also have been due to the fact that I do not spent much time aboard such four-wheeled weapons.

Good lighting is provided with a total of three headlamps helping to show the way. The central light sports a 60/55w bulb while the two auxiliary lights are rated at 35w. A 290w generator provides ample power for the lights and other optional accessories.

Helping to bring the 229kg machine to halt is a set of triple disc brakes. A pair of drilled discs up front and single disc at the rear.

Bombardier’s DS650 Baja comes with a 12-month warranty and retails for $14,790. A mechanically identical but less featured DS650 is also available at the lower price of $12,990.  It appears to be a particularly well built unit and offers some of the best suspension available.

Nitrous is, of course, not a factory fitted item. 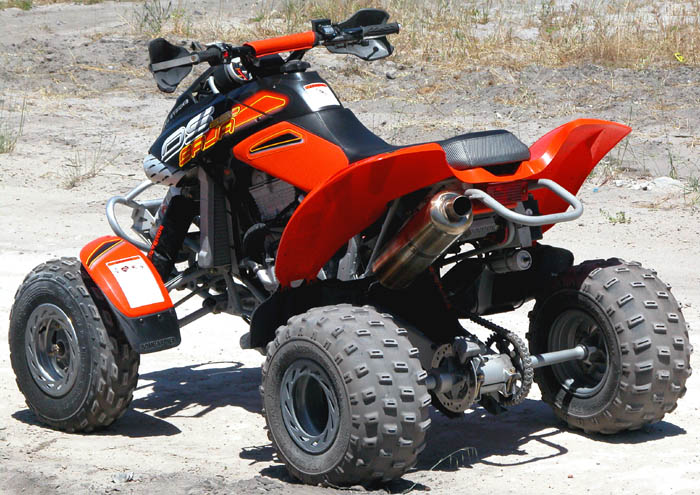 Vinales, Quartararo, Rins, Rabat and Espargaro on track in Andorra