Boris on the Misano GP | Dovi bores Lorenzo into the gravel

There was an understandably sour taste in the beer-flavoured mouths of British MotoGP fans after the Silverstone Round was cancelled.

But it was indisputably the correct call by Race Direction, especially seeing as Rabat will take some time learning to walk again after fielding Morbidelli’s bike with his legs.

You just can’t race bikes on a circuit that won’t drain its standing water, no matter how many beers the spectators have drunk or how long they’ve sat waiting in the rain.

So when the circus arrived in Misano, the championship points table was unchanged, and the clowns who’d resurfaced Silverstone were threatening journos like Mat Oxley with legal action for calling them out on their shoddy workmanship.

What was also unchanged was the open hostility Rossi carries for Marquez. Social media was ablaze with sniffling outrage when Rossi refused to shake Marquez’s hand during a pre-race press conference. 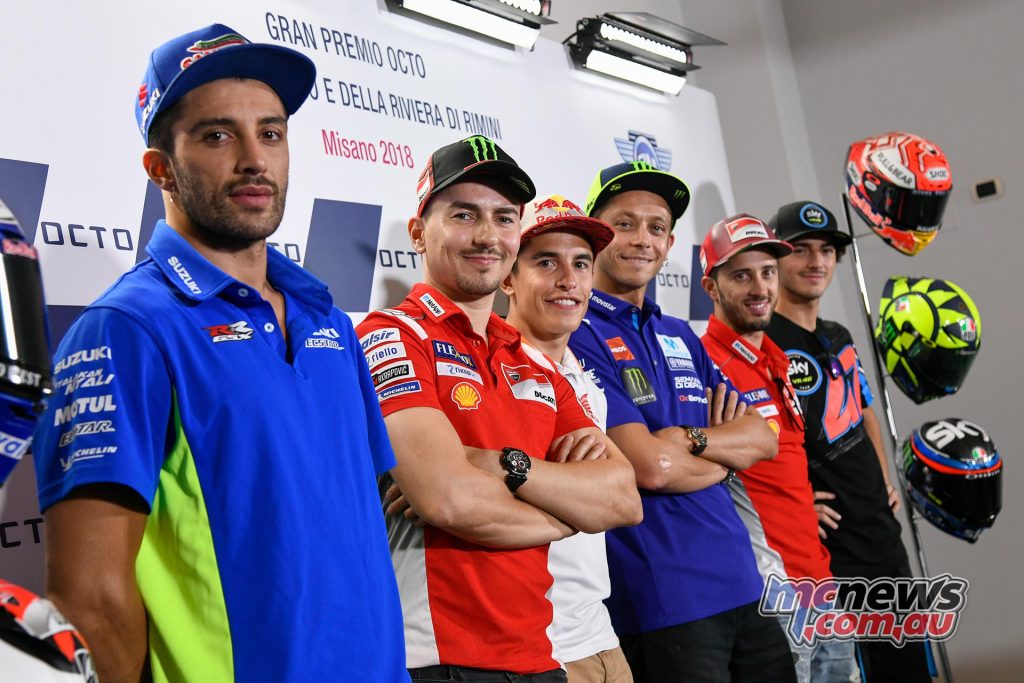 Of course, this incident was entirely confected by a journo who wondered, in a dumb question, if Rossi would extend the hand of sportsmanship to Marquez. Marquez, the eternal ingénue playing for the cameras, duly extended his hand.

Rossi, not remotely interested in playing for those same cameras, crossed his arms and refused the handshake, saying that he does not need to shake hands with the young Spaniard and that things were “OK” between them as far as he was concerned.

Cue shrieks of “bad sportsmanship” from the peanut gallery. Heh. I tend not to shake hands with people I dislike, and I would view it as an act of rank hypocrisy if I did. If I don’t like you, I sure as shit ain’t shaking your hand – sportsmanship be damned.

How quickly we forget both the history these two have and how Rossi is unlikely to be manipulated by a journo looking to score some kind of point.

Of course, because he hates being ignored and he’s walking with a swagger again, Lorenzo added his two-cents to the issue and declared them both to be “children”, as if he had always had the moral high ground in past handbag battles.

Jorge was still strutting after Qualifying, having blazed his way to pole on a track where Ducatis don’t normally sail well.

Surprisingly, Jack Miller had also qualified well, and found himself in second, followed by a hopeful Vinales, Dovizioso, Marquez, Crutchlow and a grim-mouthed Rossi back in seventh.

It seemed like Yamaha had found “something” between Silverstone and Misano. Vinales was at the pointy end, and Rossi was not all that far back – less than half a second from Lorenzo. But as the temperatures went up on race day, it would take a lot more than Misano’s traditional sea of yellow to will The Doctor onto his home podium.

The Yamahas just don’t work well in the heat. It’s been that way all season, prompting an unimaginable apology from the factory to its riders a few weeks ago.

The race start was all Lorenzo. If he’s on pole, he’s almost impossible to beat to the first turn. Jack was on his tail and Marquez in hot pursuit. But Dovizioso was in hotter pursuit and was in second by the start of Lap Two. So hot was this pursuit, Jack Miller excused himself into the gravel before Lap Two, and the great chess-game began.

Clearly inspired by Lorenzo’s recent declaration that he was “boring”, Andrea Dovzioso bored his way into the lead, and set about leaving his team-mate and Marquez in his wake. It was a stunning demonstration of how to control a race from the front – and one that Lorenzo himself had done on many occasions.

But it is processional to watch, and the nature of Misano – a track of two halves; the first half tight and technical, the second a crazed speed-fest – does throw up races like these.

So as Dovi eked his lead out to almost two seconds, Marquez and Lorenzo felt it was time to see whose pee was landing higher up the tree. It was about halfway through the race and Jorge was very full of berries.

Marquez slammed past him in Turn 14, George slammed back two corners later, rinse and repeat. This, of course, allowed Crutchlow, riding a lonely fourth, to creep a little closer and for his heart to glow with hope.

Nine laps from the end, Lorenzo once again passed Marquez, but was unable to shake him as the leading three came up on the hapless Christoff Ponsson, Rabat’s replacement, and the first rider I’ve seen lapped in MotoGP for quite a while.

The last four laps saw Marc and Jorge creep up on Dovi, reducing his lead to 1.3 seconds. But that was it. Dovi saw his pit board and began to re-apply himself, as his team-mate helpfully ploughed himself off the track two laps from the end, gifting Marquez with second and Crutchlow with third.

A wild-eyed Rins came home in fourth, 14 seconds behind the winner, and trailed by Vinales, Pedrosa and Rossi – all very processional and well-mannered.

This has changed the complexion of the championship table. Marquez’s lead appears to be insurmountable at this stage of the season. Dovizioso is 67 points behind and only three points ahead of Rossi. While Lorenzo’s recent return to form puts him in a threatening fourth with 130 points.

Aragon is next, and I’m pretty sure Lorenzo will be feral with intent. As will his “boring” team-mate. And who knows? Yamaha may even find a little something else, because while the Doctor may not win his tenth title this year, he does so like making the Spaniards look ordinary at home. But that young Marquez is so very far from ordinary.

Take a ride with Boris for Father’s Day