by Marc Jones
in Motorcycle News, Motorcycle Racing, Supercross
A A
Share on FacebookShare on TwitterShare

Conditions couldn’t have been worse for the final round of the Australian Supercross Championship at Jimboomba. Torrential rain in the morning didn’t let off until well into the night show, creating a swamp like track that troubled some of the worlds best riders. This saw organisers combine practice and qualifying while also reducing the length of the races.

After some discussion at rider briefing, the format for the day was shortened, combining the practice and qualifying sessions, as well as reducing the race lengths by several laps.

The SX1 class was filled with action packed racing, and ended in drama for one rider.

Dean Ferris came out in qualifying and put the field on notice, laying down the fastest lap, over 2.5-seconds faster than his nearest competitor Justin Brayton. Entering the night show, Brayton only needed to finish the race to defend his title, starting 18 points ahead of Dan Reardon.

It was a shaky start for Brayton though, who on the line for his heat couldn’t get his bike started and was forced to use his practice bike in a mad scramble. It went from bad to worse for the American, who was found buried in the pack early with restricted vision.

With only six riders in the heat, he did what he had to do knowing he would automatically qualify for the main event.

Todd Waters held onto the win in his heat race over Joel Wightman, while Kade Mosig took advantage of an error by Ferris to move into the lead and eventually get the win in the other heat.

It all came down to the main event and it was evident Brayton and his Penrite Honda team had a strategy in place, ride smooth and keep the bike upright.

Riders starred down the first turn and catapulted themselves through the mud and water to battle for the all important holeshot. First around the bend was Dan Reardon, closely followed by Kade Mosig.

Brayton was nowhere to be seen early but that didn’t faze the defending champion.

Reardon dropped his bike as team mate Nathan Crawford moved through the field and into the lead.

Nick Schmidt also slowly made his was through the pack and after Crawford went down, inherited the lead in the slow race.

All the while Brayton just logged laps, letting riders by, knowing they would make a mistake and he would once again make the pass. No rider could tame the slippery track, and for fans it was difficult to indentify the riders, let alone their position.

In the closing laps Crawford looked to have found another gear and made ground on Schmidt fast, realising he might get his maiden win for his career, and the final win for Troy Carroll and his Kawasaki team.

On the final lap, Crawford snuck up the inside of Schmidt, catching him off guard. The battle was on and the pair put on a show.

Schmidt looked for new lines to make the pass but Crawford was one step ahead in each case.

Entering the whoops for the final time Crawford lost control and veared off the track, riding next to the whoops alongside Schmidt before re-entering the track in front of the Suzuki rider.

With only three turns to go, Crawford pulled a few bike lengths ahead to light the candles in the final race of the year.

However, after a protest it was deemed that Crawford made up ground by missing the whoops and should have forfeited the position to Schmidt, and thus was docked two positions because of the incident.

This left Nick Schmidt to take the win and give Suzuki their first win on the 2018 RMZ 450.

“I’m definitely excited. I felt good all day and coming in to the round we had a great week. We’ve had some bad luck so far this season but we managed to turn it all around I got a decent start in the main event and I was sitting in fourth and I just put my head down and got to work. It was so muddy but I just kept picking off guys and making my way towards the lead. My mechanic just kept telling me to keep it on two wheels and I was determined to put Suzuki on the podium. A lot of crazy stuff went on after the race but the officials looked at it all and they ended up giving me the overall which is awesome. I wanted to get Suzuki a win and we got it done. I’ve loved being over here, the Wilsons Coolair Motul Suzuki team is like a family and they’ve really welcomed me into their team. I’m so grateful for the opportunity and I’m glad I could put Suzuki on the podium.”

Kade Mosig was the next rider to cross the line, although he was lapped by to two lead riders.

Dan Reardon held onto fourth after dropping his bike on several occasions.

Justin Brayton rode the smartest race of all, playing the tortoise versus the hare game, keeping it upright to finish fifth and once again, head back to America with an Australian title to his name.

Dean Ferris held onto sixth in a night that must have felt like an eternity. This locked in third position for the series, a great result for the current Australian Motocross Champion, backing up his second place finish last year. 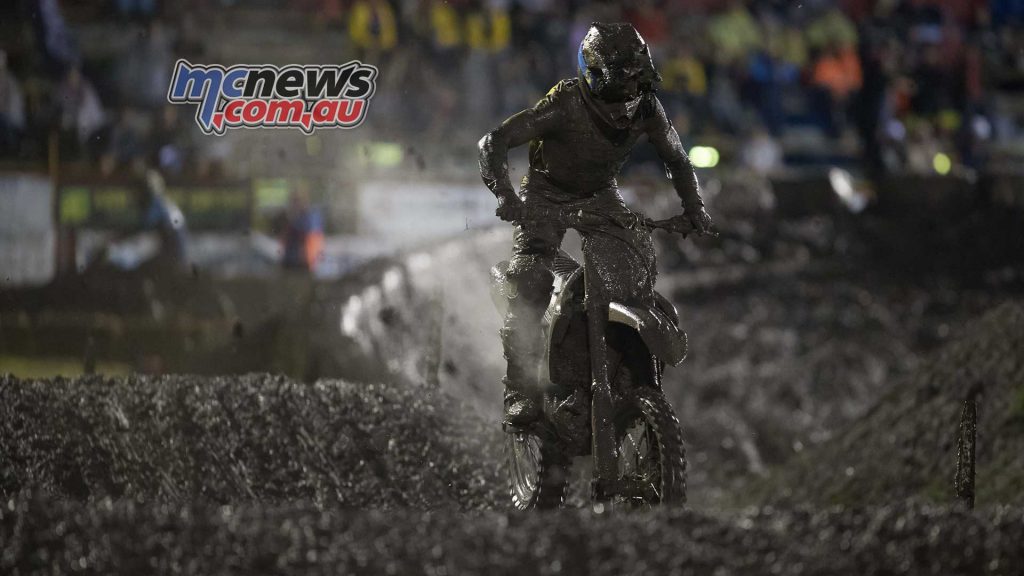 Dan Reardon claimed second in the championship, showing that age in no issue after many doubted he would be competitive this year.

Once again, Justin Brayton proved his worth, dominating the series for the second year running.

The winner was embraced by his team, and after losing SX2 title favourite Gavin Faith mid series, gave Honda something to cheer about after a long year.