Shane “Shakey” Byrne and Ryuichi Kiyonari continued their intense “War for Four” MCE Insurance British Superbike titles battle with a victory apiece in two closely-fought races at the penultimate round at Silverstone to set up for a dramatic finale.  Byrne holds a narrow 12 points advantage over Kiyonari going into the triple-header race Showdown at Brands Hatch (17/18/19 October).

Kiyonari took the initiative in the opening race at the Northamptonshire circuit, taking the lead on his Buildbase BMW in the early stages, but Byrne was shadowing his every move and Josh Brookes was also ready to get into the fight on his Milwaukee Yamaha.

Byrne closed in on Kiyonari and forced his Rapid Solicitors Kawasaki into the lead on the penultimate lap at Village, but the Japanese rider responded setting up an epic battle for supremacy on the final lap as the two riders traded places six times.

Byrne held on to take the victory by a narrow 0.064s margin from Kiyonari whilst Brookes claimed third and marked a return to the podium after his double DNF at Assen.

Byrne said: “Kiyo was incredibly strong and I needed to stay with him then on the last lap I had a little bit of a moment and I thought I have blown it. We passed each other and down the straight we were side by side and I knew whoever braked the latest would win the race. I went speedway style through the last corner and it was incredibly close but we did it.”

In the second contest Kiyonari was fixed on revenge and he claimed the lead from Byrne on the second lap of the race and twice was forced to defend his line strongly at Village as his arch rival tried to make a move. Byrne made a decisive attack to briefly lead, but the Japanese contender cut it back immediately and then held off the Rapid Solicitors Kawasaki rider to the line.

Kiyonari said: “At the end of the race Shakey tried to pass me but I pushed very hard – every lap I was pushing hard and concentrating very hard, so I am pleased to take this win. I was disappointed to not win the first race, so this makes me happier.”

Byrne added after the second race: “That was one of the hardest second place ever. The pace was much hotter than in the first race and that meant the margins for passing were smaller. We ran so close to the limit, so fair play to Kiyo.”

Brookes said: “I knew we had a chance of the podium but as usual we pushed on hard and made changes right up until the first race. We found something that meant I could be a part of that amazing race and it was pleasing to be back on the podium rather than parc ferme after the race. I wished I had a little bit more to put into it and have a chance for the win, but pushing for second was a great improvement.  Being back on the podium and in the fight felt as good as a win to me and I would have paid for a ticket to watch that one!

“In the second race I really wanted to stay with Shakey and Kiyo again and try and push to try and go better than we did in race one. Unfortunately what happened was pretty simple – I braked too late and I crashed out. I was trying even harder on the brakes as that was where I was able to make some time up on them as that area was where I had been stronger. Physics mean you can only brake so late and that lap was just too late and I was out.”

Bridewell said: “Today has been far from what we expected. We have not had an ideal weekend as the setting was out in Race 1 when I had no pace and was stuck with a group of riders. We made drastic changes for Race 2 and they made a lot of difference. It is a shame because we were a race behind. We are in a bit of a see-saw at the moment – we have one good race and one bad race. I could have got ahead of Josh here and now it looks like I will have to try again at Brands Hatch.”

Josh Waters finished seventh in race one but improved that result in the second bout with a fifth place finish. Waters is now challenging James Ellison for eight place in the championship and is 60 points clear of his Tyco Suzuki teammate John Hopkins.

Josh Waters:  “If you had offered me a top-five finish in the dry at the start of the season I would have been peaking, but where we are now I want podiums and I could see it right in front of me in that second race. I can’t fault the team or the GSX-R1000 as it was superb today; the boys did a great job and my lap times were more consistent in race two. I’m pleased with top-five but I want to keep making progress and we can hopefully push on again at Brands Hatch for the final round.”

John Hopkins:  “Going into race one we knew we had our work cut-out for us due to making the wrong tyre choice in qualifying, leaving us to start from 16th on the grid . Either way, I was determined to get the best start possible and make my way to the front in the early laps before the leaders cleared off, which was going to plan up until I lost the front under hard-braking passing Westmoreland. Sadly that ended up being the end to yet another disappointing weekend after a mechanical issue left us unable to start race two. No one was at fault, it was just a very unlucky issue that couldn’t have happened at a worse time. Regardless, I’ve got to say a big thanks to the team and my mechanics for all the hard work and I honestly couldn’t be more determined to finishing-out the year on a high at Brands in just under two weeks’ time.”

The 2014 MCE Insurance British Superbike Championship will be decided at Brands Hatch with a triple header race weekend on 17-18-19 October. 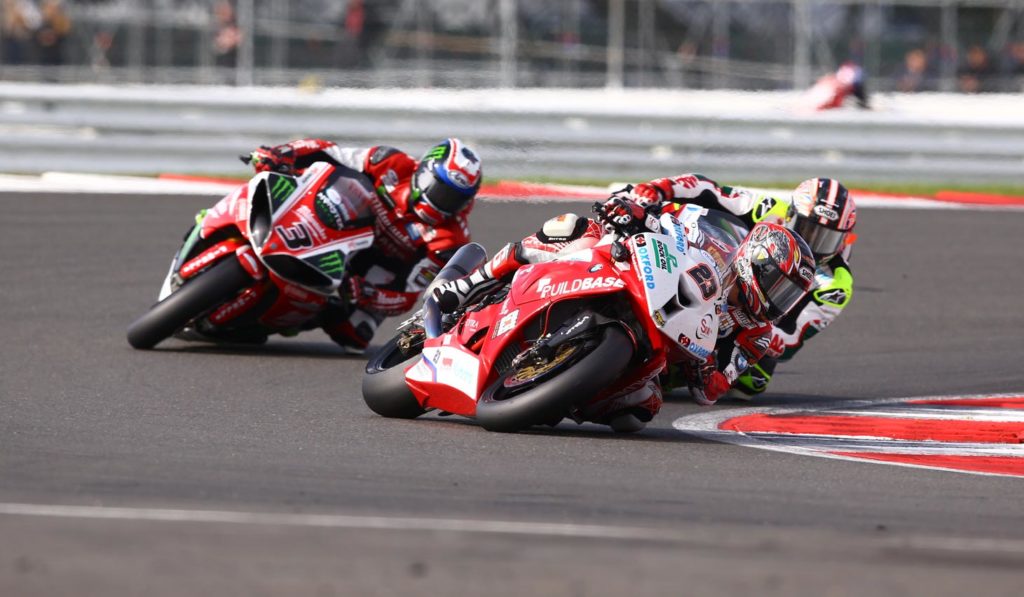