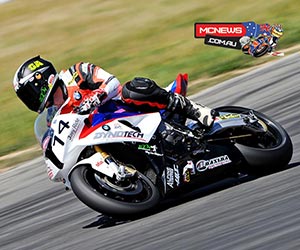 leaving Yamaha’s elder statesman to watch from the sidelines with a broken sternum. Curtain’s rivals capitalised on his absence to claw their way further up the FX-Superbike leader board and tighten the title chase up markedly heading towards the November 11 finale at Sydney’s Motorsport Park.

Rick Olson (Yamaha Racing with IPONE) has narrowed the margin from 68-points to just six-points with third overall (3-2-3) earning 62-points.

Glenn Allerton’s Saturday wet weather form was clearly no fluke as the Sydneysider set a new qualifying lap record of 1m24.522 (previous was 1m24.928 set by Scott Charlton on a BMW in 2011) on his way to pole position before backing that up with a clean sweep of race wins. Allerton set another benchmark in the races with a new 1m24.219 race lap record and combined with his Saturday efforts on the Hepburn Motorsports BMW ended the weekend with ten race wins.

“I’m happy, there was a lot of work obviously and the conditions yesterday made it difficult to stay on the bike let alone race.

“Today though I felt like I got pushed in every race and it was certainly no walk in the park as the other guys were riding really well.

“Daniel (Stauffer), Cru (Halliday – Formula Oz) and despite not being on a race bike all that much of late Chris Seaton also rode really well. It’s a good thing for the sport that these guys are still out there and still fast. 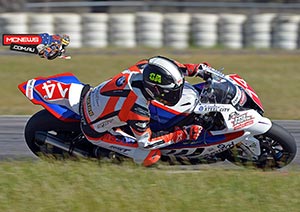 “Overall I’m really happy with the Hepburn Motorsport BMW team as they did a really good job for me this weekend.

“We have done some updates with the clutch and the bike really gets off the line well now.”

Allerton’s day almost ended on a distinctly sour note when he struck his head in the truck just before the final Superbike race.

Allerton explained, “I’m not happy about smashing my head in the back of the truck, I had blood going everywhere, the boys quickly padded my head, but my helmet filled up with blood which wasn’t very good.”

Second was Albury’s Chris Seaton on board the delectable Aluma-Lite Ducati 1198S with an impressive two-three-two results.

“Today was great. I expected to be battling for top five, but to get on the podium was a great result.

“The team did a great job with the bike. It’s not often you get to jump straight on an unfamiliar bike and be that close straight off the bat.

“It took me a bit to get back up to speed as I have not been here since 2007 but I really enjoyed the racing, especially that last race although my body was starting to get very sore from the weekend’s work.

“A big credit must go out to all the officials, there were a few delays but they got the day done and dusted in the end.”

Rick Olson climbed the final rung on the rostrum and seemed none too pleased with that result. 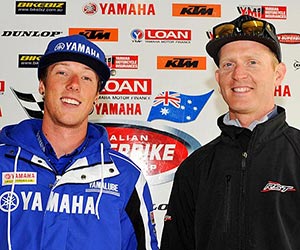 Russell Holland had contested the meeting on an Aprilia but was caught out at turn two by water from Saturday’s downpours still seeping out of cracks in the the track on Sunday. Holland was released from hospital after being cleared of breaks but after still suffering significant discomfort in his shoulder sought more scans where a break in the shoulder blade was confirmed.

Sean Condon (BikeBiz IPONE Racing/Swann Insurance) had a day to remember. The Sydneysider proved too good at Winton with pole position and one-one-two results rocketing him up the rankings with 72-points his Winton rewards. Condon now leads the series with 290-points from Curtain (288pts), Lockart (256pts). Jones slipped backed to fourth with 248-points, a single point ahead of Blair (247pts).

Lap records were also broken in this class with Condon undercutting both Curtain’s qualifying and race lap records on his way to a 4.008 race one victory over Michael Blair. Second-place qualifier Mike Jones looked on form to challenge Condon and hit the lead with three laps to run before losing the front at turn-nine, allowing Condon to cruise home to victory.

The FX-600 highlight of the day was the third and final race with Condon and Jones engaged in a heady battle for the lead. Jones eventually got the upper hand on Condon with Blair finishing third.

That result was enough to give Blair second for the round and said, “We were slowly getting down to the quick boys pace and were competitive all weekend.

“The team was awesome, a massive thanks to them and also to Finson Motorsport for all their help.”

Championship leader and round winner Condon; “The weekend has been unreal, two firsts and a second, can’t complain, two-points ahead of Kev. Unfortunately he couldn’t race today which was disappointing as I would have liked to be able to beat him fair and square, but that’s racing. Thanks to my sponsors, IPONE and Swann Insurance.”

Third for the round went to Lockart on 56-points (3-4-4), Adrian Di Giandomenico in fourth on 49-points and Jones two points adrift in fifth.

Allerton ruled the roost again in Formula Oz with a 1m23.934 pole position and three dazzling victories capping off his 100 per cent strike rate for the weekend. The BMW man may have won the battle but his absence from the field at other rounds meant he was never in the war, with the Championship victory going to Yamaha’s Cru Halliday.

Second place in the opening race was enough for the 24-year-old to take home the Formula Oz Championship silverware due to an unassailable points lead with a round still remaining; such was his dominance in the earlier parts of the season.

“It’s a good feeling to win the championship, won it in the first race with two races to spare and a round to go, so I can now head out in the final races, play with the big boys and push it to 100 per cent.” Halliday said after race one.

“I was riding a bit cautious there. I didn’t want to make a stupid mistake, fall off, hurt myself and lose the championship for Yamaha.”

Third for the round went to Hepburn/BMW rider Daniel Stauffer, just two-points behind Halliday. The highest finishing Victorian was Chris Trounson on the VIP Petfood Honda CBR 1000RR with 54-points and fourth place ahead of Gas Honda’s Nick Waters.

Competitors now have five weeks to fettle themselves and their machinery before the November 11 Sydney Motorsport Park finale.