Again it was a Brandon Demmery and Kyle Buckley in the final FX300 Cup stanza for the day.

A red flag incident stopped the race after five laps and the decision was made to award half points and with the race being taken back a lap Buckley was awarded the win over Demmery by 0.101 of a second. 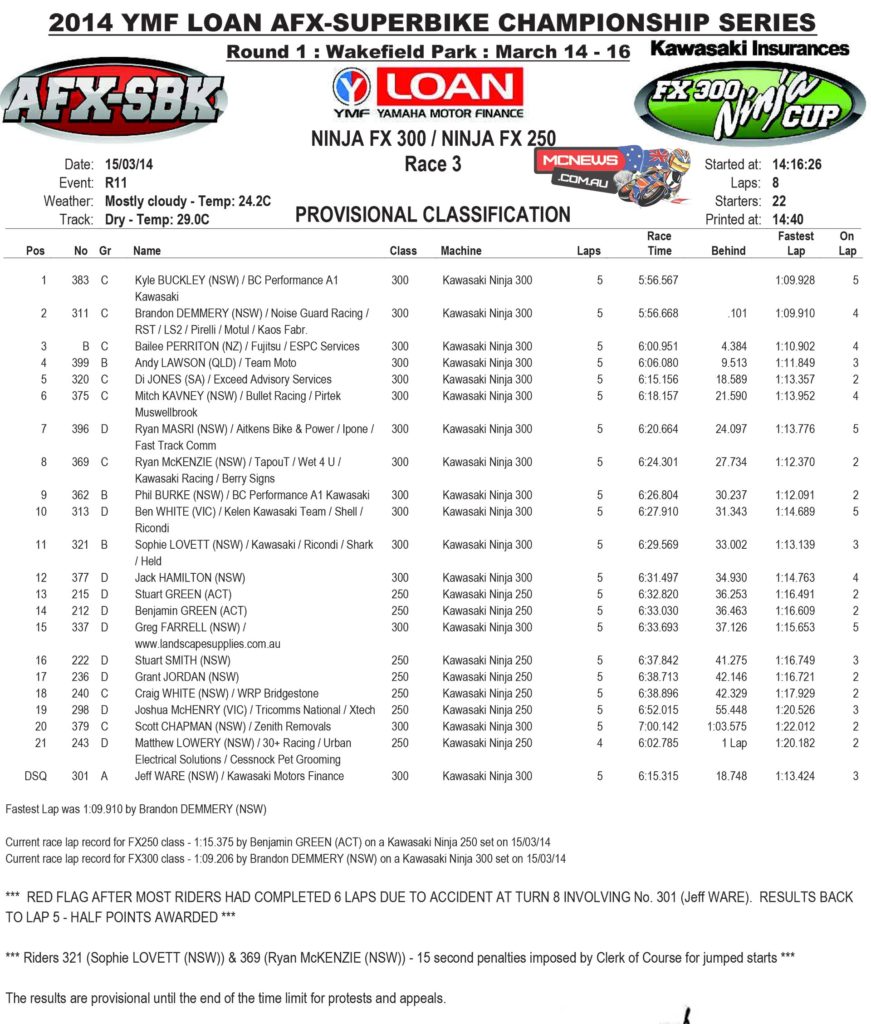 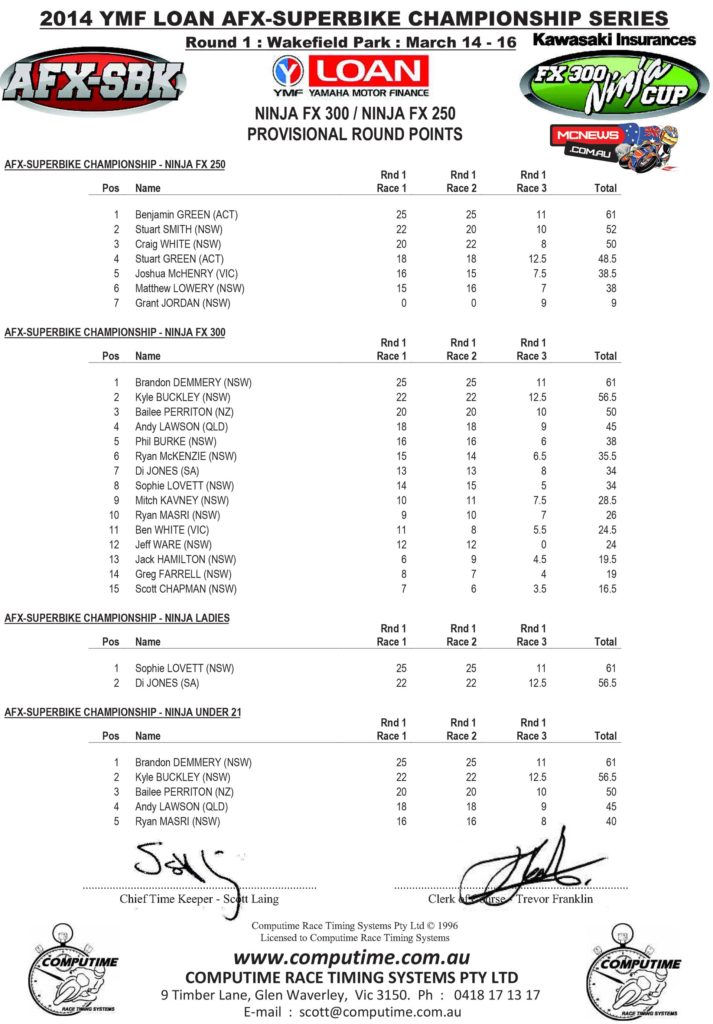 Glenn Scott got away well but this time his chief protagonist was Jed Metcher. Phil Lovett stayed in touch for the first couple of laps but then started to lose touch as both Scott and Metcher started putting in a run of low-mid 59s, Lovett also dipping under the minute barrier with a 59.754.

Scott took the win by half-a-second over Metcher while Lovett scored the final step on the podium well ahead of Chris Trounson and Matthew Harding.

Aaron Morris had his clutch control absolutely perfect in the final Supersport bout of the day to get a couple of bike lengths over Wagner and Spriggs by turn one.  By the end of lap one Morris has turned that gap into half-a-second.

Aiden Wagner put in a great second lap to close that back down to 0.235 of a second as they commenced lap three. He then took the lead on the following lap just as Callum Spriggs started winding up to speed with 60.98 lap that saw him close to within three-tenths of second placed Wagner with six laps to go.

Wagner went quicker again on lap seven with a 60.838 extending his lead over Morris to half-a-second. Spriggs had not been able to make any inroads on Morris but had a reasonable advantage over Gobert and Falzon.

With three laps to go things really began to hot up with both Wagner and Morris getting down to 60.79.  Morris sneaked ahead of Wagner but then some lapped traffic allowed Spriggs to close to right back up to the pair after also sneaking under the 61-second barrier.

Aaron Morris thus made a clean sweep of the opening AFX-Supersport round of the season. Aiden Wagner second with 66 points while Callum Spriggs wrapped up the final spot on the outright podium on 60 points, eight points ahead of Daniel Falzon who failed to really get on terms with that leading trio this weekend.

Morris was understandably pleased with his start to the season; “A good start to the FX series and I am quite happy with the results , it’s great to be at a track where horsepower doesn’t matter.

“It didn’t come easy though, Aiden (Wagner) kept me honest most of the time, hopefully I can continue the winning streak tomorrow.” 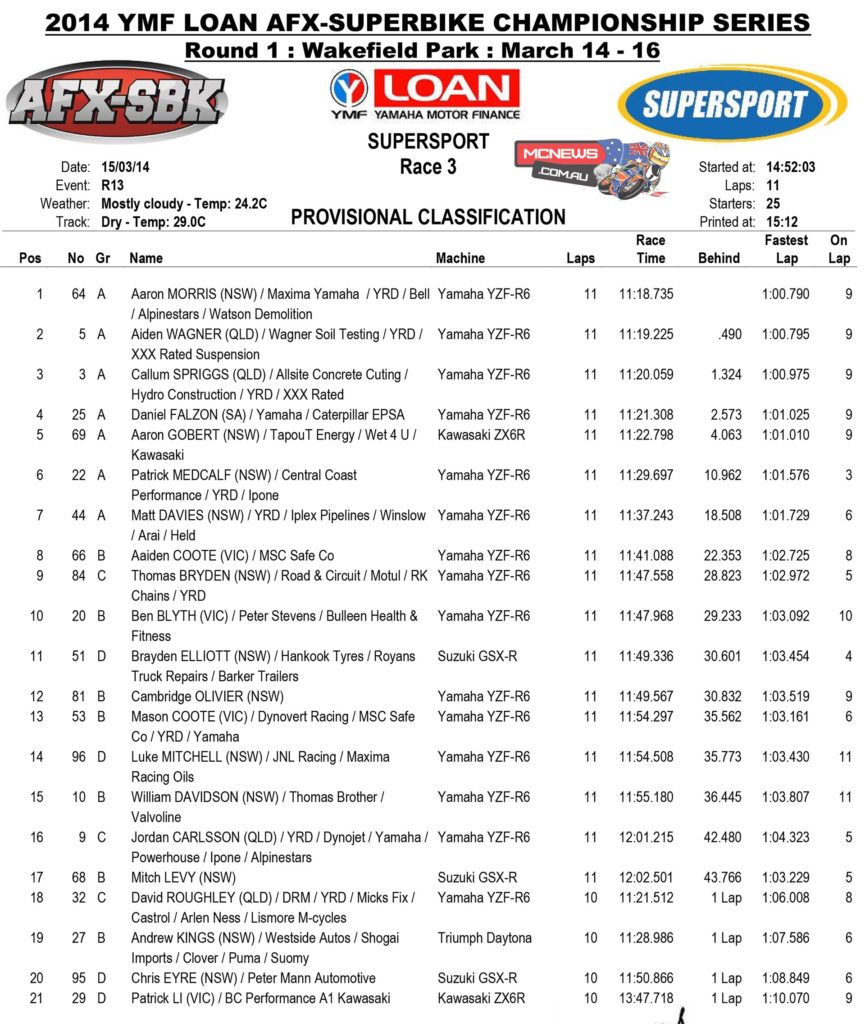 Glenn Scott again proved the value of pole position here at Wakefield Park by again leading the field through turn one, this time around Wayne Maxwell the man immediately on his tail but Glenn Allerton quickly found a way through to again take station on Scott’s tailpipe.

Scott and Allerton crossed the stripe for the first time elbow to elbow and side-by-side, it was Allerton who took the lead in turn one.  Sean Condon ran off on lap two and did incredibly well to pull the Kawasaki up while heading for the tyre wall, rejoining and the race at the back of the field. Another rider fell up the top of the circuit also on that second lap.

As they started lap three it was Glenn Scott holding sway up front from Allerton, Maxwell and then Stauffer joined the party with a 59.38.  Allerton took the lead again and led the field across the line with nine laps to run. The wind had got up for this third and final stanza and while the sky looked foreboding there was little chance of rain.

Allerton then went down at the top of the circuit and with him and his machine in a risky position officials brought out the red flag. Allerton was up and back on his machine before riders had returned to pit lane but officials took advantage of the stoppage to also clear a couple of stricken machines from around the circuit.  With three laps finished the race then was to become a two-part affair, with a re-start for the final eight laps, with the result to be decided on combined time

At the re-start the whole front row got away cleanly but Maxwell took the best line into turn one and led four Honda Fireblades over the course of the entire opening lap. A 63.7 from a standard start for Maxwell but only 9-tenths covered the top five at the end of lap one.  Robbie Bugden was that fifth placed rider before being displaced by Dustin Goldsmith on lap two.

The last of the leading quartet decided he didn’t want to be the last of the group on lap three with a 59.29 making him the fastest man on the circuit before taking third place from Stauffer on the next lap. Goldsmith then pushed Stauffer further back to fifth place, the Kurri Kurri man then started to slow with some sort of problem.

Only three-tenths covered Scott, Maxwell and Herfoss with three laps to run in the second part of this two-part race. It looked likely that Herfoss was set to make a challenge on Scott and perhaps even the race leader but then lost ground and his challenge appeared over with two laps to run.

Maxwell put down a 58.974 on the penultimate lap to start the final lap with a 0.467 of a second buffer over Scott. That gap proved enough for Scott not to be able to mount a last lap challenge and Maxwell crossed the line with a 0.24 of a second lead over Scott. Troy Herfoss broke the lap record with a 58.793 on his final circuit but was not close enough to Scott to mount a challenge for second place.

On combined times across the two parts of the race Glenn Scott was declared the winner ahead of Wayne Maxwell while Troy Herfoss rounded out the race three podium.  Jamie Stauffer was awarded fourth place ahead of Mike Jones.

Glenn Scott took the overall round win with 72 points to Wayne Maxwell’s 58 points. Jamie Stauffer third overall on 49 points and despite taking no points from the final race Glenn Allerton is fourth in the standings with 47 points.

Tomorrow’s race action will be shown on MCNews.com.au via live video feed with commentary by Trevor Hedge and Phil Harlum. 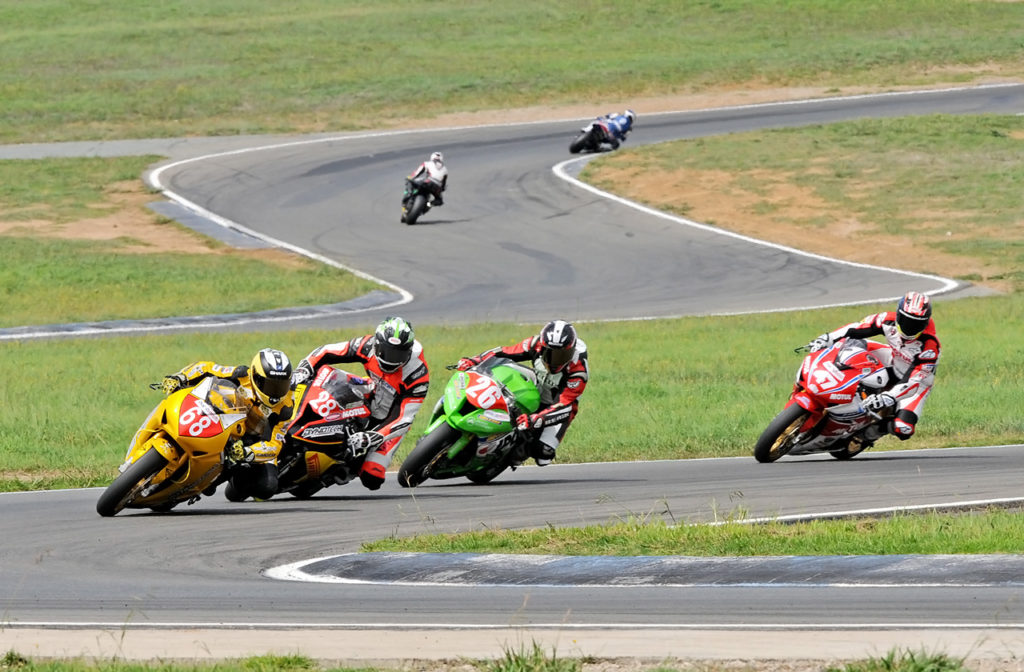 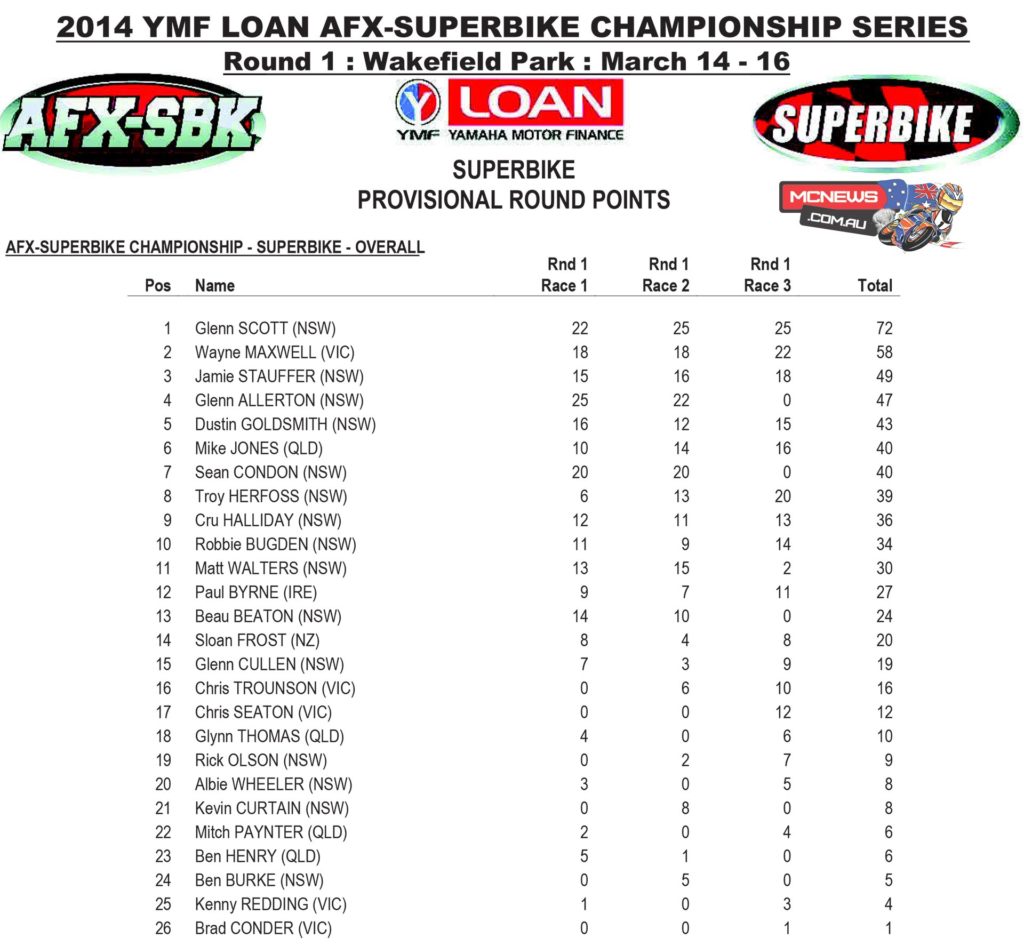 A brief sun shower passed over Wakefield Park as the Pro Twins and Nakedbike riders prepared their final bout of the day but the water disappeared as soon as it hit the warm track and thus conditions looked dry for the race. Riders headed out but then Craig McMartin came in to make not to the officials that one of the corners was actually wet thus they decided to return to the pits and delay the start.

Once underway Angus Reekie found the conditions to his liking and streaked away from Simon Galloway and Craig McMartin to an easy 13.6 second win. 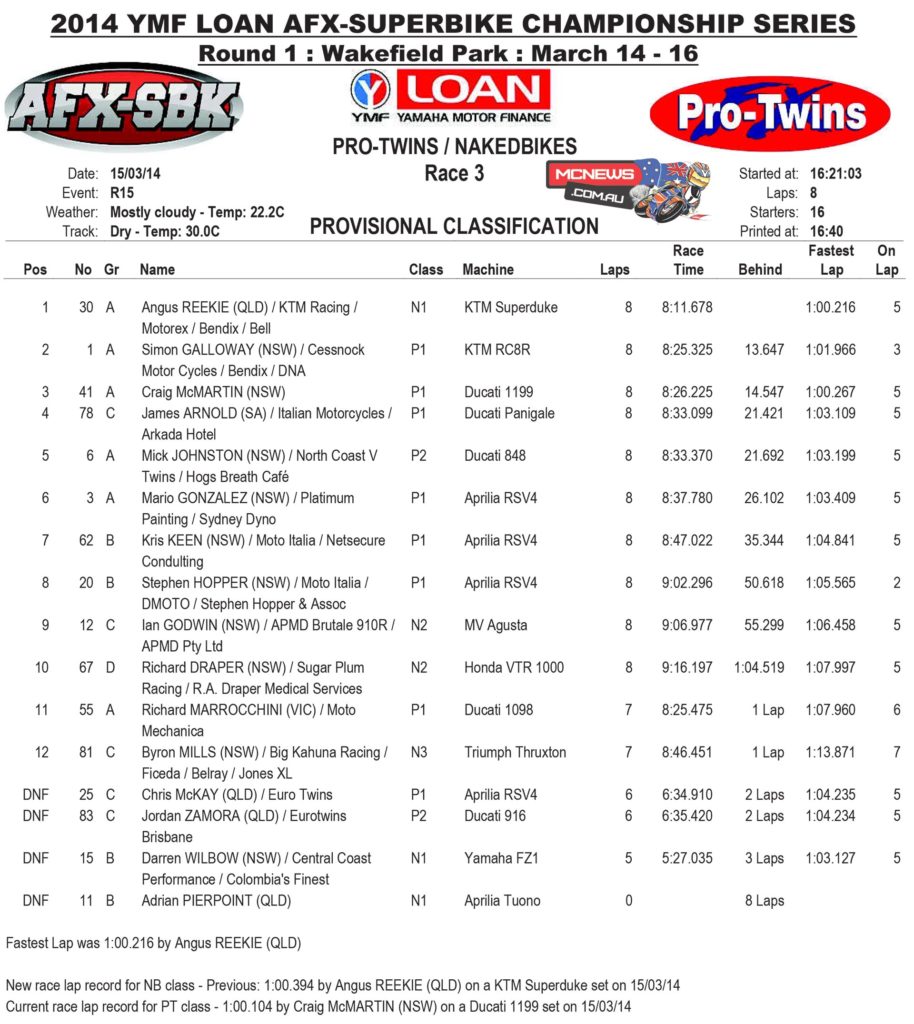 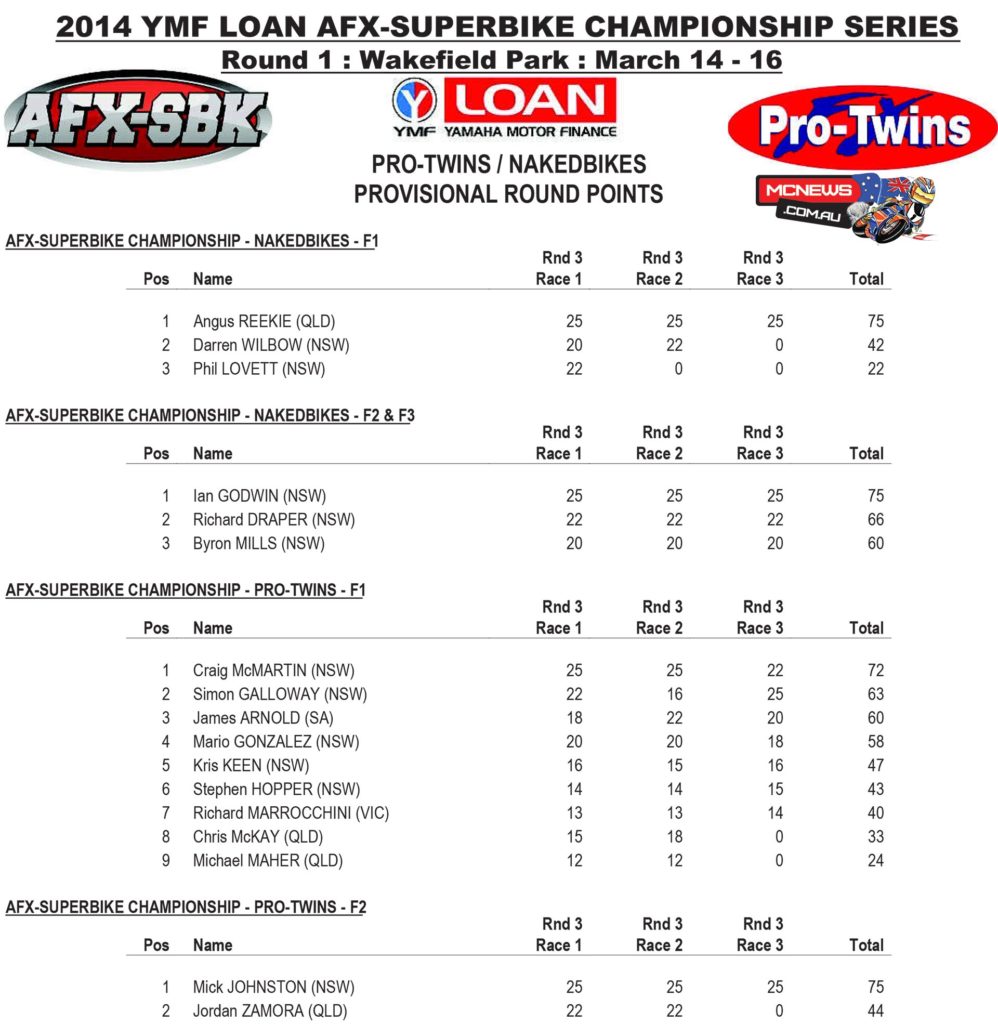 The final on track action of the day was the 16 lap FX Challenge Cup for C & D graded riders. James Arnold wrapped this up with a comprehensive 12-second victory over Jason Ivkovic. Micheal McLinden was third ahead of Michael Underwood.