The Lincolnshire rider, who set Pole Position, also took the fastest lap of the race with an impressive effort of 133.313mph on the fifth and final lap of the 7.4-mile circuit. His team-mate William Dunlop finished sixth and set his fastest-ever lap around Dundrod at 132.745mph.

Guy Martin: “The TAS boys keep giving me a great Tyco Suzuki to ride and I’m just doing my job boy, just doing my job. But yeah, it’s a good start to the week, although we’ve got a bigger job to do on Saturday. Bruce Anstey is riding really well and I think by today’s result, it’s just going to be him and me on Saturday, but you never know what Michael Dunlop can turn up.

“The longer races will suit me and I’ve just got to keep the pressure on, but there’s no safer man to ride with than Bruce. On the 600 I think I just need to ‘man up’ a bit, as you really need to wring the neck off the smaller bikes around Dundrod. I want a result on the GSX-R600, but it’s the big class that takes priority with me here this weekend.”

William Dunlop: “I’m disappointed as I had good pace and was right with Guy into Wheelers on that opening lap. I got lifted up by another rider at the ‘hole in the wall,’ then I struggled at the hairpin. I did made good progress and recorded my best-ever lap times today at 132.745mph, but I think I could have finished stronger; although we still have Saturday. The Tyco Suzuki GSX-R600 is a missile once I get it wound-up but the Supersport race is going to be another tight affair on Saturday at the UGP.”

Philip Neill – Team Manager:  “Superb! Just one second away from the outright lap record in the first race of the UGP Festival is fantastic. Fair play to Bruce Anstey though, as when he’s on top form he takes some beating. Guy is certainly a master of Dundrod and has become hard to beat on a Superbike these days. It certainly was an exciting race and it was especially nice to hear Guy praise his Tyco Suzuki GSX-R1000 after the race – describing it as the best it has ever been. That statement is testament to the effort put in by every member of our team, as they all play a part in producing the overall package.

“William pushed hard and set his best-ever lap around Dundrod. However he hasn’t been feeling one hundred percent this past few days, but with some rest and a few minor set-up changes, I’m sure he will be challenging for podiums on Saturday.

“Let’s hope for some more good weather to produce similar close racing and hopefully we can get some Tyco Suzukis on the top step once again.” 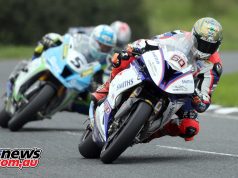 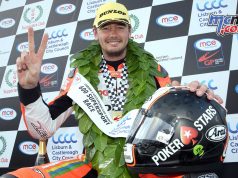 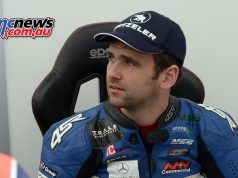 William Dunlop has died during practice for Skerries 100