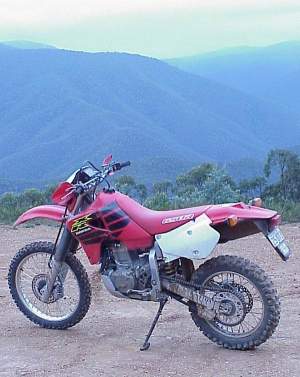 This was more of an adventure than just a road test.

We covered around 350 kilometres aboard the new XR through the Snowy Mountains. The terrain was awesome, at times we were nearly 6000 feet above sea level and riding through clouds! This was as much of a test for this journo’ as it was for Honda’s new XR650.

The XR650 was up to the challenge much more than I. The hill climbs were incredible and seemed to go on forever. The tractor like pull from the new 649cc engine was what got me up to the top of them, not skill, not luck, just masses of low speed pull in any gear – available everywhere in the rev range with no pinging or protesting of any kind from the drive train.

That is not to say the 650 lacks a top end – it doesn’t. It loves to rev and doesn’t tail off like its XR600 predecessor. The de-restricted XR650 with competition baffle is good for around 50 rear wheel horsepower. Torque is also prodigious. (Dyno charts will be up later this week).

De-restriction is carried out by removing the air intake snorkel and additional plate in the rear of the airbox. The rubber manifold between the carb’ and cylinder head is replaced with the unrestricted manifold that is supplied with the bike. The standard muffler baffle can then be replaced with the competition item that is available from Honda dealers for around $260. The standard jet is a 112. The supplied competition jet is a 175 but this was thought a little rich for our test bikes so we ran with a 162. Pilot remained the same and the mixture screw was set 2 turns out.

The starting process is carried out by way of a kick-start lever that has a built in safety mechanism to prevent any injuries from kickbacks. A breakaway bush is mounted at the base of the kick-start lever that actually slips if severe back tension is experienced. The XR650 has a camshaft actuated de-compression system that works quite well and with the improved kick-start ratio makes for easier starting than the XR600.

The carburettor looks similar in appearance to the XR600 but is very much a changed unit. It has a 40mm bore and provided us with perfect carburation, surprising given the extreme altitude changes we were putting them through. I never stalled once even with the very low speed manoeuvring that was needed to overcome some of the obstacles. This speaks volumes for how well the fuel delivery system worked. The carb’ is fed from a 10-litre fuel tank which includes a 2-litre reserve.   Fuel economy should range between 100 kilometres (going hard) and around 170 kilometres (going slow).

One of the guys managed to dunk a XR650 in one of the 30 or so river crossings we negotiated. The bike was retrieved and the air-box inspected to reveal that no water had found it’s way in to the engine whatsoever. A few kicks with the ignition turned off cleared out the unburned fuel, and then she fired up quite quickly to everyone’s surprise and relief.

A similar automatic timing chain tensioning system is used as that on the XR400. The camshaft has 3 lobes, 2 for the pair of inlet valves and one for the exhaust valves which works by way of a split rocker arm loading both of the exhaust valves to allow the spent gases to escape. Valve adjustment is simple and is accessed by way of covers similar to those seen on the ‘83/’84 XR 250.

The bike comes with a skidpan constructed of high-impact resin, which proved to be much stronger than it appeared. Enduro riders will want to add another piece to the to the top of the pan near the bottom radiator hose as this is somewhat vulnerable. Of course for ultimate protection the after-market suppliers will soon have tough aluminium bash plates available.

The seat is reasonably comfortable for this style of bike, it is also easy to move about on.

The XR was of course nice and easy to mono but it surprised me how easy it is to keep the front wheel on the deck if you need to, like uphill sections for example.  The bike also hooked up incredibly well.

All considered the XR650 looks to be a fantastic trail or enduro bike for riders of all skill levels. Unlike some of the more hard-core European competition it doesn’t demand to be ridden hard in order for it to work. This means that the XR650 is just as happy tootling along (as I do) or being thrashed senseless through hard terrain.

The $9,990 + ORC asking price seems quite reasonable when stacked up next to the competition. The XR600 replacement has been a long time coming but it seems to have been worth the wait.