by Trev
in Honda, Honda News, Honda Reviews
A A
Share on FacebookShare on TwitterShare

Unlike many had hoped, the Crossrunner is not a proper dual-sport adventure machine. That’s not being cynical, it is what it is.

Instead, the Crossrunner is a sports-touring machine designed for the road but with enough ground clearance to comfortably traverse graded dirt roads. You could venture a little further off-road if you were keen, no doubt a Crossrunner could get an experienced rider to some very out of the way places. But if that’s your end game, I suggest you stop reading here and go peruse a BMW (GS), Yamaha (Super Tenere), KTM (1190 Adventure) or Triumph (Tiger 800XC) catalogue, as these manufacturers have machines that will fulfill that more adventurous role much better. If, instead, you are after a comfortable and enjoyable sports-touring machine that offers reasonable value and have no visions of trying to cross the Simpson Desert, then read on…

The Crossrunner doesn’t offer any fancy electronic innovations such as traction control or electronically adjustable suspension. You don’t even get the handy hydraulic pre-load adjuster from the donor road bike; it’s out with the (provided) c-spanner and time for some skinned knuckles to add more rear preload or screw on a little more rebound damping.

What the Crossrunner does offer, however, is 782cc of glorious sounding (and feeling) V-4 goodness housed in a thoroughly competent and well sorted chassis, matched with great brakes and a comfortable riding position.

The long heralded VFR800 engine is an absolute gem. In Crossrunner guise a heavier flywheel adds a little more lilt and character to what was already one of the most charismatic powerplants ever to grace a Honda chassis.

Instead of it being a watered down version of the existing donk, as we so often see with naked bikes and pretend off-roaders, Honda has raised this latest incarnation to new levels of hedonism and banished the few gripes that we had with previous versions. The VTEC transition is smoother than ever before and in every way this latest iteration of the RC46 coded donk is the best yet. 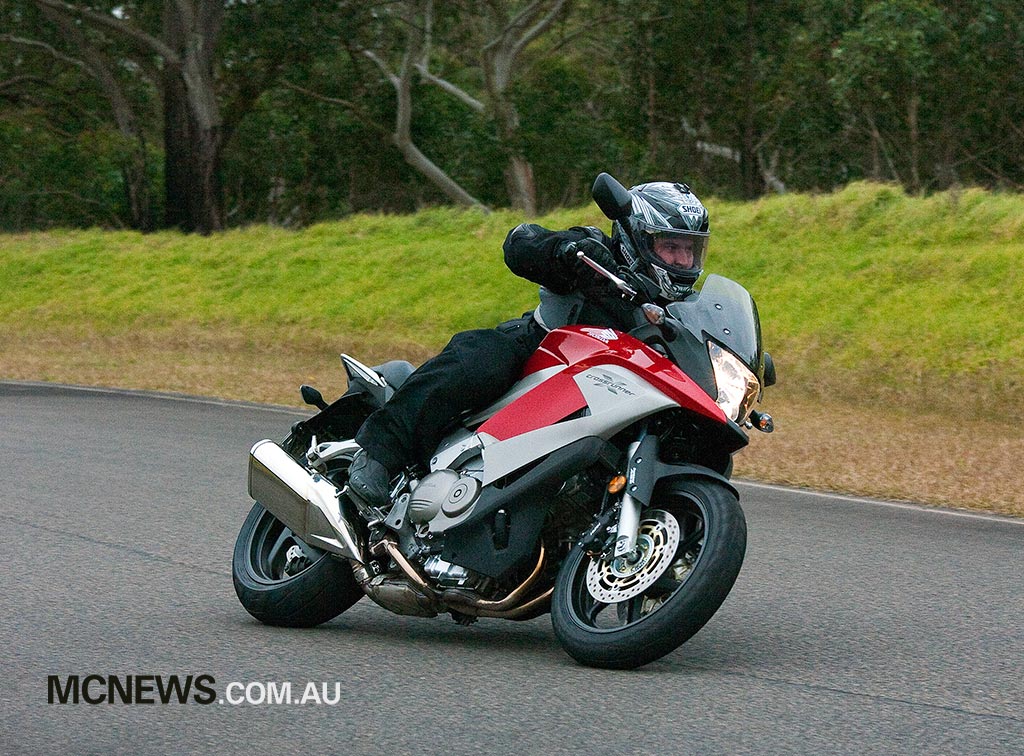 Along with some changes to the intake tracts, the single side-exit muffler, adds a slightly more baritone timbre to the V4s voice, particularly at low rpm. That low-end bass then transcends through a soulful cadenza before the final movement explodes into a stirring crescendo as the LCD tachometer pushes towards the 12,000rpm limiter. An aftermarket muffler would add even more soul to the opera, putting stretchmarks round to your earlobes from the grins that cracking the throttle would induce.

Honda’s got the gift ideas for dad this Father’s Day!

Mated to an absolutely superb six-speed gearbox, the drivetrain is pure class. As far as thrills and riding pleasure goes, the V4 mill far surpasses the enjoyment level that its somewhat modest 100hp claim leads you to expect. There has rarely been a larger case of, ‘it is not how big it is, but how you use it’, than right here.

It is truly amazing what improvements can be made to an existing engine with just some subtle plumbing tweaks and the benefits of the latest improvements to engine management. Riding the Crossrunner back to back with the VFR800 would have you thinking the VFR had a clogged air-filter or desperately in need of a tune.

Likewise, the seemingly unexciting chassis figures and slightly embarrassing 240kg kerb weight would suggest the Crossrunner is a bit of a fat heifer. Nothing could be further from the truth and the Crossrunner feels light picking it off the sidestand, and light when underway.

It’s no Fireblade, that’s for sure, but is more than capable of cutting an excellent pace in the hills, and even a respectable velocity on the track. Bumpy roads (read almost every road in NSW) do make the rear end struggle a little, but the damping is competent enough to bring the spring under control quickly.

Add a pillion and luggage, however, and I suggest it may start to wallow under the load on bumpy backroads. On smooth blacktop however the Crossrunner is taut, stable and relatively precise.

Longer trail and wheelbase figures than the VFR800 help explain the rock solid stability, and the wide bars help to overcome the slow steering trade-off and the Crossrunner remains quite agile. Changing lines while committed just requires a little more peg and bar pressure to counter your initial misjudgment.

The combined braking system proves competent and is ably backed up by a well-tuned, but not switchable, ABS system. Many malign the linked nature of the brakes but as far as road riding goes I’m a convert.

In a panic stop situation, braking power is seamlessly balanced between front and rear by proportioning valves; the bike just squats and screeches to a halt with a minimum of fuss. Stability under brakes, under power or at full lean angle, is just brilliant. The Crossrunner remains composed and virtually unflappable no matter what is thrown at it.

Riding position is quite upright and perfectly comfortable for the upper body, although legroom may prove a problem for those with long pins, as the pegs are mounted higher than you would expect. The seat is firmly padded and sculpted low to keep the seat height to a manageable – for most – 816mm. I have no doubt that using its full 350km tank range between stops would be perfectly manageable. An optional taller screen is available for added long-range comfort, as are heated grips and wind deflectors.

The instrumentation and switchgear are fairly average. I generally despise LCD tachometers but the Crossrunner’s crack at it is almost acceptable. The buttons are hard to reach on the move. The mirrors work great and both brake and clutch levers are adjustable for reach.

The Crossrunner is not that fashionable, but it is a hugely versatile and thoroughly enjoyable motorcycle that equals more than the sum of its parts. The VFR1200 derived optional panniers and top-box combination adds great versatility but at (gasp) $2528.90, I can’t see all that many buyers plumping for the added convenience of factory luggage.

The luggage is similarly exorbitantly priced in other markets, so it’s not a case of Honda Australia profiteering and they must be given some credit for trying to keep the price of the bike down to a reasonable level, which at $14,990 they have. But one glance at some of the competition the Crossrunner faces in this increasingly tough market from Triumph’s Sprint GT, or Suzuki’s absolutely bargain priced DL1000 clearly shows their hand has been forced in regards to ensuring their pricing is competitive.

One thing the Crossrunner certainly does have in its favour, however, is that free-spinning V-4 powerplant as no matter what spec’ sheets show in regards to power or torque, this donk rocks like few others and is certainly the Crossrunner’s greatest asset.