Jack Miller, somewhat controversially, made the leap from Moto3 directly to the premier MotoGP category this year, albeit on a third rung ‘Open’ category machine, as he learns the big-bore ropes in 2015.

While his 12-points scored thus far this season does not sound all that encouraging at first glance, Miller is actually the third highest placed ‘Open’ category rider,  behind Ducati’s Hector Barbera and Yamaha’s Loris Baz.

With four points scoring races out of the nine races held so far this season, and a season best of 11th outright at Catalunya, the 20-year-old’s results  in the premier class are actually quite encouraging. Especially as almost everyone riding a Honda this year has struggled with grip problems, Miller included.

Jack Miller has been back in Australia during the off-season break and we took the opportunity to have a chat with the 20-year-old today. Jack flys to America next Tuesday, where he will contest round ten of the 2015 MotoGP World Championship at Indy.

So Jack, where is your regular European base this season?

Tarragona in Spain is where I fly in and out of, wash my clothes etc.

And what’s the best thing about being based in Spain?

The weather, it’s great for training and it is a really cool place to be.

And your favourite form of training?

Riding motocross is by far my favourite training, the most fun, but I also do a lot of cycling and running, a fair bit of everything really to mix it up. But yes, motocross for sure is the most fun.

And on the dirt, two-stroke or four-stroke?

Two-stroke for sure, same as in road racing, I would rather be on a 500 than a MotoGP bike.

I see you have been hanging out with Danny Kent a fair bit of late, so he must be one of the guys you most like hanging around with in the paddock?

Yeah we have him (Danny Kent), over here at the moment, living the Australian way of life, and loving it.

You had never ridden any big-bore machines before jumping on the MotoGP bike, what was the biggest surprise riding it for the first few times?

Hardest thing to get used to was the brakes, the power you get used to pretty quickly, but the carbon brakes are unbelievable.

With traction control set-up and engine mapping etc, how much time of your race weekends is spent going over that?

Not much at all really, we run the Marelli system, and that doesn’t work all that great, so we don’t really worry about that all that much, we don’t run too much of it (traction control), anyway.

A few teams of late have been in financial difficulties, and legal difficulties. The original plan, I believe, was for you to stay with LCR in 2016, but rumours suggest the team might go to a one-rider affair, presumably leaving you on the outer there. Do you know exactly where you will be in 2016? Or is it just which ever machine HRC decide to put you on?

I have got no idea, I will be with my crew somwehere, exactly where that is I have no idea, could be anywhere. I would like to stay with Lucio, but what ever plan Honda has for me, we will take it.

A few people criticised you for making the big jump straight from Moto3 to MotoGP.  But Alex Marquez is struggling with the adpation to Moto2 anyway, he only has a couple more points in Moto2 to his name than what you have scored in MotoGP. Are you a bit surprised how hard he is finding the switch to Moto2?

I knew he would, it is his riding style, he will need a few years to adapt but in the near future I think he will be going alright. Just taking him a little time to warm up, while Rins has shown he can adapt, and that’s why Rins is on form.

Are you surprised to be ahead of Nicky Hayden, an ex World Champion, on exactly the same spec’ of bike as what the American is on?

We set our goals at the start of the year to be the first open Honda, and we have done that so far, and we’re still third in the open championship overall. But the bike has a lot more potential in it, so I am sure we can improve more.

Are HRC happy with your progress?

They would obviously like me to get inside the top ten consistently, and I hope to get there, we’ll get there eventually, hopefully.

So what is the next step you need to take, just to get that little bit more speed to be sneaking inside that top ten?

It is to do with me and how I am working with the bike, I have got to learn more and adapt my approach on how to ride this thing, ride it correctly.

When you are on the track and around Marquez or Rossi, is there anything you try and pick up, technique wise, from those guys, and the other aliens on the track?

Of course, any chance I can get behind those guys it is all about learning. I am there trying to gauge what they are doing, and what I am doing differently. Trying to work out how I can better my approach.

Those guys look to attack the corner entry so hard that their almost at the point of crashing, really stepping over that limit all the time, so I guess that is the level of comitment required?

Actually, my entry is really good, similar to Marc in fact, so I have got great entry speed I just can’t get my exits right, I spin too much. A few bits and pieces like that that I have to try and get better at. But on entry there are no real problems, I am squashing the tyre and using good brake force, not a problem.

That’s great, anecdotally that seems to be the hardest thing riders find when getting on a MotoGP bike, trying to get that front to work on entry hard enough for the tyre and bike package to really come together.

Exactly, the guys that come from Superbike generally really struggle with that, but it was the first thing we got on top of really.

Who has been the most important person in season 2015 in getting you this far?

Definitely Cristian Gabbarini (Casey Stoner’s previous crew chief, who took working with Jack over an opportunity to work with Scott Redding this year, and also knocked back approaches from Jorge Lorenzo to crew chief his side of the garage in season 2015), Cristian has helped me so much and is a great role model. Without him I think I might be in trouble.

So for us followers here in Australia, we look forward to seeing you in action at the Australian MotoGP, and I presume you are in for the Troy Bayliss Classic again in January?

For sure, I love the Troy Bayliss Classic, and really look forward to it.  Phillip Island of course as well, can’t wait to screw the throttle on around there on the MotoGP bike.

Thanks for the chat Jack, we look forward to following your progress on MCNews.com.au as the season progresses.

Thanks Trev, I look forward to seeing you at Phillip Island.

Thanks to FoxSports for arranging the time with Jack Miller

Every free practice, qualifying session and championship race of the 2015 MotoGP season LIVE in HD on FOX SPORTS 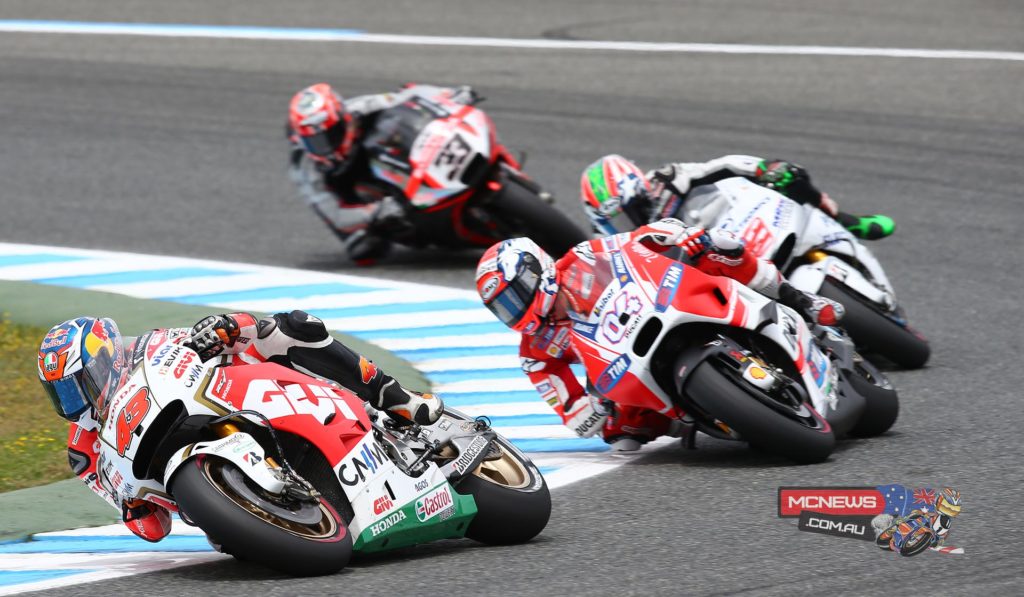