Moto News Weekly | GNCC | SX is back | Reed to KTM

by Trev
in Australian Pro MX, Enduro / Rally, Motorcycle News, Motorcycle Racing, Supercross
A A
Share on FacebookShare on TwitterShare

GNCC was back in action in Georgia on the weekend and KTM’s Kailub Russell came out on top with a narrow four-second win over Josh Strang in round four of the series to extend his championship lead to 28-points ahead of the Kawasaki mounted Aussie.

Becca Sheets got the better of Aussie Tayla Jones for the win in the Women’s Division.

This picture doesn’t say so, but she was dusty yesterday!! Happy to come away with another 2nd place, got close to the lead but not close enough. I enjoyed the race even though it was fairly difficult with both the heat and dust! Seemed to be a lot of ‘family’ in the woods getting me going and I appreciate that! @teambabbitts @racekawasaki @monsterenergy @procircuit78 @xbrandgoggles @flyracingusa @throttle_syndicate @maurer44 @faroffroad 📸 @shanyphoto

Rescheduled from earlier in the year due to COVID-19, the 2020 championships will now be hosted by Team Hogan (land owners), and the Keyneton MCC who are six-time runners of the championships, along with Trials SA.

The 2020 Australian Trial Championships will offer competition in all classes and provide on-site camping for the weekend.

Also returning in 2020 is the Mini Trial, a support class on a shortened course of 10 sections, with 3 laps each day – for all riders aged 4 to 9-years-old on mini wheeled bikes.

Entries are expected to open on July 1 and remain open until August 31, to give everyone around the country as much time as possible to plan their trip, dependent on travel restrictions.

MA Calls For EOI To Promote The 2021 Australian Motocross Championship

Motorcycling Australia (MA) is calling for expressions of interest from suitably qualified promoters and clubs who are interested in organising and running the 2021 Australian Motocross Championship.

The Australian Motocross Championship is the nation’s blue-ribbon MX series and has continued to produce some of the world’s best MX riders over many years.

The closing date for these applications is Friday, June 26, 2020.

Upon receipt of your Expression of Interest, MA will engage with you further on the specific championship requirements.

Chad Reed recently participated in an Instagram chat with Pro Circuit where he detailed how the KTM switch unfolded.

“I was told that we were done until September-October. So basically, I was just getting a motorcycle that I wanted to ride for the summer. Mountain Motorsports is a dealer for everyone and kind of like for me at this point in my career it gives me a fun opportunity to ride some bikes. I loved my Husky when I rode it, and you know so I was just kind of doing it for a little bit of fun. One thing led to another, I really enjoyed the bike, I liked it, then I got the word we were going back racing and I had already sold all my bikes.

“But really, to answer the question, I enjoyed it. I loved the brakes, transmission, how light it is, all the things you want from a race bike at the highest level, this bike comes like that production, so it’s just a great starting point. The one thing I struggled with most when I rode my Husky, a lot of people want to know that question, I didn’t have the resources back then with the time that we had, to have access to the good WP suspension. This time around I have been lucky enough to have access to that and that has played such a huge role, working with a company that the bike is built around. So far so good, I really like it. It brings back some fun memories, a lot of the things you do to improve certain feelings, you are going back 15/16 years to my steel chassis days, so it’s funny to have all that stuff in the back of your memory bank and a lot of that still works.”

Reed also went into some of his favoured accomplishments and the whole two-stroke v four-stroke thing, you can listen to the whole interview below.

SX is back late this month

Supercross is gets back underway late this month after its COVID-19 enforced hiatus.

The series will resume on May 31 and will run through a June 21 conclusion.

The last race was held at Daytona in early March so when the gates drop in Salt Lake City on May 31 it would have been almost three months since riders felt the heat of competition.

This fast conclusion to the season will see seven quick-fire rounds ran over the space of only three weeks running two events per week, one on a Wednesday and another on the Sunday.

The events will all run without spectators making the events a distinctly made for TV affair and every round will take place inside Rice-Eccles Stadium in Sat Lake City, Utah.

Each round will have only one main event race. 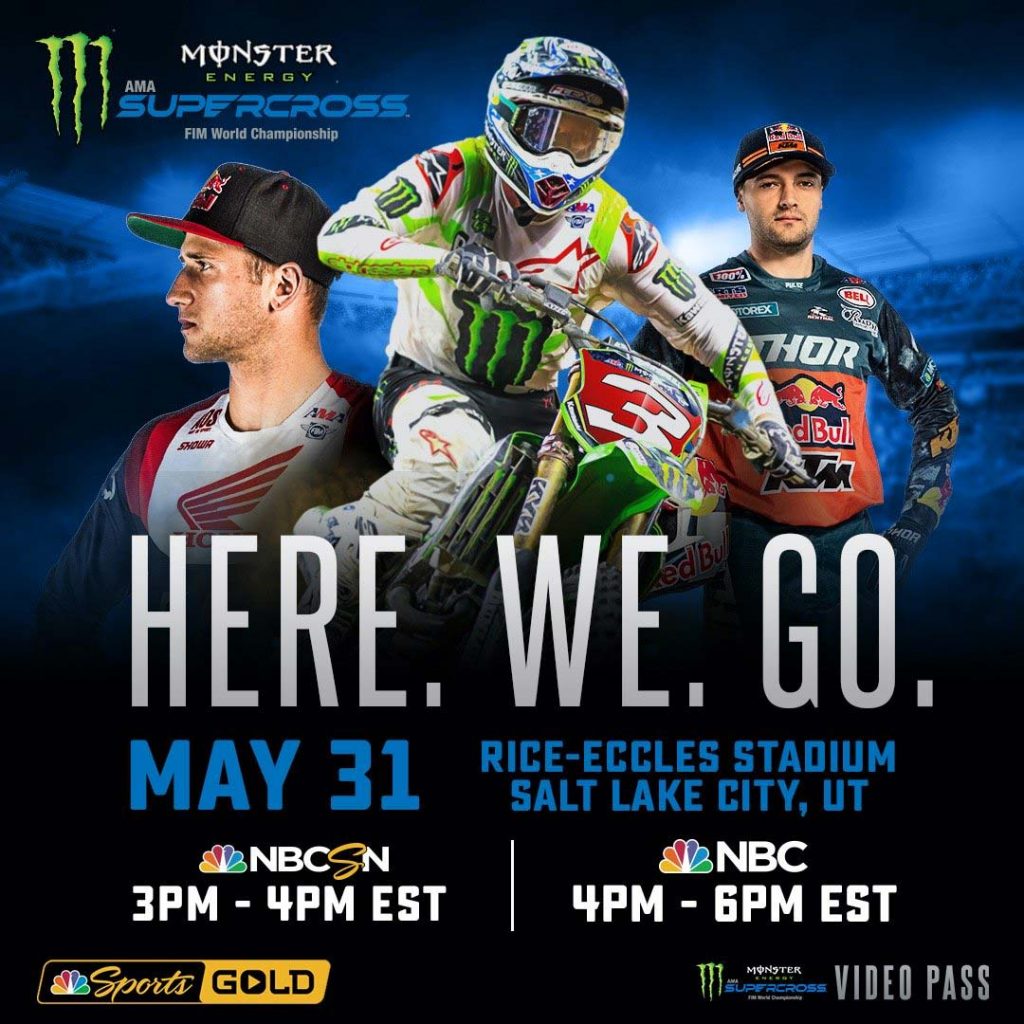 “We are so happy to finally have this plan in place. We started feeling pretty bored after being off for this long without racing and now there is a sensation of life and energy again. And, it is cool for Supercross to be one of the first professional sports back!”